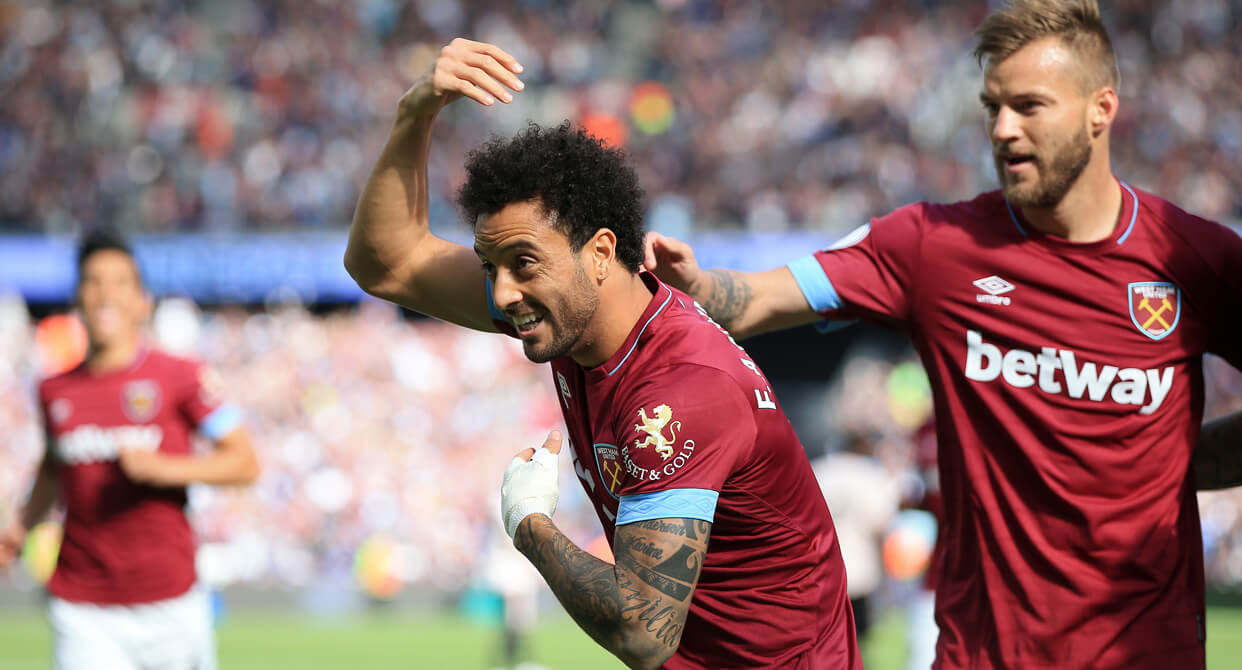 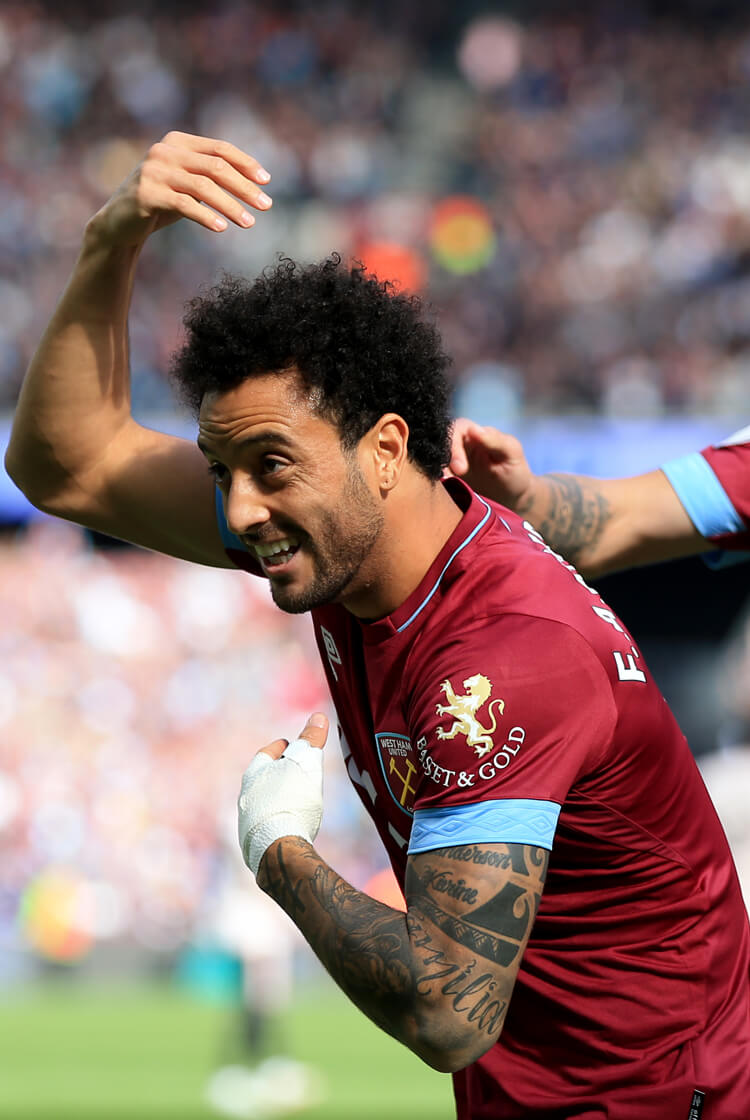 Manuel Pellegrini is beginning to deliver on his promise of bringing stylish, attacking football to the London Stadium, as his players eased to victory over Jose Mourinho’s star-studded Manchester United side in a polished performance. Felipe Anderson, opening his account for the club, scored the first with a clever backheel in the fifth minute, before Victor Lindelof deflected Andriy Yarmolenko’s strike into his own goal to send the Hammers into half-time with a two-goal lead. Marcus Rashford did grab one back midway through the second half, but minutes later Mark Noble capitalised on a huge gap in United’s back line to play in Marko Arnautovic, who made no mistake in restoring the two-goal cushion. West Ham seem to have found their feet under Pellegrini, while the pressure is really starting to mount on Mourinho. 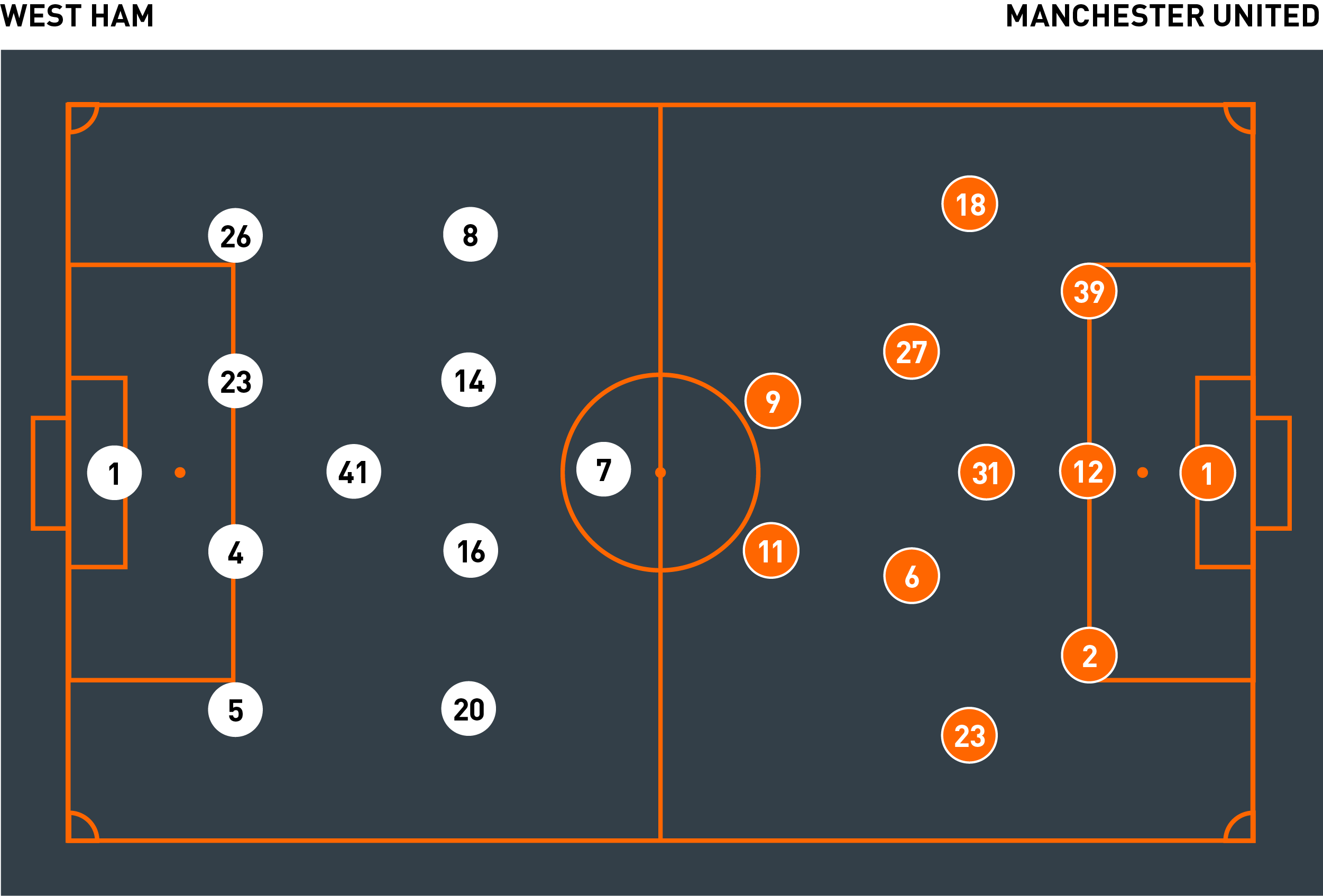 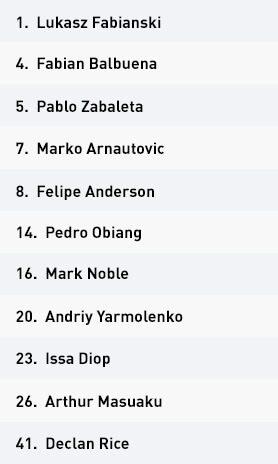 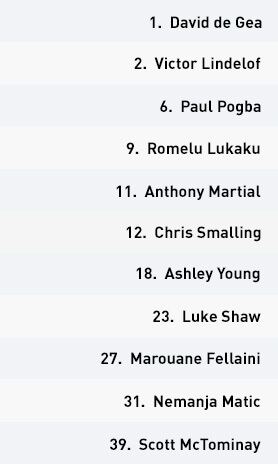 West Ham alternated between a 4-1-4-1 and a 4-3-3 formation in possession, with Declan Rice positioned just behind Mark Noble and Pedro Obiang centrally. Andriy Yarmolenko and Felipe Anderson supported both the midfield and Marko Arnautovic in attack.

Manuel Pellegrini’s players began by focusing on their opponents’ left – here, the relationship between Pablo Zabaleta, Noble, Yarmolenko and Arnautovic was key. Noble allowed Zabaleta to push higher by operating as a false full-back, which in turn prompted Yarmolenko to move inside. If Manchester United left wing-back Luke Shaw moved towards Zabaleta, the ball would move inside to Yarmolenko, who would then look for Zabaleta on the outside; if Shaw stayed with Yarmolenko or held his position, the ball would go into Zabaleta’s feet. If Zabaleta and Yarmolenko were on the same vertical line, Arnautovic would drop into midfield and receive to feet, where he could move the ball outside to Yarmolenko and Zabaleta could provide the overlap. These relationships were particularly evident in the build-up to West Ham’s first goal, but they were a constant threat to United throughout the game.

With a two-goal lead to protect in the second half, the Hammers stayed much deeper and looked to hurt United on the counter-attack. The visitors’ switch in formation to a 4-4-1-1 reduced their security at the back, and Arnautovic was able to exploit the increased space that was now available to him – as he did with remarkable ease for the third goal.

West Ham remained in their 4-1-4-1 structure out of possession, swapping between a mid and low block for the majority of the game. Rice would patrol the areas between the lines, while the midfield four of Yarmolenko, Noble, Obiang and Anderson would protect the width of the pitch, displaying an outstanding level of work rate and organisation in doing so. They typically defended in pairs – Yarmolenko and Noble, Noble and Obiang, Obiang and Anderson – but would also receive support from their full-backs when the ball went wide. As United posed few numerical problems, they were even easier to deal with for West Ham, who often had a 10-against-7 overload in their defensive third.

The hosts tended to match United man-to-man in midfield, with Noble on Paul Pogba, Obiang on Nemanja Matic and Anderson on Marouane Fellaini. Yarmolenko could also pick up Shaw, and if the ball was moved back towards their left side, each player could move across, with Anderson and Arthur Masuaku picking up right-back Ashley Young.

The Hammers were fully deserving of their three points, and after a terrible start to the campaign are finding form under the guidance of experienced coach Pellegrini. Seven points from their last three games – with four of those coming against Chelsea and United – suggests the new brand of football desired by all at the club is finally coming to fruition.

Manchester United set up in a 3-5-2 in possession, with Ashley Young, Marouane Fellaini, Nemanja Matic, Paul Pogba and Luke Shaw across the midfield. Anthony Martial partnered Romelu Lukaku in attack.

United favoured attacking down their right-hand side, with Martial’s dropping into the number 10 position acting as the trigger for wing-back Young to make forward runs out wide. They tried to combine to create crossing opportunities from this area – this approach contributed to their best chances in the game.

In the first half especially, however, they were notably inefficient in possession of the ball. The three central defenders regularly stayed back to deal with Marko Arnautovic, but this only neutralised the overload that should have been in their favour with a midfield five. What’s more, when Martial dropped in to assist the midfielders and Young didn’t advance, Lukaku would be isolated against the hosts’ back four. While this improved when Scott McTominay and Victor Lindelof started to bring the ball out and commit West Ham midfielders, the players they had positioned between the lines didn’t really suit this type of football. The introduction of Juan Mata and Fred for the final 20 minutes should have helped in this respect, but West Ham’s third goal killed off any real possibility of a comeback.

United operated in a 5-3-2 out of possession, with Shaw and Young tucking in to make a back line of five. They utilised a mid to low block for large parts of the first half, which resulted in West Ham being afforded a large amount of possession. The main issue for the visitors, though, was that transitioning to an in-possession structure from such a deep position made it too difficult for United to sustain any real quality phases of possession.

They reacted in the second half by switching to a 4-4-1-1 out of possession, with Fellaini locking on to whoever of Declan Rice and Mark Noble was the deeper, Martial and Rashford picking up the full-backs, and Pogba and Matic picking up the other two central midfielders. Here, though, they struggled to react to the movement of Andriy Yarmolenko and Felipe Anderson, who could drop into the half-spaces and pockets off the top line. If Shaw and Young chose to go with the wide pair, the line became disjointed; if the whole line moved up, space was created in behind; and if they left the runners, attacking players could get on the ball in advanced areas.

This was a worryingly poor performance from United, with Jose Mourinho’s players looking almost uninterested in the battle after conceding the first in the opening five minutes. The defeat makes it their worst start in Premier League history, as they drift further down the table and lose further ground on the teams they are expected to be challenging for the title.