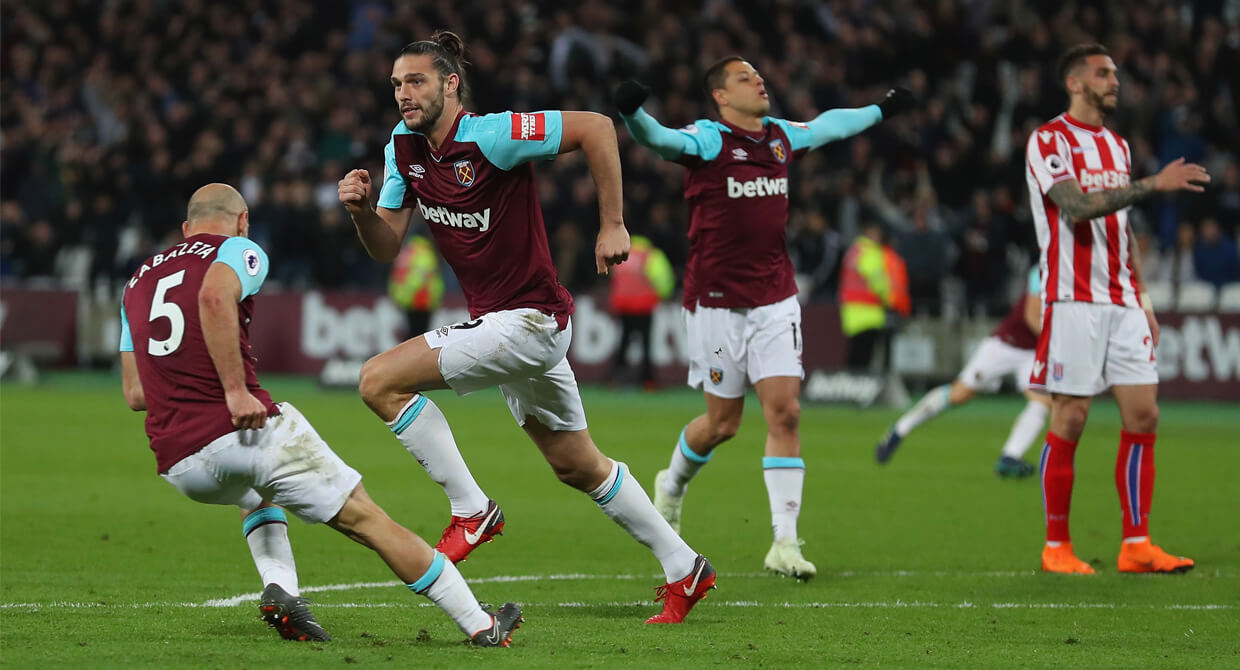 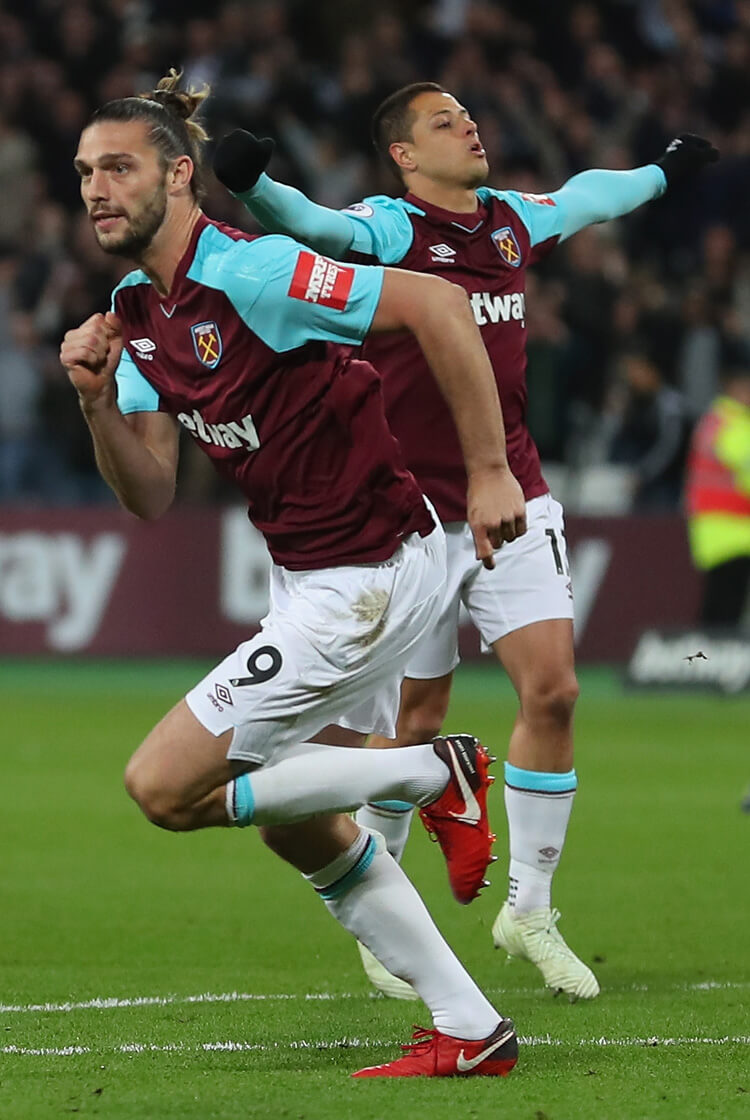 Andy Carroll scored a dramatic late equaliser to rescue a point for West Ham against a Stoke City team closing in on relegation from the Premier League. An uninspired meeting at the London Stadium came to life in the second half, with substitutes Peter Crouch and Carroll both coming off the bench to score. A mistake from West Ham goalkeeper Joe Hart gifted Crouch his fourth domestic goal of the campaign, and what looked to be the winner. Carroll, though, struck at the death to leave the Potters in increased danger of losing their top-flight status. 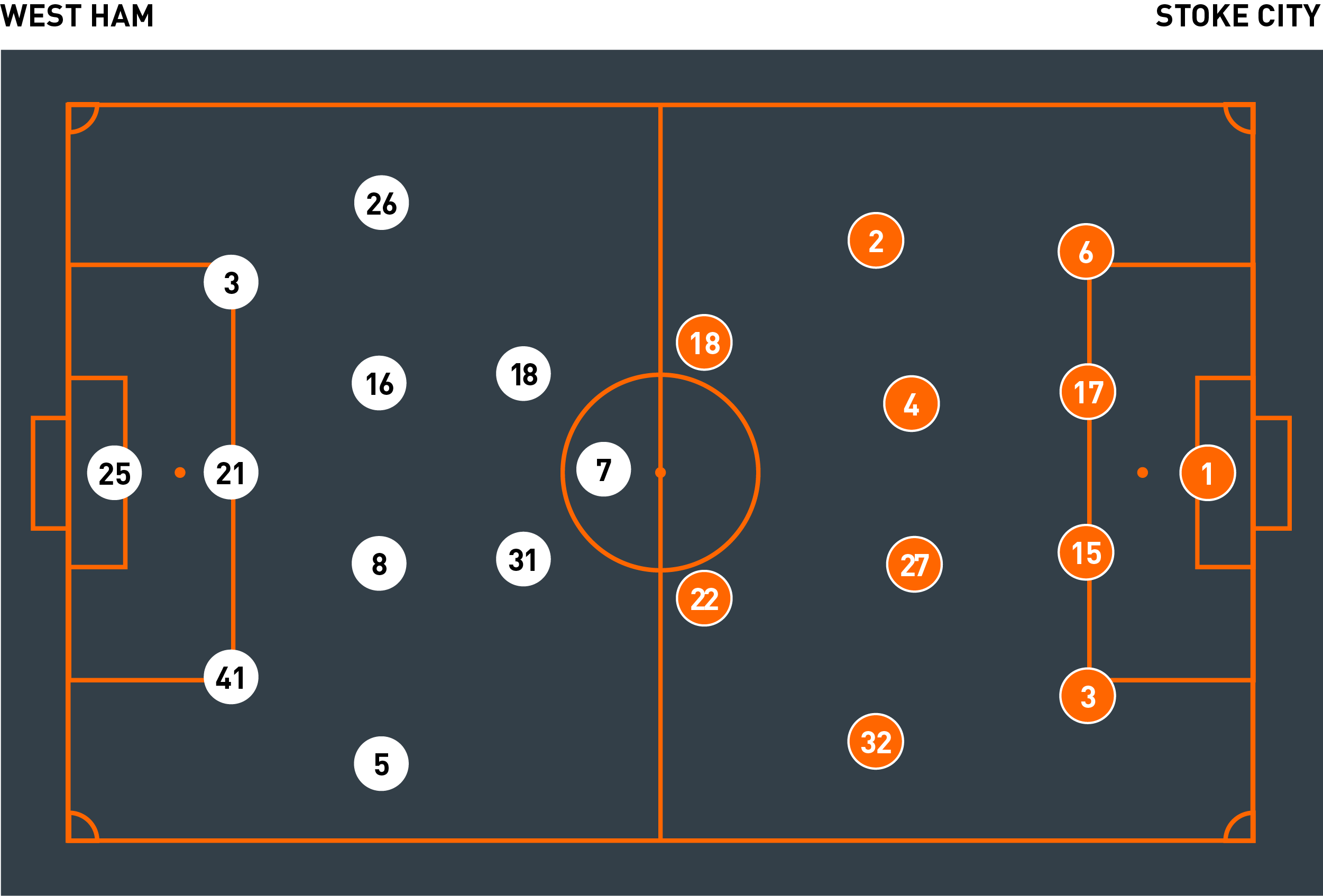 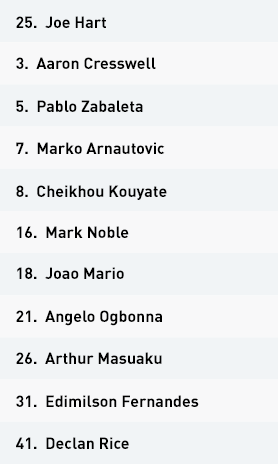 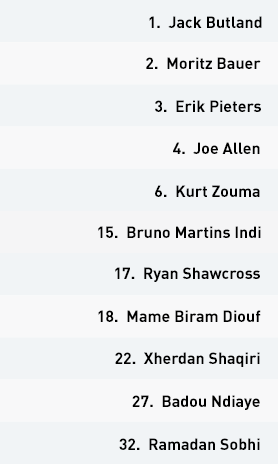 The home side started well, looking to play direct vertical passes either through or over Stoke City’s back line. They had consistent width in possession, which Stoke's midfield four struggled to deal with. Throughout the first half, Fernandes dropped deep, adding a fifth player to West Ham’s midfield unit. Stoke's midfield was often overran as a result, with Zabaleta often having time and space to overlap into the final third.

The Argentinian was a constant threat, firing frequent crosses into the penalty area. However, as Fernandes had dropped deep during the build-up, only Arnautovic and Joao Mario were available to attack the crosses. Despite late runs from midfield from Cheikhou Kouyate, West Ham couldn't take advantage of their midfield overload.

During the second half, Aaron Cresswell drove out of the back three, providing a crossing threat from the left, in addition to Zabaleta on the right. This enabled Masuaku to move infield as an additional central attacker within Stoke’s penalty area. But while West Ham had more bodies in the penalty area, they lacked an aggressive aerial threat, as the visitors' centre-backs, Ryan Shawcross and Bruno Martins Indi, dealt with the majority of incoming crosses with ease.

The introduction of Javier Hernandez added a more direct threat to Stoke’s goal. The acceleration and agility of Hernandez also increased the potency of the home side’s attacking transitions. Even with the pace of this new-look West Ham attack, however, Stoke often recovered in numbers. The Hammers were resigned to building in wide areas, still trying to penetrate with fizzing crosses from Cresswell on the left.

It took until the dying moments – and the introduction of Andy Carroll – for West Ham to finally convert from a Cresswell cross. The towering Carroll provided the height and aggression that Cresswell and West Ham had been craving, swinging a well-timed volley low past Jack Butland to dramatically deny Stoke a precious away win. After so many deliveries into the Stoke area, West Ham finally got their reward and grabbed a deserved point.

The away side struggled in possession, as West Ham often converted into a midfield five. With Stoke’s well-organised yet technically uninspiring midfield, they resorted to direct aerial passes, bypassing both sets of midfield units altogether.

Shaqiri dropped deeper and deeper as the first half wore on, in an attempt to get on the ball. This isolated Diouf against West Ham’s back three, however; even if he managed to win the first ball, it wasn't long before the home defenders recovered possession.

With Shaqiri dropping deeper, this enabled forward runs of support from Ramadan Sobhi and Moritz Bauer in midfield. The visitors looked to continue with aerial passes towards Diouf, but they now had additional supporting runners ready to pounce on any second ball or knockdown.

During the second half, Stoke continued to build using direct counter-attacks, but they altered their style slightly from the opening 45 minutes. Instead of using aerial passes over the West Ham defence, the Stoke midfielders preferred through balls along the ground. With Sobhi and Bauer continuing their forward runs, Stoke penetrated West Ham’s back three, with Diouf wasting their only clear chance of the match.

Manager Paul Lambert introduced the aerially dominant Peter Crouch, moving Shaqiri to the right of midfield in the process. This enabled the latter to receive the ball much higher up the pitch, and consequently closer to West Ham’s goal. With a renewed sense of confidence and purpose, he drove at West Ham’s defence, cutting inside and testing Joe Hart from distance. What should have been a routine save turned into a chaotic scramble, with Crouch on hand to tap the ball home for what looked like a potentially season-defining away win.

Stoke had to deal with huge pressure late on, as the home side made attacking changes. With only minutes left, their defence failed to deal with a cross from wide left, and Andy Carroll volleyed home past Jack Butland. Despite defending resiliently throughout, the away side conceded late and threw away what could have been their most valuable three points of the season.

During West Ham’s build, Fernandes regularly dropped short into the midfield unit. This created a five against four overload for the home side, as they looked to take control of the game early on. Pablo Zabaleta benefited from Fernandes’ movements, as he had space in which to overlap and cross into Stoke’s penalty area. West Ham lacked aerial presence from these crossing deliveries, however.

With Xherdan Shaqiri also performing similar dropping movements into the Stoke midfield, West Ham lost their overload in the second half. Aaron Cresswell thus surged forward from the defensive back line, providing powerful crosses from the left side to add to Zabaleta’s crosses from the right.

Despite their dominance in wide areas, it took until the final moments of the match for West Ham to take advantage. Andy Carroll came off the bench to grab a last-gasp equaliser to seal a point for the home side.