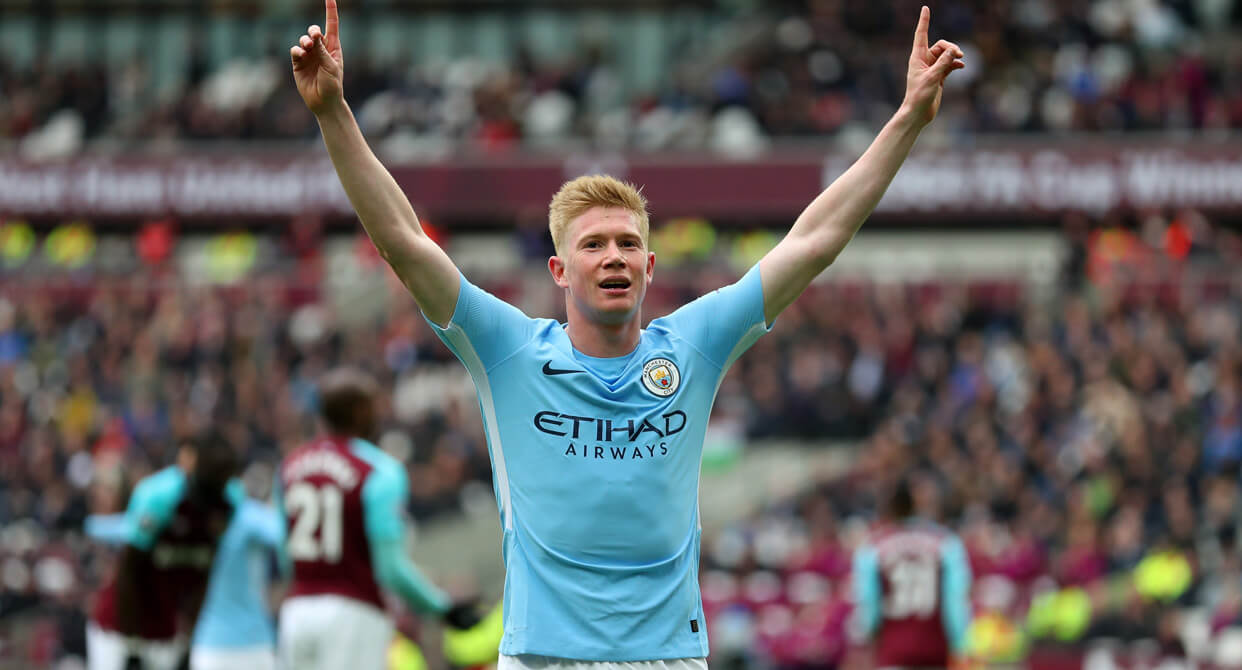 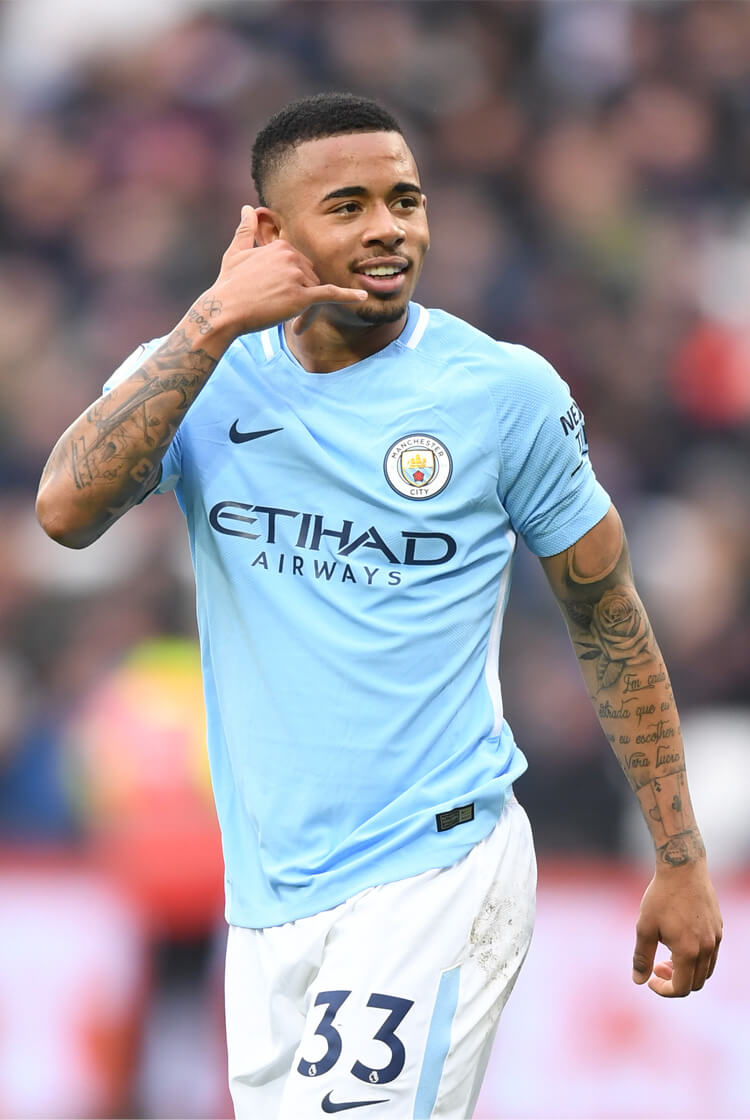 Manchester City surpassed 100 goals for the season in this Premier League stroll over struggling West Ham at the London Stadium. The champions are on 93 points, 16 ahead of Manchester United in second place, and have refused to let up in front of goal since securing the title. A deflected Leroy Sane strike and an own goal from former City defender Pablo Zabaleta gave the visitors breathing space, with Aaron Cresswell's free-kick just before half-time offering only short-lived hope for the hosts before Gabriel Jesus and Fernandinho completed the rout in the second half. The Hammers are yet to secure their top-flight status, as they sit worryingly close to the drop zone. Here, our professional coaches analyse the tactics and key moments from City's win – and assess what went wrong for David Moyes and West Ham. 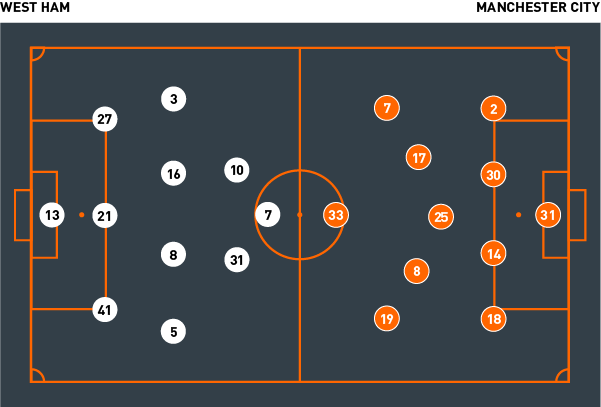 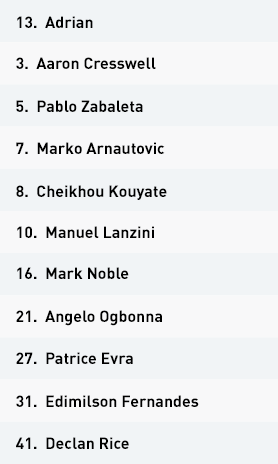 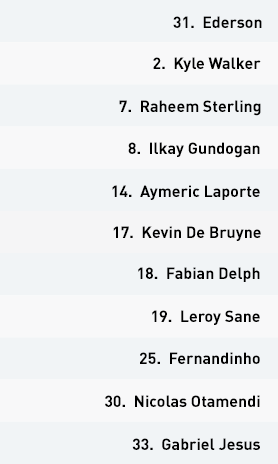 West Ham lined up in a 3-4-3 system, although this was most often a 5-4-1, as they naturally fell in to a low block. They struggled to cope with the fluidity of Manchester City’s movement and dominance in possession early on.

Several times in the first stages of the game, West Ham tried to step higher on their opponents. This was unsuccessful, as Leroy Sane and Raheem Sterling would stay high and wide to stretch the back line. With Ilkay Gundogan and Kevin De Bruyne creating an overload in midfield, passing lines would open to the pair when Mark Noble or Cheikhou Kouyate stepped up to Fernandinho.

West Ham consequently remained low and found it hard to transition into counter-attacks. When they did enjoy rare success, Fabian Delph was particularly vulnerable in an inverted full-back role, sometimes leaving space in behind. They exploited this space once to good effect, and there was brief hope for the hosts when Aaron Cresswell curled in a free-kick shortly before half-time to make it 2-1.

But the second half took a similar theme, with City reasserting their dominance. Marko Arnautovic constantly attempted to get in behind on quick transitions; however, City’s counter-pressing didn’t allow West Ham to find enough passes to get into an attacking shape. Direct balls became their main outlet.

Cresswell’s afternoon became increasingly difficult, with the Hammers left-back frequently getting exposed by the pace of Sterling in one-versus-one situations. Sterling created a number of chances from the right-hand side, including both goals in the second half.

The fourth goal came after Mark Noble tried to find a short passing option to Manuel Lanzini, but quick City pressure resulted in Fernandinho winning the ball and transitioning to a counter-attack, four on two.

David Moyes made changes in personnel at 4-1 down, introducing Joao Mario, Javier Hernandez and Arthur Masuaku – but to little avail. City’s authority didn’t dwindle, and West Ham continued to be pushed lower in the field. City expertly blended the ability to keep the ball with frustrating their opponents by drawing them out and exploiting the space to comfortably see out the win.

Manchester City set up in a 4-3-3 system, making four changes from the win over Swansea. Fabian Delph, Fernandinho, Leroy Sane and Kyle Walker returned to the starting line-up.

City took immediate, direct control of the game. Delph played as an inverted full-back, moving inside to create a double pivot with Fernandinho – which allowed Ilkay Gundogan and Kevin De Bruyne to play higher.

Raheem Sterling initially started on the right wing – but, similarly to Delph, he moved inside when De Bruyne dropped, leaving width and space into which Kyle Walker could break forward. Leading up to the first goal, however, Sterling and Sane switched sides, and the latter cut inside to score from a deflected shot.

A variety in attacks proved problematic for West Ham. City would exploit the Hammers’ high line with runs in behind from Sterling, or play through the lines to create opportunities in wide areas. De Bruyne exploited this space when his cross was turned in for an own goal by Pablo Zabaleta to double the lead.

City’s counter-pressing was effective for the most part – but Delph was at times a weak link. When Sane was positioned high and West Ham switched the play to Zabaleta, Delph was drawn higher to press, creating space in behind for Edimilson Fernandes to take advantage of. West Ham capitalised on this in the build-up that led to Aaron Cresswell scoring from a free-kick just before half-time.

The away side’s dominance continued in the second half, though. The combination of Gundogan, De Bruyne and Fernandinho in the pockets created triangles with wingers Sane and Sterling. With this, they could play quick, short passes and open up the West Ham defence.

Cresswell particularly struggled when getting exposed by Sterling in one-versus-one situations. City often drew in the West Ham players with short central passing, before passing out wide to expose the wing-backs. This was effective when Sterling assisted Gabriel Jesus for the visitors’ third goal.

Their fourth goal, meanwhile, came from intense pressing. A short pass to Manuel Lanzini from Mark Noble acted as the trigger for City to win the ball back centrally and quickly transition to a four-versus-two. Sterling again set up the finish, this time for Fernandinho.

This was a match that City completely controlled. Aside from the occasional opportunity for West Ham to exploit rare moments of loose pressing, Pep Guardiola and his team were dominant throughout.

Manchester City had total control of this game from kick-off. They controlled possession and displayed flexibility in their attacking game, often creating superior numbers in central areas of the pitch. They counterpressed well and, for the most part, prevented meaningful counter-attacks from West Ham.

On the rare occasions City pressed their opponents loosely, West Ham could switch the play to Pablo Zabaleta. Fabian Delph would step up to press, leaving space behind him to exploit. This, though, was a rarity – and the Hammers only capitalised once in the first half.

West Ham tightened their central block in the second half and remained low, but City created a number of opportunities in wide areas. When isolated one on one, Aaron Cresswell struggled against Raheem Sterling, who assisted both the third and fourth goals.