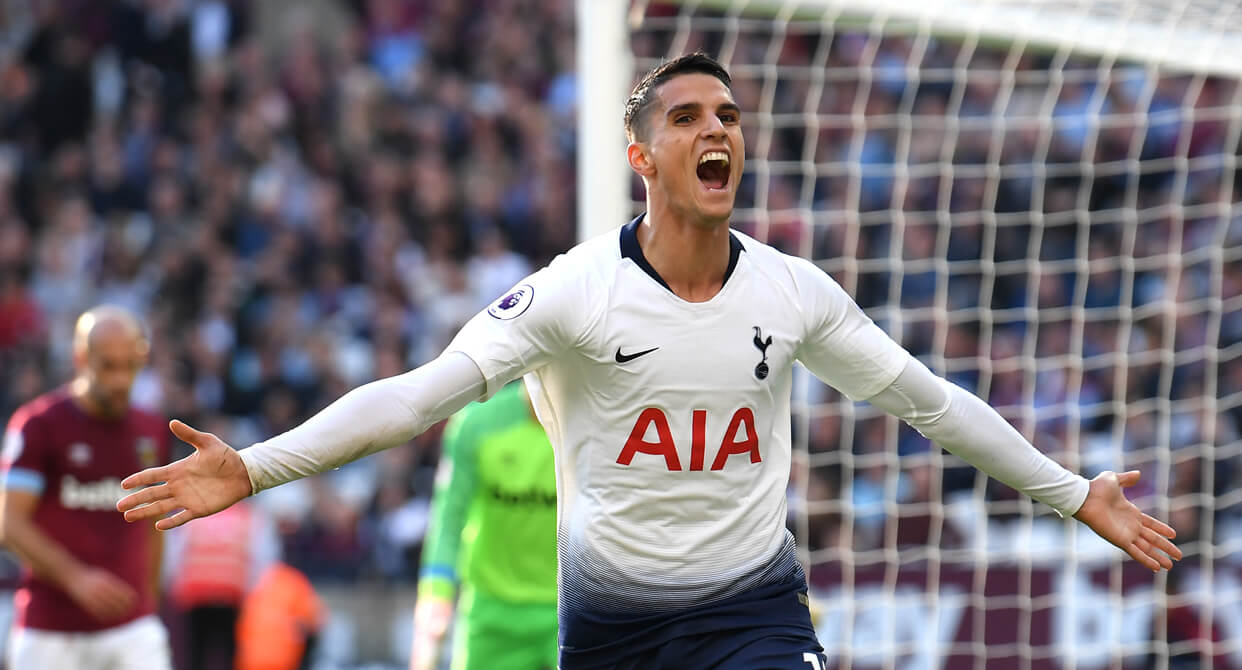 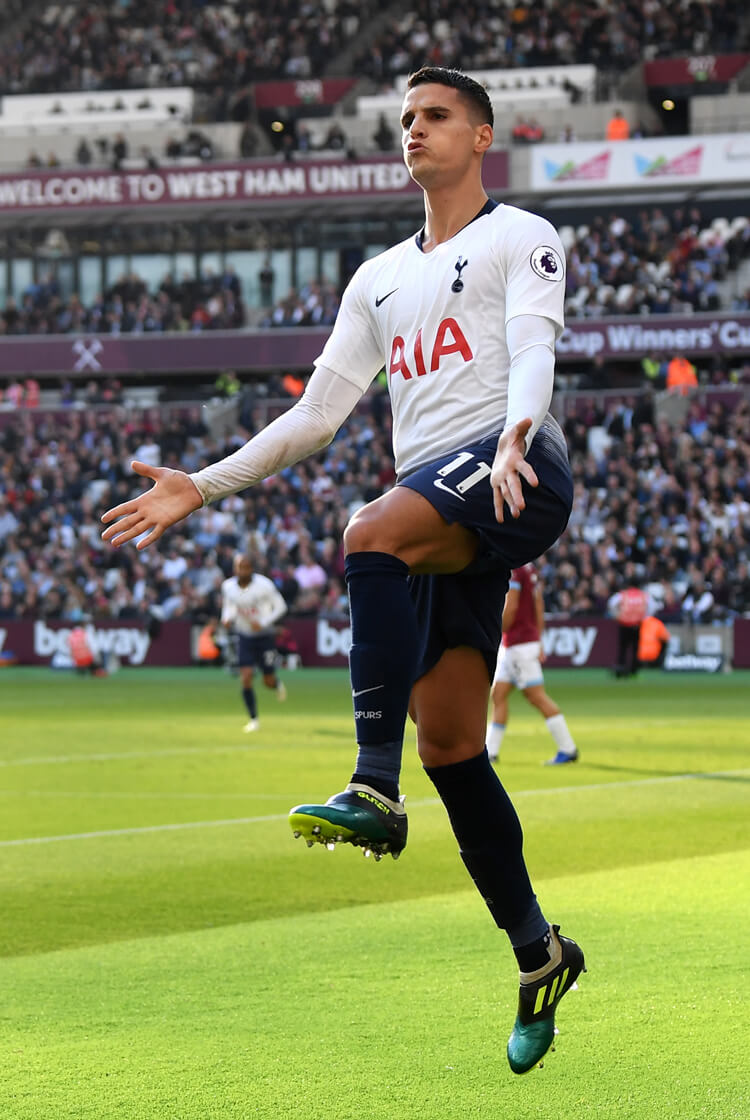 Erik Lamela scored the only goal of the game at the London Stadium, as Tottenham secured a narrow victory over West Ham to extend their winning run in the Premier League to four. Lamela headed home a cross from Moussa Sissoko at the end of the first half, and Spurs held on in the second to take home the three points. The Hammers pushed for an equaliser, but couldn’t find a way past the excellent Hugo Lloris in between the posts. Following Arsenal’s victory over Leicester, the result leaves Tottenham in fifth, level on 21 points with the Gunners and Chelsea. 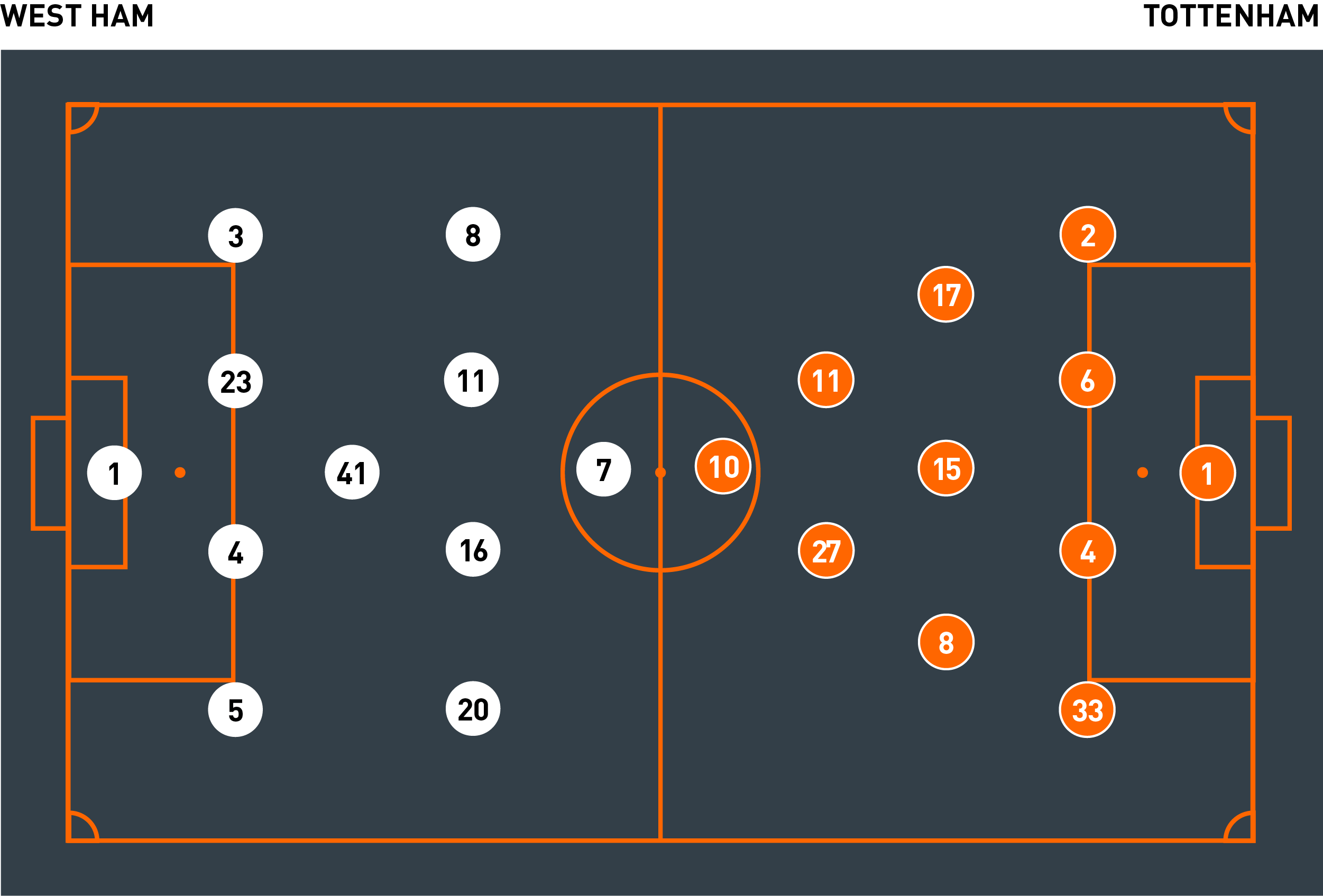 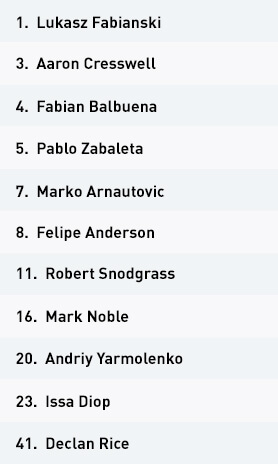 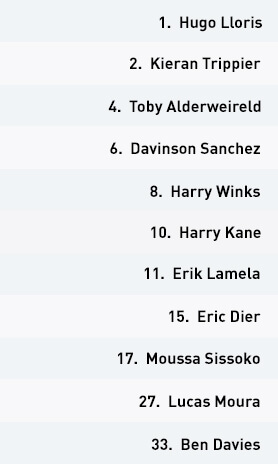 West Ham set up in a 4-1-4-1 formation, with Declan Rice in between the defence and midfield. Andriy Yarmolenko, Mark Noble, Robert Snodgrass and Felipe Anderson completed the midfield behind Marko Arnautovic in attack.

The middle of the pitch was extremely congested throughout, with both teams packing the area with numbers when out of possession. This meant West Ham were somewhat limited to the wide areas, and thus focused their efforts on trying to exploit the space in behind the Tottenham centre-back and full-back on both sides.

To do so, Arnautovic would make early runs between Toby Alderweireld and Ben Davies, or Snodgrass would make later, deeper runs between Kieran Trippier and Davinson Sanchez. The trigger for this movement was the ball being sent wide to a player positioned near the touchline – most often one of the full-backs, but occasionally Yarmolenko or Anderson. West Ham created a few chances from this strategy, but it tended to be from penetrative runs behind the full-backs and crosses into the box.

West Ham remained in their 4-1-4-1 structure out of possession and tried to protect the centre of the pitch as much as possible, maintaining a very compact shape. Rice was tasked with picking up the Tottenham players drifting between the lines; the midfield four shifted between a flat shape, in which they would remain close together, and a trapezium-type shape where Noble and Snodgrass would be on a similar horizontal line but eight to 10 yards ahead of Yarmolenko and Anderson, who would be outside the central two but deeper.

With this, any passes that Tottenham played out wide to their advancing full-backs wouldn’t take West Ham’s wider midfield players out of the game. In fact, it would mean that the West Ham full-backs could engage with their wide opponent, and Yarmolenko and Anderson would not have too much distance to travel to cover their full-backs inside, as they were already positioned reasonably deep and in the half-spaces.

Tottenham set up in a 4-3-2-1 shape in possession, with Erik Lamela and Lucas Moura playing as an attacking midfield pair just behind Harry Kane in attack. Moussa Sissoko, Eric Dier and Harry Winks provided the security and balance in midfield.

The natural width in Spurs’ formation came from full-backs Kieran Trippier and Ben Davies, who had much more licence to get forward due to the security provided by the deep-lying midfield three. In effect, their structure would often take the shape of a 2-3-4-1, with Davies and Trippier playing as high up as Lamela and Moura.

Spurs displayed two main methods of attack. One was to get Moura on the ball and have him drive at the West Ham defence – but the central areas were so congested that the Brazilian generally ended up running into dead ends. The other approach was to use the wide areas, which were the only parts of the pitch that offered any reasonable space. Spurs chose to operate outside the West Ham full-backs, and use their own full-backs on the touchlines to provide maximum width.

Despite this, chances were still limited, and they managed only three shots on target throughout the game. Fortunately, one of these efforts found the back of the net and was enough to seal the three points.

Out of possession, Spurs shifted between a mid to high press and a mid-block. When they operated in a mid-block, it would take on the form of a 4-4-2 – Moura would drop in with the three midfielders while Lamela stayed up with Kane. During the mid-block phases, Spurs were patient and wouldn’t engage with West Ham until they came over the halfway line; otherwise, the whole block would simply shuffle across and screen passes through to the West Ham attackers, waiting for a mistake that could create an opportunity to regain and counter.

When they opted for a higher press, they would use a 4-3-2-1, with Moura and Lamela doubling up with Sissoko and Winks when the ball went wide to the West Ham full-backs. The Hammers often went direct from their goal-kicks, however, so there were few high-pressing opportunities for Tottenham beyond counter-pressing situations.