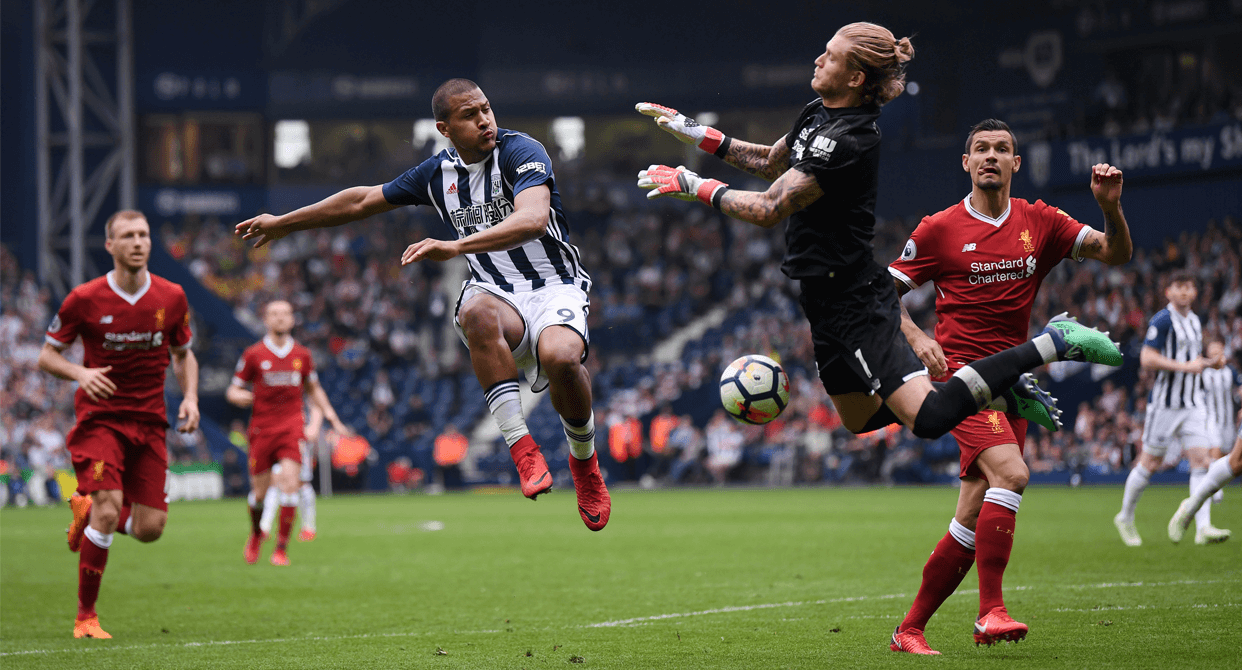 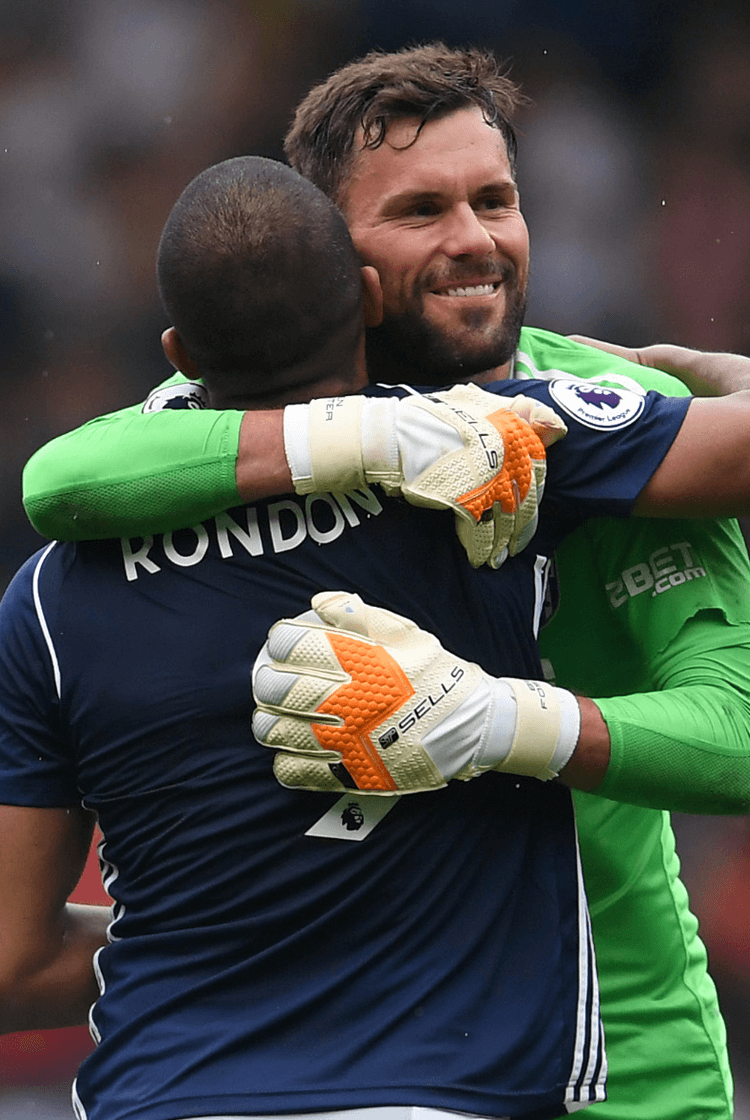 Were it not for their current predicament at the foot of the Premier League, West Brom would be widely praised for this late fightback against Liverpool. Jurgen Klopp's team were sitting comfortably with a 2-0 lead at the Hawthorns as the final 10 minutes approached, thanks to goals from Danny Ings and Mo Salah. But Jake Livermore and Salomon Rondon both scored late goals to earn a draw for the seemingly doomed Baggies, and help Darren Moore maintain his unbeaten run as caretaker manager. Relegation still looks certain, however, while Liverpool remain on course for a top-four finish despite the two dropped points. 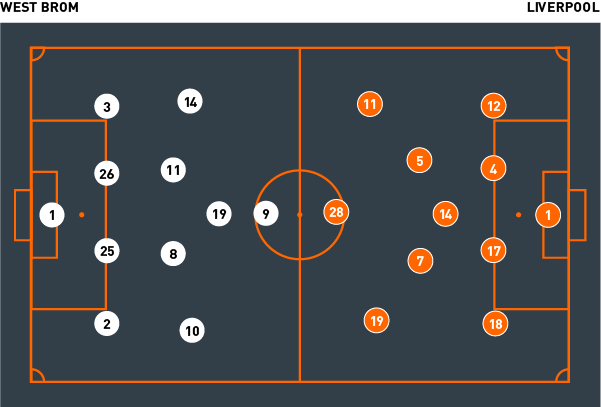 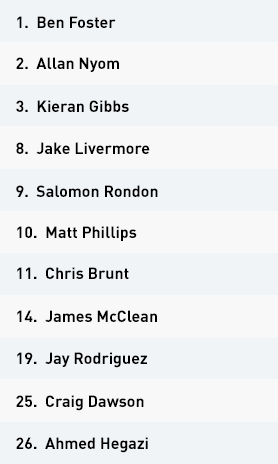 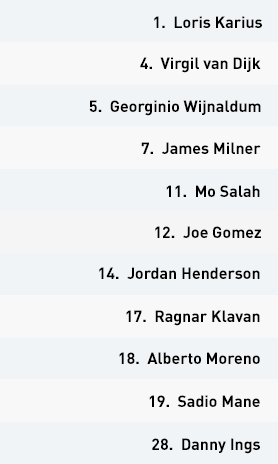 West Brom started the game in a 4-4-1-1 system, with Jay Rodriguez playing in front of the midfield four to both support lone striker Salomon Rondon and contribute defensively.

Liverpool dominated possession of the ball during the early stages, with West Brom quickly setting up a structured defence. It was clear that Rodriguez’s role was to drop on to Jordan Henderson; however, the visitors' three-man midfield were fluid in their movement and combined well with the wingers to create central overloads.

Liverpool’s Georginio Wijnaldum would often drop to receive the ball when Henderson was marked, leaving Jake Livermore or Chris Brunt to press. West Brom found it difficult to cope with the fluidity of this movement; having conceded just four minutes in, they were forced to alter their tactics.

The Baggies became more structured in their defensive shape. Instead of getting dragged out of position, the home side remained more compact, protecting the space between the lines and growing in patience. This resulted in mistakes from Liverpool in possession, which allowed West Brom to attack on the counter.

Liverpool regained control of possession in the second half, but the outlet of Matt Phillips and the strength of Rondon created opportunities offensively for West Brom. Rondon frequently targeted Liverpool centre-back Ragnar Klavan, who struggled against his man's superior strength. Phillips, meanwhile, saw success in one-versus-one scenarios against returning left-back Alberto Moreno.

After making a defensive substitution – which saw Jonny Evans replace James McClean – and conceding a second goal when Jake Livermore was caught pressing high, West Brom manager Darren Moore brought on young winger Oliver Burke to instant impact. The 21-year-old’s direct running at the Liverpool back line and combination with Phillips won his side a corner, from which Livermore grabbed a goal back.

Liverpool dropped in to a back five in the hope of holding on to the three points, which allowed West Brom to commit more players forward. The Baggies enjoyed a short period of sustained pressure, and Burke was again influential in winning the free-kick that led to their equaliser in the dying moments.

Moore went for all three points after drawing level, immediately bringing on forward Hal Robson-Kanu. Despite showing great character to get back in to the game, however, West Brom left it too late and relegation still looms.

Liverpool set up in their typical 4-3-3 system, and there was some rotation in the line-up in preparation for their Champions League semi-final encounter with Roma on Tuesday night. Joe Gomez, Alberto Moreno, Ragnar Klavan and Danny Ings were all given rare league starts.

Liverpool took immediate control of the game from kick-off, with the two central defenders, Virgil van Dijk and Ragnar Klavan, comfortable bringing the ball out from the back. West Brom responded by dropping into a 4-4-1-1 system.

It was the early movement of the midfielders that caused problems for the hosts, however. Georginio Wijnaldum would stay close to Jordan Henderson in the build-up, while James Milner would utilise the desire of Liverpool’s front three to drop deep to get on the ball and run in behind. This led to a number of set-pieces, from which Danny Ings scored only four minutes in.

The understanding between Liverpool’s midfielders and wide forwards helped to open space in which to play. Sadio Mane would often drop low to receive the ball and switch with Milner, making it difficult for West Brom to pick him up. As a result, Liverpool would always have a player taking a deep run in behind the Baggies' back line. Ings was used more as a target to occupy and move West Brom’s central defenders, creating space for Mane, Milner and Mo Salah to exploit.

The second half began similarly to the first, with Liverpool controlling possession and West Brom sitting deep. With Liverpool’s centre-backs able to move forward with the ball, West Brom’s midfielders were constantly occupied, leaving key passing lines to the forwards – particularly Salah, who frequently dropped into pockets of space.

After the home side had grabbed a goal back, however, Liverpool manager Jurgen Klopp made an interesting switch. Dejan Lovren replaced Salah in what was now a back five. This was perhaps to deal with the threat of West Brom from set-pieces, but the new 5-4-1 system actually seemed to invite pressure – which led to the free-kick from which Salomon Rondon headed in the equaliser.

The final few minutes of the game were difficult for Liverpool, as playing with a back five had seen them lose their attacking emphasis. Klopp will have been disappointed to concede two goals from set-pieces against a team that otherwise created little.

Liverpool’s movement and dominance in the midfield area was key in the opening periods of the game. West Brom got pulled out of position and had the spaces in behind them exploited on several occasions.

West Brom became more compact and patient as the first half went on, and Liverpool duly started to make a few mistakes in possession. The home side grew in confidence as a result, enjoying a few bright spells on the counter.

The home side posed problems in attack when Salomon Rondon had the opportunity to use his strength against Klavan. Matt Phillips was also able to exploit Alberto Moreno in one-on-one situations down the West Brom right.