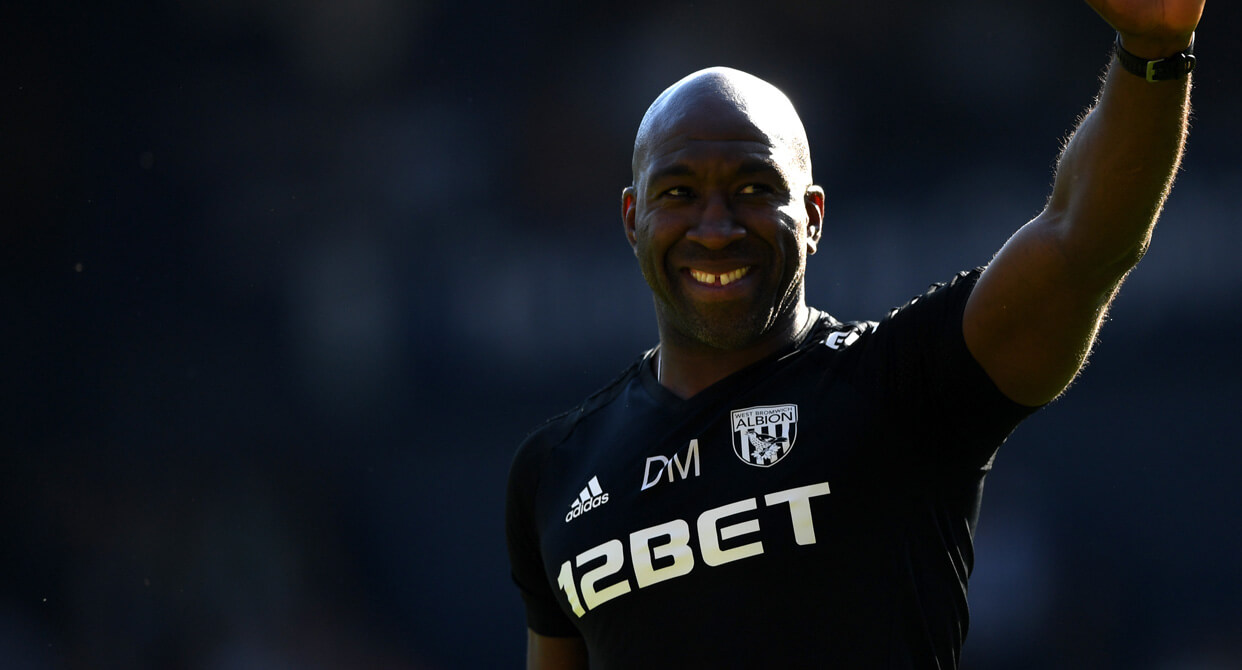 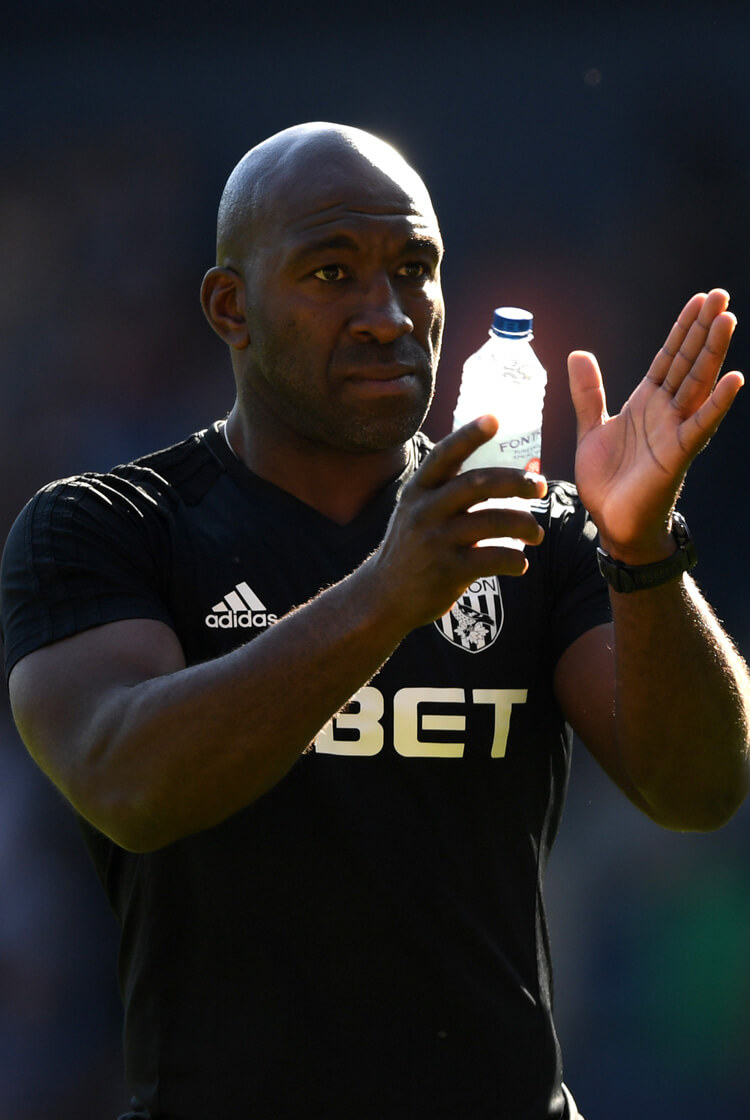 Darren Moore’s impressive spell as West Brom caretaker manager hit a new height with this dramatic late victory over a below-par Tottenham at The Hawthorns. Jake Livermore’s stoppage-time winner was enough to earn the Baggies all three points from a contest dominated – at least in terms of possession – by Mauricio Pochettino’s visitors, and keep alive the hosts’ slim hopes of a great escape. Subsequent results meant that Albion’s encouraging recent run would prove too little, too late in the fight for Premier League safety, but both performance and result added to the argument in favour of giving Moore the reins ahead of what is now a Championship campaign for next season. 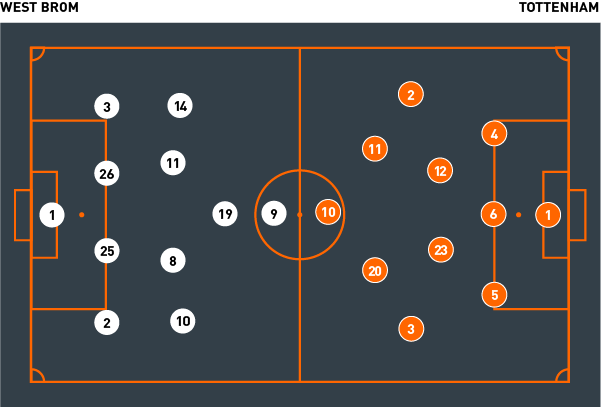 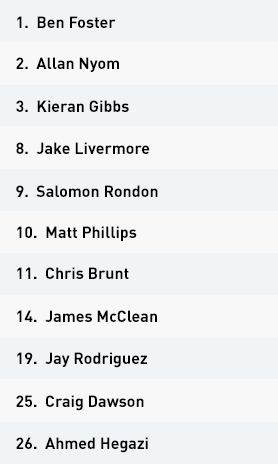 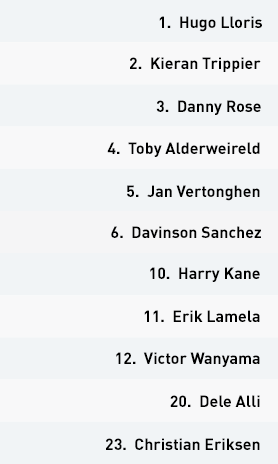 The Baggies made their intentions very clear from the start. They would concede possession and deny Tottenham the space to attack in dangerous areas. They kept the distances between their lines extremely compact, and forced Spurs to seek creative solutions or resort to hopeful clips into the box. They cleared the latter with little trouble, Ahmed Hegazi in particular a warrior at the back throughout.

The hosts would rarely press in central areas, instead looking to force Spurs into wide areas, where they would double up on the attacking wing-backs. Matt Phillips and Allan Nyom did this with superb consistency against Danny Rose on the Tottenham left, repeatedly preventing any crosses of genuine quality coming into the box.

In transition, West Brom looked a little vulnerable as they had less control over the larger spaces – but they generally recovered well as a team and managed to escape any real threat. They might have been exploited by a team moving the ball with greater speed and with more willing runners than Tottenham on the day, however.

In possession, the hosts had limited options and didn’t see much of the ball. The key strategy was to clear the ball with height and distance to Salomon Rondon, who would either run into the channel or look to hold the ball up. They also looked to play to their wide men, Phillips and James McClean, in the space vacated by Rose and Kieran Trippier, but their crosses were often blocked.

Rondon was particularly adept at winning fouls for his team through his hold-up play, providing West Brom with further opportunities to get the ball into the box – a key area of strength. The eventual switch of Rondon for Daniel Sturridge appeared a strange one, then, but it did allow them to try to build attacks rather than just send the ball forward – and the introduction of Nacer Chadli also made the home side more threatening on the counter-attack.

That said, the goal came from a set-piece. Phillips took the inswinging corner, which Dawson attacked at the back post before Livermore managed to scramble it over the line and earn his rookie manager an impressive scalp.

Tottenham set up in a 3-2-4-1, with Christian Eriksen in an unfamiliar deeper-lying role alongside Victor Wanyama in midfield. The formation could also be seen as a 3-4-2-1, depending on the height of wing-backs Kieran Trippier and Danny Rose.

This was a lacklustre performance from Spurs, however. They dominated possession but created very little with it. The deployment of three central defenders was somewhat intriguing, as West Brom had no intention of pressing their build. With three centre-backs, the defensively minded Wanyama and Eriksen playing deep, they had limited options between the West Brom lines and, with infrequent movement between the midfielders, caused minimal complications for the home side.

Instead, Mauricio Pochettino’s men had to resort to crosses from deep and shots from distance in the first half. In the early stages, Harry Kane would drop deep with Eriksen and then look to make late runs towards the box. This caused some initial confusion, but the hosts remained disciplined and weren’t pulled out of position.

The second-half introductions of Son Heung-min and Lucas Moura did very little to alter the approach or offer new solutions. It was only when Fernando Llorente came on for Jan Vertonghen that Spurs managed to threaten West Brom’s box with an aerial presence – but the change came far too late and could arguably have been in place before the game had started. With one less central defender and two centre forwards, Spurs were able to occupy more West Brom defenders when building an attack and had a realistic target for the crosses from deep positions – which were still their only real means of attack.

Out of possession, Spurs struggled to contain Salomon Rondon and resorted to fouling him on several occasions. As West Brom tended to clear their lines rather than secure possession, there wasn’t a need for any great pressing structure – the ball would invariably end up with Spurs’ back line after each clearance anyway.

They were able to create more threatening attacks when they enticed West Brom out to press. The increased spaces they had to work with were suited to their creative midfielders, but the ball speed was too slow too often and the hosts found it too easy to recover back into their compact shape.

This was also the case in transition, as the Spurs players took too many touches and slowed the game down. This allowed West Brom to regain their structure and leave the disappointing visitors searching in vain for a way through.

Spurs lacked potency in attack. They moved the ball too slowly and didn’t provide enough movement to entice West Brom players out of their structure when out of possession.

The visitors’ decision to play with three at the back was a strange one, particularly with the defensively minded Victor Wanyama – who could have provided added security for a back two should Danny Rose and Kieran Trippier wished to attack from full-back – ahead of them in midfield. Fernando Llorente gave Spurs another attacking dimension, but his introduction came too late.

West Brom’s compact block was exceptionally well organised and extremely difficult to break down. The only spaces they allowed Tottenham to play in would result in crosses into the box – exactly what centre-backs Craig Dawson and Ahmed Hegazi like to defend.

Salomon Rondon’s ability to draw fouls was a key part of West Brom’s approach in attack. Free-kicks could lead to balls into the box and corners – which, eventually, is where Jake Livermore’s winning goal came from.