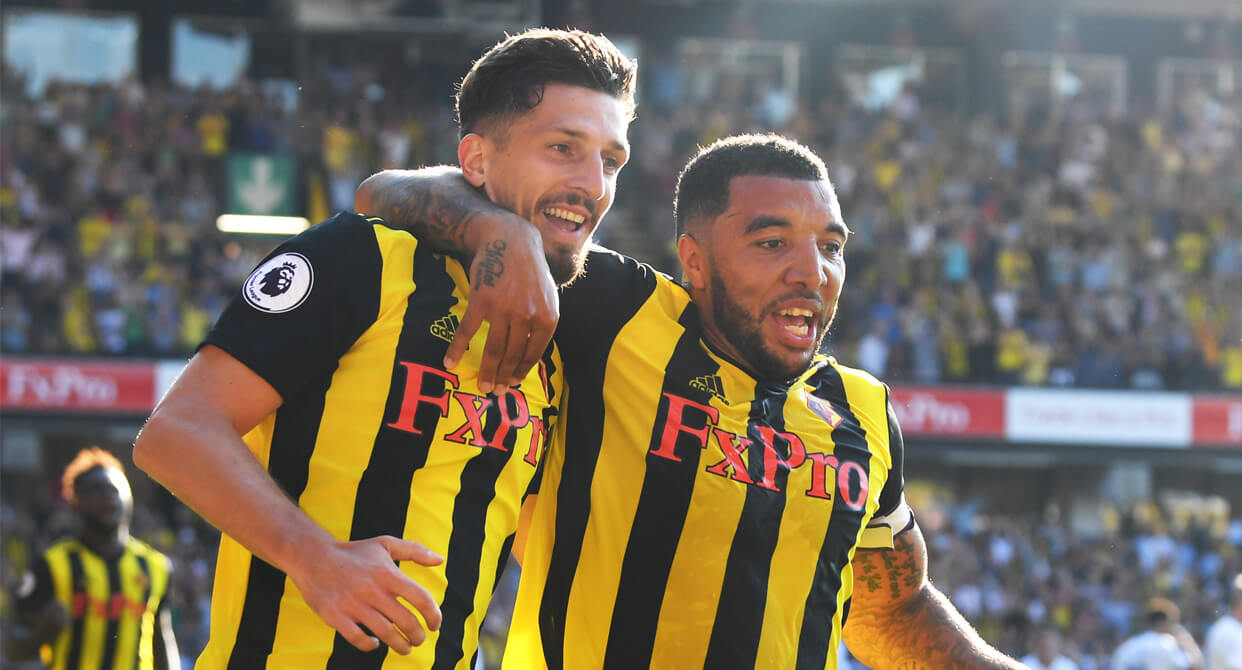 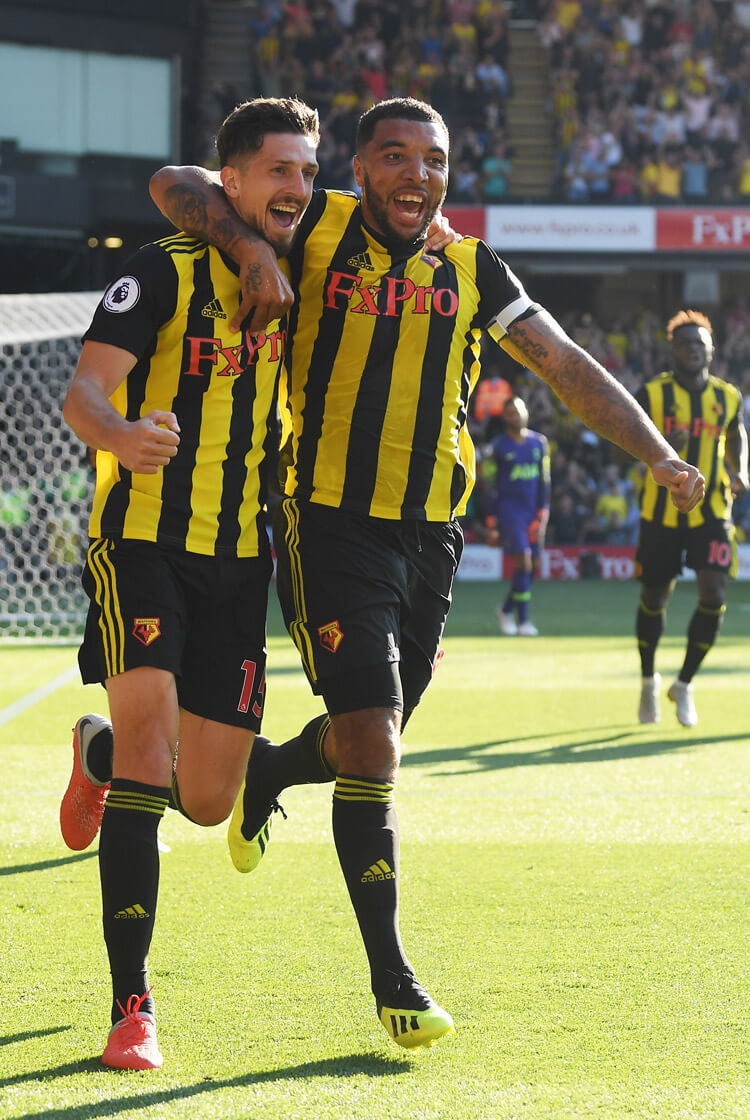 Watford are proving impossible to stop in the early stages of the Premier League season, as victory over Tottenham makes it four wins from four for head coach Javi Gracia and his players. Spurs made their way to Vicarage Road fresh from their 3-0 drubbing of Manchester United, but looked a shadow of the team that had silenced Old Trafford during a second-half performance to forget. It took a fortunate deflection from Abdoulaye Doucoure to gift Spurs the lead soon after half-time, and the hosts responded by moving up a gear. Captain Troy Deeney led by example in scoring the equaliser from a Jose Holebas free-kick, before centre-back Craig Cathcart headed the winning goal with 15 minutes remaining. This was Watford’s first Premier League victory over Tottenham at the 11th attempt, and helped them join Liverpool and Chelsea as the only sides on maximum points from their opening four fixtures. 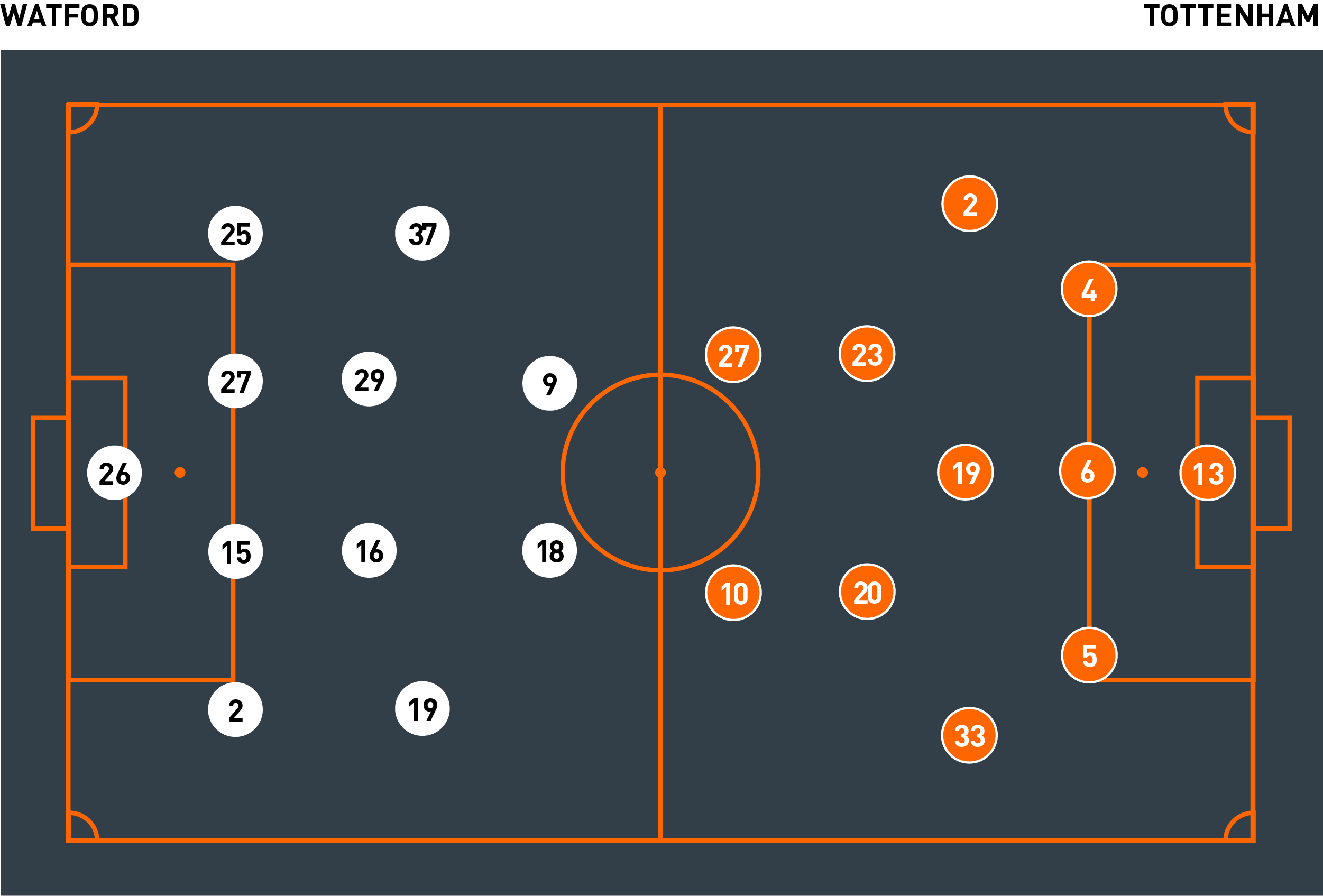 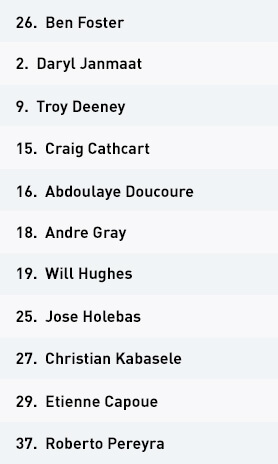 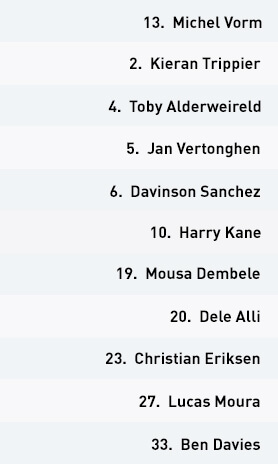 Watford were looking to make it four consecutive Premier League victories, as head coach Javi Gracia named an unchanged starting line-up from the victory over Crystal Palace. The home side continued to play in their 4-2-2-2 structure, which converted into a 4-4-2 shape when defending.

Attacking midfielders Will Hughes and Roberto Pereyra began in a narrow position when defending, creating a pressing trap around the Tottenham wing-backs. Should their opponents have passed into either wing-back, the ballside midfielder would aggressively cut off access to central midfield. This forced the Spurs defenders into longer passes over the Watford back line, which the hosts mostly dealt with comfortably.

When Tottenham switched the play across their defence at speed, however, neither Hughes nor Pereyra could move across quick enough. They prioritised blocking off central access into the visitors’ central midfield, which naturally started to open up spaces for both wing-backs to drive forward. The ballside full-back now had to step up and deal with the advancing wing-backs.

Watford’s back line were often caught three against three, with Dele Alli’s late forward runs occupying the far-side full-back. Despite this being a clear problem for Watford, Spurs still focused on delivering long balls over the defence rather than driving forward with the ball and moving into better crossing positions. A lack of attacking quality combined with poor decision-making ensured goalkeeper Ben Foster had few saves to make in the opening 45 minutes.

Troy Deeney would often drift away from the ball and into the left inside channel when attacking, where he could link with Jose Holebas and Pereyra, who provided the width during counter-attacks. Hughes would then look to fill central positions in and around the penalty area, creating good central attacking numbers. Delayed deliveries, particularly from Daryl Janmaat on the right-hand side, afforded the aerially powerful Deeney the time to rejoin play in the box before attacking crosses against static defenders.

This pattern of play proved the most effective for Watford, as Deeney looked to attack balls around the much smaller and aerially weaker wing-backs. The hosts’ back line could fire balls into their captain from deep, completely bypassing the Tottenham midfield. The striker regularly attached himself on to Kieran Trippier, against whom he won the majority of his aerial duels, with Pereyra close by to pounce on the second ball. Hughes would continue to come across to support Watford’s play on the left, although this did leave them vulnerable to the counter-attack on the opposite flank if possession was lost.

Despite a promising first half, Watford went behind early in the second period. A routine long ball – which they had dealt with so comfortably in the first half – eventually fell to Lucas Moura, whose cross was diverted into the goal off the chest of Abdoulaye Doucoure.

The Hornets were struggling to deal with Tottenham’s central access, as Hughes and Pereyra were getting drawn to the visitors’ advancing centre-backs within the inside channels. This opened up access to their central midfielders via the wing-backs, as Doucoure and Etienne Capoue lost track of Dele Alli and Christian Eriksen’s roaming movements. Their best chance of a revival was for Deeney and Andre Gray to hold up long balls and clearances, and draw fouls deep in the Spurs half.

Watford did look dangerous on the transition when Deeney remained central to attack long balls forward, however. The 30-year-old started to focus his movement away from the left side and into the central lane, where he could occupy up to two of Tottenham’s three central defenders and thus create additional space in and around the penalty area for runners to attack. They nearly profited after Deeney bullied Davinson Sanchez before providing a powerful cross that Toby Alderweireld almost headed into his own net.

Minutes later, Watford were level. Deeney rose highest to power home a header from Holebas’ inswinging free-kick after Hughes had drawn a foul in a dangerous position. Having equalised, they now started to flood players forward during counter-attacks. Both full-backs, Janmaat and Holebas, had started to penetrate forward off the ball, forcing more Tottenham players to make recovering runs. In turn, this reduced the effectiveness of Spurs’ own counter-attacks.

The comeback was complete with another headed goal from a set-piece. This time it was central defender Craig Cathcart who rose highest, Tottenham again failing to defend a Holebas delivery. Watford held on for a fourth consecutive victory, and their first over Tottenham in the Premier League.

Mauricio Pochettino made three changes from the away victory over Manchester United in their previous fixture. Goalkeeper Hugo Lloris missed out through injury, with Michel Vorm taking his place in the Tottenham goal. Pochettino also converted his defensive unit into a central back three, with Danny Rose and Eric Dier replaced by Ben Davies and Davinson Sanchez.

Tottenham set up with Mousa Dembele as the sole pivot in front of the back three. When Watford strikers Troy Deeney and Andre Gray would block off access into him, Christian Eriksen and Dele Alli would alternatively drop to assist the short build alongside the Belgian. This outfield overload of five against two ensured the away side could build short from goalkeeper Vorm up to the halfway line before having to contend with their opponents’ defensive mid-block.

To combat this block, Spurs tried penetrating with aerial passes over the defence. Forwards Harry Kane and Lucas Moura would make diagonal runs across the back line, looking to draw out a central defender into the wide areas. This was an effective strategy in winning corners and creating half-chances with occasional attacking crosses, but they created little to genuinely trouble goalkeeper Ben Foster.

When Eriksen dropped alongside Dembele, Alli could offer a third penetrative run in behind the defence – a run that often went untracked by the hosts’ two central defensive midfielders. Kane and Moura occupied both central defenders, allowing Alli a much clearer central space in behind. The latter nearly profited when meeting a superb ball from Toby Alderweireld, but his well-timed header dropped just over the Watford goal.

The option to drive out from the back was readily available for both central defenders and wing-backs, but instead they chose more direct passes forward. A dreadful goal-kick from Vorm – which was sent straight out for a corner – was symptomatic of Tottenham’s lack of quality in possession. One slick central move involving Dembele, Eriksen and Alli did carve Watford open in the first half, and demonstrated that their fast and short passing combinations could lead to attacking success – but they oddly refrained from such play for long periods.

Even when Tottenham did manage to break Watford’s midfield line – largely thanks to Moura’s constant movements to create a forward passing angle – a cutting edge when penetrating into the final third was still lacking. Watford’s defensive aggression in blocking crosses and conceding corners and free-kicks played to their advantage, as the home side had clear superiority in the air.

Alderweireld and Jan Vertonghen moved higher with the ball in the early parts of the second half, as they dominated the majority of the early possession. This forced Watford into a deeper block than previous, and also hindered their ability to transition out into attack. With Will Hughes and Roberto Pereyra having to now deal with the advancing defenders, more central space was created for Alli and Eriksen, who started to link well with Kane and Moura for the first time in the match. They had the option of building around the sides of the narrow Watford midfield and then back into the centre, with Alli and Eriksen occupying intelligent spaces to receive.

Spurs went ahead after utilising a long ball over the Watford defence, as seen throughout the first half. Eriksen pounced on the loose second ball after the hosts had failed to clear their lines. The ball was eventually worked to Moura, whose deflected cross was bundled into the net by Abdoulaye Doucoure. This goal, however, was more about the mistakes made by the Watford back line than the quality of Tottenham’s forward play.

As the home side looked to direct play to force their way back into the game, Spurs conceded from a deep free-kick. They were struggling to deal with the power of Troy Deeney and his subsequent headed knockdowns for runners from midfield. With Watford throwing more bodies forward on the transition, the midfielders were forced to increase their recovery runs into much deeper positions. They lacked the physical capacity to transition into attack themselves, with Kane and Moura increasingly isolated up top.

Less than 10 minutes later, the visitors fell behind – they couldn’t stop Craig Cathcart’s bullet header, having again failed to deal with a set-piece delivery. Despite throwing an additional striker into the mix in the form of Fernando Llorente, Spurs failed to recover and lost their 100 per cent start to the Premier League season.