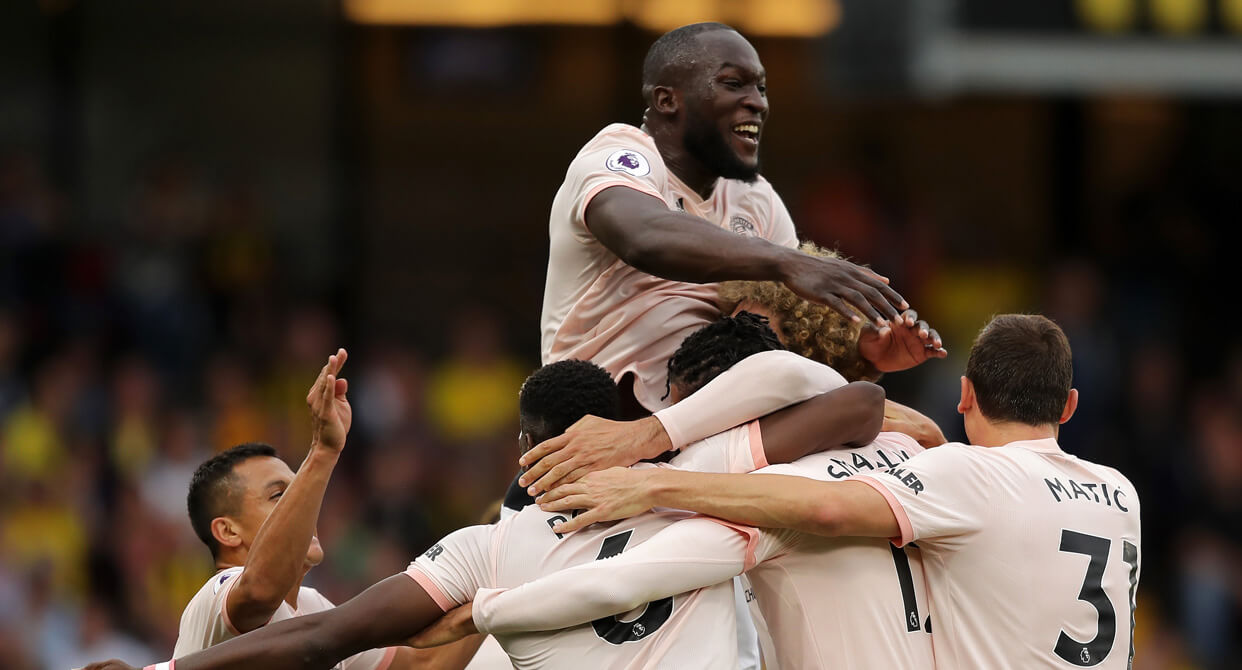 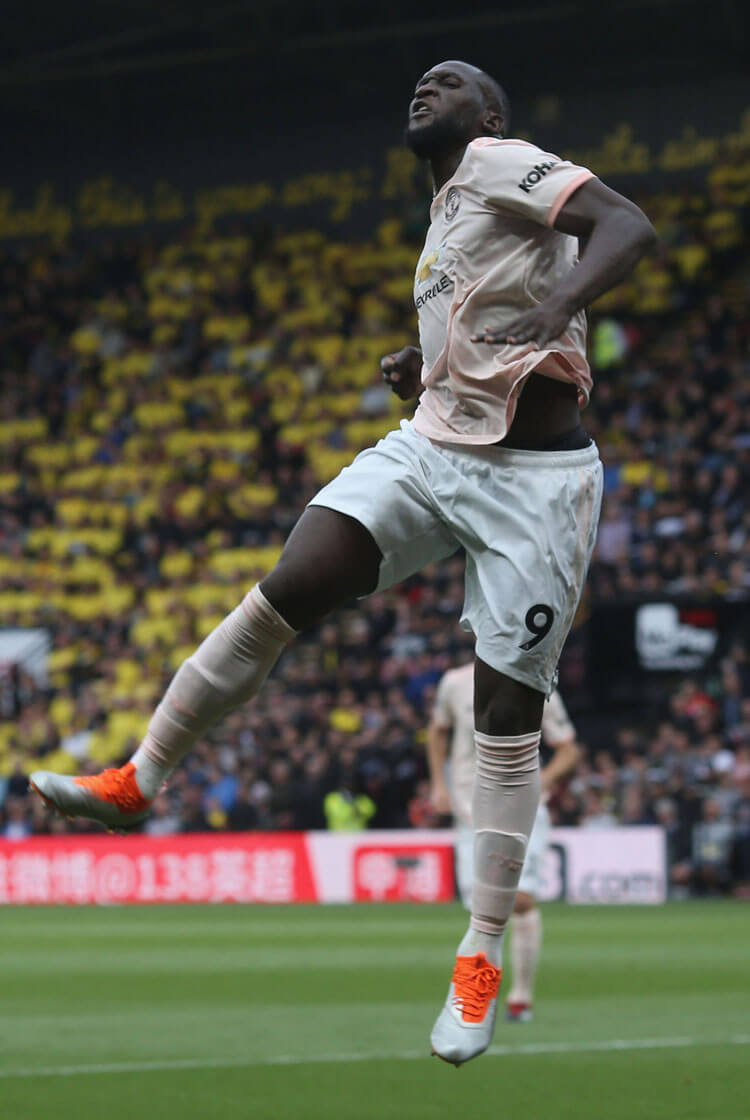 Manchester United inflicted a first defeat of the Premier League season on Watford, and made it back-to-back wins with this victory at Vicarage Road. United initially found it difficult to break their opponents down, and creativity again proved problematic for Jose Mourinho and his players, as both goals came from first-half set-pieces. Romelu Lukaku scored the first, diverting Ashley Young’s cross into the back of the net with his chest from close range, before Chris Smalling doubled the lead with a fine volley moments later. Watford responded well after the break and pulled one back through Andre Gray in the 65th minute, but they couldn’t find an equaliser. Nemanja Matic was dismissed deep into injury time, for a second yellow card, but the hosts had little time to take advantage of the extra man. 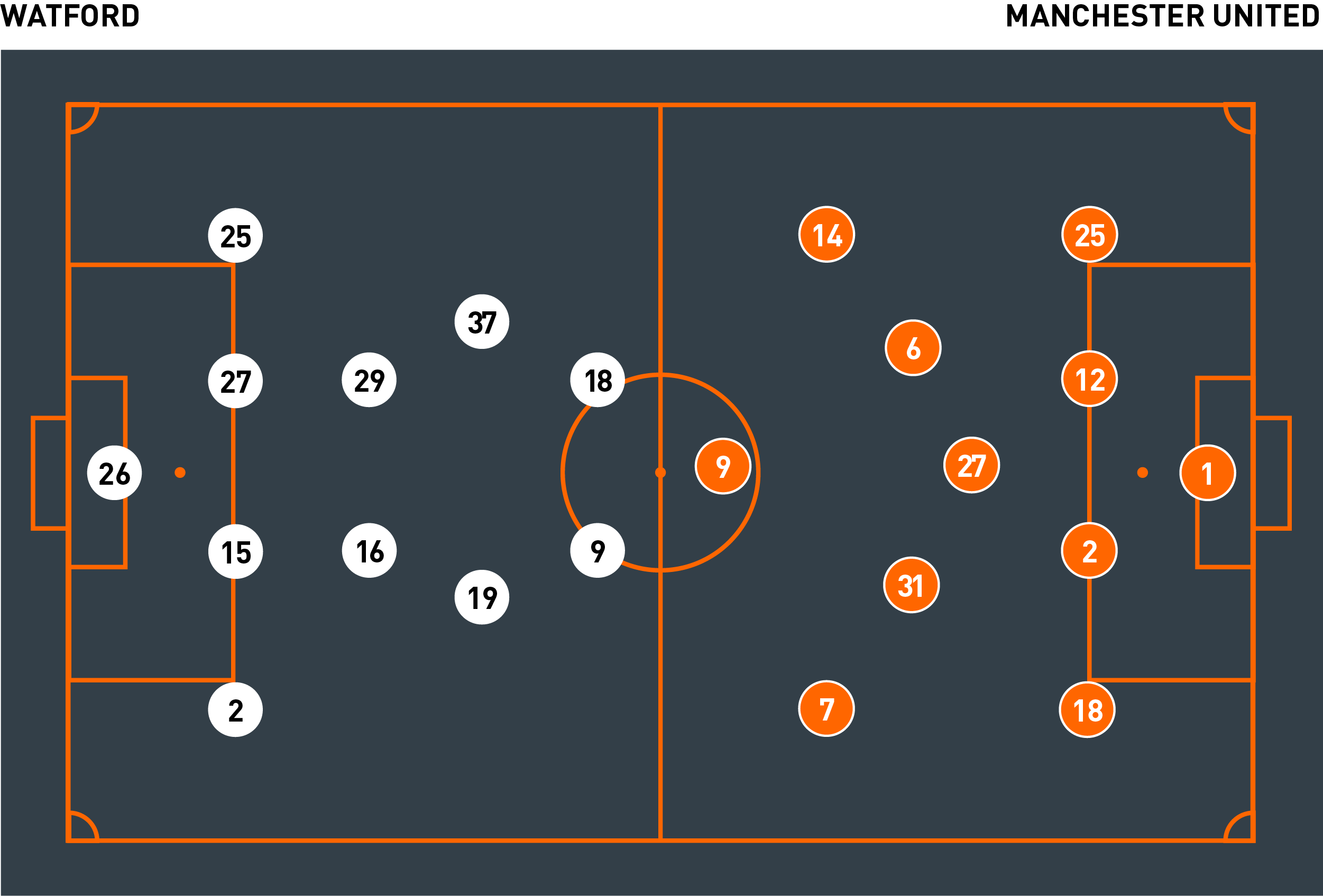 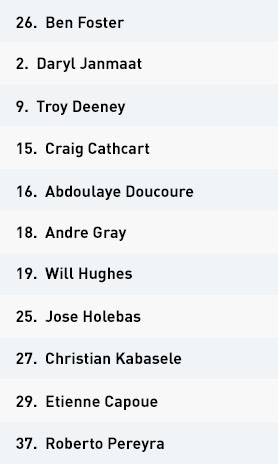 Watford named an unchanged starting line-up from their victory over Tottenham. Javi Gracia – who was named Manager of the Month for his side’s impressive run of results through August – chose to remain loyal to his 4-2-2-2 structure.

The hosts began by looking to build long into target man Troy Deeney from deeper positions, with wide midfielders Will Hughes and Roberto Pereyra both moving to the ball-side to offer support in winning any loose balls. With their early attacks focused on their left side, they then tried to switch play out to the right, where right-back Daryl Janmaat often had Ashley Young isolated one on one. Any inaccurate switches across to Janmaat reduced the threat, however, and actually left the hosts vulnerable to the counter-attack, with heavy numbers now on the far side.

Watford sought to sustain longer spells of possession in attack as the first half progressed, with Hughes and Pereyra forming a central attacking box alongside Deeney and Andre Gray. This ensured that Young was occupied at left-back and further freed Janmaat, who continued to move forward into open spaces wide right. Etienne Capoue dropped deeper into the back line, ensuring play could now be more accurately switched to Janmaat. As Manchester United had dropped to a 4-5-1, Capoue was rarely pressed and therefore had the time to pick his pass out. Janmaat could then send crosses into Deeney and any central supporting runners – although these were dealt with well by the United defence.

For all their defensive solidity, the Hornets were undone by two set-pieces in three first-half minutes. Romelu Lukaku scored first for the visitors, as the hosts failed to clear their lines from Young’s deep free-kicks. The ball eventually found its way back to the England international, who delivered a superb cross for Lukaku to finish from close range. Soon after, Watford failed to deal with the first phase of a corner, as Marouane Fellaini headed the ball back into danger for Chris Smalling to double United’s advantage. The hosts saw little of the ball for the rest of the first half, with goalkeeper Ben Foster ensuring they didn’t concede a third.

Hughes’ role in midfield changed at the start of the second half, with the 23-year-old refraining from coming inside, instead providing the attacking width on the right side. Andre Gray would hold his position between Victor Lindelof and Young, delaying the pressure on Hughes as he received deep switches, giving him time to then combine with Janmaat and work the ball into the final third. United stood firm, however, and their threat on the break grew.

Out of possession, Watford’s transition into defence was initially caught out by Paul Pogba’s early forward passing, but the recovery runs from central midfield in particular were outstanding in delaying any attacks. With United’s front line remaining high as Watford attacked, Pogba had immediate access into his forwards – but Capoue and Abdoulaye Doucoure tirelessly recovered the ground, delaying most of their opponents’ attacking transitions.

The home side eventually grabbed a goal, and Hughes’ positioning was again key. Just as United were adapting to their right-sided combinations, the midfielder moved back inside to create an overload of five players. Jose Holebas had moved forward from left-back, while Gray had also moved across but held back from United’s final defensive line. Doucoure provided a fifth attacking option, as he ran ahead of the ball from central midfield and into the final third for the first time. It was his cutback that found Gray, whose subtle movement away from the central defence had gone unnoticed.

Doucoure continued to make surging runs forwards to add numbers in the final third, as the hosts hoped crosses from their advancing full-backs would lead to an equaliser. Their front line couldn’t connect with the final ball, however, as United’s structure became increasingly condensed in the closing stages. Nemanja Matic’s late dismissal reduced the away team to 10 men, but Watford had little time to take advantage and dropped points for the first time this season.

Jose Mourinho made only one change from his side’s victory over Burnley, with the injured Luke Shaw replaced by Ashley Young at left-back. Marcus Rashford was also absent, serving the first of his three-game domestic ban after the red card he received before the international break.

Nemanja Matic and Marouane Fellaini formed a double pivot in midfield, with the latter often dropping into the defensive unit during United’s build-up, creating a central back three. Matic and Paul Pogba were positioned behind Watford’s two strikers, who initially did well to block off central access. If United did split the pair, Pogba’s craft in possession ensured the ball was progressed further, despite it being aggressively pressed in the central lane. The Frenchman’s quality ensured the visitors could avoid the heavy central presence and utilise the advanced positioning of full-backs Antonio Valencia and Young.

United tested the away side’s back line with crosses into the box and shots from outside the areas, but they were frustrated by a congested 4-4-2 block. Jesse Lingard began on the right side of the front three, but the fluidity of his movement saw him receive on the left side and drop short towards the defensive unit to dictate play. His movement actually served to stop any of the newly formed back three driving forward with the ball and tempting individuals out of Watford’s congested midfield, however.

When Lingard remained higher, Matic would be tempted into dropping short, often bringing an additional opponent towards the back line. Again, this congested the central space that was initially available for a defensive ball-carrier to drive forward into midfield. The back line thus frequently resorted to long balls forward, which Romelu Lukaku chased via diagonal runs across the back line. The Belgian often headed towards the corner flag rather than the goal – but, to his credit, he won a large proportion of these deliveries. Alexis Sanchez would drift inside from the left to attack lay-offs from his teammate, but his attacking presence was once again barely noticeable.

Given United’s enduring lack of creativity, set-pieces posed Watford the most danger – and it was from a free-kick and then a corner that the visitors inflicted the damage in the first half. After Lukaku and Chris Smalling had earned them a two-goal lead, they maintained possession to run down the clock until half-time. Watford started to show their frustration and gaps started to open, particularly on the right. Lingard continued to drop short, but rather than one of Roberto Pereyra and Troy Deeney applying pressure, both closed him down – which in turn created huge spaces into which Valencia could drive forward from right-back. Pogba almost made it three after latching on to a clipped ball from Lingard, who had received in the inside channel, but his volley was well saved by Ben Foster.

United were forced to deal with an improved Watford after the break, and they were limited to counter-attacks from deeper positions throughout the second half. Their front line became isolated from the rest of the team, as Lukaku and Sanchez struggled to connect against an overload of defenders. The timing and speed of Pogba’s early forward passing did threaten to catch Watford out in their defensive transition, but United never really converted this threat into genuine opportunities.

Even with the introduction of Anthony Martial for the final 20 minutes, their transitional game lacked a cutting edge. Matic then saw red deep into injury time – the second consecutive game from which a United player has been dismissed – but Watford had little time to make use of the extra man. A late save from David de Gea confirmed United’s first back-to-back victories of the Premier League season.