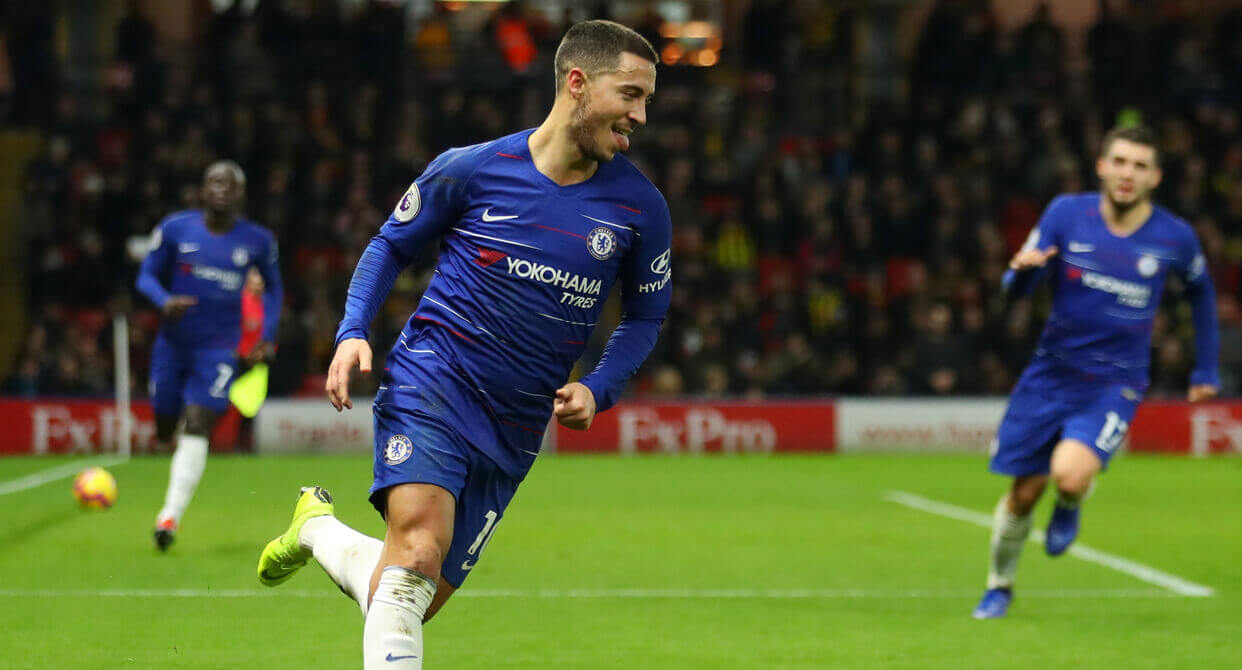 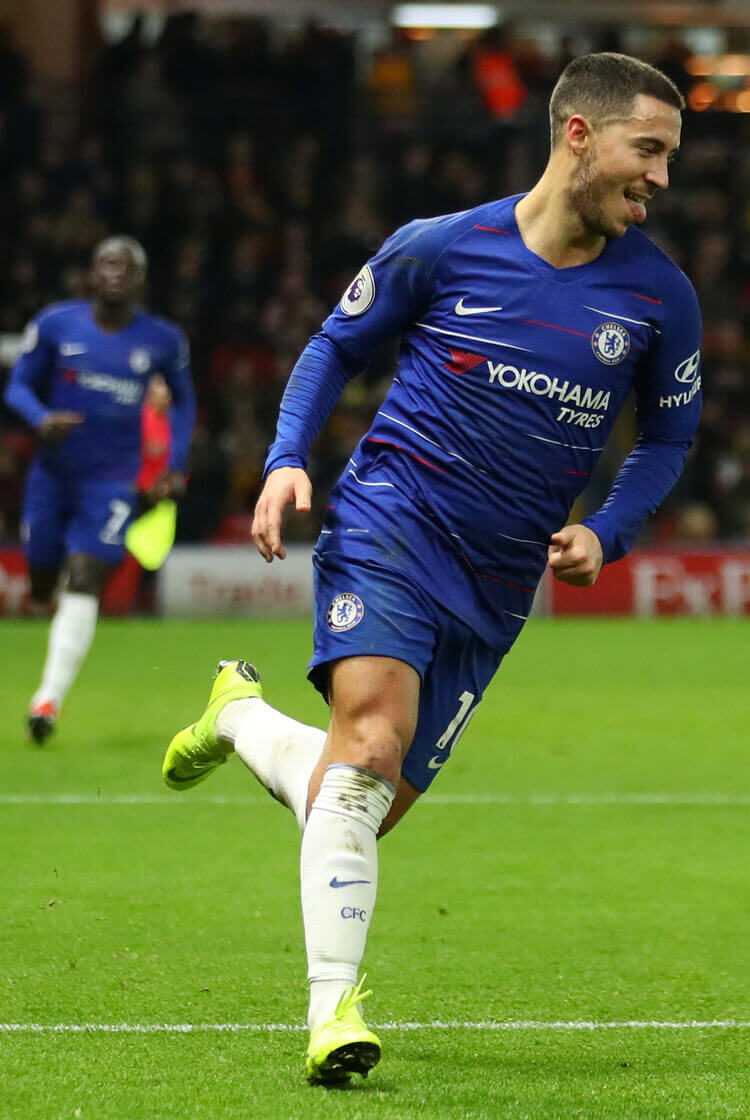 Chelsea retained their spot in the top four with a narrow but ultimately comfortable win against Watford in the late Boxing Day kick-off. The Blues dominated possession in the first half and looked to have secured themselves a half-time lead when Eden Hazard, once more playing in a false nine role, ran on to a Mateo Kovacic pass and finished confidently past Ben Foster. Ricardo Pereyra’s superb volley from a Jose Holebas corner but moments later saw the hosts in level, but Hazard won and converted his own penalty early in the second half to secure a lead Chelsea never looked like losing. Despite defeat, Watford ended the first half of the Premier League season in the top half. 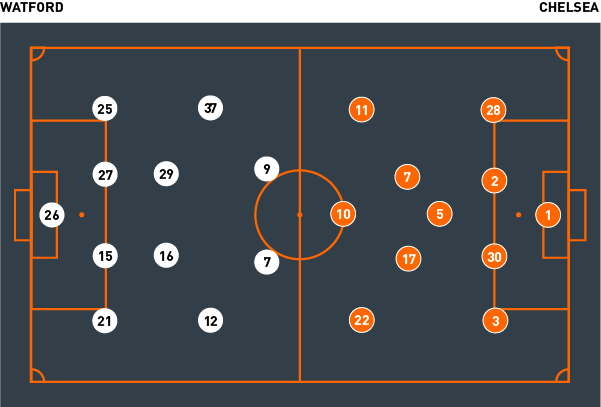 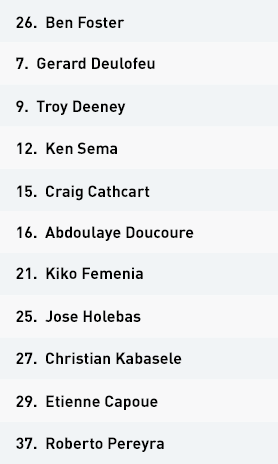 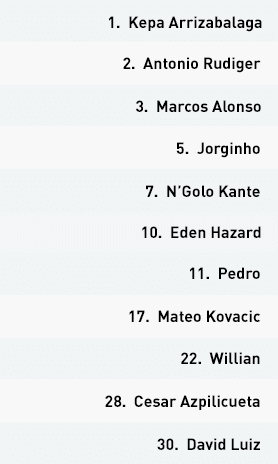 Javi Gracia set his Watford team up in a 4-4-2 formation that took on the form of a 4-2-4 in attack, with Roberto Pereyra and Ken Sema playing as wide attackers alongside central strikers Troy Deeney and Gerard Deulofeu. Etienne Capoue and Abdoulaye Doucoure tended to play deeper in central areas, which also allowed Kiko Femenia and Jose Holebas to advance forwards from full-back.

The hosts looked to send direct balls from deep to Deeney, who would contest the aerial ball and try to direct his header to a teammate. Another strategy was to try to exploit wide areas; this became more of a focus in the second half, when Watford had a slightly firmer hold on the game and the relationship between full-back, wide midfielder and near-side central midfielder was crucial in trying to combine around the Chelsea full-backs. A third strategy was to utilise the counter-attack; they would often try to combine this with a switch of play, often regaining the ball on the right and releasing the dangerous Pereyra on the left.

Out of possession, Watford utilised a 4-4-2 mid-block and would only really look to press in their own half. In the Chelsea half, the hosts would initiate a press only from a goal-kick or if they were close to a Chelsea player who played a short pass backwards or sideways. The issue with the press was that several Watford players joined in – but this left them exposed in other areas further from the ball, which could then be exploited should Chelsea break the press.

In the mid-block phases, Watford had a clear plan to try to discourage Chelsea playmaker Jorginho from getting on the ball. When the ball was central, Deeney and Deulofeu would stay within three or four yards of him either side; Doucoure and Capoue would also keep a close vertical distance, but they also had to be able to affect the other Chelsea midfielders, Mateo Kovacic and N’Golo Kante. When the ball went wide, the nearest centre forward would go out to engage along with the wide midfielder on that side, while the second striker would move in centrally to mark Jorginho.

Further back, one of the two Watford centre-backs – mostly Craig Cathcart – would try to drop with Eden Hazard when he dropped into attacking midfield areas. But this left the home side susceptible to runs from deep, and the fluid movement and rotation throughout the Chelsea side proved a constant threat. It was from one such Hazard movement that the Belgian won the penalty from which he won the game for the visitors.

Maurizio Sarri set Chelsea up in his preferred 4-3-3 formation, with Willian, Pedro and Eden Hazard operating as a front three ahead of central midfielders Jorginho, N’Golo Kante and Mateo Kovacic.

The Blues were playing against an organised mid-block, and would try to use three key methods to break Watford down. Firstly, they would play short, one-touch passes in deep positions to try to entice Watford towards them, and then play out to the other side to exploit the space. As Watford rarely pressed, this wasn’t a common strategy – but one they still tried to take full advantage of when the situation presented itself.

The more common method was through movement and rotation. Chelsea operated in two main groups in the wide areas and half-spaces: Kovacic, Willian and Marco Alonso on their left; Kante, Pedro and Cesar Azpilicueta on the right. These groups would rotate regularly, and give the Watford players in their block a problem in terms of tracking or holding their position – particularly when Hazard dropped deeper to add to the overload.

Another strategy was to create overloads, rotate and pin Watford players. For example, with Alonso and Kovacic outside and in between Ken Sema and Abdoulaye Doucoure – and Kante and Azpilicueta doing the same with Roberto Pereyra and Etienne Capoue on the other side – the Watford midfield found themselves fixed and unable to move for fear of being bypassed. Couple this with the rotation of Willian or Pedro, dropping from the top line in between Capoue and Doucoure to receive, and Chelsea were then able to penetrate.

In the second half, Hazard dropped more frequently. The Watford centre-backs would track him, which created space for runners from deep – mostly Kante and Kovacic – to run beyond the Watford defence. This strategy eventually led to Hazard himself making such a run, and winning the penalty from which he also scored the decisive goal.

Out of possession, Chelsea dropped into a 4-5-1 shape, but would release one of their midfielders to join Hazard in pressing higher up. If the ball was at the feet of Adrian Mariappa – an early replacement for the injured Christian Kabasele – and Hazard pressed, then Kovacic would release himself to press Craig Cathcart. If the ball was switched the other way, Kante would be the midfielder to advance. This strategy conserved Hazard’s energy, saving him from sprinting from centre-back to centre-back and then to Ben Foster in the Watford goal.

If Watford bypassed the Chelsea press, then the Blues would recover into a 4-5-1 with Willian and Pedro (latterly Callum Hudson-Odoi) tucking in with the midfield three. Chelsea were also excellent at winning the second balls, which was a prominent part of their strategy in dealing with the aerial threat of Troy Deeney. They would camp players around Antonio Rudiger and David Luiz, who would attack the ball aerially; the midfield would come closer than usual, meaning there was much less risk of Deeney knocking the ball down to one of his own midfielders. In this way, Chelsea saw out the game with relative ease, securing the win that kept them in the top four.