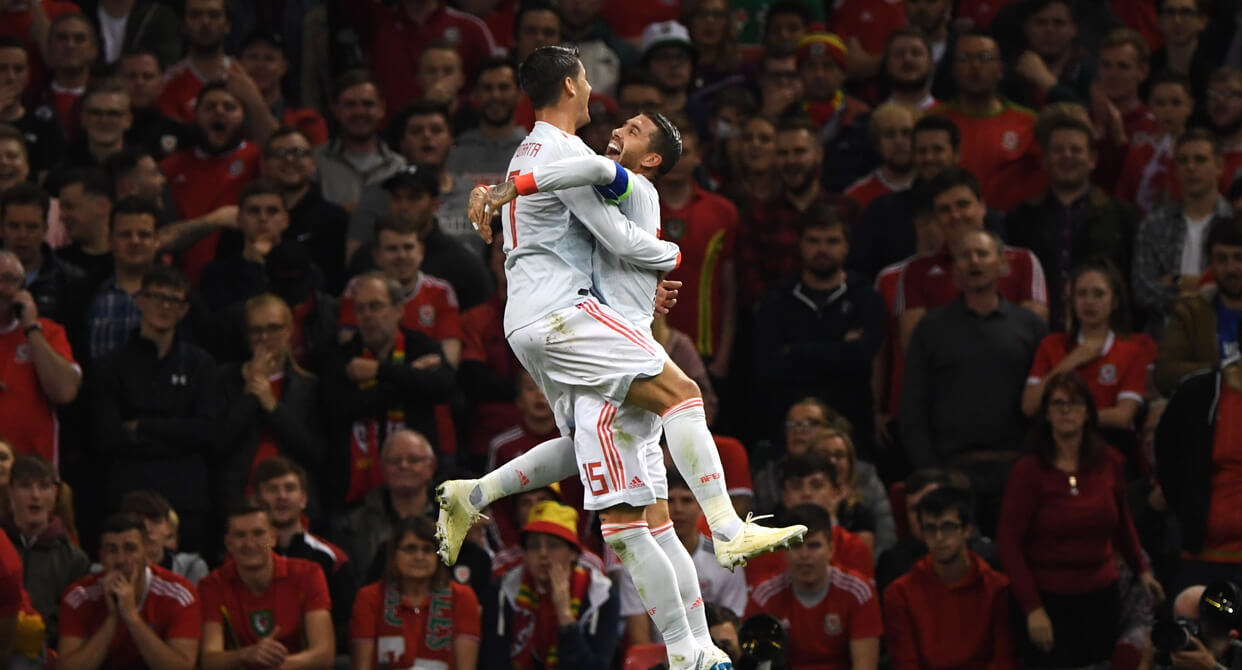 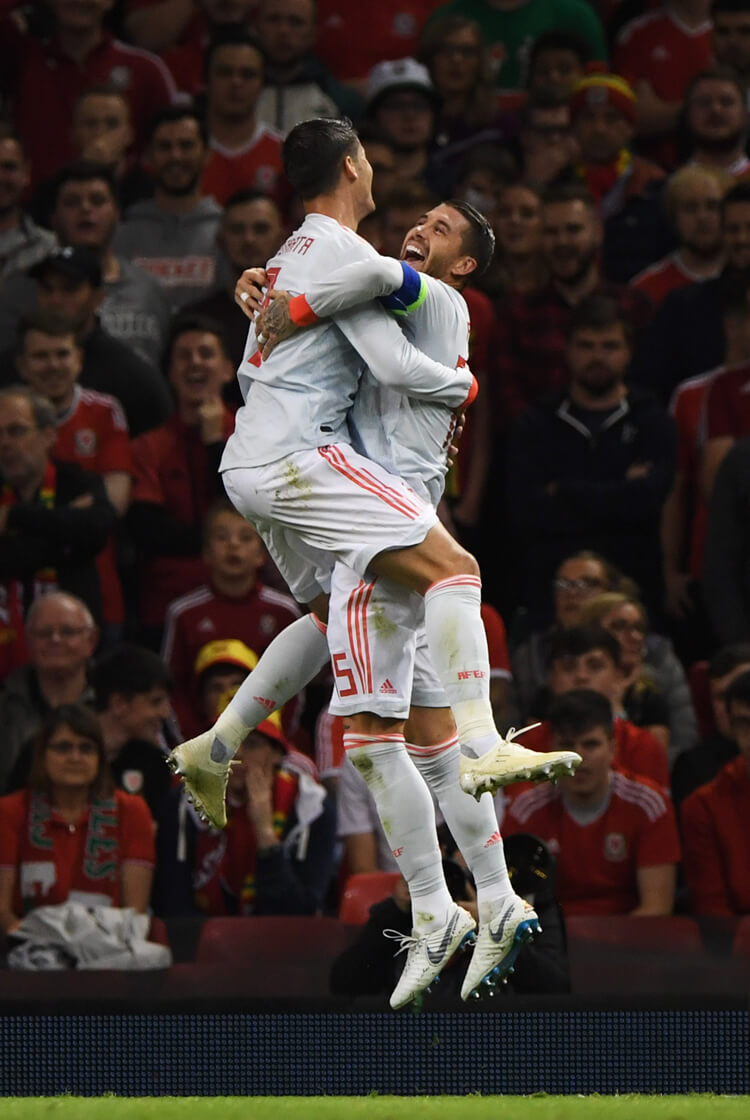 Wales’ highly anticipated return to the Principality Stadium after a seven-year absence was spoiled by a dominant performance from Spain in this international friendly. More than 50,000 supporters took to their seats to watch the action, but Luis Enrique’s players were in complete control from kick-off. Paco Alcacer scored twice in the first half, while Sergio Ramos also got on the scoresheet in the most comfortable of opening 45 minutes for the visitors. The tempo dropped after the break, with both teams making a number of changes, but Marc Bartra added a fourth for the visitors before Sam Vokes grabbed a late consolation for Ryan Giggs’ men. 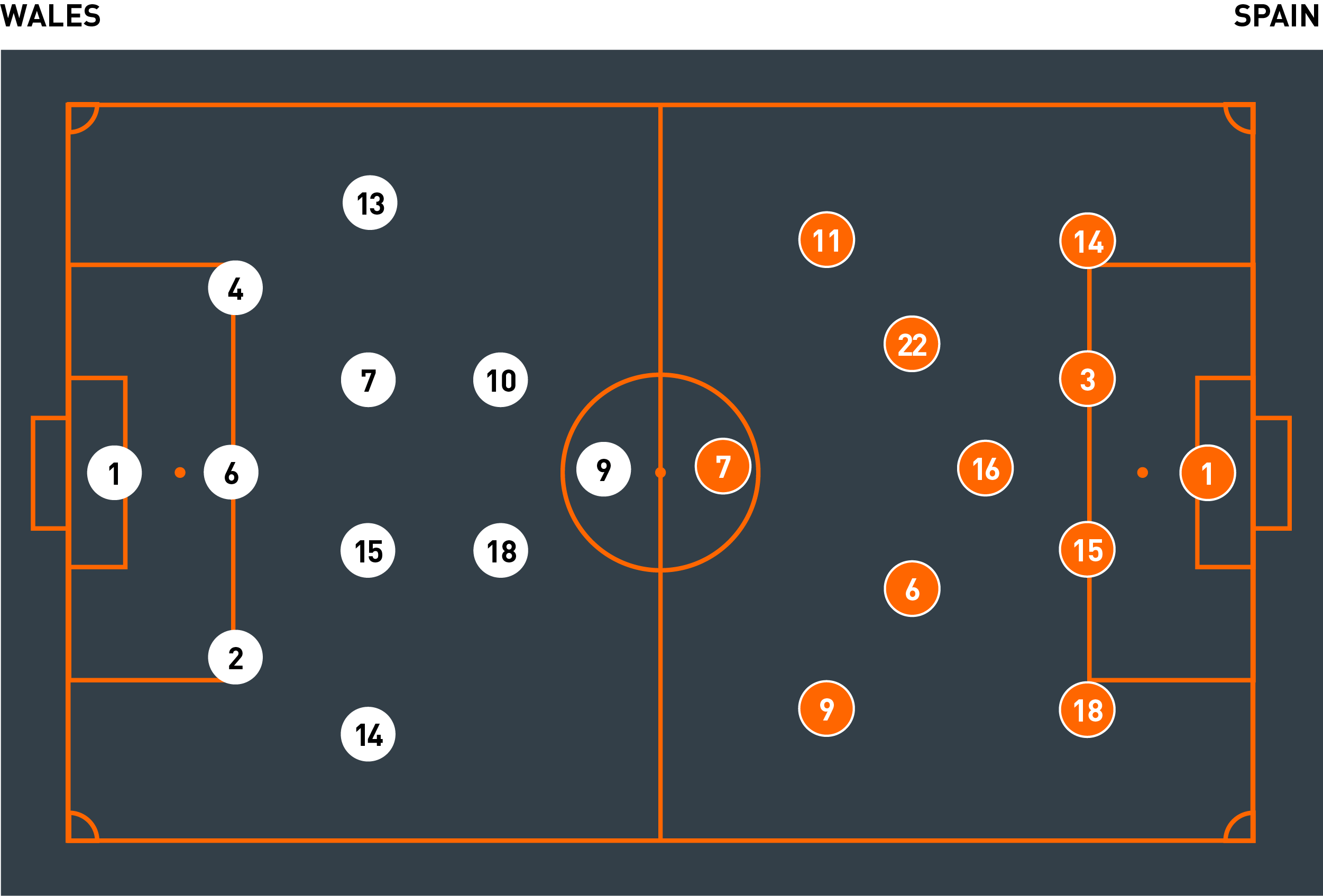 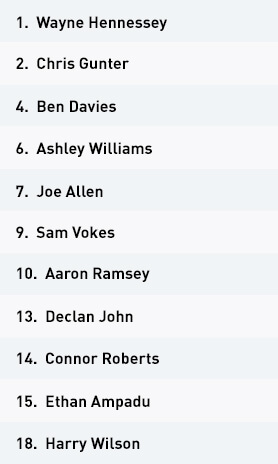 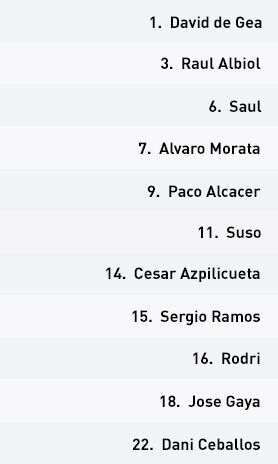 Head coach Ryan Giggs made four changes from the side that lost to Denmark in Wales’ recent UEFA Nations League fixture. Ashley Williams returned to central defence, as Wales set up with a back three rather than a back four. Declan John came in to fill the left wing-back role, while Harry Wilson and Sam Vokes replaced Gareth Bale and Tom Lawrence in a 3-4-2-1 structure.

The hosts’ early mid-block allowed Spain to dominate the ball from the off, with their opponents comfortable in building into midfield from their back line. As they progressed the ball higher and Wales dropped deeper into a low block, Giggs’ team converted into a 5-4-1 system, with Aaron Ramsey and Harry Wilson dropping back into wide midfield roles. These dropping movements were inconsistent and thus often created easier access for Spain into their wide attackers, however.

After falling behind to an early Paco Alcacer strike, Wales tried to build possession with short passes from goalkeeper Wayne Hennessey. Spain’s front line was extremely aggressive in their pressing, however, and successful in forcing the home side to play into midfield quicker than they would have liked, where a three-against-two overload killed any potential breakout from the central lane. Even if one of Ramsey or Wilson dropped into midfield to create numerical equality, they lacked rotations off the ball to overcome the intensity of the Spanish press. What’s more, as they attempted to expand in possession during their deep build, more gaps were created for Spain to exploit after winning the ball in midfield.

Disappointingly, the second Spanish goal came from basic mistakes in defence rather than positioning or pressing. Sergio Ramos headed home from a routine free-kick, as the back line set up with only four markers against five attackers – a strange decision given all 11 players were back inside the defensive third. In the rare moments Wales could muster some possession after conceding the second, they looked most effective when utilising chipped passes forward to lone forward Vokes. Intelligent hold-up play from the Burnley striker allowed Wales to bypass a pressing central midfield unit and make use of forward runs from Ramsey and Wilson.

Moments of play where Ramsey and Wilson dropped short towards the ball from higher starting positions also helped create some attacking progress. Spain narrowed against the briefest of central overloads, attempting to block off as much central access as possible – this enabled wing-back Declan John, whose attacking progress had been limited by the threat of Suso in behind, to move higher on the left. Despite this momentary overload, though, they lacked accurate balls forward over long distances to create any openings.

Alcacer volleyed in his second of the match to make it 3-0 shortly before the half-hour mark, and Giggs made a selection of changes after the break. Williams and Wilson were withdrawn, with James Chester and David Brooks their replacements. Ethan Ampadu, who grazed the outside of the post towards the end of the first half, was forced off through injury and replaced by Andy King. Wales then converted to a back four, with Ramsey remaining much higher than in the first half to complete a 4-4-2 structure.

Wales’ difficultly in containing the midfield possession of their opponents continued, as the overload ensured total Spanish dominance of the ball. When one of the hosts’ wide midfielders stepped inside to assist with marking or pressing, the visitors made use of willing runs in behind from the front line or targeted the full-backs – particularly Jose Gaya on their left, as it was often Brooks who stepped inside from right midfield.

A lack of home possession ensured the Principality Stadium remained quiet, and further misery was inflicted on the crowd when Marc Bartra added a fourth in the 74th minute. Vokes did grab a late consolation with minutes to spare, meeting Brooks’ cross to nod home – but they were simply well beaten by far superior opposition.

Spain set up in their familiar 4-3-3 shape, but made six changes from the side that had thrashed World Cup finalists Croatia in their previous match. Cesar Azpilicueta came in at right-back for Dani Carvajal, while Raul Albiol partnered Sergio Ramos in central defence. Rodri replaced Sergio Busquets in the single defensive midfield role, while the attacking trio of Isco, Marco Asensio and Rodrigo were replaced by Paco Alcacer, Alvaro Morata and Suso.

The visitors’ passing dominance was evident from the start, as they established spells of possession deep within their half, testing and adjusting to the defensive shape their opponents deployed. Rodri’s dropping movements in between Ramos and Albiol created space for the latter in particular to drive into midfield. Ramos was much more limited with this throughout the first half, as Sam Vokes looked to block off access into his feet.

Left-back Jose Gaya was much more progressive in his forward movements than Azpilicueta on the right, moving high and allowing Alcacer to move inside right centre-back Chris Gunter. Suso provided the width from the right, and looked to cut back on to his left and fire crosses into Morata and Alcacer. The former Liverpool attacker was afforded additional space by a Wales midfield unit unable to cover the entire width of the pitch – and it was his cross that eventually led to Spain’s first goal of the evening, from Alcacer.

Spain’s dominance continued as their high-pressing front line harried the Wales defence to play into midfield – even when the hosts weren’t set or ready for the ball. They could then comfortably regain possession and build more attacks using the overlapping runs from Gaya at left-back. Their lead was soon doubled when an unmarked Ramos headed home with ease from a routine free-kick. Gaya’s clever blocking of Declan John ensured his captain had extra space to time his header into the far corner.

Spain’s ability to place players between Wales’ midfield and defensive units ensured constant progress from back to front with the ball. When in possession, the front line and accompanying supporting midfielders were always available for splitting forward passes from the back line. Should the first splitting pass break down, the distances between the players was tight enough to help them counter-press and quickly regain possession. These distances were also far enough not to overcrowd the player receiving the initial pass, thus creating space and stretching the Wales unit horizontally for further passes forward.

The second half lacked the tempo of the first, as both teams made a number of substitutions. Ramos, Saul and David de Gea were withdrawn at the interval, but their 4-3-3 structure and control of the game remained. Wales’ shift to a 4-4-2 system meant the central midfield overload stayed in their favour, too.

The impressive Rodri continued to drop in to the centre of defence, as both Wales forwards pressed away from the central lane. The Atletico Madrid man often dragged out one of the central midfielders, helping to create a two-on-one with the remaining central midfielder. Should one of Wales’ wide midfielders step inside to help add extra defenders to the central lane, Spain then targeted the full-backs who had been left vacant by these inside movements. No matter what the approach tried by Wales when out of possession, Luis Enrique’s players had a solution.

They added a fourth towards the end of the second half, as substitute Marc Bartra’s superb header found the far corner, again from a routine set-piece delivery. They’ll be disappointed not to have held out for a clean sheet, with Vokes’ header finding the far corner in the 89th minute – but it took nothing away from a totally dominant display from Spain.