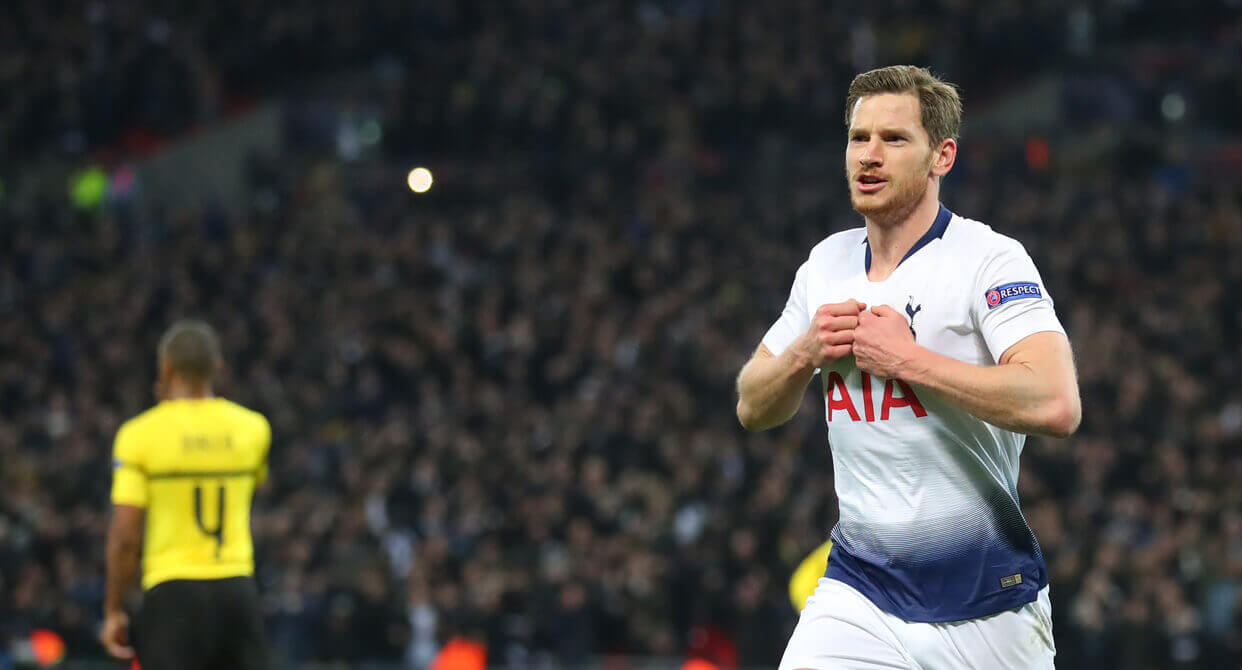 Tottenham took a huge step to reaching the quarter finals of the Champions League for only the second time, as a stunning second-half display against Borussia Dortmund earned them a 3-0 advantage from the first leg at Wembley. Goalkeeper Hugo Lloris was called into action a number of times in an even first half, most notably to deny the Chelsea-bound Christian Pulisic, but the German league leaders – featuring young English star Jadon Sancho – faded as an attacking force as Spurs took control after the break. Son Heung-min volleyed home a superb cross from the rampaging Jan Vertonghen, operating as a left wing-back, within two minutes of the restart. The Belgian defender crashed home a volley of his own seven minutes from time, before Christian Eriksen crossed for substitute Fernando Llorente to extend the advantage soon after. Job done for Mauricio Pochettino and Tottenham, who head to Dortmund in three weeks as big favourites to progress. 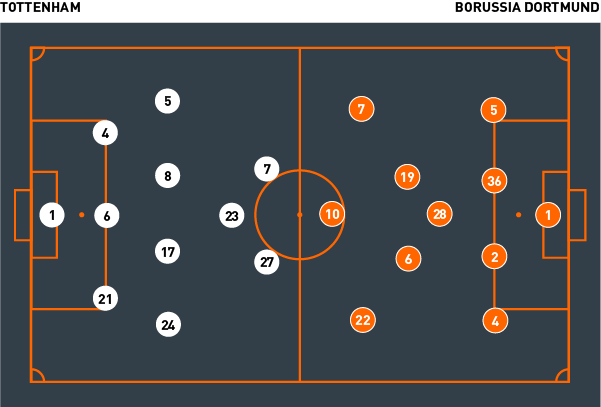 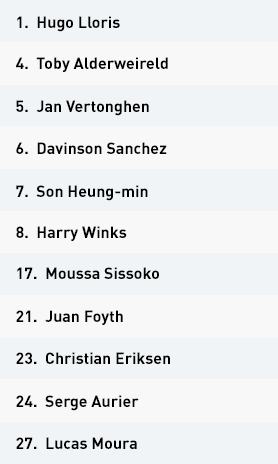 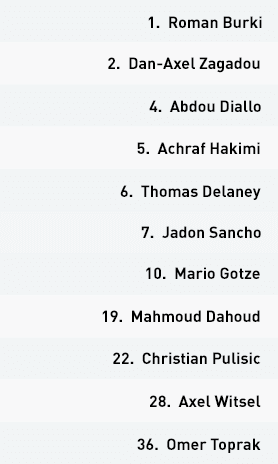 Mauricio Pochettino set Tottenham set up in a 3-4-1-2 formation, with Serge Aurier, Moussa Sissoko, Harry Winks and Jan Vertonghen across midfield. Christian Eriksen started just ahead of them, behind a front two of Lucas Moura and Son Heung-min.

The hosts demonstrated a clear strategy in possession, to try to exploit wide areas and get crosses into the box – all three of their goals on the night came through this approach. One of their common tactics within this strategy was to drop Eriksen into a deep-lying position to receive from the centre-backs, with the intention of narrowing the Dortmund structure. As someone moved to press him, he played long, diagonal passes for the forward runs of wing-backs Aurier and Vertonghen. If Eriksen wasn’t in a position to play these balls, then Winks, Toby Alderweireld or Juan Foyth were alternatives – particularly the latter two, who had more time as the visitors tended to hold their positions.

Eriksen also used his positioning and movement to try to create openings in the half-spaces and wide areas. That included dragging Axel Witsel towards Moura, who was being marked by Dan-Axel Zagadou – the two Spurs men interchanging their positions worked to cause momentary confusion between the two Dortmund players, creating time for Moura to get on the ball. The Danish playmaker also looked to position himself in front of Achraf Hakimi when Dortmund chose to press the Spurs back three with Christian Pulisic, Mario Gotze and Jadon Sancho; with the right-back now unable to move up to press Vertonghen, the wing-back was able to receive and progress in wide areas – from where he crossed for Son’s opener early in the second half. Finally, the hosts often dropped Moura or Son towards the ball – this offered a rotation with Sissoko or Eriksen, who could move in wide and behind to create further crossing opportunities.


Out of possession, Tottenham utilised two strategies: an aggressive, man-oriented high press that took on the form of their in-possession structure; and a deeper, organised 5-3-2 used more to protect their lead in the second half. The high press featured a very aggressive starting point from Dortmund’s goal-kicks, with Son, Moura and Eriksen all positioned on the edge of the penalty box, making short passes difficult for Dortmund to implement.

Once possession was with the Dortmund defensive line, Spurs pressed as follows: Moura on Omer Toprak, Son to Zagadou (although he would move inside to affect Burki, should the goalkeeper receive), Eriksen on Witsel, Sissoko on Thomas Delaney, Winks on Mahmoud Dahoud, Vertonghen on Hakimi and Aurier on Abdou Diallo. When the ball went to one side, the opposite wing-back would tuck in on the far side to ensure the Dortmund front three weren’t left man for man against Spurs’ back three; this left the opposite Dortmund full-back free, but only available through a long diagonal pass Spurs would be able to press.

If one of the wide attackers, Sancho or Pulisic, dropped towards the ball, then Alderweireld or Foyth would follow them and try to prevent them from turning. The high press yielded some success, with the opening goal coming as a result of aggressive pressure in Dortmund’s defensive third.

The other structure was simple to organise, with Eriksen leaving Witsel and dropping into a position alongside Winks and Sissoko. As a collective, Tottenham looked to flood numbers around the ball in their defensive third and make shooting angles and short combinations very difficult for Dortmund.

Head coach Lucien Favre set Borussia Dortmund up in a 4-3-3 formation in possession, with Axel Witsel, Thomas Delaney and Mahmoud Dahoud operating as a midfield three behind Jadon Sancho, Mario Gotze and Christian Pulisic in attack.

The visitors initially had trouble playing out against the Tottenham high press, with Witsel in particular struggling to get on the ball due to Eriksen’s close attention. They found a solution by dropping a second midfielder – Dahoud or Delaney – into the deeper defensive line, with Sissoko and Winks unwilling to follow them that far and leave a large space between the lines, where Gotze could drop. This allowed Dortmund to bring the ball out from the defence, although they didn’t need to do this as frequently in the second half due to Spurs sitting off and protecting their lead.

Dortmund tended to operate more down their right, and would generally look to create situations where Sancho could receive and play one-on-one against Alderweireld. With Sancho and Pulisic often threatening to move in behind (although Pulisic often came short and moved inside as well), Gotze was able to operate more like a false nine and look to receive between the lines. The Tottenham defenders weren’t willing to drop with him during the pressing phases because the wing-backs would be too high and the midfielders would be occupying players already; if Davinson Sanchez stepped out with him, there would be a large gap between Juan Foyth and Toby Alderweireld for Sancho and Pulisic to exploit.

In the second half, Dortmund had lots of possession in their defensive and midfield thirds, but struggled to create anything clear-cut against Spurs’ deep and compact structure. They left Wembley without a goal, leaving their task in the second leg even tougher.

Out of possession, the visitors operated in a 4-1-4-1 mid-block, with Gotze at the head, Pulisic and Sancho tucking in with Dahoud and Delaney in midfield, and Witsel playing between the midfield and defensive lines. They generally allowed Spurs to bring the ball out; Gotze applied mild pressure to Sanchez and Pulisic sporadically pressed Foyth, while Sancho tended to hold his position rather than press Alderweireld. When Pulisic did move up to press Foyth, left-back Abdou Diallo jumped up to cover Pulisic’s position and cover wing-back Serge Aurier.

Dortmund had a tendency to leave space in behind, with their midfielders sometimes dragged into taking on roles that didn’t belong to them. Witsel would then have to close down Sissoko or Winks, which would leave Eriksen, Son or Moura free between the lines. Centre-backs Zagadou and Toprak usually followed Moura and Son when they moved, but this threatened to create gaps between them; they countered this by only following their man when Witsel was in position to cover them. Unfortunately for the visitors, they failed to consistently deal with the Tottenham threat in wide positions and now face a stiff task back home at the Westfalenstadion.