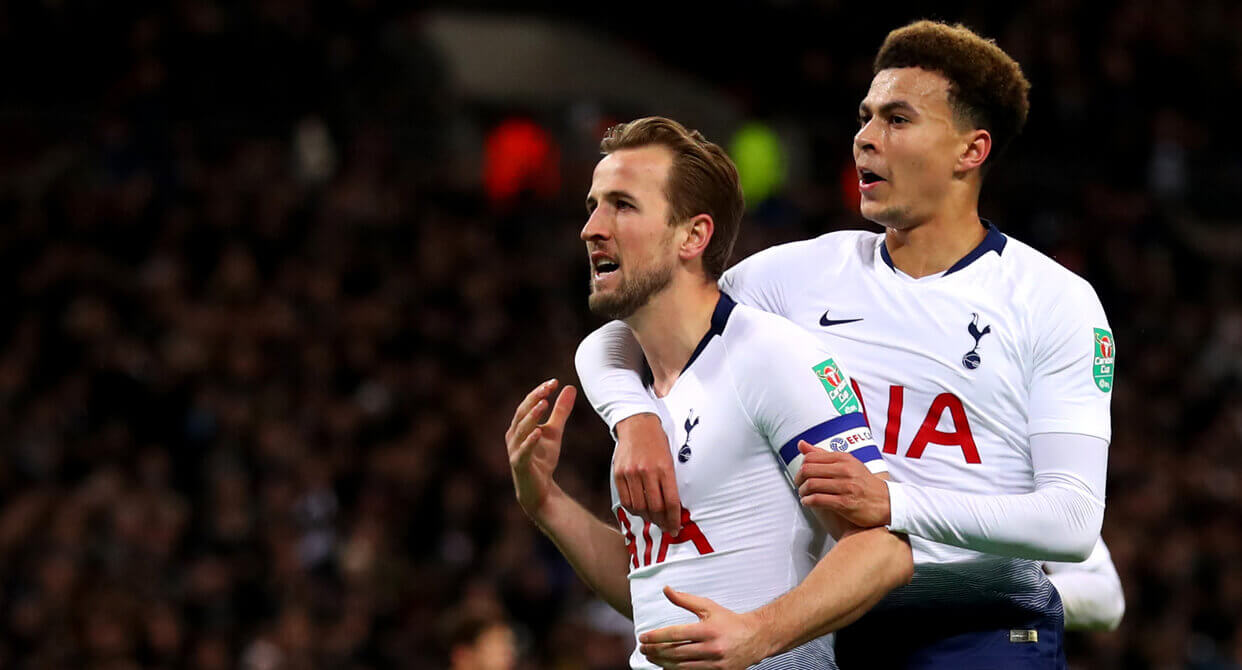 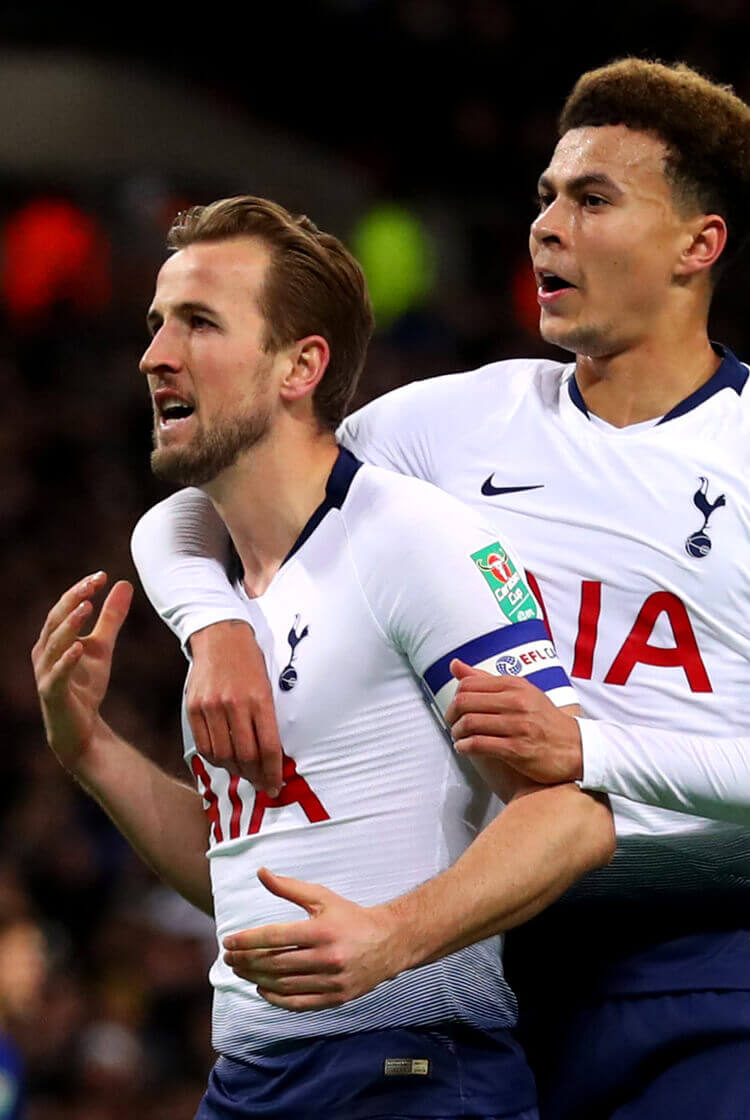 The slightly closer of the week’s League Cup semi-final clashes was at Wembley Stadium, where Tottenham secured a narrow advantage to take into the second leg against London rivals Chelsea. A cagey encounter was ultimately settled by a Harry Kane penalty midway through the first half, with debate yet again raging around the part played by VAR in its initial awarding. There was little doubting that Kane himself had been brought down by Chelsea keeper Kepa in the visitors’ area, but the argument was whether the England captain had been offside – as flagged by referee Michael Oliver’s assistant – or not. Either way, Kane duly slotted home, and Spurs were able to hold on as Chelsea pressed for an equaliser through a second half that again underlined their need for a top-class striker. The second leg, at Stamford Bridge in two weeks, will decide all. 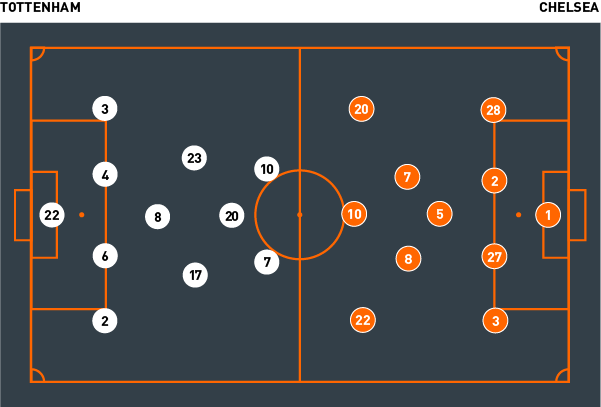 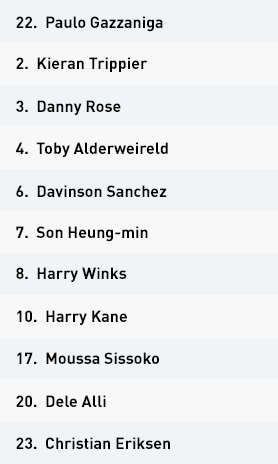 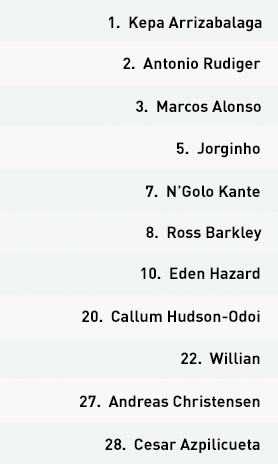 Mauricio Pochettino set his Tottenham team up in a 4-4-2 diamond formation, with Harry Winks at the base, Christian Eriksen and Moussa Sissoko either side and Dele Alli at the tip, just behind the front pairing of Son Heung-min and Harry Kane. Spurs tried to stretch Chelsea early on, with several balls in behind for the runs of Kane and Son. This became a common method of attack throughout the match, and was evident for the play that led to the penalty from which the England captain scored the only goal of the game.

The hosts looked to build from the back with short passes, and draw the Chelsea attackers and midfielders towards them. Goalkeeper Paulo Gazzaniga and centre-backs Toby Alderweireld and Davinson Sanchez were patient in possession; when the ball went into one of the centre-backs, they looked to attract Ross Barkley or N’Golo Kante towards them and use the nearby support of Winks and the full-back or midfielder on their side. This would create a three-on-two against whichever Chelsea midfielder was pressing and the wide attacker on that side, enabling Spurs to consistently bypass the press.

Winks was central to this, using his passing quality to play one-touch passes when in possession, but also moving to the blind side of the press when not on the ball to repeatedly offer passing angles around it. When he had possession of the ball centrally, the movements of Eriksen and Sissoko would determine the next passage of play. If the advanced midfielders moved away from the ball and were followed by Kante and Barkley (Alli would also move away to draw Jorginho out), then Winks would play straight through to the feet of Kane or Son. If his midfielders moved away but were not tracked, he could play in to their feet instead; if the midfielders stayed central, Winks could then clip the ball diagonally out to Danny Rose or Kieran Trippier, both of whom were happy to advance from full-back.

Out of possession, Spurs operated in the same 4-4-2 diamond, with their chief ambition being to prevent Jorginho getting on the ball and tracking the half-space runs of Kante and Barkley. Alli was tasked with man-marking Jorginho, while Kane and Son would try to block off the passing lines into the Brazilian from Kepa, Antonio Rudiger and Andreas Christensen.

As the ball went to the Chelsea full-backs, Spurs would press only mildly press with Kane and Son, leaving Eriksen free to track Kante and Sissoko to do likewise with Barkley. Whenever the ball went wide to a full-back or winger, the Chelsea midfielder on that side would try to make a penetrative run in the half-space beyond the Spurs back line – an even more dangerous tactic if Trippier or Rose had been drawn out. But Eriksen and Sissoko did a tremendous job of tracking these runs and ensuring that neither Sanchez nor Alderweireld were pulled out of their central defensive slots.

Winks’ role was just as crucial in defence, too. He was responsible for tracking the dropping movements of Eden Hazard when the Belgian chose to drift or come short. If Hazard remained in a more orthodox centre-forward position, Winks would support Eriksen and Sissoko when the ball moved out to their side. If the Chelsea full-backs created an overload (full-back, winger and attacking midfielder against Tottenham full-back and central midfielder), Winks could move across to even the numbers up. The young Englishman played a hugely important role in ensuring that his team, though second best for much of the contest, carried a one-goal advantage into the second leg of an absorbing cup semi final.

Maurizio Sarri set Chelsea up in their usual 4-3-3 shape, with Jorginho, Ross Barkley and N’Golo Kante in a midfield three behind Callum Hudson-Odoi, Willian and Eden Hazard. The latter operated in more of a false nine role than that of a traditional centre forward, as has been the case in a number of his team’s recent fixtures.

Chelsea had two main strategies in attack. The first was to drift Hazard towards one side and play balls for the attacking midfielder – Barkley or Kante – on the opposite side to attack through the half-space from deep. This would be difficult for Tottenham players to track, as the midfielders responsible for doing so would find it difficult to see both ball and man at the same time.

The visitors’ other main strategy was to play in to the feet of Hudson-Odoi, Willian and Hazard, and use their dribbling skills to draw numerous Spurs players towards the ball; this could free up spaces elsewhere, for late passes that would eliminate several players. That said, the hosts defended intelligently throughout – as a result, Chelsea’s most regular opportunities came from shots from distance or crosses.

They might have had more success with the potential of wide overloads created by their full-backs driving forwards. As Tottenham only mildly pressed Cesar Azpilicueta and Marcos Alonso, the pair could have pushed higher in possession and tried to draw the opposition full-backs or midfielders towards them – which could in turn have freed up more space for Barkley or Willian on the left, and Kante or Hudson-Odoi on the right. Even had the immediate pass been blocked off, Chelsea could then have used third-man one-touch combinations to penetrate a stubborn Tottenham defence – as they did occasionally to some success.

Out of possession, the Blues looked to press Spurs high up the pitch. Hazard would try to use his cover shadow to block off Winks, and mildly press towards Alderweireld and Sanchez but actively push on to Gazzaniga when he received the ball. Barkley was responsible for pressing Sanchez but would drop on to Winks if Hazard had chosen to press, while Kante would press Alderweireld. The wide attackers would remain deeper than the attacking midfielders and look to track Trippier and Rose, while Jorginho was responsible for Alli but would also be available to press Eriksen or Sissoko depending on where the ball was. This structure worked well for large parts of the game, as Tottenham struggled to consistently break their opponents down – it is at the other end of the pitch that Chelsea need to improve if they are to reach the first domestic final of the season.