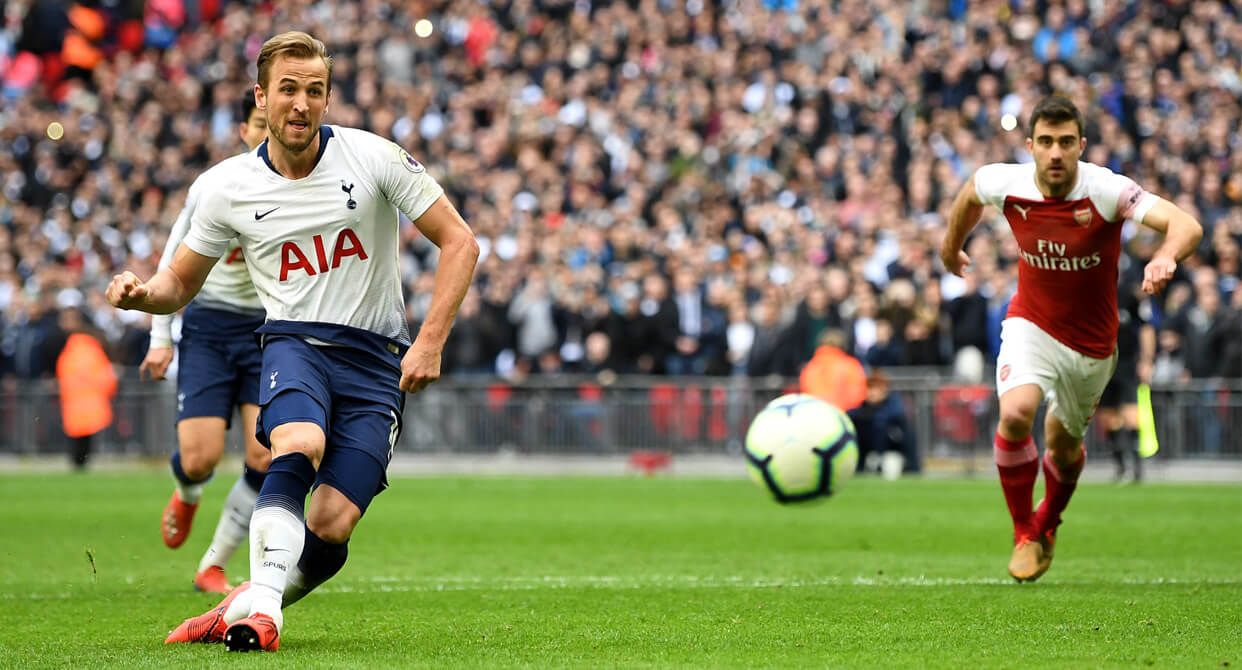 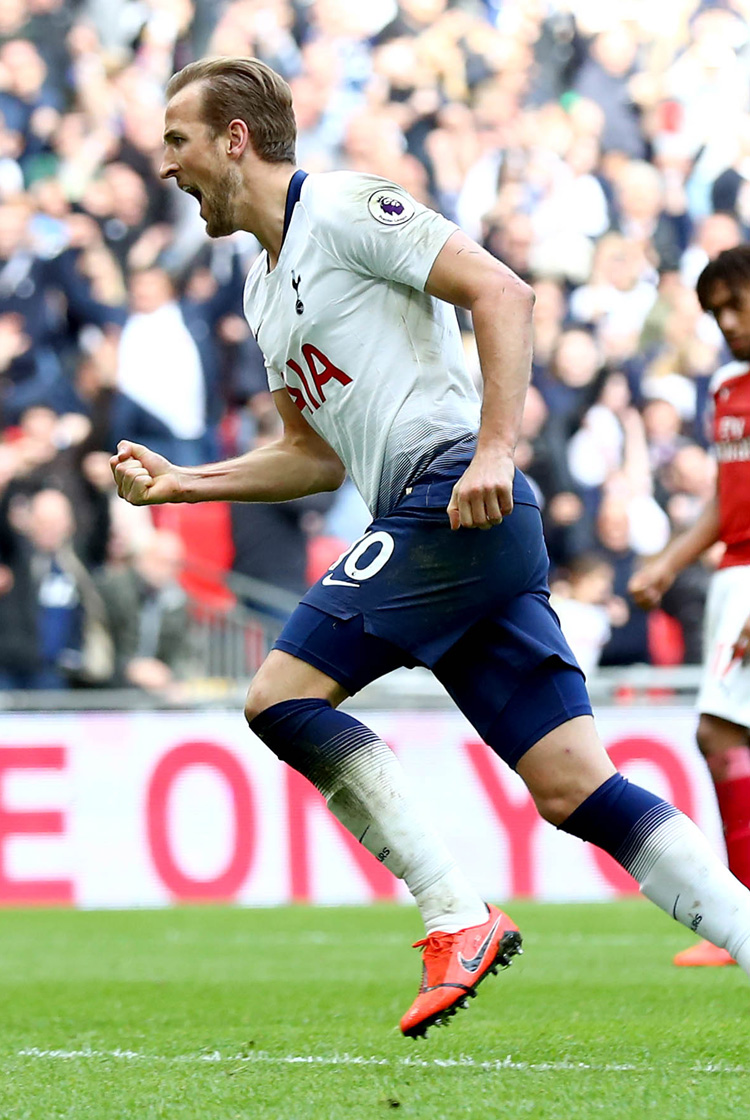 The second north London derby of the Premier League season turned into a tale of two late penalties at Wembley Stadium, with Harry Kane scoring one and Pierre-Emerick Aubameyang having another saved as honours ended even. Having beaten Tottenham 4-2 at the Emirates earlier in the season, Arsenal looked on their way to a satisfying double when Aaron Ramsey calmly slotted home after a devastating counter-attack just past the quarter-hour mark. The hosts struggled to find their best form, but drew level from the spot after Shkodran Mustafi brought down Kane – who was seemingly in an offside position – when defending a Spurs free-kick into the Arsenal area. The Gunners had a late chance to take all three points, but substitute Aubameyang failed where Kane had succeeded when having his penalty saved by Hugo Lloris. Arsenal, for whom Lucas Torreira saw red in the dying seconds, remain two places and four points behind third-placed Tottenham. 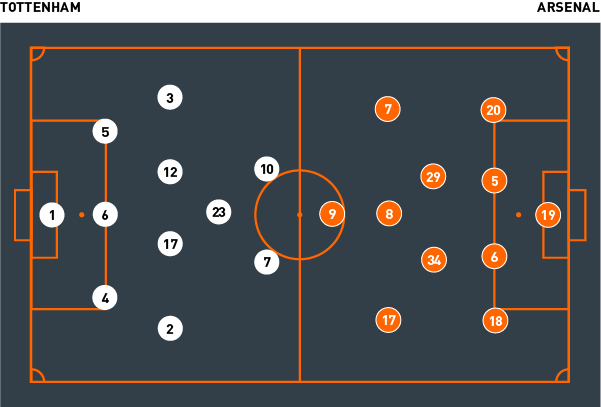 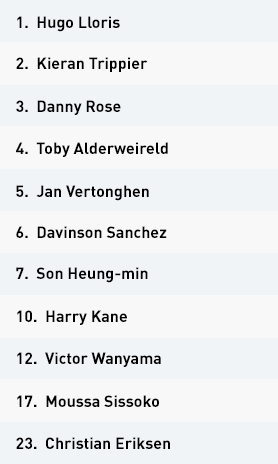 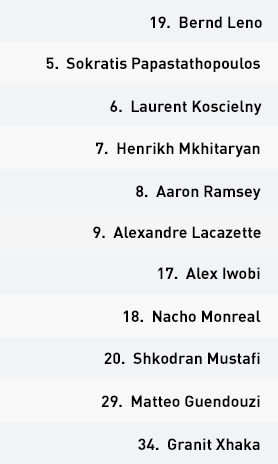 Mauricio Pochettino set Tottenham up in a 3-4-1-2 formation, with Kieran Trippier and Danny Rose providing width either side of Moussa Sissoko and Victor Wanyama. Christian Eriksen played between midfield and an attacking duo of Harry Kane and Son Heung-min.

The hosts had real difficulty trying to play through Arsenal, who protected central areas with an organised compactness. As a result, they looked to exploit the space in behind and out wide, through early passes in behind for Son and Kane to run on to. They also looked to play diagonal passes behind or around the Arsenal full-backs for Trippier and Rose to receive and cross low balls into the box. If the pass to the wing-backs was around rather than behind the Arsenal full-back, then Spurs would look to their forwards or central midfielders to offer underlapping runs and receive the next pass before playing a cross in.

When playing out from the back, Tottenham found some success against Arsenal’s press by switching the play between their three centre-backs and drawing Alex Iwobi in to press Toby Alderweireld – which in turn freed up Trippier to receive and advance the attack. The wing-backs were Spurs’ most common threat, particularly in transition; this allowed Eriksen, Son, Kane and one of Sissoko or Wanyama to support any attacks centrally.

As they chased the game, the hosts made a few positional adjustments in the second half. Erik Lamela replaced Wanyama and formed more of a front three with Son and Kane, while Eriksen dropped deeper to get on the ball more. In the latter stages, Rose moved into central midfield, with Alderweireld and Davinson Sanchez forming a centre-back pairing in between Jan Vertonghen and Trippier. This allowed Eriksen to again move further forward and play off substitute Fernando Llorente, although Spurs failed to break through the Arsenal rearguard and had only Harry Kane’s disputed penalty to show for their efforts.

Out of possession, Tottenham looked to press Arsenal high. Kane and Son took up aggressive starting positions and looked to press the centre-backs should they receive the ball. Eriksen positioned himself between Matteo Guendouzi and Granit Xhaka, and pressed their inside shoulder to force them wide in possession.

If the ball went to the Arsenal full-backs from here, Spurs would utilise one of two strategies. Either the nearest central midfielder – Sissoko or Wanyama – would press, leaving the back five to deal with Arsenal’s front four; or the wing-back on that side would push up and press, in which case the wing-back on the far side would tuck in to make a back four. The nearest central midfielder would then move into a position to screen the ball into Alexandre Lacazette or Aaron Ramsey, or track any runners looking to move beyond.

When Arsenal goalkeeper Bernd Leno had the ball in possession rather than from a goal-kick, and either Son or Kane pressed him, Eriksen would move to the deep central midfielder on the same side as the ball – this helped to make play predictable for the Spurs midfield and defence behind him. The nature of Arsenal’s attacks meant that much of Tottenham’s defending came against direct play and in collecting second balls, however.

Unai Emery set Arsenal up in a 4-2-3-1 formation, with Matteo Guendouzi and Granit Xhaka as the deep central midfielders. Alex Iwobi, Aaron Ramsey and Henrikh Mkhitaryan operated as the three attacking midfielders behind Alexandre Lacazette, who led the line.

The Gunners demonstrated limited quality in possession – they managed only 37 per cent throughout the 90 minutes – but generally looked to play into the feet of their attacking midfielders in wide areas. They could then look to use the runs of Ramsey or Lacazette to either create space in behind for them to finish or simply run on to. The most common route in this approach was direct from goalkeeper Bernd Leno in to Iwobi on the left, rather than through a congested midfield.

The visitors also tried to utilise the counter-attack where possible, which is how they took an early lead – Davinson Sanchez lost possession on the halfway line, from which Lacazette played in Ramsey to finish confidently. Perhaps not surprisingly, Arsenal looked to use this strategy more frequently as the game progressed and they still had a lead to defend. Dropping deeper out of possession increased the space they had to attack in behind Tottenham on transition, where the added pace of substitute Pierre-Emerick Aubameyang offered a late threat. Unfortunately for the Gunners, Aubameyang failed to earn them a late win from the penalty spot after he had been fouled by Sanchez.

Out of possession, Arsenal initially began by pressing Tottenham high. Lacazette was positioned centrally, with Ramsey picking up Wanyama behind him and Iwobi and Mkhitaryan tucked in, leaving Alderweireld and Vertonghen free to receive. When the ball went to the outside centre-backs, Ramsey would leave Wanyama and jump up to press, with the wide attacking midfielder ready to press his opposite wing-back and one of Xhaka or Guendouzi (later Lucas Torreira) in a position to affect two of Sissoko, Wanyama or Eriksen.

Occasionally, the visitors found themselves getting their press wrong, and using Iwobi or Mkhitaryan to press the outside centre-backs. This allowed a free pass to Trippier or Rose beyond them, who could continue the attack. The Gunners eventually adjusted to this by using one of two methods. Firstly, Iwobi or Mkhitaryan would drop off as the ball was being switched, allowing the outside centre-back to receive but giving the other Arsenal players time to get across and form the mid-block.

Alternatively, they would still use the wide midfielders to press the outside centre-backs, but would then push their full-backs up to press the Tottenham wing-backs. This would leave a potential threat in behind, but also reduce the time and space for the Spurs players on the ball.

The visitors operated in much more of a mid-block as the game progressed, and tried to restrict space in central areas. They pulled themselves into a 4-4-1-1/4-4-2 structure, with Ramsey either just behind or on the same line as Lacazette, and Iwobi and Mkhitaryan tucked in either side of Xhaka and Guendouzi.