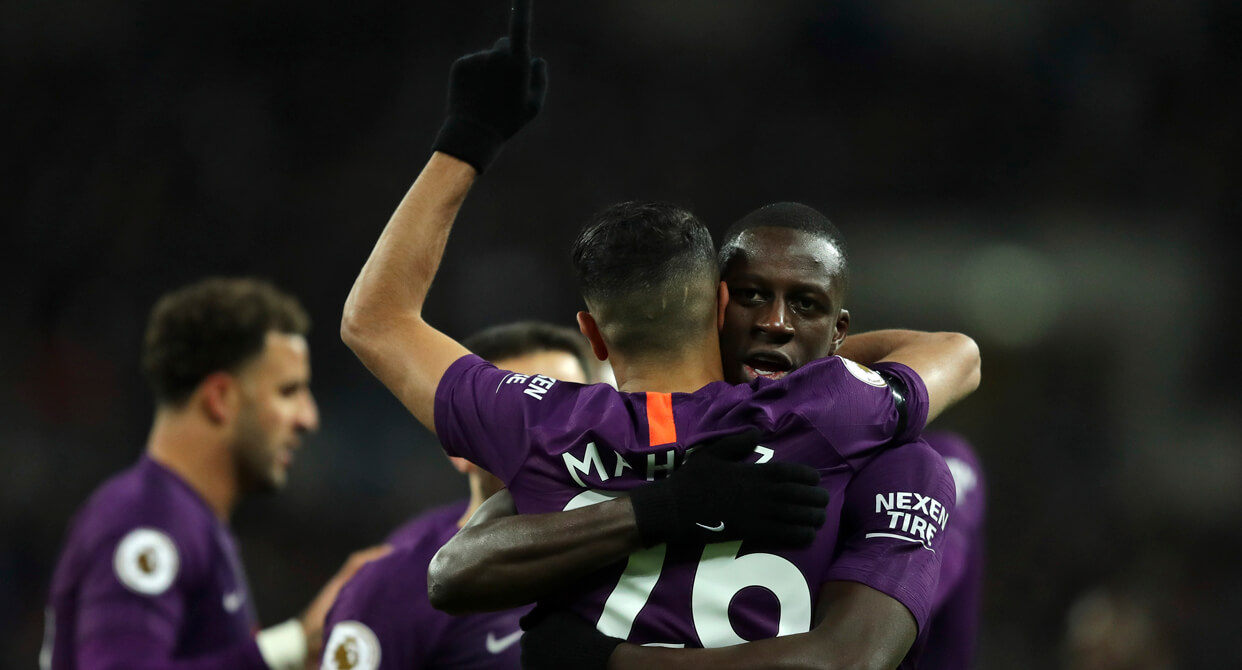 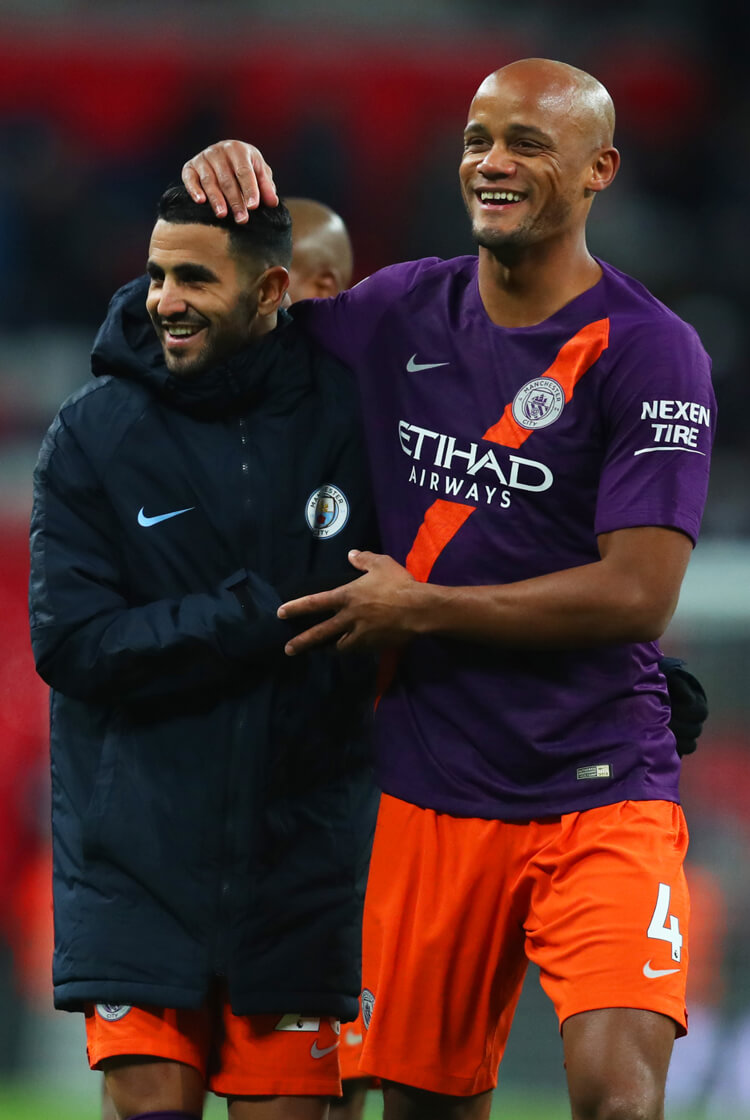 Riyad Mahrez’s sixth-minute strike at Wembley was enough to see Manchester City return to the top of the Premier League with victory over Tottenham. The former Leicester City forward met the cross of Raheem Sterling and dedicated his finish to Foxes owner Vichai Srivaddhanaprabha, who was tragically killed in a helicopter crash at the King Power Stadium on Saturday night. Erik Lamela wasted a brilliant opportunity to equalise late on – but he blasted his effort over the bar, with the ball appearing to bobble just before it reached his foot on a pitch that had only one day earlier hosted an NFL encounter. City were nonetheless the superior side throughout, and Pep Guardiola will only wish his players had been more clinical in front of goal. 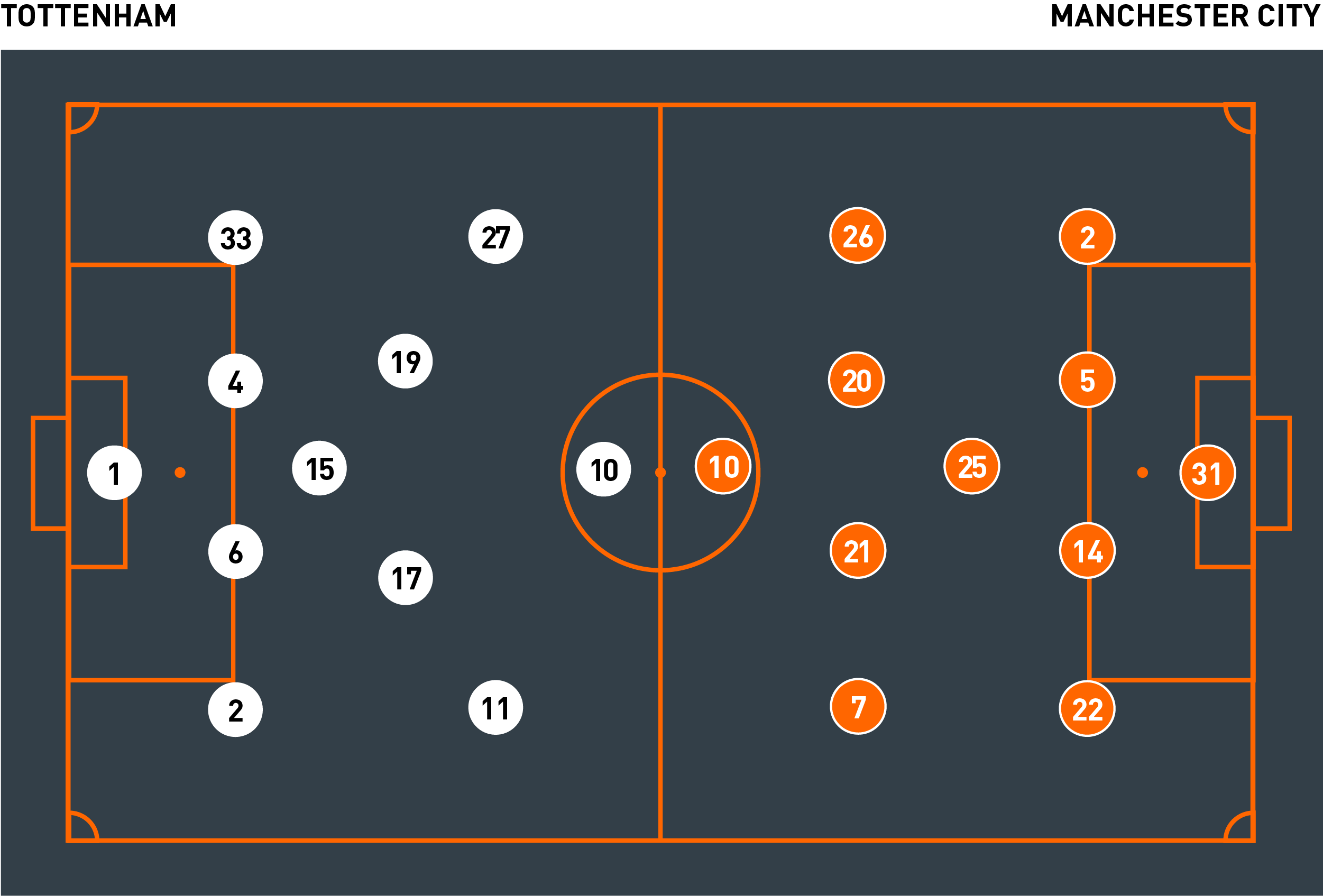 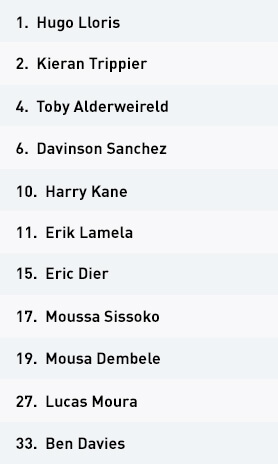 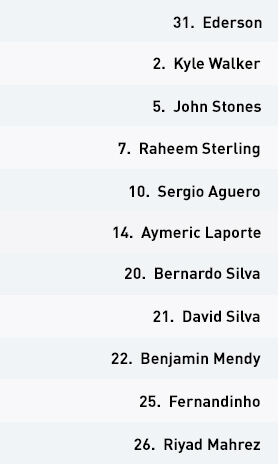 Tottenham set up in a loose 4-3-3, with Eric Dier, Mousa Dembele and Moussa Sissoko as the midfielders, but each tasked with very different roles within the unit. Lucas Moura, Erik Lamela and Harry Kane comprised the front line.

Dier would regularly drop into a false centre-back or false full-back position to push Kieran Trippier and/or Ben Davies further up the pitch to provide attacking width. Dembele would act as more of an anchor in midfield – in a position to link play between defence and midfield, and to add immediate security in front of the defence should possession be lost. Sissoko was more of an attacking option who would regularly position himself high up in the right half-space. The Frenchman offered dynamism on the counter-attack and a good threat to win first and second balls when playing direct.

The long ball was a common feature for a Spurs team that struggled to evade City’s high press. The introduction of Harry Winks and Dele Alli midway through the second half made playing through midfield a more plausible strategy; before that, however, the hosts tended to play long.

When they did manage to play out, the movement ahead of the ball was limited both individually and collectively – and this only contributed to their lack of creation. Spurs could have improved their recording of just one shot on target over the 90 minutes, had their end product and decision-making in the final third been of a higher standard. Overall, the hosts were inconsistent in possession and struggled to create chances through quality build-up play, instead feeding off individual Manchester City mistakes and counter-attacks.

Out of possession, Tottenham switched between a 4-4-2/4-1-4-1 high press and a 4-4-2 mid-block. When pressing in a 4-4-2, Lamela would play on the highest line with Kane; when pressing in a 4-4-1-1, the Argentine would drop slightly deeper to affect Fernandinho. Lucas Moura would tuck into the left side of the midfield line of four, with Sissoko on the right and Dembele and Dier in the centre.

Spurs would look to press City aggressively and force them into longer passes, although this left the space behind the back line vulnerable. In the second half, they were much more compact and more difficult to break down – but the damage was done early and they were unable to prevent the visitors condemning them to a third Premier League defeat of the season.

Manchester City set up in a 4-1-4-1 formation, with Riyad Mahrez, David Silva, Bernardo Silva and Raheem Sterling operating just behind Sergio Aguero. Fernandinho played in his familiar position between the defensive and midfield lines.

City looked to target the half-spaces and wide areas, where the rotation and fluid movements of their attacking players created opportunities to play in behind full-backs Kieran Trippier and Ben Davies. These attacks could come via build-up through the thirds or direct from goalkeeper Ederson.

Fernandinho could often be seen dropping in between centre-backs John Stones and Aymeric Laporte, enabling one full-back to push up while the opposite full-back drifted in to the centre of the pitch to maintain balance. This also allowed Bernardo Silva and David Silva to remain in more advanced positions.

Mahrez and Sterling would tend to stay wide, but could often be seen dropping deeper to combine with the more central players before accelerating in behind their full-back. Aguero, meanwhile, was unselfish in his movement to create space for others. The Argentina international would drop from central positions to allow Sterling to make runs in behind the defence; he also made runs in between the full-back and centre-back to pull the Spurs defence out from the centre and create space for runners from deep.

Out of possession, City set up in a 4-1-4-1 for the most part, but would often distort this shape when pressing high and with intensity and aggression. Aguero would generally lead the press, although Bernardo Silva could also be seen doing this when Spurs played out to their left-hand side.

Their high press was man-oriented. David Silva would look to affect Davinson Sanchez; Bernardo Silva was on Dembele, Sterling on Trippier and Mahrez on Davies. If the ball went into Toby Alderweireld’s feet, Mahrez would sometimes jump from Davies to close the centre-back down, at which point Kyle Walker would push higher to affect Davies. Mahrez would also ensure that, as he pressed Alderweireld, he would be screening the ball into Davies’ feet.

City would look to show Spurs out wide and flood the area with bodies in order to regain possession as soon as possible. Their press worked to such an extent that Tottenham resorted to direct balls for much of the contest. On a truly terrible pitch, the visitors managed the game well after taking their early lead; they will have been delighted to leave with the three points that took them back to the top of the table.