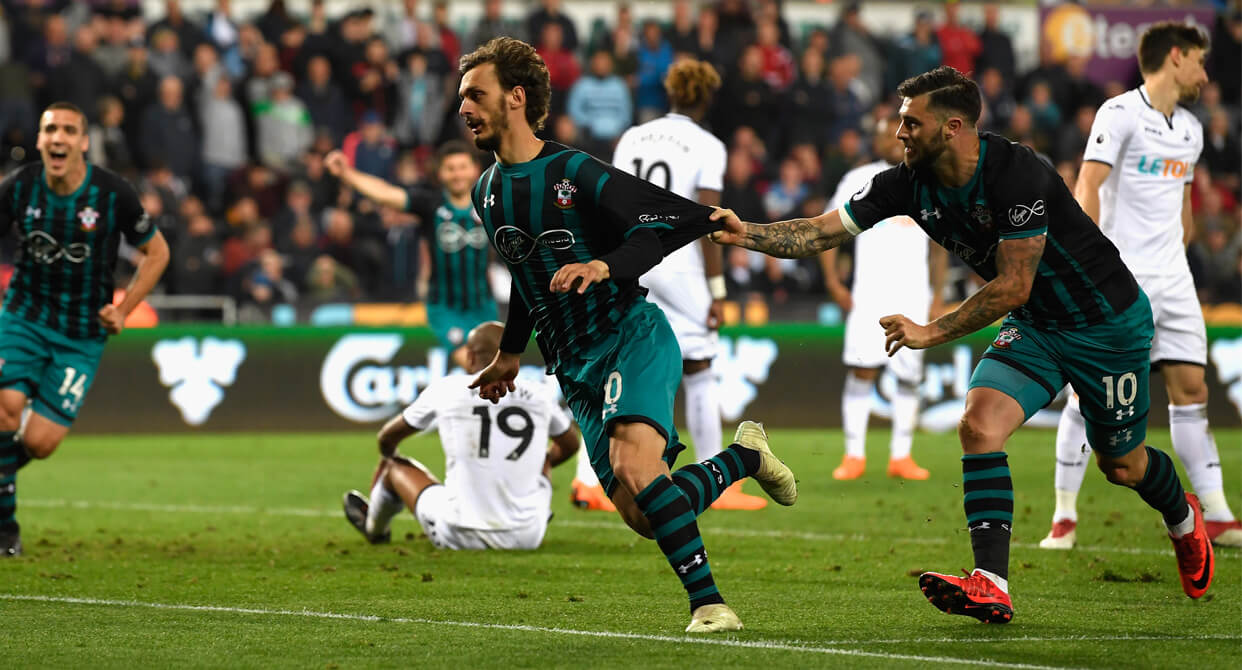 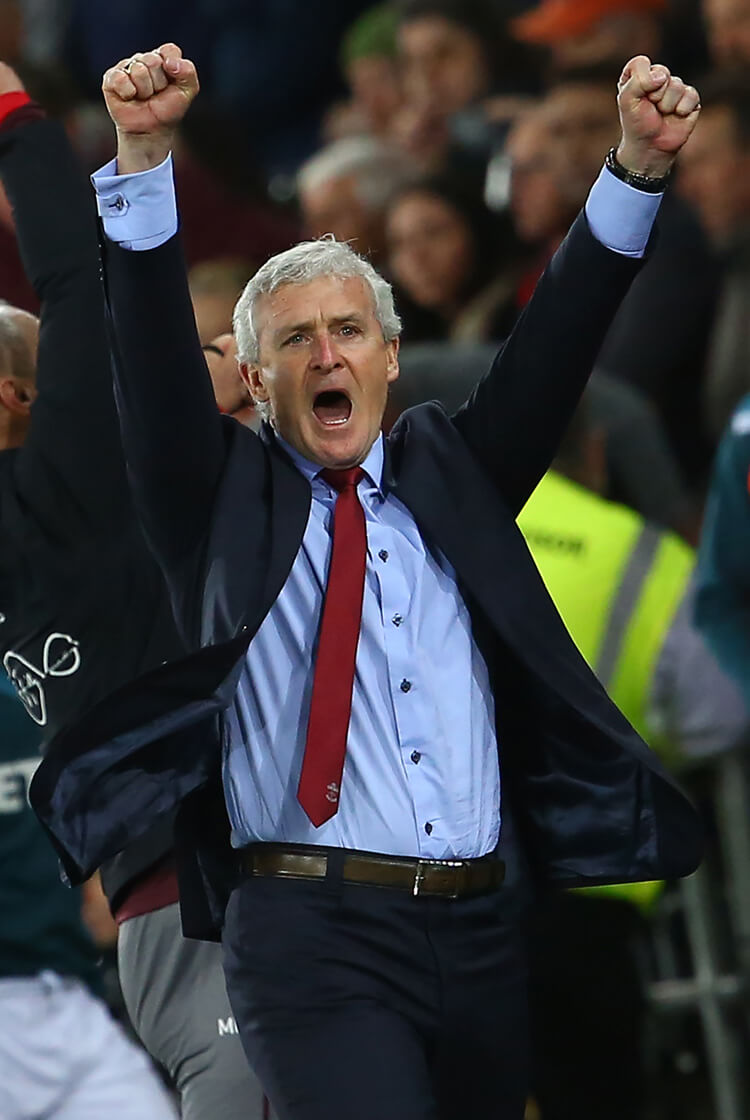 This was a Premier League encounter that neither team could afford to lose, as Southampton all but confirmed their own safety – and Swansea's drop to the Championship – with a narrow 1-0 victory at the Liberty Stadium. Manolo Gabbiadini came off the bench to score the winner in the 72nd minute – a goal that means the Swans are, barring a goal-difference miracle on Sunday, going to take the final relegation spot. Here, our professional coaches analyse the tactics and key moments from Southampton's win – and assess what went wrong for Carlos Carvalhal, who has since announced he will leave the club at the end of the season, and Swansea. 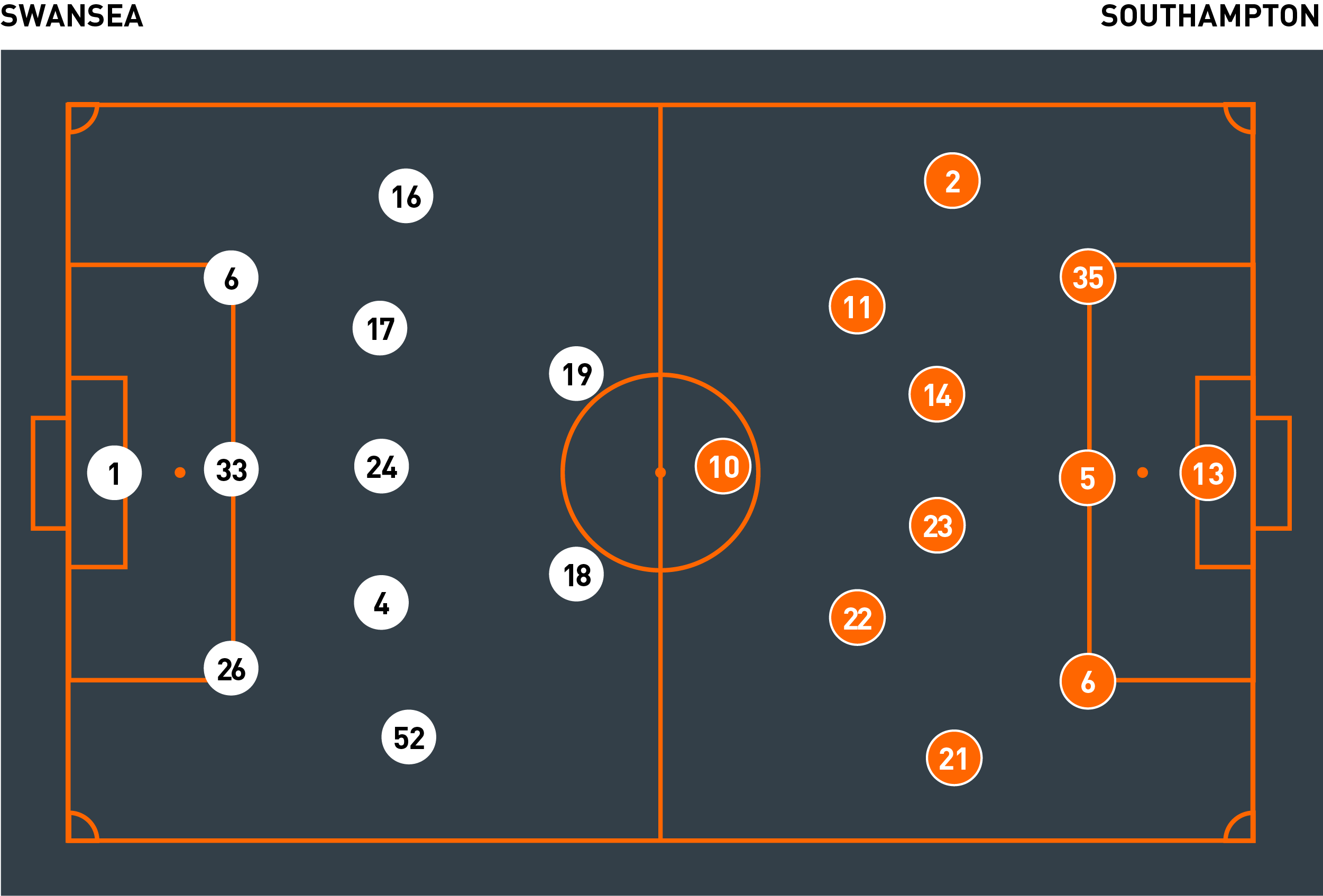 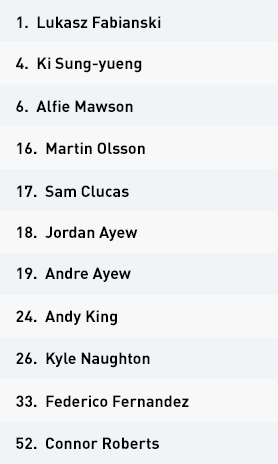 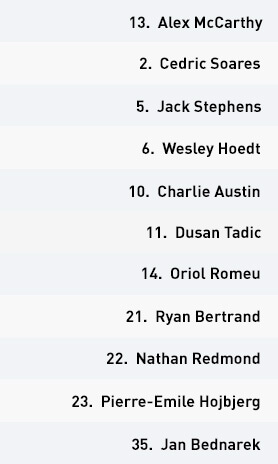 Swansea City set up in a 3-5-2 formation. Recovering movements from wing-backs Martin Olsson and Connor Roberts created a defensive back five when needed.

Throughout the first half, however, the home side’s attack was ineffective. Their final-third entries often came in wide areas – which seemed unintentional, as though they were forced towards the wing-backs rather than actively looking for them.

Olsson and Roberts often found themselves with slightly more space, which encouraged passes out wide. This avoided the Saints’ central midfield underload and forced Swansea’s wing-backs to deliver crosses into the penalty area. But, with minimal attacking threat, the hosts rarely troubled the Southampton defence or goalkeeper.

Although inefficient in attack, Swansea were, for the most part, effective when defending, particularly during transitions towards their own goal. This limited Southampton’s attacks, as they prioritised defensive clearances over expansive build-up play from deep.

Until Tammy Abraham was introduced midway through the second half, Swansea looked poor in front of goal. Abraham provided the aerial threat they had looked desperate for. During the build-up phase, Abraham powerfully attacked the longer balls, flicking them into the path of midfield runners from deep. The on-loan Chelsea striker was also a threat from crosses into the area, forcing Alex McCarthy into two instinctive parries late on.

Despite late pressure, neither Abraham nor Swansea could penetrate Southampton’s defensive block, as the home crowd were forced to accept a defeat that all but confirms their relegation from the Premier League.

Southampton set up in a 5-4-1 formation. Wing-backs Ryan Bertrand and Cedric Soares moved higher into midfield when in possession, which enabled Nathan Redmond and Dusan Tadic to move into more central areas.

Both teams set up with an initial back three and wing-backs, and Southampton appeared to man-mark players within the central lane of the pitch. Their defence allowed both of Swansea’s wing-backs to move forward, presenting them with slightly more space than the rest of their opponents’ attack.

Naturally, Swansea then moved the ball towards their own wing-backs. But the Saints were happy to allow crosses into their penalty area, knowing their opponents lacked an aerial threat – particularly with Tammy Abraham left on the bench.

Southampton built using short passes in attack, looking to avoid the central area during the initial build-up stage. They moved the ball quickly into the channels before returning to the centre of the park to play around Swansea’s midfield block.

The width provided by Cedric and Bertrand enabled Tadic and Redmond to drift inside, often finding effective spaces in between Swansea’s units. Southampton lacked a consistent final ball, though, and only created half-chances throughout the first half.

Recognising this, Mark Hughes introduced Shane Long and Manolo Gabbiadini in attack – and the away side immediately fired crosses into Swansea’s penalty area. With natural goalscorers now flooding the penalty area, Southampton’s threat was increasing.

Midway through the second half, they took the lead. A routine corner wasn’t cleared, as the Saints won the first and second headers. Charlie Austin powered an acrobatic volley on goal, which Lukasz Fabianski did well to initially save – but he couldn’t prevent substitute Gabbiadini from bundling home what would be the only goal of the game.

Swansea reacted with intense pressure, as they looked to force an equaliser. Southampton’s wing-backs reduced their marauding forward runs and converted into a solid back five. Austin remained the only player to stay high up the pitch and held the ball up well, as the Saints ran down the clock to seal a vital win in their battle to evade the drop.

The key battle centred on the differences in the two teams’ build-up play. Swansea elected to use more direct, longer passes into their front line – but these initially proved wasteful, as both Jordan and Andre Ayew struggled to win any headers or knockdowns. Despite this, Swansea’s midfield was proactive in their hunt for the second ball. They consistently overloaded Southampton’s central midfield duo and transitioned into attack much closer to the away side’s goal.

From here, Swansea utilised their wing-backs, who had the most attacking space, by firing crosses into Southampton’s penalty area. But, in a similar fashion to the initial long balls, Jordan and Andre Ayew struggled to win any attacking headers against their opponents’ powerful central defence.

This created the space into which Tadic and Redmond could move. While they lacked a crucial final ball during the first half, they provided much more effective deliveries in the second half. They got their reward after fast and purposeful attacking play won them a corner, from which substitute Manolo Gabbiadini eventually grabbed their winning goal.