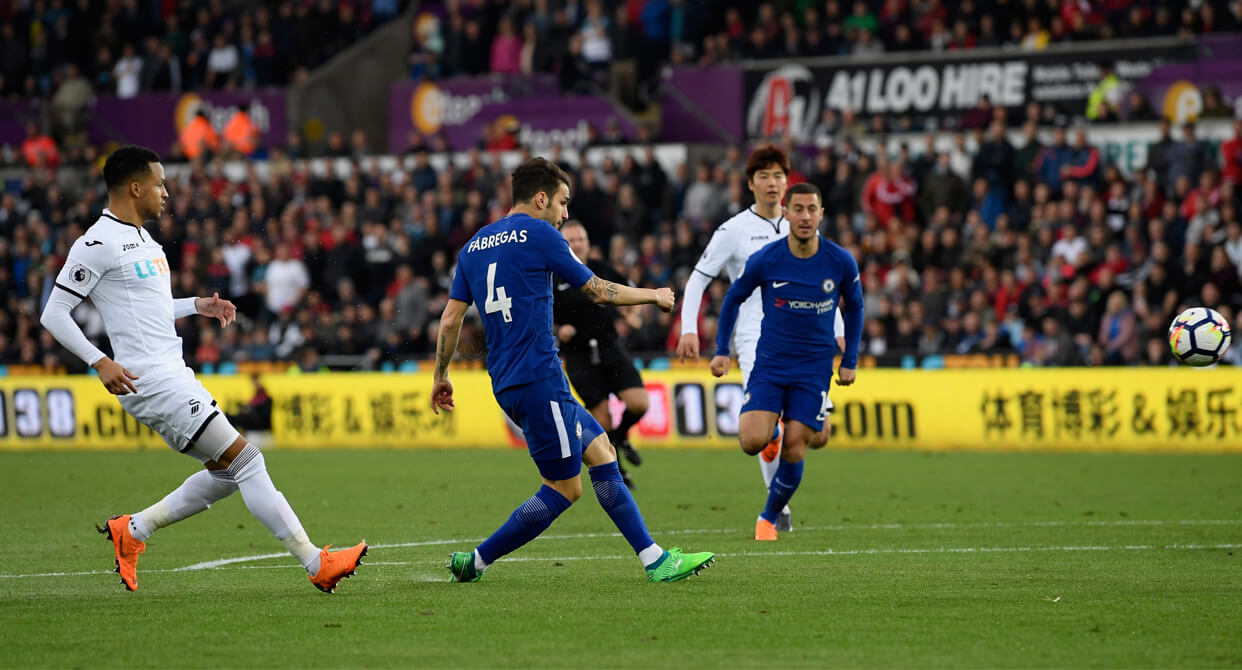 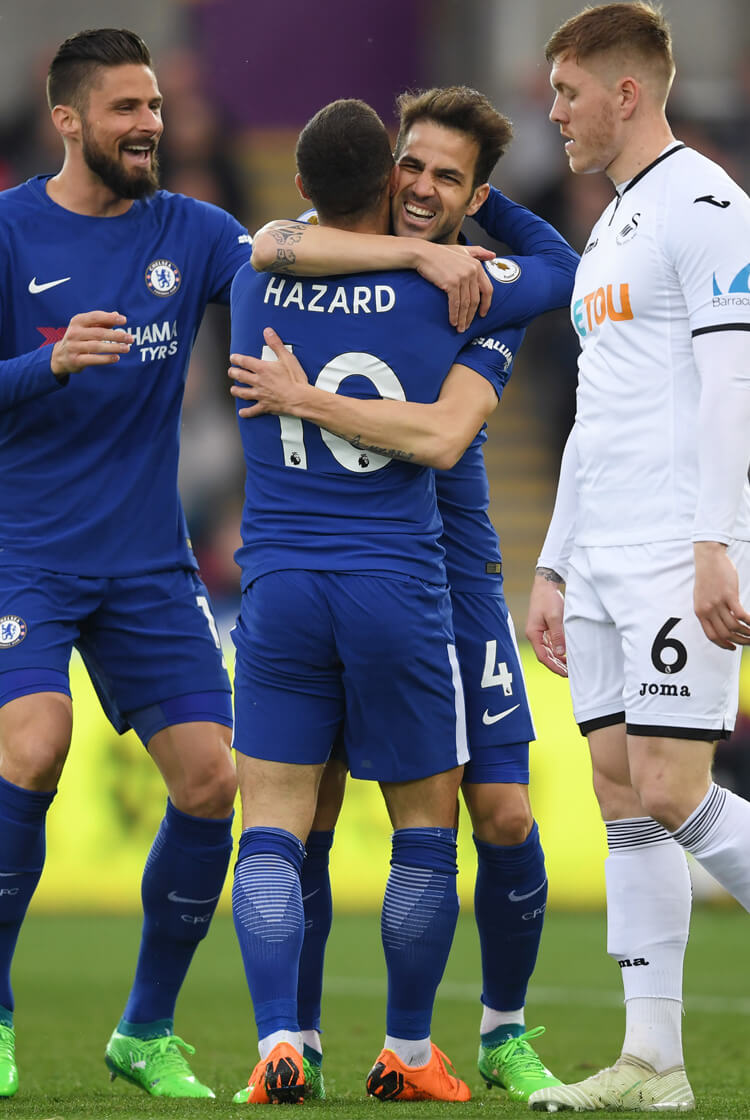 Cesc Fabregas' 50th Premier League goal proved the difference as Chelsea sealed a narrow victory over fourth-from-bottom Swansea City. The Blues midfielder opened the scoring in only the fourth minute, but his finish was enough to win all three points for the visitors. With three matches remaining, Antonio Conte's team kept their hopes of breaking into the top four alive. Swansea sit only one point above Southampton in 17th position, and their fate could be decided on the final game of the campaign, when they host Mark Hughes and the Saints. Here, our professional coaches analyse the tactics and key moments from the Liberty Stadium. 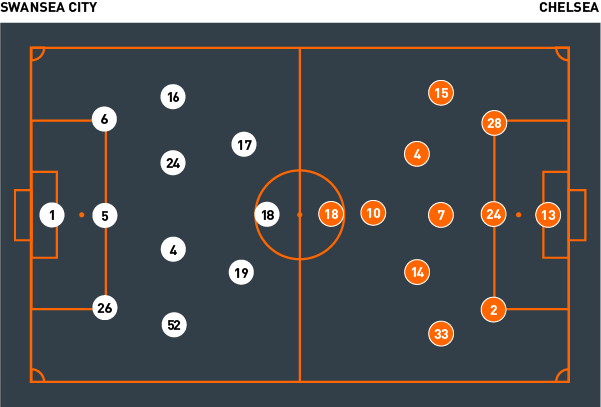 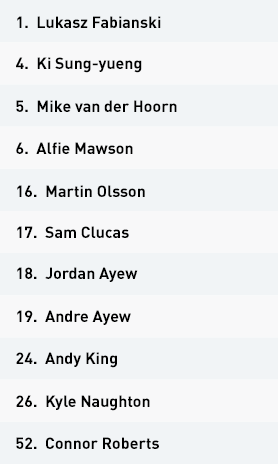 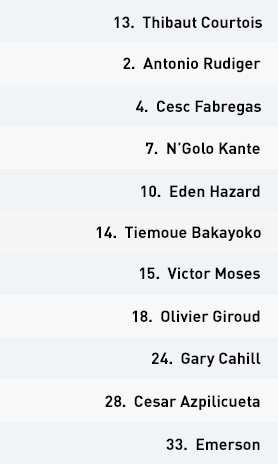 Swansea began in a 3-4-3 system and dropped into a lower 5-4-1 block defensively. Sam Clucas and Andre Ayew tucked in narrow to support Andy King and Ki Sung-yueng against the heavy central overload from Chelsea.

In their initial build-up, it was clear Swansea wanted to utilise King and Ki to play through the Chelsea press and link the forward play. Twice in the opening four minutes, however, both midfielders made mistakes; an error from King led to Cesc Fabregas scoring what would be the winning goal.

Andre Ayew and Clucas would often drift into central areas during Swansea’s build-up play, in front of the Chelsea midfield line. The wing-backs offered width, but rarely ventured too far forward. As a result, most of Swansea’s players would move towards the ball, with few challenging Chelsea’s back five with movement. Chelsea comfortably maintained their defensive structure, as the home side moved the ball with minimal penetration in the final third.

Tiemoue Bakayoko, N’Golo Kante and Cesc Fabregas effectively shifted horizontally to create positive defensive overloads in the wide areas for Chelsea. This did leave space on opposite sides of the aforementioned trio, but Swansea were too slow to switch the point of their attack, and Chelsea were astute in locking their opponents to one side.

Swansea did begin to take control of the game in the first stages of the second half, however. Connor Roberts and Martin Olsson became more attack-minded wing-backs, and played higher up the pitch to challenge Emerson and Victor Moses.

This allowed the Swans’ three attackers to play closer together and threaten Chelsea’s back three. Ki often drifted to the right-hand side in an attempt to shift Antonio Rudiger into wide areas, and create two-versus-two situations against the remaining two centre-backs. King’s importance in midfield grew as Swansea became vulnerable to the counter-attack.

The home side moved to a 4-3-3 system just after the hour mark. Tom Carroll replaced Roberts, as Naughton took over at right-back. An increase in attacking numbers didn’t have the desired impact, however, and Chelsea forwards Eden Hazard and Olivier Giroud frequently found themselves in two-versus-two situations in transition.

Swansea dominated the later parts of the game, as Chelsea switched to 5-4-1 to see out the win. But while the hosts came close, the away team's defensive line dealt well with the pressure.

Chelsea began with a 3-5-1-1 system, with Eden Hazard operating in more of a free role in front of the central midfield three and behind lone forward Olivier Giroud.

The Belgium international’s influence in this position was almost immediately felt, when his reverse pass to Fabregas led to the midfielder scoring in the fourth minute. It was clear that Antonio Conte had given Hazard the licence to drop and receive the ball with freedom. Away from this, he worked well with Giroud in making clever opposite movements when the striker came deep.

Chelsea were dangerous down the right flank when playing against a lower block, where Victor Moses was often joined by Cesc Fabregas. Cesar Azpilicueta took up a high position to offer support and help create overloads on that side, too. Giroud was the natural focal point for any resulting crosses.

But it was a mix in the visitors' attacking play that proved problematic to Swansea in the first half. During longer and more structured build-up, Hazard would drop to link with Fabregas, who controlled the tempo and rhythm of the attacks, while opening Swansea centrally. The visitors weren’t against a more direct approach, either. At times, the longer pass was played in to Giroud, who connected well with Hazard and gave Chelsea the option to bypass Swansea’s central block.

As Swansea began to take control of possession in the second half, Chelsea dropped to a lower 5-3-2 block, and played more often on the counter-attack. The Swans were astute in cutting out the key supply to Hazard and Giroud – but, on a number of occasions, clever movement from Hazard allowed Chelsea to find him early. The Belgian was particularly effective at driving centrally with the ball and opening the space for runners to overload on the break.

After Swansea’s change to a 4-3-3 set-up, Chelsea’s threat remained on the counter-attack. Giroud’s importance as a target man grew, and he did well to win long balls from the back to retain possession higher up the pitch.

Chelsea switched to a lower 5-4-1 to see out the final 15 minutes, as Pedro and Willian replaced Fabregas and Hazard. There were few counter-attacks, but the back three of Antonio Rudiger, Gary Cahill and Azpilicueta were excellent in absorbing late Swansea pressure.

Chelsea capitalised on early mistakes in possession from Swansea to take the lead, and from here took control of the midfield areas. Eden Hazard dropped lower and created overloads while Swansea struggled to create, as their front three often dropped lower to receive. With little support from either wing-back or the midfielders, Chelsea’s back three were untroubled.

Carlos Carvalhal changed the emphasis after half-time, however, and with the wing-backs becoming more dynamic and Ki Sung-yueng joining more attacks, Swansea’s front three could challenge Chelsea’s back three. They began to open up the game and create chances. This in turn provided good counter-attacking opportunities for Chelsea, with Olivier Giroud and Hazard influential in these transitions.

Swansea adapted their system and took more risks in trying to get something out of the game later on, but Chelsea dropped to a low block and their three central defenders were excellent in dealing with late pressure and any crosses in to the box.