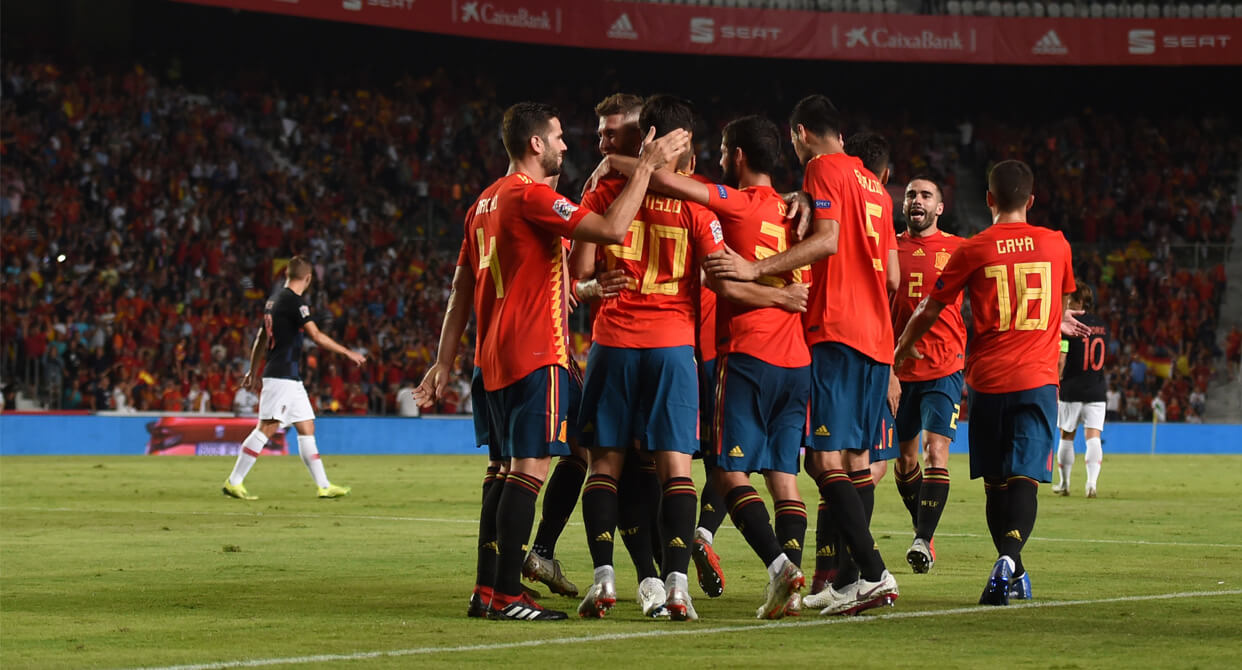 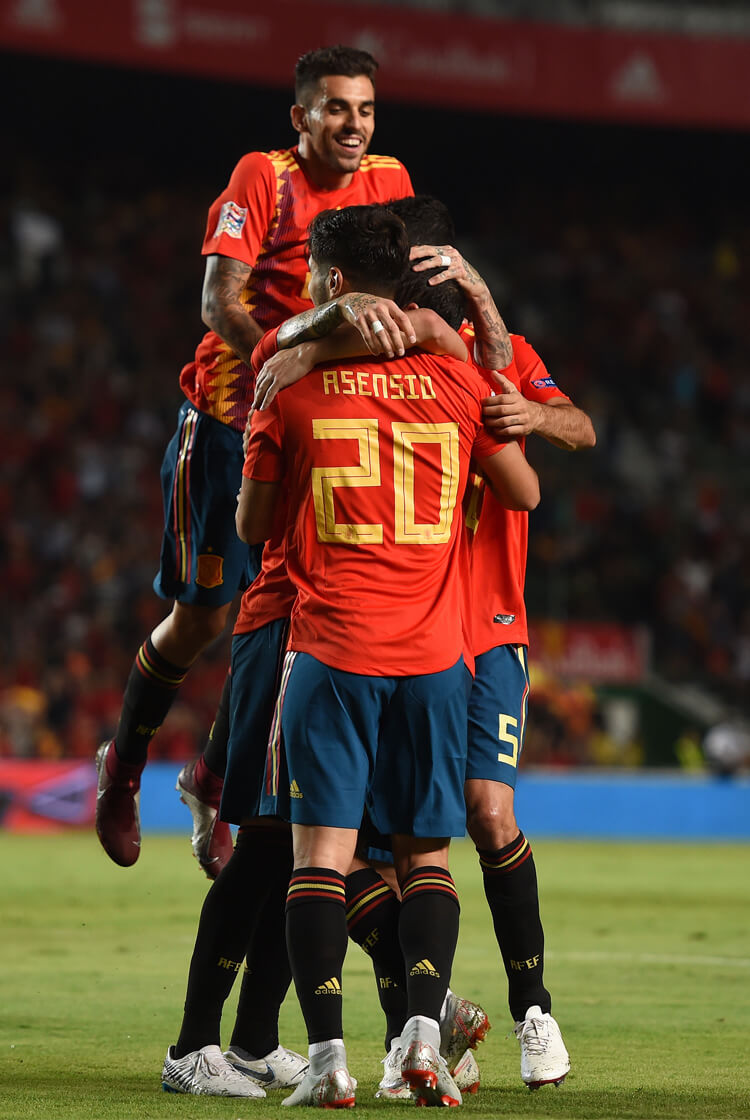 Spain maintained their winning start to the Nations League by following up their victory over England with a six-goal masterclass against Croatia at the Martinez Valero Stadium in Elche. In a relentless display against a team that only a couple of months earlier had fought their way to the World Cup final in Russia, La Roja showed their determination to regain their status among the elite under new coach Luis Enrique. Saul opened the scoring with a header in the 24th minute; Marco Asensio, who also grabbed three assists, fired in the second from 20 yards before seeing another strike hit the back of the net off the back of goalkeeper Lovre Kalinic moments later. Rodrigo, Sergio Ramos and Isco added second-half strikes, leaving Spain comfortably top of Group A4 with six points from their opening two games. Croatia and England will be hoping to get their first points on the board when the pair meet at Wembley in November. 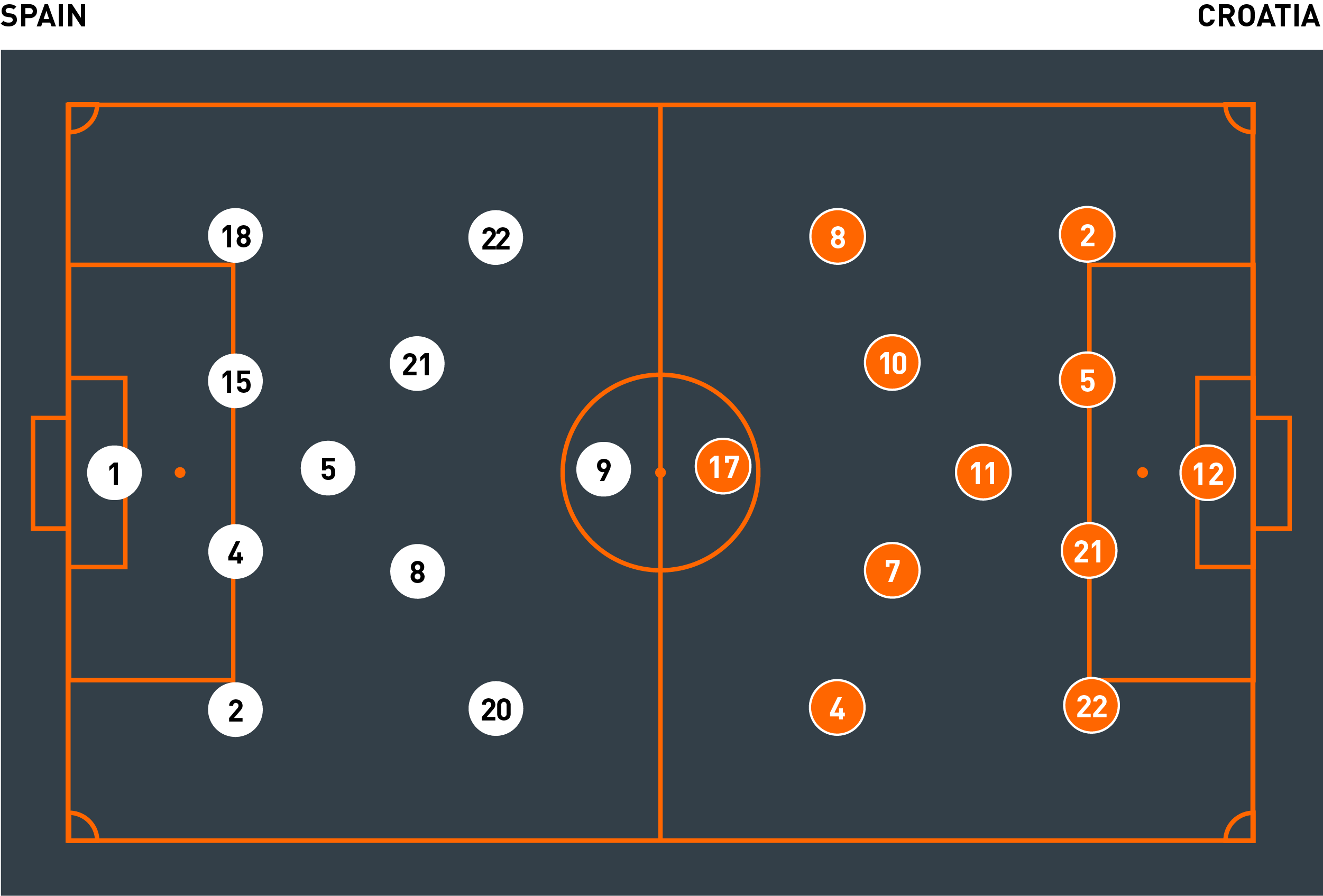 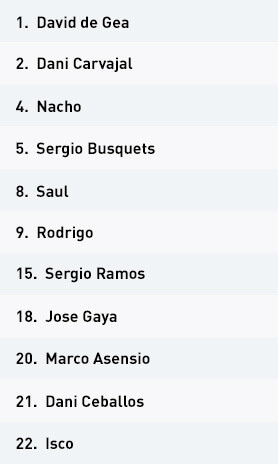 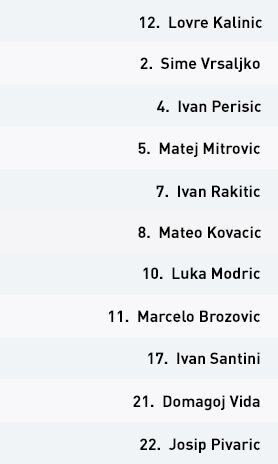 Spain set up in a 4-3-3 formation, with Sergio Busquets, Dani Ceballos and Saul forming the midfield three. The Real Madrid pair of Isco and Marco Asensio supported Rodrigo in attack.

La Roja were exceptionally patient in possession and demonstrated their superior technical quality throughout the match, keeping the ball for large periods and finding gaps through which to penetrate on numerous occasions. They favoured building on the left side before switching play to close the attack on the right side, where the partnership of Dani Carvajal and Asensio flourished against left-back Josip Pivaric.

When building centrally, Saul would position himself between the lines, while Rodrigo and one of either Asensio or Isco would occupy the back line while the other could drop and assist the build-up. The Spain players were extremely adept at finding gaps and adapting to Croatia’s out-of-possession movements. Penetrative ground passes through the middle, diagonal switches from left to right and passes around the defence were effective in carving open their opponents and creating opportunities. They also threatened with through balls in behind from deep, for the runs of the forwards and full-backs. Luis Enrique’s team demonstrated a real versatility in their attacking play.

The hosts remained in their 4-3-3 shape out of possession. The only slight difference was to deal with the role of Ivan Rakitic when Croatia tried to build – here, Saul joined the front line of the press as opposed to Isco or Asensio. The player who happened to be on the right at that time would remain deeper, in a position to disturb Pivaric at left-back.

Spain’s dominance, however, meant they rarely spent time in an out-of-possession structure – and when they did, they were quick to turn defence into attack. Their second goal, for example, came as a result of an error forced upon their opponents by their high press.

Enrique has made an imposing start to life as head coach, inflicting defeat on England and Croatia in his opening two games. Few will taste sweeter than a six-goal thumping of a side that only two months earlier had featured in a World Cup final.

Croatia set up in a 4-3-3, which included their World Cup trio of Marcelo Brozovic, Ivan Rakitic and Luka Modric in midfield. Mateo Kovacic, Ivan Perisic and Ivan Santini formed the front three, where the threat and quality of both Ante Rebic and Mario Mandzukic was sorely missed.

In possession, they required positional movements to form their structure. Rakitic would drop in between centre-back Domagoj Vida and left-back Josip Pivaric, which allowed the latter to push forward and operate as a winger. Perisic could then push inside to play as a forward with Santini, while Kovacic dropped a little deeper on the right-hand side to assist the midfield and compensate for the absence of Rakitic.

They showed an initial bias to the right-hand side when building, where they tried to flood the area with bodies – this also lent itself to initiating a counter-press, should they lose possession. The issue with this, however, was that they lacked the quality to break their opponents down and create any chances of note. This was evidenced by their one shot on target – a tame effort from 40 yards in the second half from Santini.

Out of possession, they set up in a 4-1-4-1 mid-block, with Brozovic between the lines and Perisic and Kovacic tucked in alongside Rakitic and Modric. They would press the hosts high from their goal-kicks – but this was a structure Spain had few problems bypassing. Notably, the switch in play from their opponents’ advancing full-backs was hugely problematic; they committed too many players to wherever the ball was; with their frequent failure to regain possession, they were thus left exposed on the far side.

In an attempt to combat this, they opted to play with a back five and spread their back line across more. Kovacic would drop in to the right-back position, while the rest of the defensive line would shift across one position each to allow them to cover the width of the pitch and reduce their vulnerability to the switch. This was not consistently carried out, though, and Spain adapted with ease to any such tweaks.

Croatia performed with improved balance in the second half, but demonstrated minimal interest in chasing the ball, instead focusing their efforts on simply trying to close any gaps to keep the score down. They were outclassed and outsmarted by their opponents, who appear determined to make amends for their miserable World Cup campaign.