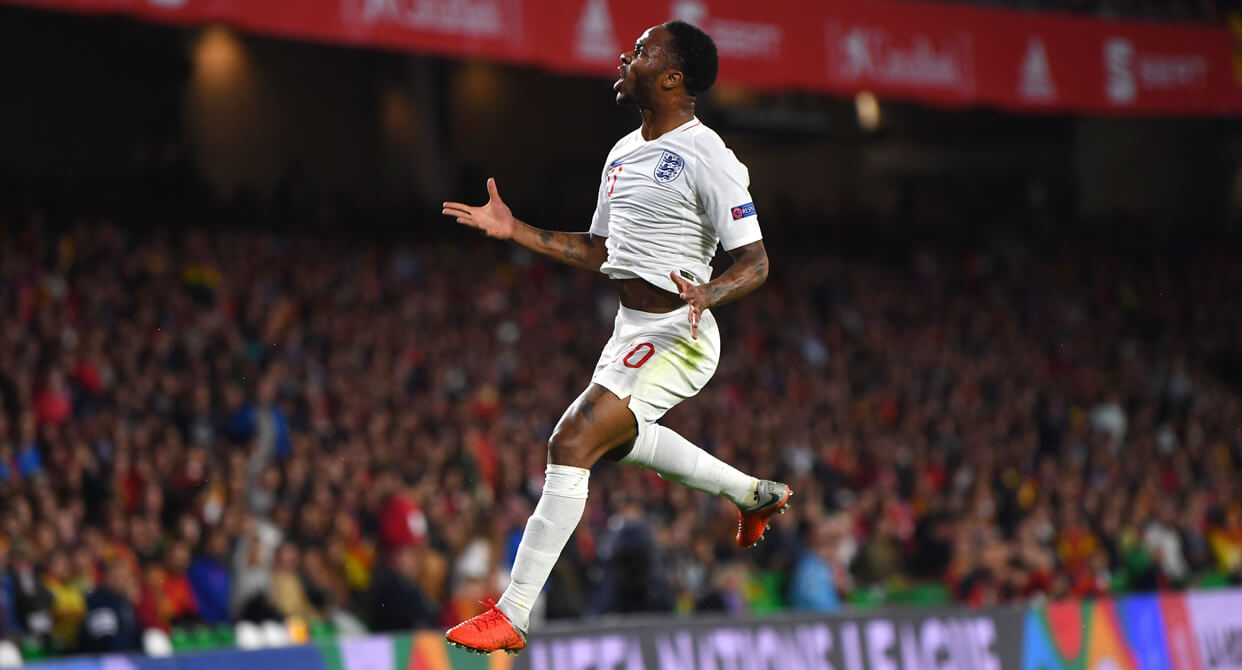 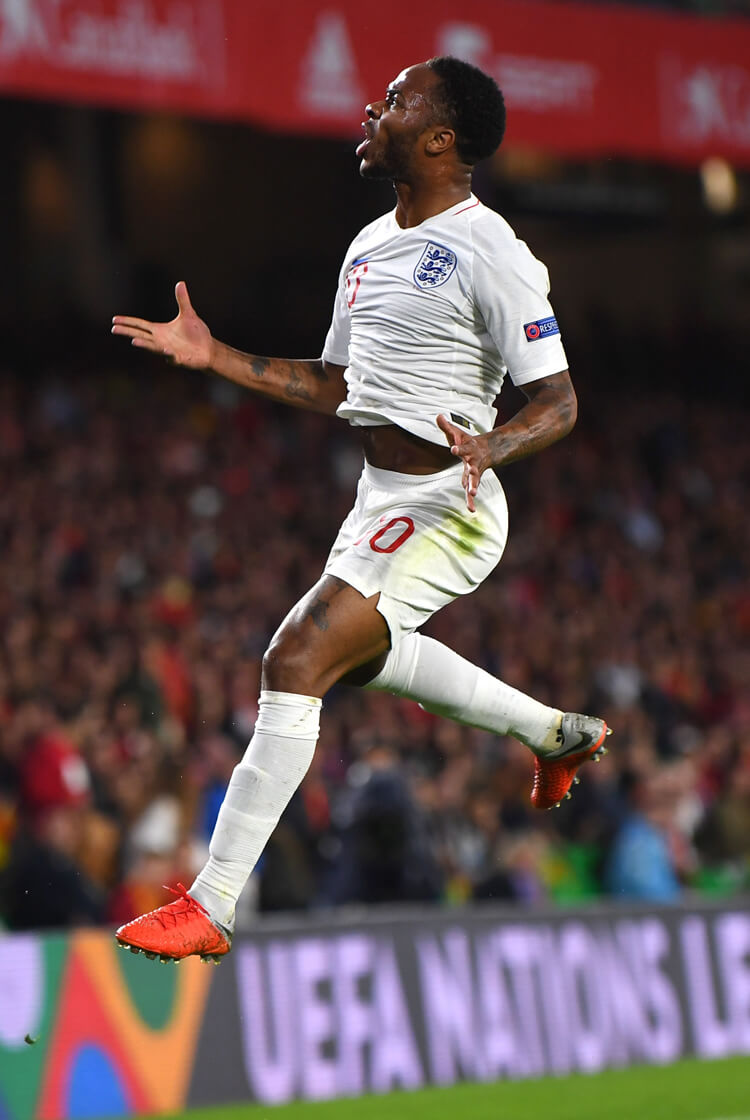 Gareth Southgate and his young England side inflicted a first competitive home defeat on Spain in 15 years, with a famous 3-2 win at the Seville home of Real Betis in their penultimate UEFA Nations League group fixture. The Three Lions delivered a devastating first-half display of counter-attacking football, with Jordan Pickford and Harry Kane combining twice in the space of 15 minutes to create goals for Raheem Sterling and Marcus Rashford. A second from Sterling, again assisted by Kane, looked to have killed the game off by half-time – and, despite an early second-half strike from in-form substitute Paco Alcacer, Spain were unable to launch a successful comeback. When home captain Sergio Ramos headed home in the seventh minute of added time, it was a case of too little too late for the hosts. 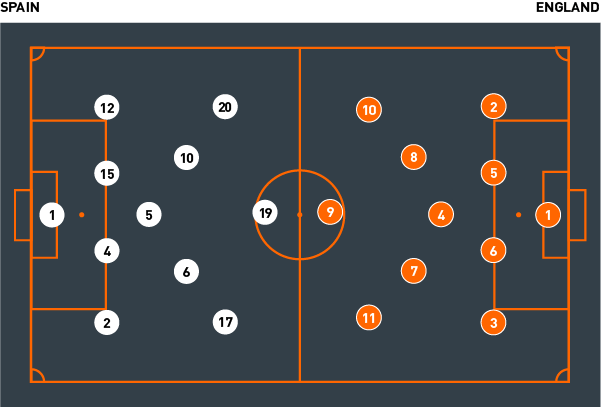 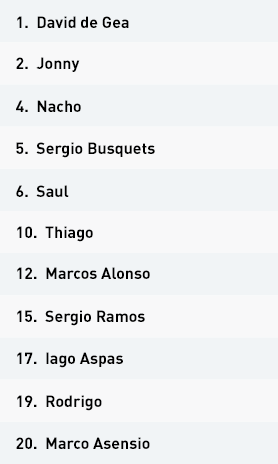 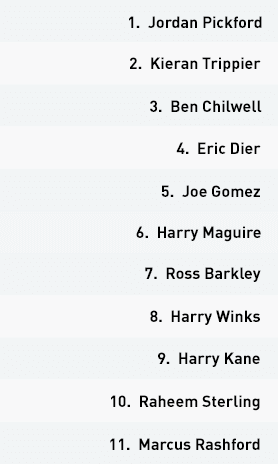 Luis Enrique made eight changes to the Spain side that had beaten Wales 4-1 in their last outing. David de Gea, captain Sergio Ramos and Saul were the only survivors, as Spain’s head coach returned to his first-choice XI in a bid to make it three wins from three in Group A4 of the inaugural UEFA Nations League.

Enrique set up in his preferred 4-3-3 formation, and his team dominated possession in the early stages. They looked to combine using the trio of full-back, central midfielder and wide attacker on both flanks, but it was down their right side that they first threatened. Wolves right-back Jonny got in behind after a third-man passing combination, but Kieran Trippier blocked his cross as an unmarked Marco Asensio waited in the area. From the resulting corner, Spain nearly went ahead, as Saul’s flicked header was nearly driven home by a sliding Marcos Alonso – although the Chelsea left-back’s effort was off target and rebounded off the back of goalkeeper Jordan Pickford.

Despite a strong start, Spain’s build-up play within their defensive third lacked quality. De Gea’s distribution was inconsistent, and Eric Dier’s thundering tackle on Ramos set the tone for a Spanish back line that looked uncomfortable against England’s early intensity.

Having fallen behind to England’s first real spell of possession, the hosts struggled to connect their defence with attack and get in behind England’s mid-block. Central striker Rodrigo’s dropping movements from high – something he does regularly for Valencia – could have helped Spain progress the ball more consistently between the lines. Instead, with both Saul and Thiago moving out to combine in wide areas, Spain lacked a second central link; lone pivot Sergio Busquets was unable to penetrate England’s central lane on his own.

Uncharacteristically, with the possible exception of Thiago, Spain struggled to smooth out possession in the middle third. This only increased England’s confidence on the counter-attack, and they carved the hosts open again for their second; Ramos and Nacho failed to win the loose ball from Pickford’s long kick forward, allowing Harry Kane to retain possession, look up and release Marcus Rashford, who finished well.

With England dropping into a congested mid-block, Spain were now forced to maintain possession in England’s half – but their passing lacked intensity and direction, as they switched from side to side without really looking like penetrating the visiting defence. Once the ball was worked around England’s central block, Spain’s wide players – Asensio and Iago Aspas – never looked comfortable in attacking their opposing full-back one on one. Possession was lost more often than not.

In the second half, Spain’s intensity with the ball increased significantly. Rodrigo took a much more active part in the build-up and Asensio moved more infield, often looking to stretch in behind England’s back line. The latter’s deflected effort, which whistled past the post, stemmed from the former’s well-timed link-up play between midfield and attack. The early introduction of a second forward, Paco Alcacer, for midfielder Saul also had an immediate impact for the hosts, as the new man was left entirely free at a corner to power a near-post header past the helpless Pickford.

England’s lack of combinations into midfield allowed the hosts to continue on the front foot after the goal, and Spain could have grabbed a second after Pickford dwelt in possession – on another day, his challenge on the predatory Rodrigo could have led to a penalty and a red card. But with both Alcacer and Rodrigo now looking to move in behind, Spain were able to push the England defence back and get Thiago and Asensio on the ball in the increasing gaps between the visitors’ lines. The eventual introduction of Alvaro Morata for Rodrigo now gave the hosts an aerial threat, too.

Spain did eventually grab a second, but Ramos’ well-timed diving header came in the seventh minute of injury time and was the final act of the game. Defeat was their first in a competitive home international since June 2003.

Gareth Southgate made three changes to the side that drew 0-0 in Croatia. The suspended pair of Jordan Henderson and John Stones were replaced by Harry Winks and Joe Gomez respectively, while Kieran Trippier was recalled in place of Kyle Walker at right-back in the head coach’s new 4-3-3 formation.

The visitors were immediately pegged back by the fluid Spanish passing midfield. Combinations in wide areas initially proved difficult to contain, as Spain penetrated England’s back line in the opening exchanges. England’s defensive structure switched between a 4-1-4-1 and an asymmetrical 4-4-2, with the latter used more often. Raheem Sterling would step higher to support Harry Kane’s central pressing, with Winks moving right to track the forward runs of Marcos Alonso. On England’s left, Ross Barkley would step out of central midfield to press, leaving Marcus Rashford to drop deep to cover the inside channel, and also help Ben Chilwell if needed.

In possession, England initially looked to test the Spanish back line with clipped balls into the space behind. Kieran Trippier would move high on the right, with Winks dropping into a false full-back position. Sterling could then step inside and look to combine with the likes of Kane and Barkley in central areas.

Despite looking sharp on the transition – a lightning counter from a Spain corner almost yielded their first chance of the game, but served notice of what was to come – England’s opening goal came after their first real prolonged spell with the ball. After patient passing around defence and midfield, the ball eventually found its way back to Pickford. Facing six Spain players in a high press, the goalkeeper bypassed them all with a pass into the dropping Kane. The captain played wide to Rashford, whose pinpoint through ball was expertly finished by Sterling.

England’s bravery in possession was personified by Pickford’s positioning, and his willingness to step forward with the ball – even against fast-pressing opponents. Southgate’s men would attract the press and then dramatically increase the tempo of their passing, splitting and bypassing the entire Spanish midfield unit. With a more delicate final ball, they might have created even more chances than they did in a superb first half of direct counter-attacking.

After scoring their second – Pickford and Kane again combining brilliantly before the latter played an exquisite ball in behind for Rashford to finish – England dropped into a congested mid-block, ready to absorb the seemingly inevitable Spanish pressure. But a period of aimless possession for the hosts, who were perhaps shocked at falling two behind, ensured that England had a relatively simple job to see out the first half. A second from Sterling, after England had regained the ball high and Barkley chipped a glorious ball into the relentless Kane, meant the visitors went into half-time three goals to the good.


In the second half, England gradually dropped into a low block deep in their own half. Both Rashford and Sterling showed glimpses during moments of transition, but the away side’s lack of possession and build from Pickford reduced the gaps their front line had to exploit on the break. Unlike in the first half, they also lacked control when building into midfield, often trying balls in behind Alonso for Trippier to run on to. However, the angles of these deliveries forward made it easy for Alonso to win the ball, and launch Spain on another attack.

With Paco Alcacer heading Spain back into the game and Jordan Pickford almost gifting the hosts a second, Rashford was forced to recover all the way back into England’s defensive unit – almost creating a temporary back five. This reduced even further England’s potential on the counter; for all Rashford’s pace, the distances were too great for him to have an impact from such a deep starting position.

The back line remained resolute, however, with Harry Maguire and Joe Gomez outstanding both in the air and in blocking crosses and shots on goal. Kyle Walker was introduced late on, giving England a more stable back five and allowing Rashford to once again take up more effective attacking positions on the break. Despite Spain’s last-ditch second goal, England came away with three goals from three attempts on target – and a famous away victory.