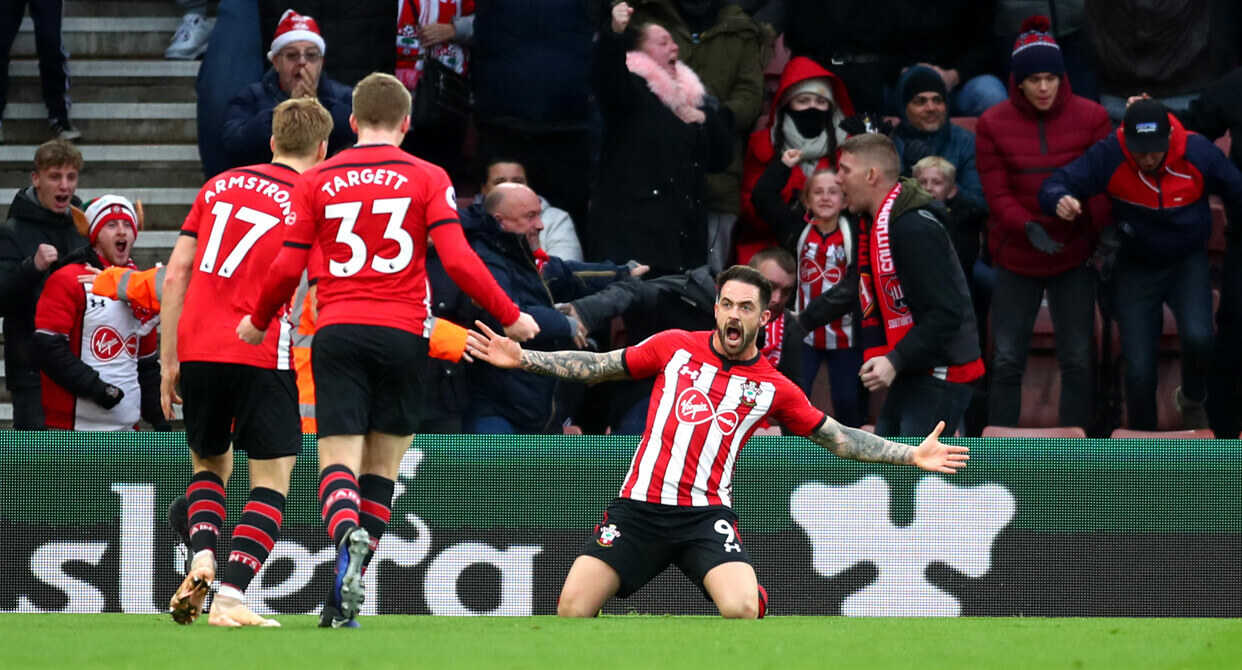 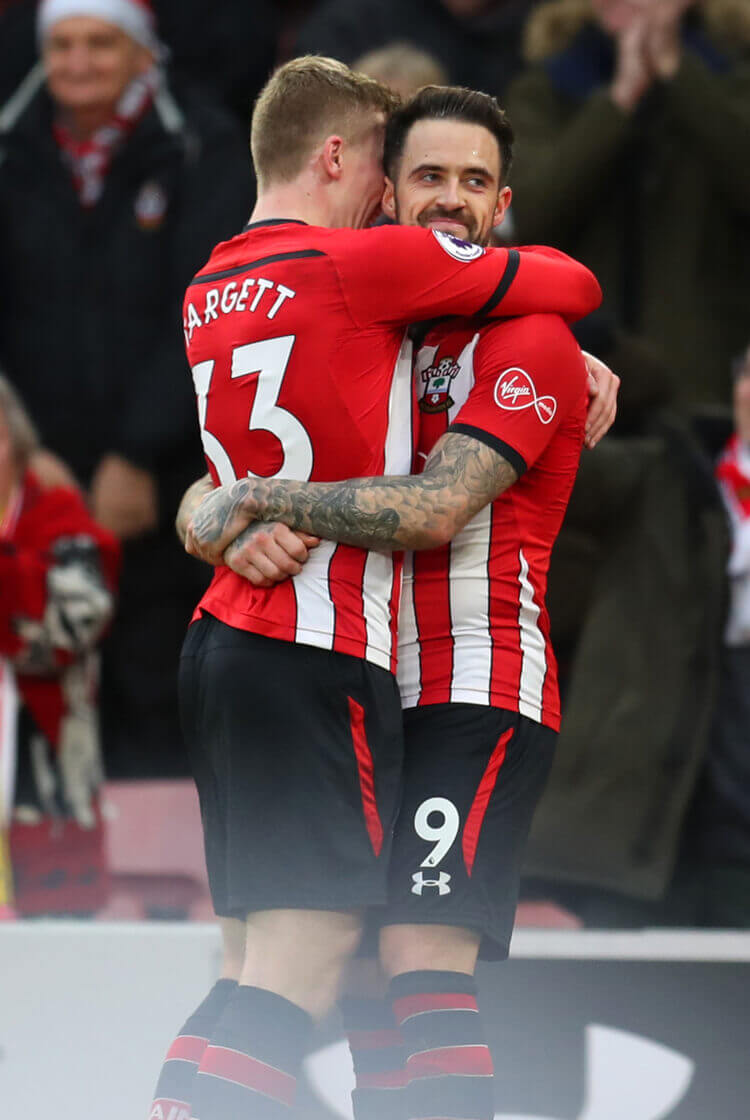 Ralph Hasenhuttl registered his first victory as Southampton manager at the expense of Unai Emery and Arsenal, who themselves were tasting defeat for the first time since the middle of August. Saints looked a different side from the outfit that had so struggled under Mark Hughes and took a well-earned lead into half-time, two superb Danny Ings headers coming either side of an equally impressive Henrikh Mkhitaryan effort for the visitors. The Armenian equalised for a second time shortly after the break, his shot deflecting in off Jannik Vestergaard, after which both teams pressed for the winner. It was the hosts who got it, however, with substitutes Shane Long and Charlie Austin combining for the latter to head in Saints’ winner and secure the three points that lifted them out of the bottom three. 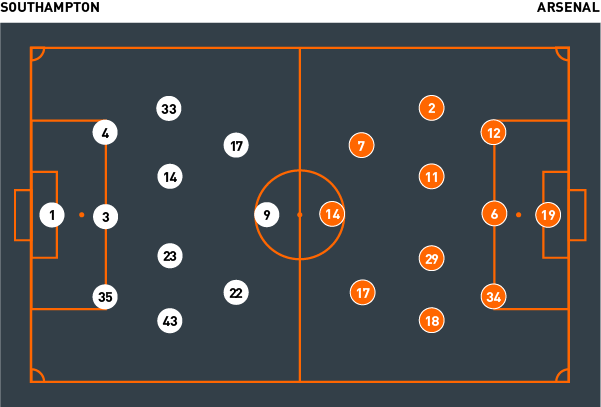 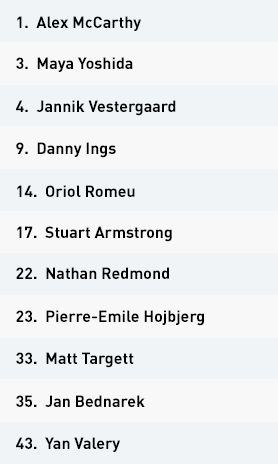 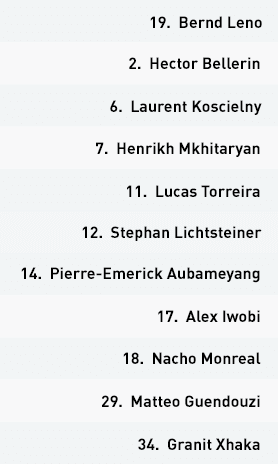 Ralph Hasenhuttl set his Southampton team up in a 3-4-3 formation, with Yan Valery, Oriol Romeu, Pierre-Emile Hojbjerg and Matt Targett forming a midfield line of four behind a front three of Stuart Armstrong, Nathan Redmond and Danny Ings.

In possession, Southampton looked to drop Redmond and/or Armstrong in between the lines to receive the ball from their defenders or midfielders. As the ball travelled in to their feet, this would trigger the forward runs of Targett or Valery, who looked to run ahead of the ball and receive out wide in a position to cross – exactly as seen when Targett centred for Ings to head the Saints ahead.

The relationship between Targett and Armstrong on the left was key to Southampton’s strategy in the first half, with regular rotations between the two; Armstrong always looked to draw Stephan Lichtsteiner or Hector Bellerin towards him in order to create the space for Targett to run into. Central midfielders Romeu and Hojbjerg looked to circulate possession and control the central areas, generally sitting deeper so as to protect against counter-attacks. As midfield was congested throughout the game, Southampton mainly looked to exploit the half-spaces and wide areas in their attacks, tending to shoot from outside the box or create chances from crosses rather than sending runners in behind early. No surprise, then, that all three of their goals on the day came from crosses.

Out of possession, Southampton used a variety of structures based on the state of the game and the Arsenal approach – this flexibility was crucial to Southampton’s success and one reason why the visitors only registered four shots on target.

The initial structure was 5-2-3, with Valery and Targett staying with their defensive line and the roles elsewhere within the shape clear. Armstrong and Redmond would press Arsenal’s outside centre-backs (Lichtsteiner and Granit Xhaka), with Romeu and Hojbjerg locking on to Matteo Guendouzi and Lucas Torreira in midfield. Valery and Targett would squeeze up to press Nacho Monreal and Bellerin regardless of how deep they dropped, but only if the ball was being played out to that side – this enabled the other wing-back to tuck in and maintain a back four.

The role of the centre-backs was key, due to the tendency of Alex Iwobi and Henrikh Mkhitaryan to drop and play between the lines. The Southampton defenders were happy to allow them to do this, but as soon as any Arsenal player looked likely to play into their feet, they would be on the front foot and ready to step out of their defensive line and close down. These decisions weren’t just limited to when Arsenal played out from the back, however. Even later in the game, when Southampton were much deeper, their centre-backs would be ready to step out to press an Arsenal attacker dropping between the lines.

As Arsenal changed to a 4-2-2-2 in the second half, Southampton adapted their press. They no longer needed three players to press the Arsenal centre-backs, but they did need an extra man in midfield – so Redmond and Ings would now press Xhaka and Laurent Koscielny, while Armstrong dropped into midfield with Romeu and Hojbjerg. The full-backs would still look to press Lichtsteiner, now operating at right-back, and Monreal, but if they dropped much further up the pitch then Armstrong or Hojbjerg would sometimes move across to close them down – this in turn allowed Targett and Valery to stay with their defensive line. The extra Arsenal attacker didn’t make a huge difference in terms of creating superiority for the visitors, because Southampton still had their back four or five intact – and the principles of stepping in to deal with dropping players and staying compact remained the same.

For the final 20 minutes, Southampton used a 5-4-1 formation in which substitute Charlie Austin led the line but didn’t press much. Instead, he would show the defenders one way, while fellow sub Shane Long and Armstrong played alongside Hojbjerg and Romeu in midfield.

Arsenal initially set up in a 3-4-2-1 formation, with Hector Bellerin, Lucas Torreira, Matteo Guendouzi and Nacho Monreal lining up as a midfield four behind Henrikh Mkhitaryan and Alex Iwobi, who in turn supported Pierre-Emerick Aubameyang in attack.

The visitors enjoyed the vast majority of possession (65 per cent), but had difficulty penetrating through Southampton’s out-of-possession structure and regularly ended up clipping balls forward that the Saints defence dealt with. Arsenal tried to find the feet of Mkhitaryan and Iwobi, but they could only ever really receive facing their own goal and would be crowded out upon receiving. On falling behind, they pushed Monreal and Bellerin much higher to almost play as wide forwards; this allowed Mkhitaryan and Iwobi to play inside with Aubameyang, while outside centre-backs Stephan Lichtsteiner and Granit Xhaka would push forward more when building the attack. It was during this period, with Monreal crossing for Mkhitaryan in the Southampton area, that the Gunners equalised.

In the second half, and behind once more, Arsenal switched to a 4-2-2-2 in which Iwobi and Mkhitaryan played behind a front two of Aubameyang and substitute Alexandre Lacazette, with Lichtsteiner and Monreal as full-backs either side of Laurent Koscielny and Xhaka.

They now tried to exploit the space behind Southampton wing-backs Valery and Targett, and would often use Lacazette or Aubameyang to move wide and occupy them to allow Monreal or Lichststeiner space to receive the ball. If the Southampton wing-back then pushed towards the Arsenal full-back on the ball, space would appear for the ball in behind – while movement from the forwards also created space inside either for their attacking midfielders or underlapping full-backs. Beyond this, however, there appeared to be a lack of variety to Arsenal’s attacking play, and they struggled to break an organised and combative Southampton defence down throughout the game.

Out of possession, Arsenal initially pressed in a 5-2-3 formation, with Iwobi and Mkhitaryan closing down the Saints’ outside centre-backs. Monreal and Bellerin would push up to close down Valery and Targett, while Guendouzi and Torreira would lock on to Hojbjerg and Romeu in midfield.

The difference between Arsenal’s pressing structure and Southampton’s, however, was that the Arsenal centre-backs weren’t comfortable in stepping out and closing down Redmond and Armstrong when they dropped in between the lines. This allowed Southampton to penetrate through the Arsenal midfield and find the feet of their attacking players, who could turn and run at the Arsenal defence. This happened a number of times in a first half during which the Gunners conceded twice from crosses in attacking areas – a weakness that reared its head again late on as they fell to their first defeat in four months.