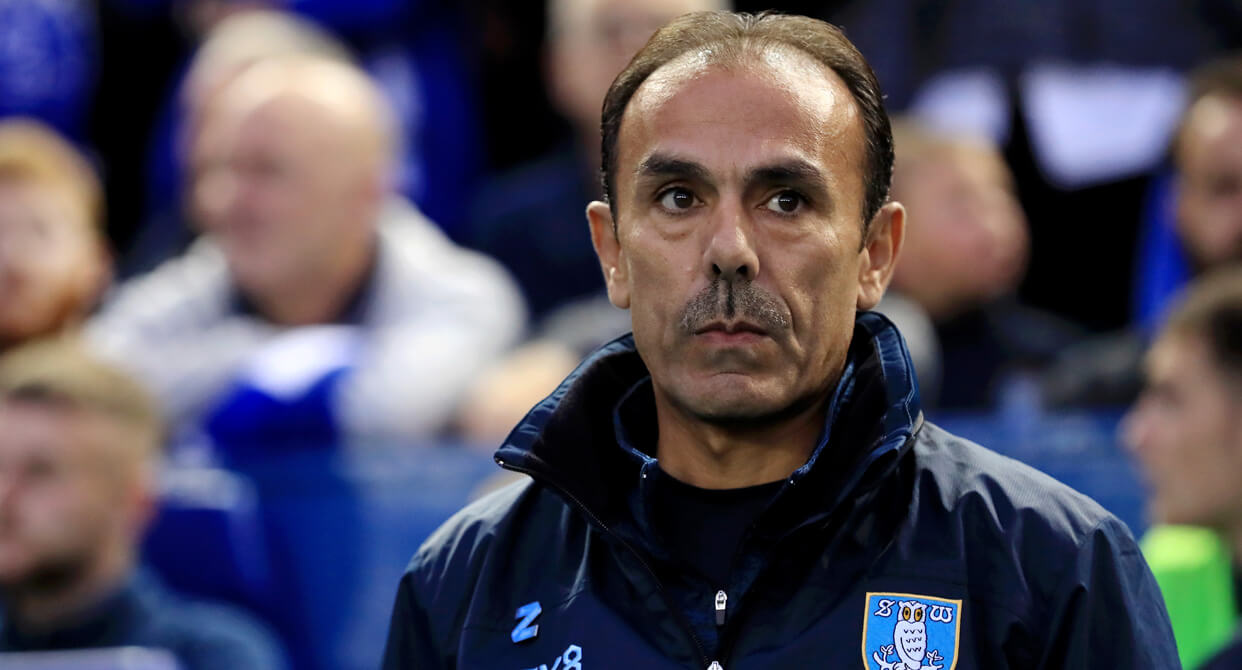 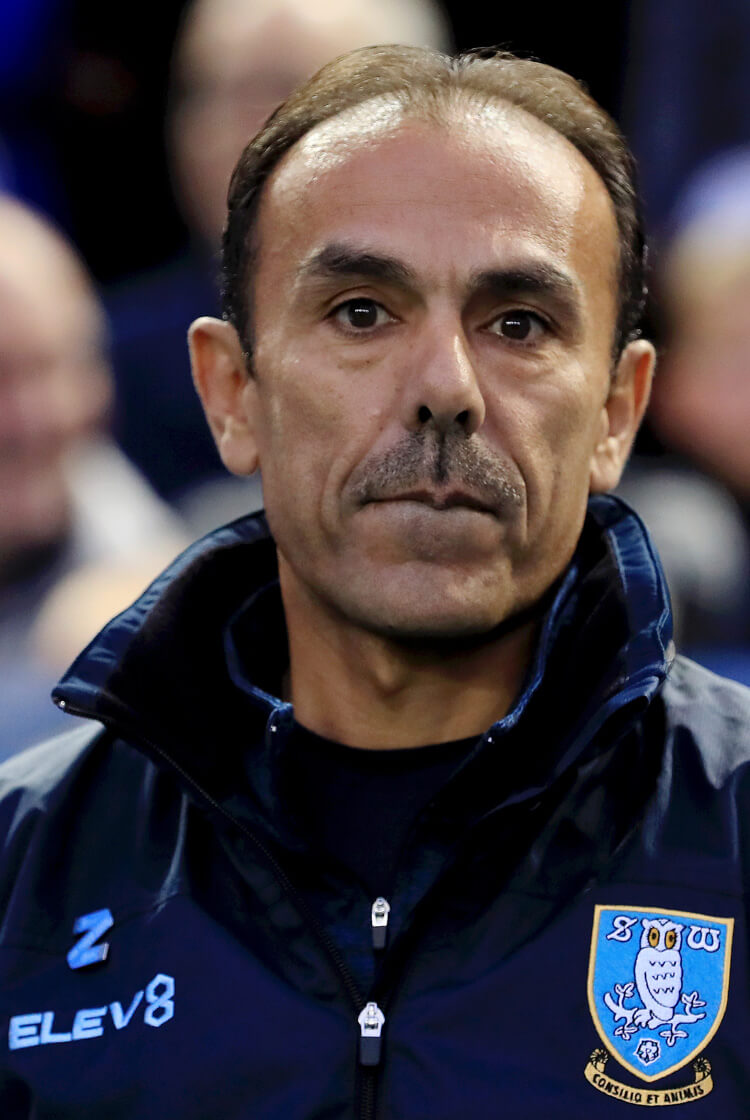 Sheffield Wednesday and Leeds took a point apiece from this entertaining Championship encounter at Hillsborough. Both sides hit the back of the net in impressive style, with Adam Reach and Mateusz Klich scoring either side of half-time. Reach broke the deadlock with a spectacular dipping volley from 30 yards in the 45th minute, before Klich responded after the break with a brilliant long-range strike of his own. Leeds have been in commanding form at the top of the table for much of the season, but came up against a stubborn Wednesday team yet to be beaten at home. The result enabled Darren Moore’s West Brom to take top spot in the league later in the weekend. 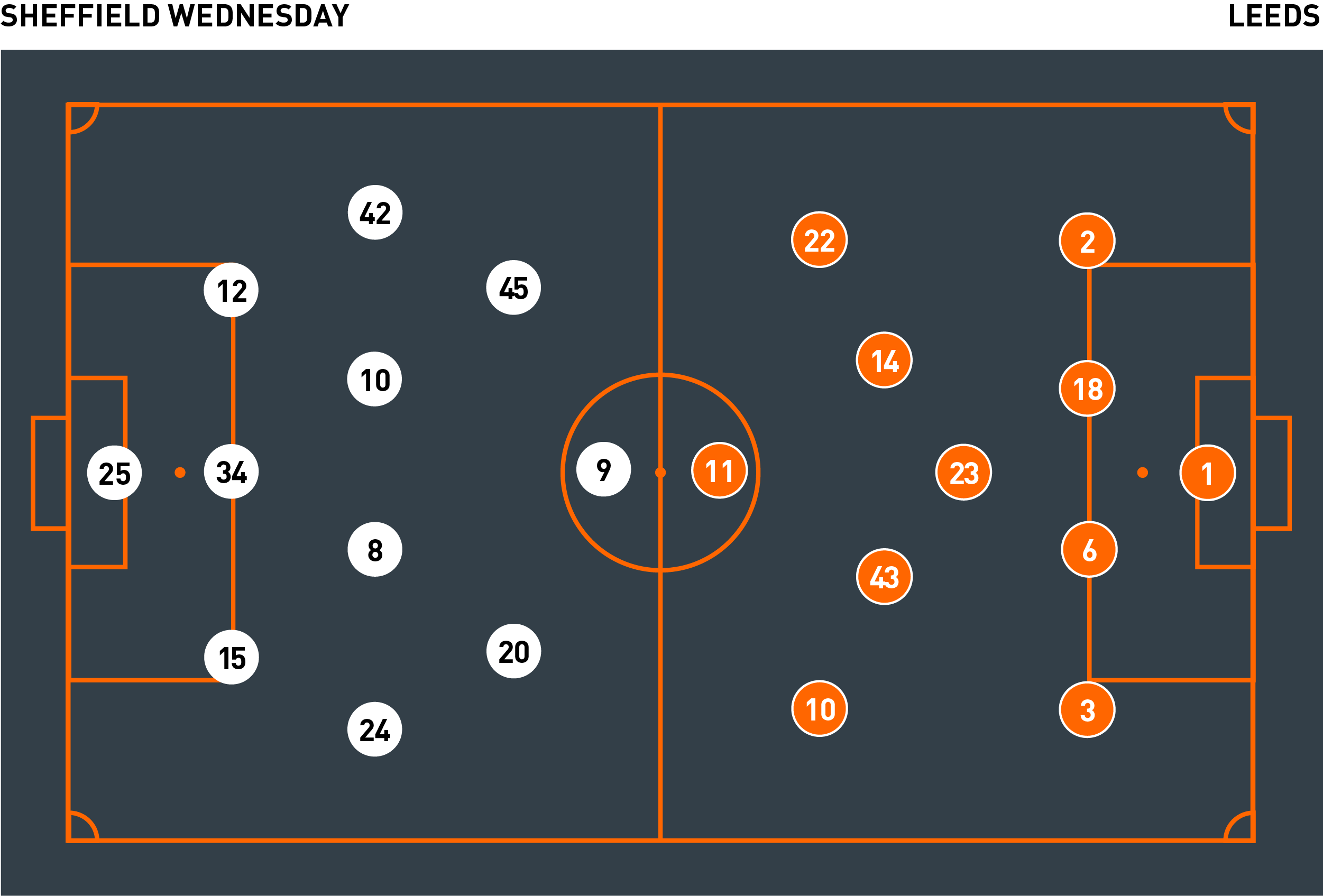 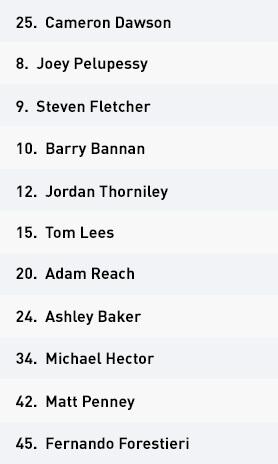 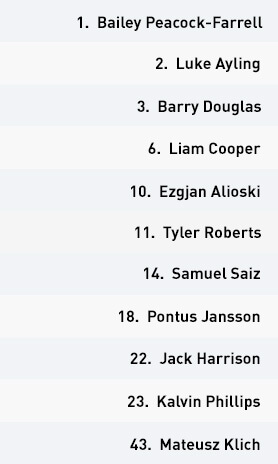 Sheffield Wednesday initially set up in a 3-4-3 in possession, with Matt Penney and Ashley Baker providing the width either side of Barry Bannan and Joey Pelupessy in midfield. Fernando Forestieri and Adam Reach supported Steven Fletcher in attack.

The Owls’ main strategy in attack was to send the ball directly to Fletcher in the air before feeding off the second ball, and the introduction of forwards Atdhe Nuhiu and Lucas Joao in the second half saw the hosts continue with this direct approach. Due to the reactive nature of their shape in response to the various threats posed by Leeds, a direct game was always likely. Given this approach involves fewer players, it bolstered the ease with which they could transition to their out-of-possession structure, thereby limiting the threat of counter-attacks.

The role of Michael Hector, positioned in the centre of the back three, was interesting in the early stages. The centre-back could regularly be seen stepping in to create an extra man in midfield in both offensive and defensive phases of the game. He was tasked with screening the ball into the striker’s feet, picking up any opponent who drifted into this area, and tracking runners in between the full-back and centre-back. Despite his stepping in to midfield being an effective idea out of possession, it was discarded as a tactic towards the latter stages of the first half.

Out of possession, the Owls demonstrated exceptional tactical flexibility. Their initial shape was a 5-4-1, with Penney and Baker tucking in with the back three to form the defensive line of five – but, due to the advanced roles of Leeds’ full-backs, Wednesday were reliant on wide forwards Reach and Forestieri to track their men. As Reach was significantly better at this than Forestieri, they struggled defensively down their left-hand side – and this resulted in a switch to a 4-4-2. Forestieri joined Fletcher on the top line to avoid more defensive damage, while Reach moved to the right side of midfield, Penney to the left and Baker (later Liam Palmer) dropped in to play at right-back. Hector and Tom Lees became the two centre-backs, with Jordan Thorniley sliding across to left-back.

Bannan and Pelupessy had to stay close to each other centrally to prevent the risk of central penetration, but this opened spaces either side of them, as Reach and Penney had to track their runners very deep – and Leeds eventually capitalised on this to score the equaliser in the second half. The Owls dealt with the fluidity of their opponents’ movement well for the most part of the game, however, and fleeted between tracking their runners all over the pitch and passing them on. They tended to stay with their runners, as they would generally have a one-man overload in their own defensive third. As Leeds ultimately operated with three central defenders and the Owls set up with two forwards, they could track their opponents wherever they moved, within reason, and still maintain an extra man for cover.

Leeds set up initially in a 4-3-3, with Kalvin Phillips as a pivot just behind Samuel Saiz and Mateusz Klich, with Ezgjan Alioski and Jack Harrison supporting Tyler Roberts in attack. Head coach Marcelo Bielsa changed his team to a 3-4-3 in the second half, however.

The visitors displayed great fluidity throughout the game, and generally looked to bring the ball out through the centre-backs. The distance between the centre-backs was quite small, with Pontus Jansson often positioned halfway across the pitch and Liam Cooper in more of a half-space on the left side. Phillips often dropped deeper to get on the ball and demonstrate his playmaking capability, while the full-backs would play like wingers – this then pushed Alioski and Harrison inside, where they were free to rotate with Roberts, Klich and Saiz. These movements and rotations were designed to pull Sheffield Wednesday’s individuals out of their defensive positions and create gaps through which to penetrate.

Leeds played lots of vertical passes to players dropping from higher lines, and would look to return possession to the original ball-carrier, who would then try to penetrate. This method brought little success, but they still looked to maintain possession and move the ball across the pitch, looking for gaps and players between the lines. The 13-pass sequence in the build-up to their equaliser, early in the second half, is a good example of this tactic.

In the second half, they responded to the Owls’ change in formation to a 4-4-2 by dropping Phillips into the back line to create a three-on-two with their opponents’ attackers in the build-up phase. In turn, this allowed full-backs Luke Ayling and Barry Douglas to push higher up the pitch and affect the hosts’ wide midfielders, creating more space either side of Bannan and Pelupessy.

Bielsa’s players spent little time in an organised structure out of possession for two reasons: the quality and intensity of their counter-press upon losing possession, and their opponents’ desire to play direct passes quickly. Out of possession, it was key that players further from the ball recovered at speed and that the ball-carrier was quickly surrounded at the turnover.

Another important component of Leeds’ work without the ball was the players’ desire to tackle back – when they were taken out of the game with a pass or dribble, they continued to work back to exert pressure from behind while the next player in line looked to press from the front. The switch to a back three gave Leeds a reasonable base with which to defend the counter-attack and increased the freedom of movement for the attacking players ahead. They still had to track back in transition, however, and they were each willing to do so.