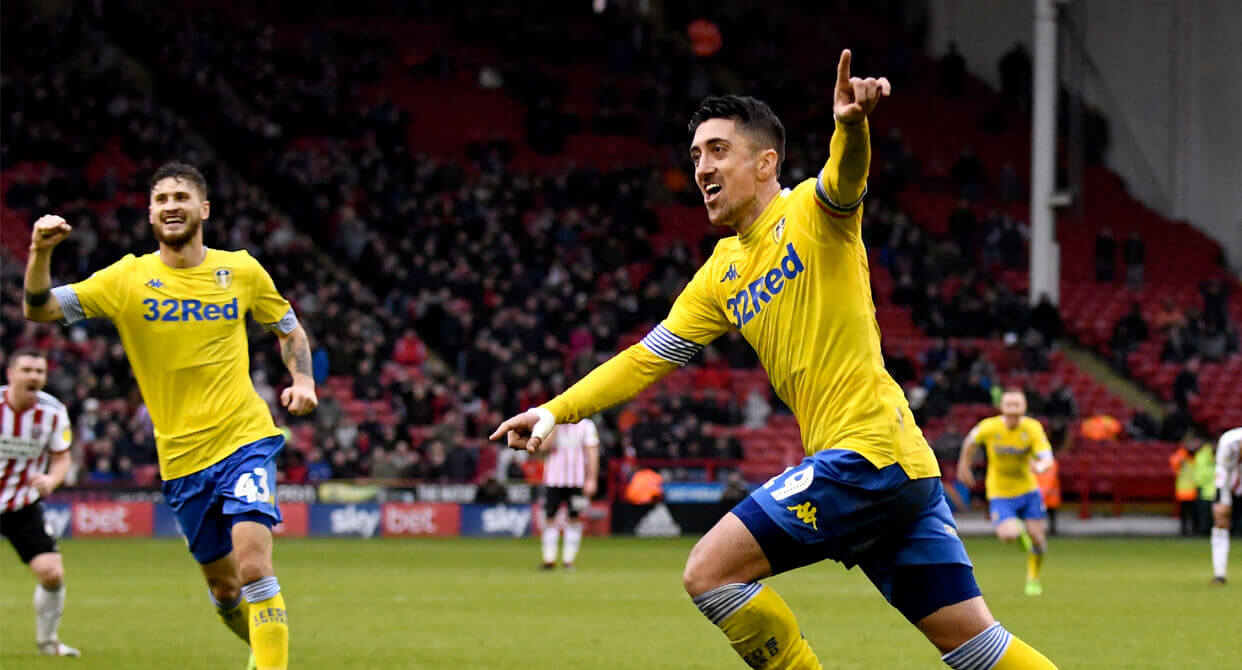 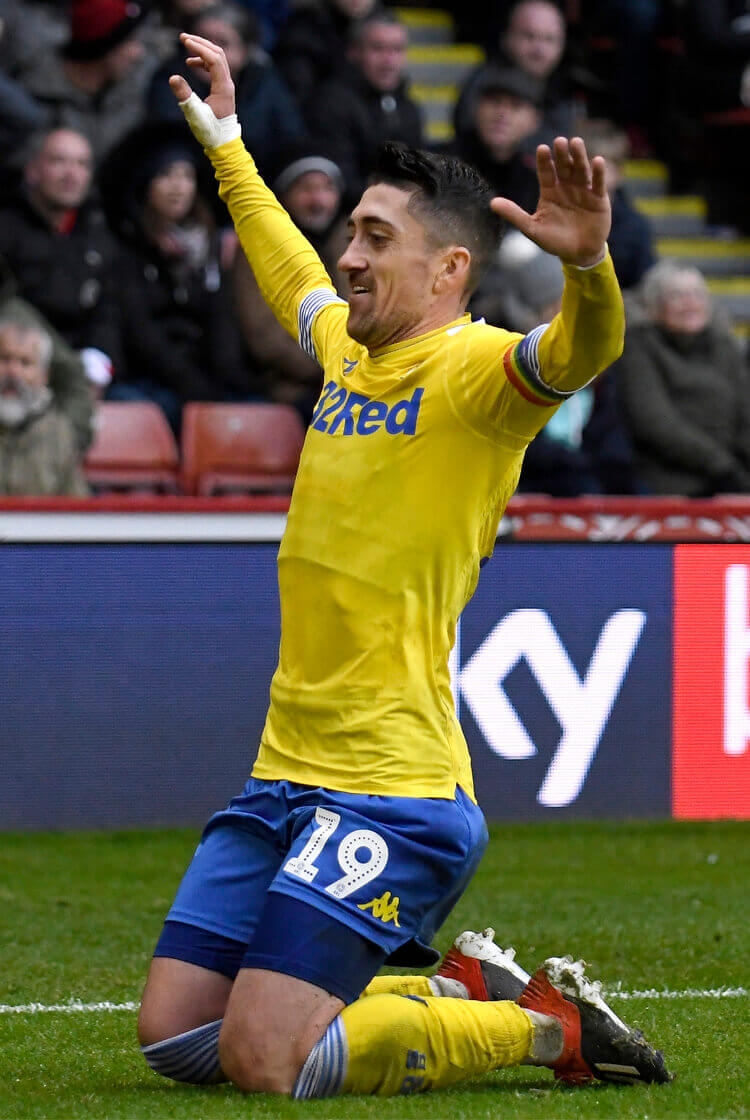 Pablo Hernandez capitalised on a terrible defensive mistake from Sheffield United to seal victory for Leeds in a competitive Yorkshire derby at Bramall Lane. An overhit backpass from John Egan 10 minutes from time forced Dean Henderson to race from his goal in an attempt to stop the ball going out for a corner, but the goalkeeper passed straight to Jack Clarke. The Leeds substitute then had the simple task of rolling across for Hernandez to tap into the empty net. The Blades had chances to take something from the game – substitute Conor Washington hit the bar with an overhead kick even after Hernandez’s goal – but it wasn’t their day. Norwich’s win over Rotherham later that evening saw Leeds knocked off the top of the Championship table, while Sheffield United drop to sixth. 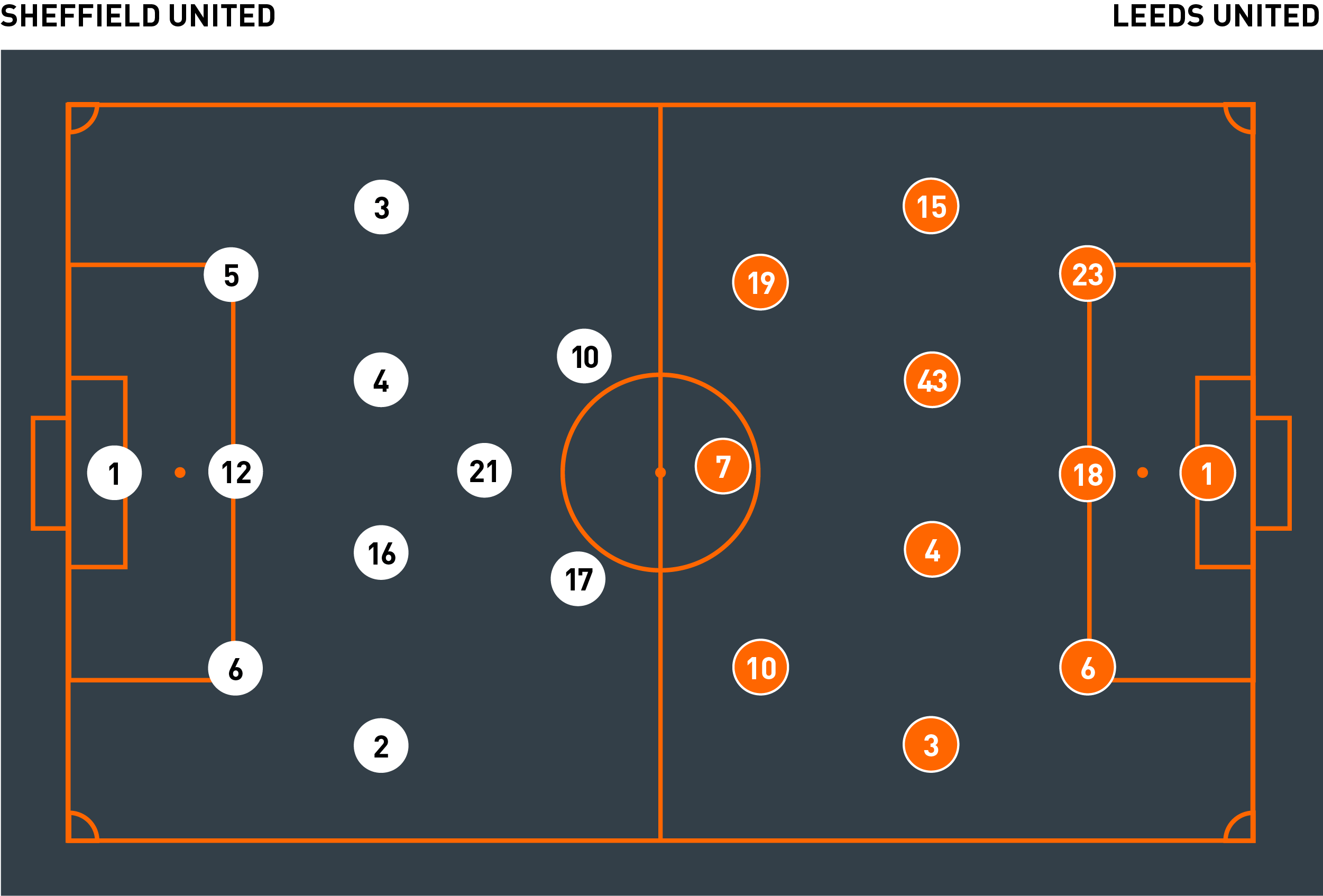 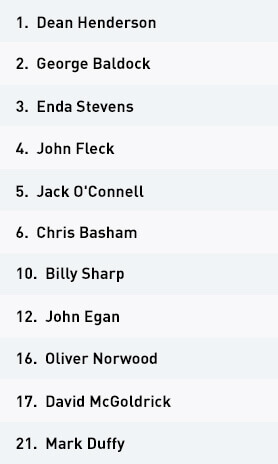 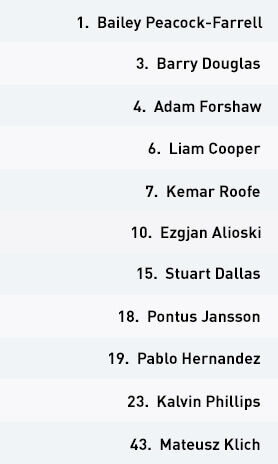 Sheffield United operated in a possession-based style with a very fluid system, perhaps best described as a 3-4-1-2. The system appeared to be of minimal importance, however, as several different positional structures were taken up during the course of the game. Crucially, the idea remained the same.

United took two approaches to bringing the ball out from the back. They would circulate possession between the three centre-backs before looking to play into Oliver Norwood or John Fleck beyond the first line – but their favoured strategy was using one of the centre-backs, usually Chris Basham, to drive out with the ball.

Basham demonstrated an attacking mindset throughout and would regularly run at the Leeds players before playing a short, diagonal pass into a teammate and running beyond to receive further up the pitch. Later in the game, Norwood could be seen operating in a false right-sided centre-back position – this allowed Basham to operate even further up the pitch, almost like a right-winger but still with sufficient cover behind him.

The key idea here was to commit players towards the ball and create free men around or beyond them to penetrate. David McGoldrick could often be seen dropping into midfield to create this extra man, and he was able to do this even more freely when Conor Washington was introduced in the second half. This meant two players – Washington and Billy Sharp – could now remain high up the pitch and a player could still drop in. The Blades were particularly keen on the up-back-through strategy – usually playing into McGoldrick’s feet before setting back and playing forwards or wide.

Out of possession, the hosts operated in a 5-2-3 structure when they pressed Leeds high, but a 5-3-2 structure when the ball was deeper. Enda Stevens and George Baldock would tuck in alongside Basham, John Egan and Jack O’Connell to form the defensive line of five.

When the ball went wide, they would press with two players. The wing-back and near-side central midfielder would move out to the player on the ball; the former would show them down the line, while the latter would prevent them from coming back inside.

When the visitors were playing out on one side, the wing-back on that side would push high to press his Leeds counterpart. Norwood and Fleck would play a little deeper, while the remaining four in the back five would slide across to create a more traditional back four.

They were forced to deal with several crosses towards the end of the game, as Leeds struggled to find a way through their block. Manager Chris Wilder will have been devastated, then, to concede from such a dreadful error in possession.

Leeds set up in a 3-4-3 formation with Kalvin Phillips, Pontus Jansson and Liam Cooper, who was replaced by Aapo Halme midway through the first half, as the back three. The midfield four consisted of Mateusz Klich, Stuart Dallas, Barry Douglas and Adam Forsaw, while the line was led by Kemar Roofe, Pablo Hernandez and Ezgjan Alioski.

Similarly to their opponents, Leeds performed with great fluidity in possession. Their in-possession structure rarely matched what was suggested on the teamsheet.

The front three were often seen roaming, with only Alioski on the left regularly remaining in his area. Roofe could be seen dropping in to allow Alioski and Hernandez to run beyond, or drifting wide to allow the midfielders to run centrally from deep positions. Hernandez often played centrally too, providing opportunities for his midfielders to rotate out to a wide position.

The idea was simple: to play and run forwards. They would regularly look to position players in between the lines and play penetrative passes to remove a unit from the Sheffield United block. This would be followed by forward runs beyond the ball, either from the player who played the original pass or those around the receiver.

Out of possession, Leeds utilised a few different strategies. When Sheffield United played out from the goalkeeper, they would try to match up three-on-three against their centre-backs by using Alioski, Roofe and Hernandez to close them down man-for-man. The central player in the three (nominally Roofe, but ever-changing) would also have the responsibility of trying to screen the pass into either Oliver Norwood or John Fleck – whoever had dropped at that time. This high pressure eventually resulted in their winning goal, scored by Hernandez.

If the Blades’ centre-backs had managed to gain solid possession of the ball, Leeds would operate in a man-oriented structure, whereby they would track and follow their direct opponent as far as possible. Although gaps could appear for the hosts to play through, no home player could receive the ball free in an advanced area. As the ball progressed further, however, Leeds would drop into a 5-2-3 out-of-possession shape. They worked hard to keep their opponents out, and rode their luck a little at times, but they will have been delighted to emerge from one of the toughest fixtures of their season with all three points.