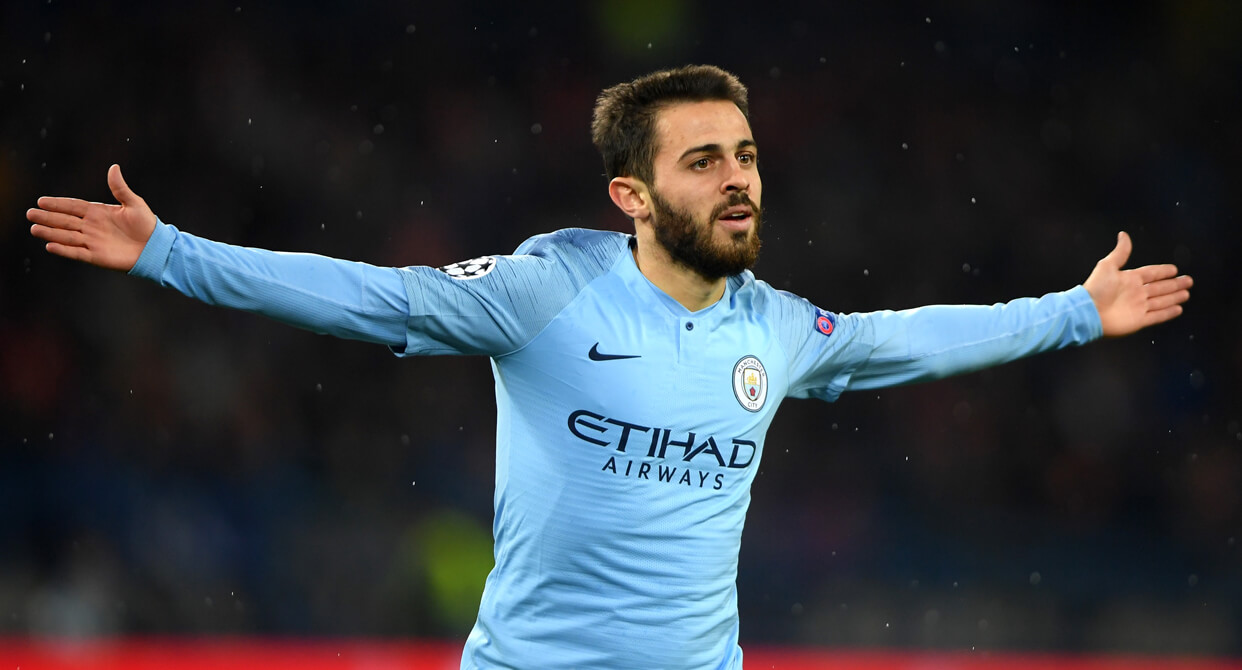 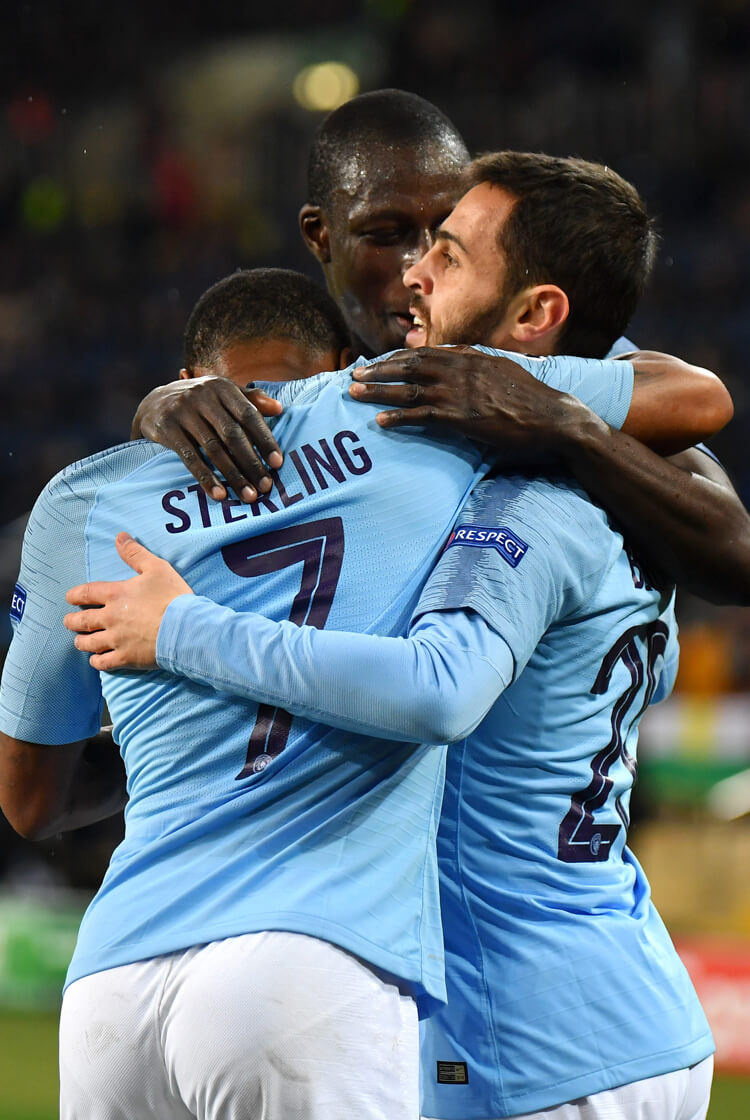 Manchester City moved ahead of Lyon to take over top spot in Champions League Group F with a resounding away victory over Shakhtar Donetsk – the first time an English side has beaten the Ukrainian outfit on home soil in Europe. David Silva volleyed in the opening goal at the half-hour mark before Aymeric Laporte doubled their lead five minutes later from a corner. City reduced the intensity of their play in the second half, but they remained a threat and substitute Bernardo Silva wrapped up the three points with an excellent finish 20 minutes from time. The victory also featured a return to action for Kevin De Bruyne, who has made a recovery from a knee injury sustained in August. They'll be hoping their unbeaten run extends to eight games, as they next travel to Wembley in a potentially tricky fixture against Tottenham in the Premier League. 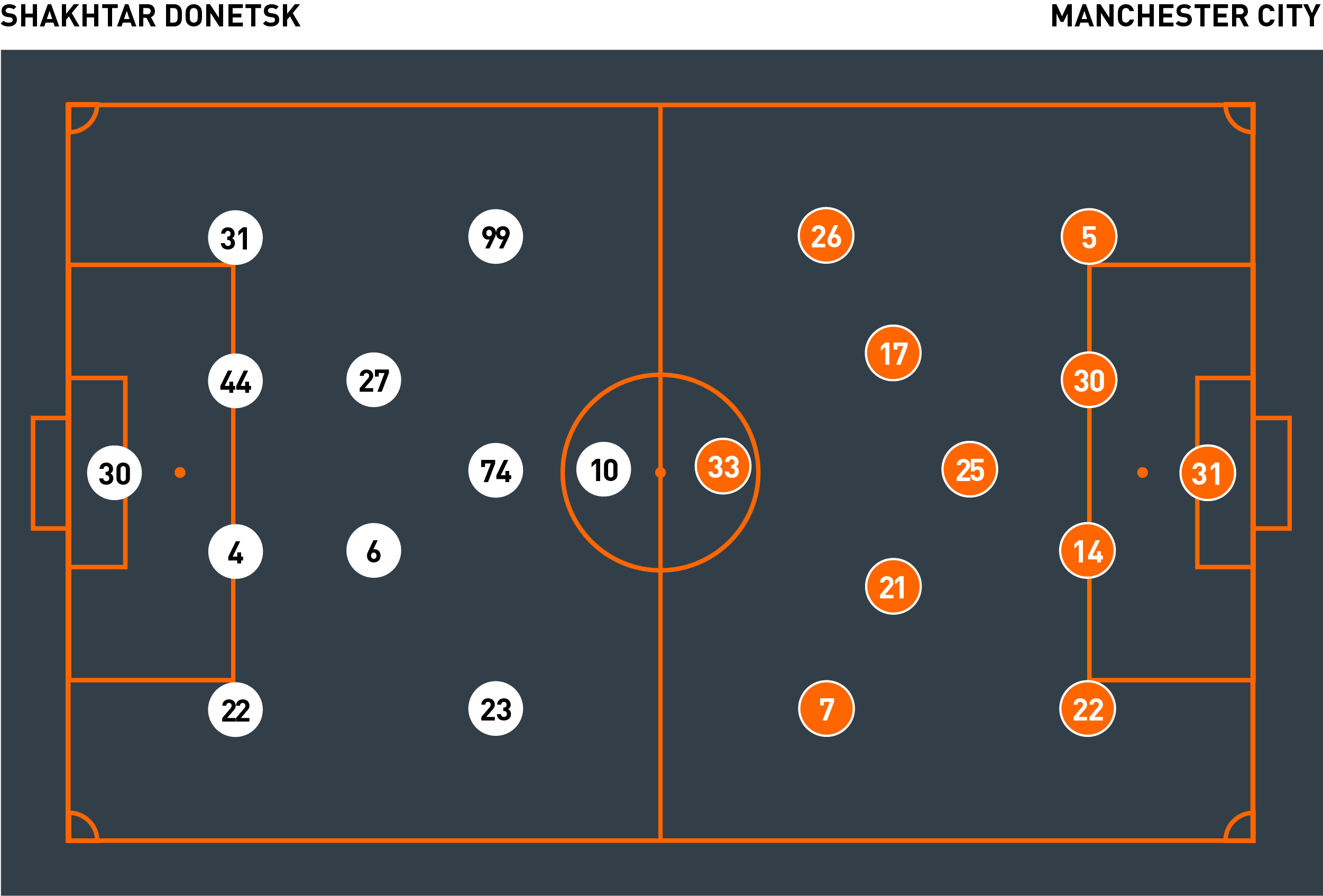 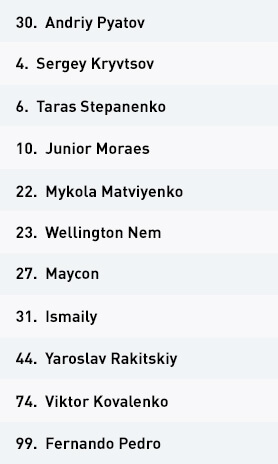 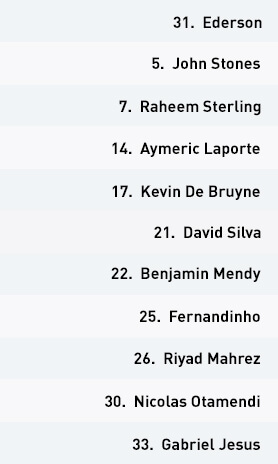 Shakhtar Donetsk maintained their 4-2-3-1 formation for the visit of Manchester City, but head coach Paulo Fonseca opted to make five changes to his side. Mykola Matviyenko and Yaroslav Rakitskiy came into the back line, while Taras Stepanenko was introduced in defensive midfield. The two final changes saw Viktor Kovalenko and Fernando Pedro come into the attack.

Shakhtar saw very little of the ball against a dominant away side in the opening exchanges. In their first moment of possession, both central defenders expanded, allowing the double pivot of Stepanenko and Maycon to drop deeper in the central lane. This in turn enabled both full-backs to push higher, moving in line with Kovalenko in the central number 10 position. Despite this bold and expansive opening piece of play, their opponents’ high line and intense pressing ensured possession remained limited.

The hosts’ ventures into the final third only came from mistakes made by City throughout the first half. Shakhtar's best chance to regain possession came via passes back into the central lane from the wide areas, as their mid-block lacked any form of intensity with regards to consistent pressure on the ball. With Fernandinho dropping deeper as the game progressed, they were afforded more central space to drive forward after a regain, but their quality when attacking one-on-one was of a low standard.

They continued to expand when goalkeeper Andriy Pyatov possessed the ball, but despite initially distributing to a man in space, City’s ability to regain possession by winning individual duels created additional chances for the visitors. While desperate long balls forward were then often won by Junior Moraes at the first contact, the lone striker lacked supporting runners to gain control of the second ball.

After conceding in the 30th minute, Shakhtar eventually had a promising spell of possession in which the full-backs moved very high – well ahead of their defensive midfield pairing. Wingers Wellington Nem and Fernando also moved higher, forming an extremely narrow front three with Moraes. Now, they could receive through-balls in behind the visitors’ defence with runs made blindside of their full-back markers. This approach resulted in a few corners being won, but they were still struggling to threaten and soon went two goals down following poor marking from a corner conceded themselves.

Shakhtar’s play in the second half was much more promising. As City set up in a more reserved mid-block around the halfway line, the midfield could get on the ball more. With John Stones in an unnatural right-back role, the hosts naturally targeted this side to attack. Fernando continued with his inside movements, allowing left-back Ismaily to step forward, with and without the ball. Fernando’s runs inside were performed slightly later compared to the first half now that the front three had become less compact as their possession increased.

Long balls in behind for both full-backs to run on to proved a direct and effective method to penetrate into the final third. The hosts made use of Kovalenko’s positioning in between the lines to effectively switch the play to the opposite full-back or to combine centrally with Wellington and Fernando. But despite finding an inroad into their opponents’ half, Ederson stood firm to any effort on goal.

Shakhtar converted into a 4-4-2 structure when defending, with Kovalenko moving from his number 10 role into a second supporting striker. They then formed a compact mid-block, focused on reducing the central space between their midfield and defensive units. This, however, naturally afforded City spaces in the wide areas, and the visitors progressed well down the right side.

Kevin De Bruyne capitalised on this most, increasingly moving across to Shakhtar’s left side. As a result, the hosts’ back-line gradually shifted across to cover the threat. This sliding across from right to left wasn’t always well co-ordinated  though, and central gaps started to appear. David Silva and Raheem Sterling eventually started to exploit these gaps through forward running, and City's lead at half-time was deserved.

Shakhtar’s 4-4-2 structure was reasonably organised throughout the match and they worked hard to protect various key spaces. But they were let down by a lack of skill under pressure and an inability to beat their man one-on-one. Once the visitors grabbed a third goal following a rapid counter-attack from deep, the game was well and truly over.

Head coach Pep Guardiola maintained the 4-3-3 structure that had demolished Burnley in the Premier League, but four changes were made to his Manchester City team. Nicolas Otamendi came back into central defence, while Kevin De Bruyne returned from injury for his first appearance in the Champions League this season. Sergio Aguero and Leroy Sane dropped to the bench, with Raheem Sterling and Gabriel Jesus selected in attack.

City dominated the early possession and prioritised building their attacks using the width provided by Sterling and Riyad Mahrez – both wingers remained near the touchlines throughout to stretch Shakhtar’s back line. During the early parts of their build, either John Stones or Benjamin Mendy would step inside to join Fernandinho as a double pivot. Even if Fernandinho dropped back to form a central back three, the inside movements from the full-backs opened a quicker passing lane out to the wingers. The positioning of David Silva and De Bruyne created third-man combinations with the receiving winger, as the corresponding full-back then ran in behind to provide crosses.

David Silva dropped deeper into central midfield as the first half progressed, while Fernandinho took on a more consistent role in the back line. This movement increased the visitors’ central combinations, as David Silva orchestrated the majority of the play forward. With the Spaniard luring away Shakhtar's right-sided defensive midfielder, Sterling in particular had more space to attack his full-back one-on-one and provide Jesus with crosses from the left.

The visitors deservedly took the lead at the half-hour mark following a regain from their high-pressing midfield. The ball eventually fell for David Silva via a low cross from Mendy, and the Spaniard volleyed low under the Shakhtar goalkeeper. The hosts responded well to conceding, gaining some valuable control of possession, but City grabbed a demoralising second five minutes later. De Bruyne’s corner found Aymeric Laporte free inside the penalty area after Stones’ clever blocking had created just enough space for his defensive partner to head home.

City reverted into a much deeper block in the second half, which naturally reduced their time in possession. After a spell pressing high to regain the ball, they remained in a compact mid-block for the remainder of the contest, and now looked to attack on the transition. The introduction of Bernardo Silva added pace and skill on the ball, from which the visitors duly profited. After regaining deep within their own half, the Portugal international and Mahrez drove forward down their right side. Bernardo cut back inside before unleashing a low drive that bounced in off the inside of the post to all but confirm a valuable away win in Group F.

Although Shakhtar had easy access into their central number 10 Viktor Kovalenko during moments of transition, City’s quick-recovering midfield ensured that his link-up play with supporting runners often resulted in loss of possession. David Silva and De Bruyne might have been positioned very high as the two attacking central midfielders, but their recoveries back to the ball were exemplary, forcing the hosts to resort to hopeful long balls forward to isolated striker Junior Moraes.

City's ability to control the game largely stemmed from their ability to regain possession and an aggressiveness during individual duels. Winning the majority of battles within midfield not only halted Shakhtar's progression but also increased the number of attacks City could create – particularly from high-pressing actions.

In the rare moments they were forced to drop into a compact shape, City utilised a 4-1-4-1 structure, with David Silva or De Bruyne stepping out of midfield to aggressively press Shakhtar’s double pivot and help Jesus block central access. They successfully funnelled the ball into the wide areas, where the hosts lacked quality on the ball from the full-backs especially.

City's high pressing continued in the opening spell of the second half, as their opponents failed to alter their now predictable build-up. Shakhtar didn’t alter their patterns of play in the slightest, making it easier for City to consistently press to good effect. They naturally reduced the intensity of this in the second half, with it seeming as though Guardiola used the opportunity to test out a more patient and compact defensive style without the ball. As a result, Shakhtar had their best spell in the game, but still failed to really test Ederson.