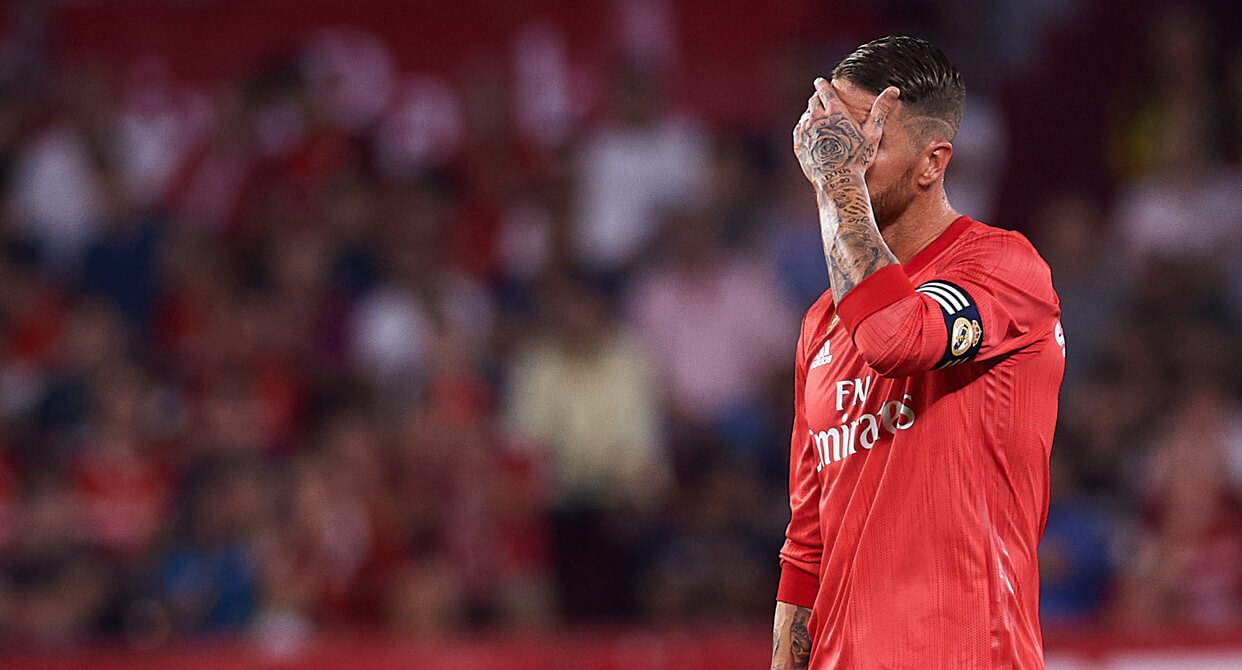 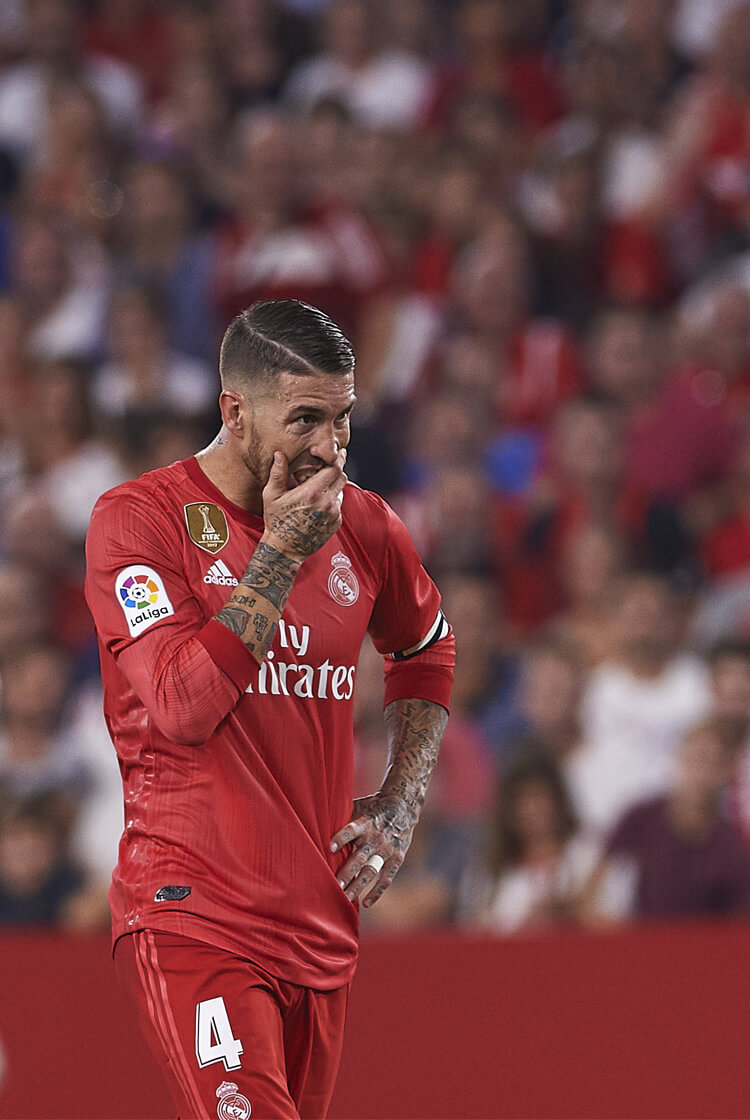 Sevilla eased to a resounding victory over Real Madrid in a thrilling La Liga encounter at the Ramon Sanchez-Pizjuan. The hosts had beaten Los Blancos in their previous domestic meeting in May, but were even more convincing this time around. Andre Silva gave his side a two-goal lead with little over 20 minutes played, with former Manchester City winger Jesus Navas playing a part in both finishes. Wissam Ben Yedder then confirmed the three points with a volley just before half-time. It was a first league defeat for Real under Julen Lopetegui, but Barcelona’s loss to Leganes on the same day meant there were no changes at the top of the table. 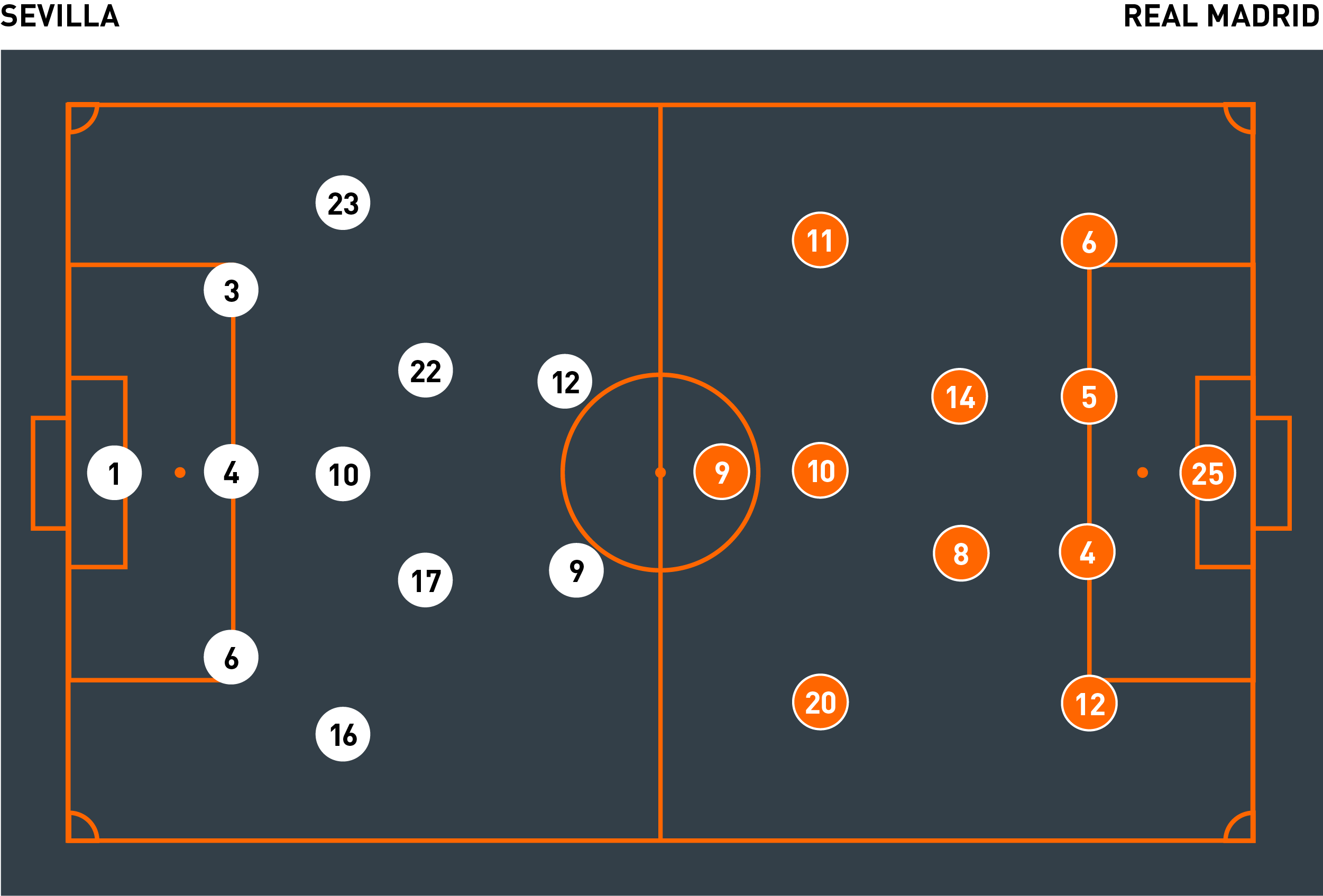 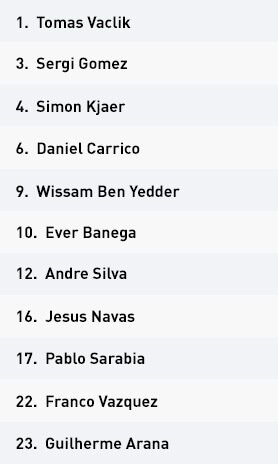 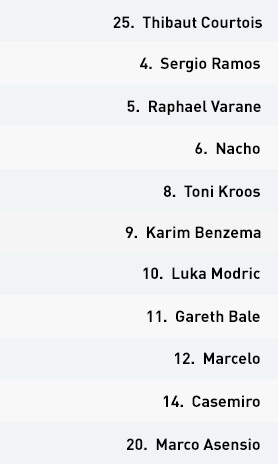 Sevilla set up in a 3-5-2 in possession, with Jesus Navas and Guilherme Arana providing the width either side of the three-man central midfield of Pablo Sarabia, Ever Banega and Franco Vazquez. Wissam Ben Yedder and Andre Silva formed the attack.

In possession, the hosts were patient during the build-up phases, with the simple idea of trying to find a free man and progress the attack. As the central defender looked to commit a player towards him, the free man would ordinarily end up being the full-back – but it was difficult to find consistency with this against the pressing of Real Madrid. They had to change their approach to switching the ball between their centre-backs, which forced Luka Modric to cover more ground and opened up more spaces. One of the two strikers would also drop deeper to create a free man between the lines. With an overload of three against two already present in central areas, the additional player caused problems for Real throughout.

They were at their most damaging on the break, though, with their attackers and midfielders extremely quick at identifying when they could launch a counter-attack. It was no surprise that this approach should lead to two of their three goals on the night.

They operated in a 5-3-2 out of possession, switching between a low and mid-block. Navas and Guilherme Arana dropped in with Simon Kjaer, Daniel Carrico and Sergi Gomez to make a defensive line of five that remained compact and would not be pulled out of position. They executed their game plan to perfection, denying Real the spaces that could potentially hurt them during their attacking build.

Pablo Machin’s men were happy to let Real have the ball in front of them, limiting the visitors to shots from distance and hopeful passes into the limited space in behind the defensive line. Ben Yedder and Silva were crucial in the defensive phase, as the pair constantly worked back to remain between the ball and the goal. This provided more security for the midfield and defensive lines behind them, allowing them to operate with a distance of approximately 25 yards from front to back – this made it exceptionally difficult for Real to find any gaps for penetration. The midfield three performed a superb job of covering the ground, too. Against a 5-3-2 system, the space is usually found on either side of the midfield, in the half-spaces and wide areas – but the Sevilla trio were adept at dealing with any Real switch of play.

While they faced a below-par Real, Sevilla were fully deserving of the victory. They beat Los Blancos in their last La Liga meeting in May, and could have scored even more this time around, such was their consistent threat on the break. The stats might suggest the visitors weren’t short of openings on goal, but the reality is that they were well beaten.

Real Madrid set up in a 4-2-3-1 in possession, with Casemiro and Toni Kroos in midfield. Luka Modric, Marco Asensio and Gareth Bale supported centre forward Karim Benzema in attack.

Los Blancos had to be very patient in possession, circulating the ball in front of the Sevilla block and looking for a way through. A lack of movement between the lines and ahead of play meant that their opponents were largely untroubled by both this circulation and the longer passes in behind the defence that they were eventually forced into.

Along with centre-backs Sergio Ramos and Raphael Varane, as well as full-backs Nacho and Marcelo offering second-line passing options out wide, Kroos and Casemiro would often sit in front of the entire Sevilla team. Modric, then, was left as the only player operating between the lines, but he was mostly outnumbered by the visitors’ midfield three. One or two of the front three would drop in to help, but Sevilla were more than comfortable in dealing with this.

Real switched to a back three in the second half, to try and match their opponents’ formation – Casemiro dropped in between Ramos and Varane, allowing Marcelo and Nacho (later Lucas Vazquez) to push up higher to provide the width, which in turn pushed Bale and Asensio inside to help Modric and enabled Kroos to position himself between the lines. But still they struggled to create; despite having 18 shots on goal, only four of these were on target, with many of the others hopeful attempts from distance rather than efforts of any real quality.

They looked to press in a 4-2-3-1, with Benzema leading the line and pressing central defender Simon Kjaer. Modric had more work to do as the number 10 in this system, as he was tasked with closing down both outside centre-backs when they received possession – and this only became more difficult when they switched the ball between them at speed. Asensio and Bale would then look to press the wing-backs, should the ball go out wide – this reduced the distance Marcelo and Nacho would need to close down, and helped to prevent two-against-two situations for Ramos and Varane against Wissam Ben Yedder and Andre Silva.

They ran into problems when Sevilla broke the press, as a numerical disadvantage in the middle had the knock-on effect of committing new players towards the ball and opening new spaces in behind. They struggled defensively against their opponents’ counter-attacks for one simple reason: they did not have enough cover. They similarly found it difficult when one of the two Sevilla forwards would drop in – neither Ramos nor Varane were willing to leave their defensive line to track, and the forward would be on the blind side of Casemiro and Kroos, who had three central midfielders in front of them to deal with anyway.

The switch to a back three in the second half allowed Real to deal more effectively with the counter-attacking threat of the visitors. It offered greater numbers in defence and allowed one of Casemiro, Ramos or Varane to drop in with Ben Yedder or Silva, should they wish to drop, while still providing sufficient cover. This structural change, however, couldn’t change the scoreline. Real were punished by ruthless opposition for a lacklustre performance. They were fortunate to have won the three points in their previous La Liga fixture – a narrow win over Espanyol – and can have few complaints over leaving Seville empty-handed.