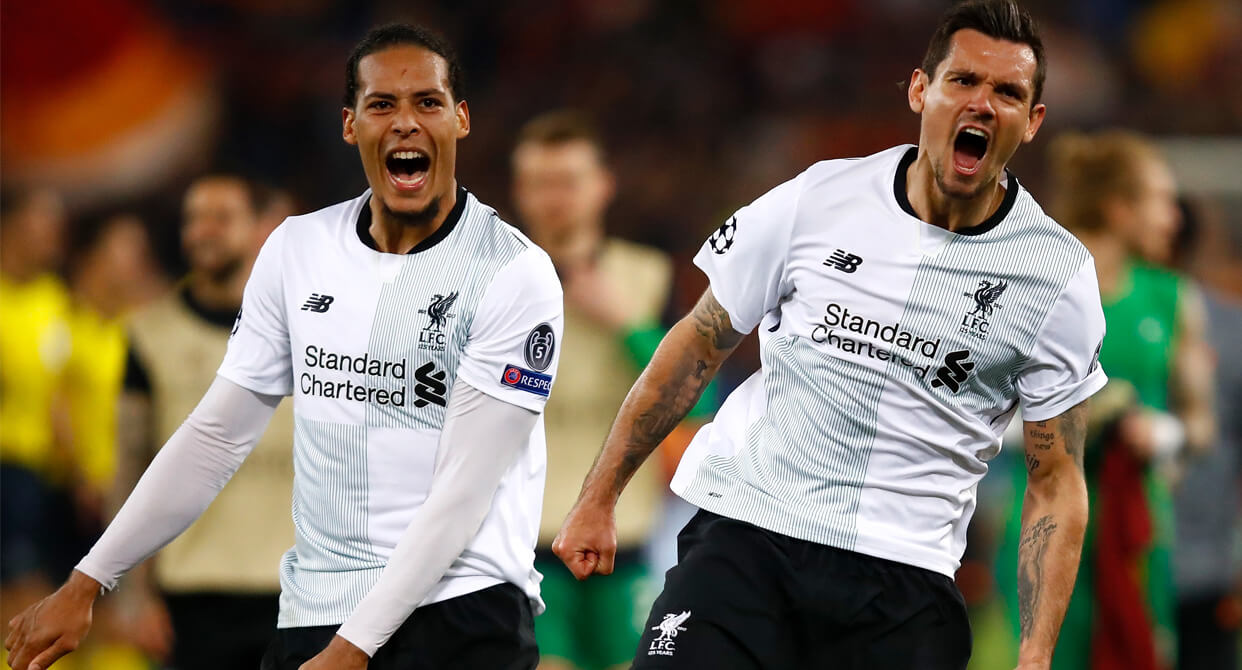 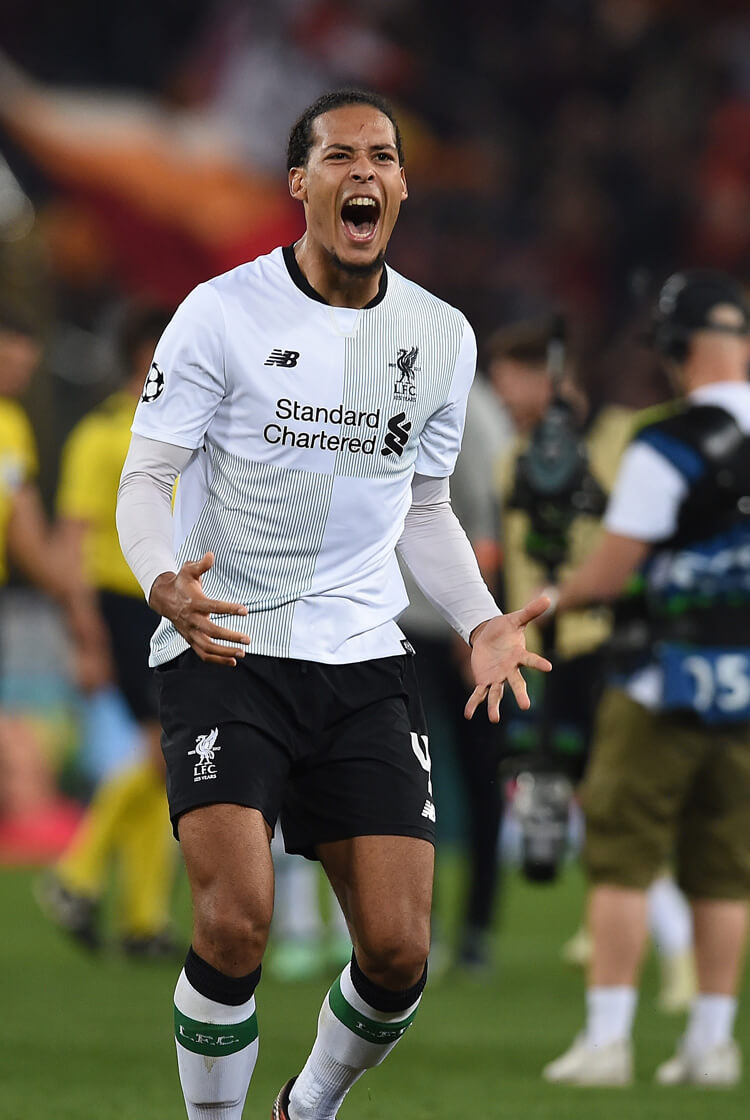 Liverpool suffered their first defeat in this season's Champions League in the Eternal City, but it was a hollow victory for hosts Roma as Jurgen Klopp's team held on to seal their place in a final against holders Real Madrid on May 26. Sadio Mane had extended the Reds' aggregate lead only nine minutes in at the Stadio Olimpico, hugely easing any nerves. James Milner added his name to the wrong column of the scoresheet with an unfortunate own goal before Georginio Wijnaldum restored Liverpool's lead on the night just before the half-hour mark. Three second-half goals from Eusebio Di Francesco's side did create some anxiety, but strikes from Edin Dzeko and Radja Nainggolan (two) ultimately flattered Roma. Here, our professional coaches analyse the tactics and key moments as Liverpool reached their first Champions League final in 11 years. 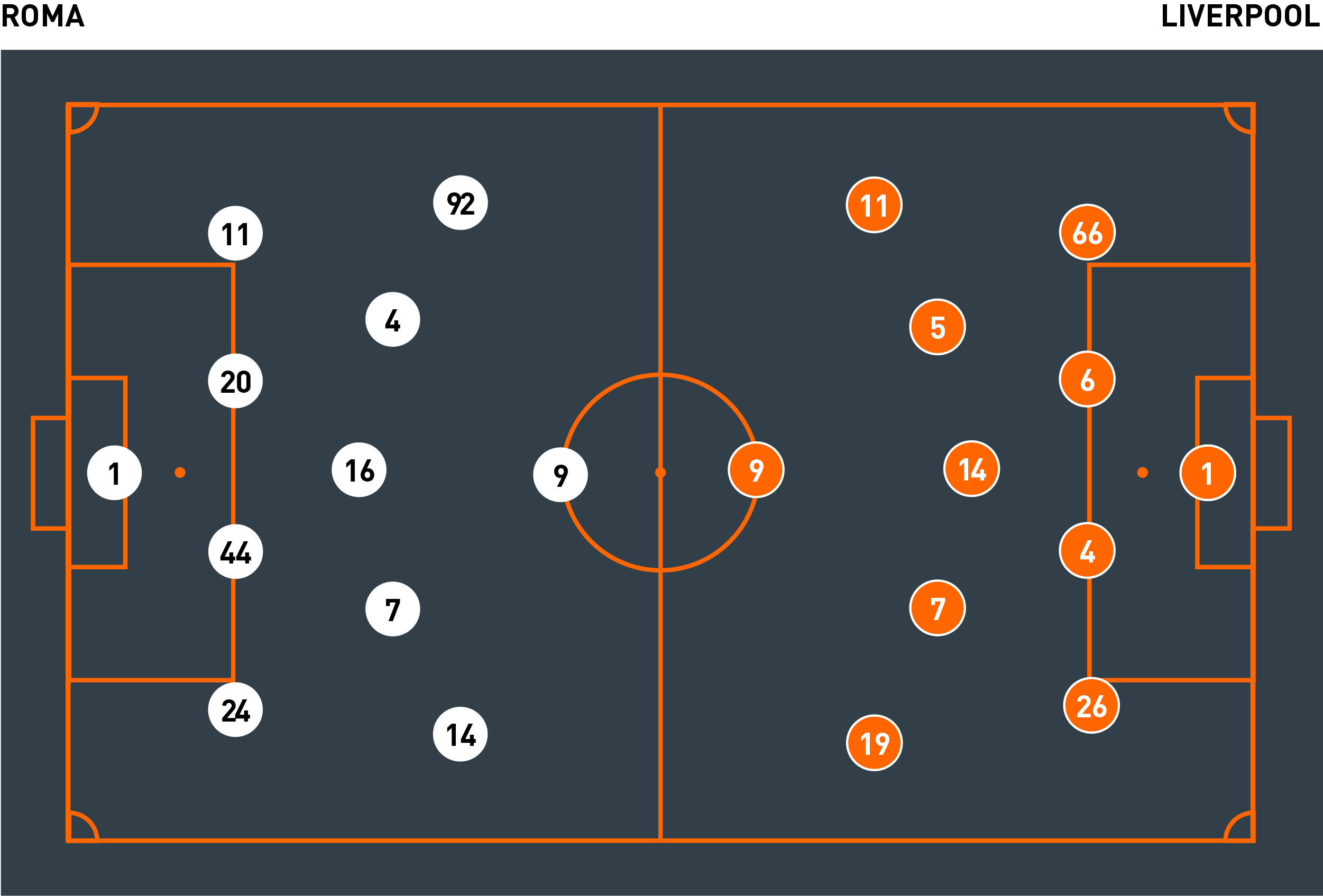 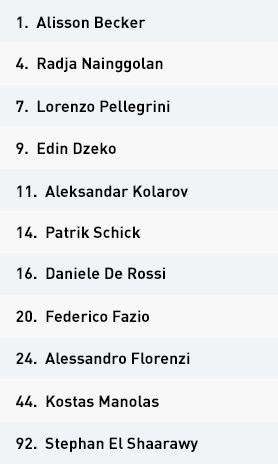 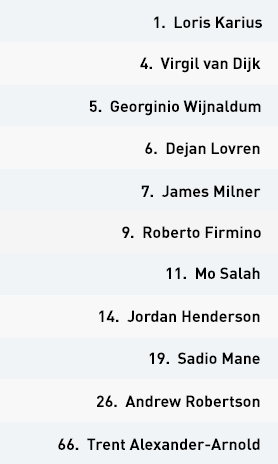 Unlike in the first leg at Anfield, Roma began in a 4-3-3 structure. Both full-backs, Alessandro Florenzi and Aleksandar Kolarov, were required to defend deeper, but still needed to provide width in attack. As they were pinned further back than they were as wing-backs, their crosses into Liverpool’s penalty area were from much deeper positions.

Roma installed a deep build through the thirds throughout the first half. Daniele De Rossi dropped in between both centre-backs, thereby allowing the full-backs to move higher during the initial building stages. Liverpool at first struggled to contain Roma’s effective build-up play, as both full-backs got forward and delivered dangerous crosses towards the aerial threat of Edin Dzeko.

Mo Salah and Sadio Mane began to recover well defensively, halting good initial progress from Roma’s full-backs. Radja Nainggolan carelessly gave away possession and Liverpool broke away at speed. Despite a comfortable and effective start, the home side were a goal down after Roberto Firmino found Mane, who finished confidently past Alisson.

Roma continued to build in wide areas. A deep cross from Florenzi found Stephan El Shaarawy at the far post, who moved blindside of young full-back Trent Alexander-Arnold and headed back across the face of goal. Dejan Lovren smashed the ball into the face of teammate James Milner, and the ball ricocheted into the bottom corner.

Georginio Wijnaldum soon headed the visitors back in front after the Roma defence failed to clear a routine second ball from a Liverpool corner kick. Despite Roma’s dominance with the ball, they were making hard work of any potential comeback.

Roma had issues with the gaps between their units throughout the second half. Having learned their lesson in the first leg, the defence played a much deeper line. The midfield unit didn’t mirror this, however, as huge gaps appeared in between Roma’s lines. Liverpool looked dangerous as their front three always looked to counter – but the Reds were wasteful, and Roma eventually pounced again.

Liverpool had a taste of their own medicine, as Roma swiftly countered. El Shaarawy collected the ball after a slip from Alexander-Arnold. The winger cut inside, unleashing a low drive that Loris Karius could only palm into the feet of Dzeko, who tapped home his team's third goal on the night.

In search of more late goals, Eusebio Di Francesco changed to a more offensive 4-2-4 structure. Despite creating more space for Liverpool to attack, Roma were the team to threaten. Under a barrage of direct play, Liverpool’s defence started to feel the pressure.

Kolarov faked a cross, cutting the ball back to Nainggolan on the edge of the Liverpool penalty area. The Belgian struck a low shot that cannoned in off the inside of the post. With only four minutes remaining plus injury time, Roma needed two more goals to force extra time.

For all their late pressure, though, Roma managed only one. Substitute Ragnar Klavan was adjudged to have handled inside the penalty area, with Nainggolan converting for his second of the evening. Roma crashed out of the Champions League, one goal shy of another remarkable comeback.

Liverpool set up in their familiar 4-3-3 formation. As expected, they were forced to handle early periods of pressure from a Roma side intent on attack.

Mo Salah and Sadio Mane were required to recover into deeper positions, as Roma’s full-backs moved higher during their building stages. To begin with, this limited the effectiveness of Liverpool’s attacking transitions, as Salah and Mane were too deep when receiving the ball.

A mistake from Roma, however, brought Liverpool to life. Roberto Firmino picked up a loose ball and drove at the hosts’ defence. The Brazilian slipped in Mane, who finished well past Alisson for an away goal – and an aggregate lead of 6-2.

Long periods of Roma pressure followed, and the visitors were unlucky to concede an equaliser. An unfortunate deflection off James Milner's face gave Roma some hope of a comeback, but another gift of a goal soon quashed any realistic hopes of a revival. A routine inswinging Milner corner wasn't cleared properly, and the ball dropped perfectly for an unmarked Georginio Wijnaldum to nod home a second away goal and earn his side a half-time lead in the night.

Jurgen Klopp's men had additional chances to kill the game off throughout the second half. Salah, Mane and Firmino were all uncharacteristically wasteful in front of goal. Consequently, the attacking front line was noticeably disconnected from the rest of the team.

With chances being wasted, Roma could immediately counter-attack against an exposed Liverpool defensive unit. Jordan Henderson and Milner, however, offered excellent central protection for Liverpool. They repeatedly slowed down, harried and often completely stifled Roma’s counter-attacks.

Despite an Edin Dzeko goal midway through the second half, Liverpool still looked comfortable. As Roma changed to a 4-2-4 structure, the Reds had much easier access into their forwards. Firmino dropped deep between Roma’s central midfield pairing, and set up additional attacks for Mane and Salah.

Roma managed to grab two very late goals, reducing the overall deficit to one, but Liverpool held on to reach their first Champions League final in 11 years.

The key battle was focused around Roma’s deep build-up play. In contrast to the first leg, they used a back four. With Daniele De Rossi dropping in between Roma’s centre-backs, Alessandro Florenzi and Aleksandar Kolarov could push higher from their full-back position.

Roma initially built with minimal Liverpool pressure, as De Rossi played comfortably into the advancing full-backs. From here, both Kolarov and Florenzi could consistently play early crosses from deep into Liverpool’s penalty area.

Liverpool reacted, as Mo Salah and Sadio Mane were struggling to persistently recover and track Roma’s advancing full-backs. Salah and Mane began to press the Roma back line much earlier during the home side’s build. As they applied pressure, they blocked off their opponents’ access to their full-backs.

Roma quickly adapted, as central defenders Federico Fazio and Kostas Manolas drove forward with the ball. Radja Nainggolan and Lorenzo Pellegrini also moved into wide areas from the centre of the park, and away from Liverpool’s central midfielders in the process. This rotation drew Salah and Mane inside, thus creating space in the wide areas for Roma to once more progress.

Despite building effectively for most of the game, Liverpool handled the majority of Roma’s crosses well, and in the end did enough to secure a place in the Champions League final – their first appearance at this stage since 2007.