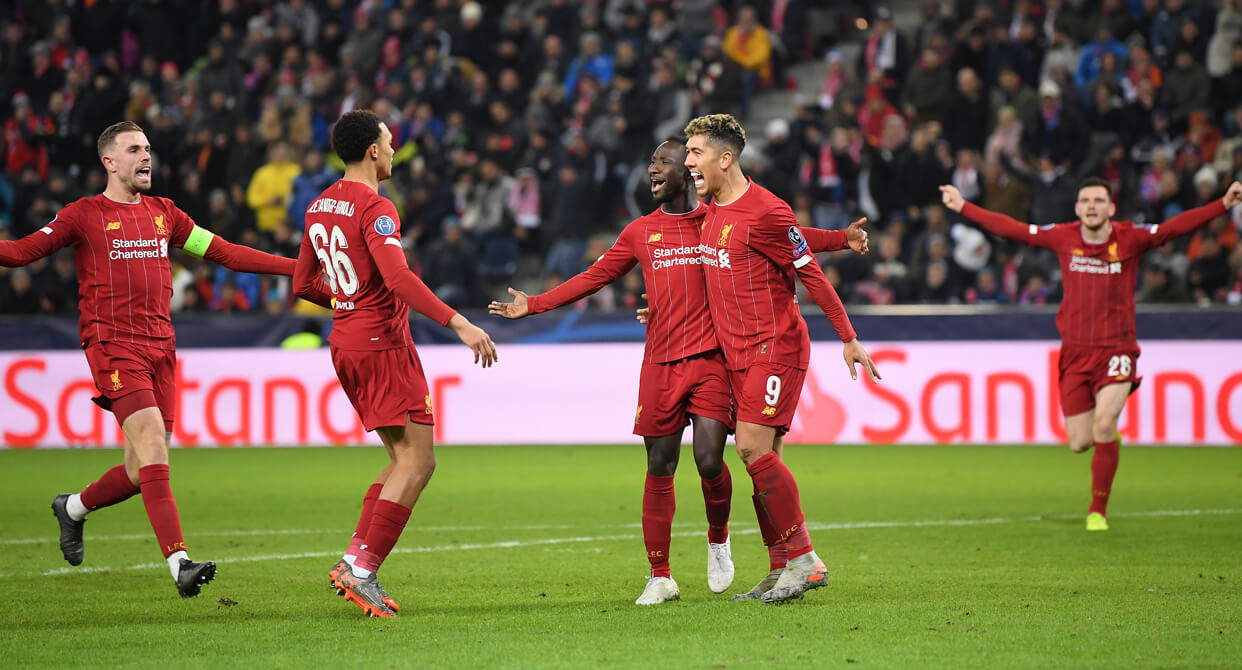 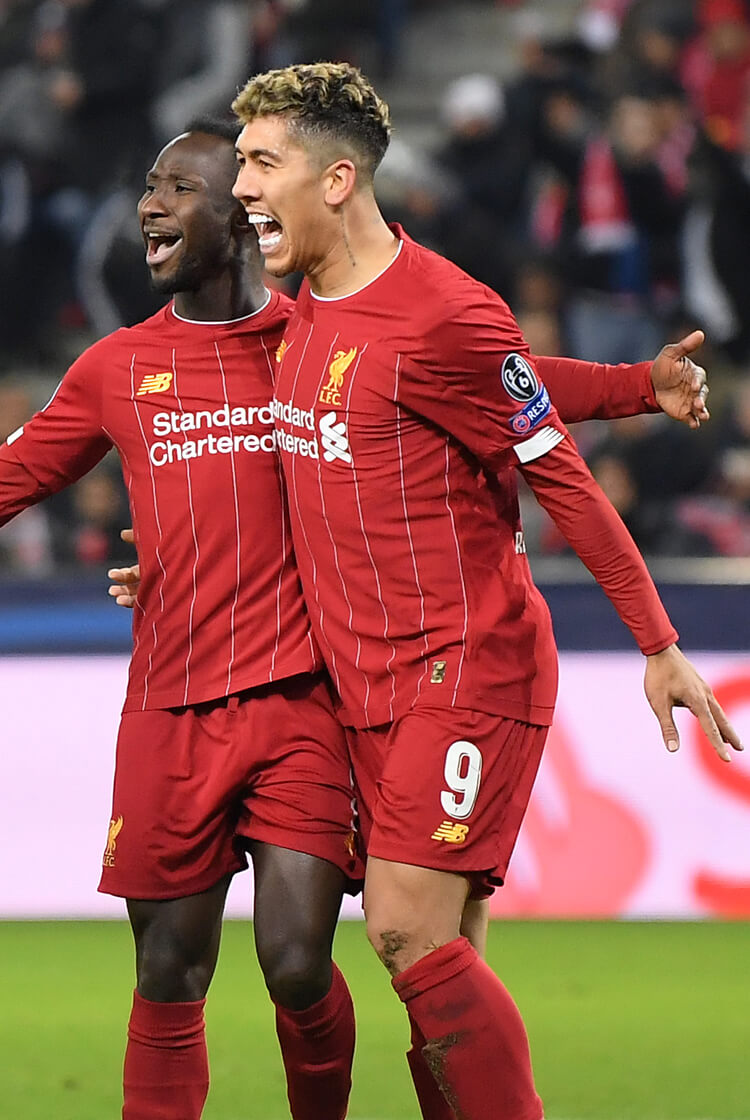 Liverpool survived an occasionally tense evening in Salzburg to run out 2-0 winners against Austrian champions Red Bull and secure top spot in their Champions League group ahead of Napoli. The defending champions needed to avoid defeat to ensure safe passage into the knockout stages, but the hosts created a number of good chances in an open first half – including more than one for the prolific Erling Haaland, who had scored eight goals in his previous five Champions League games. Liverpool goalkeeper Alisson stood firm, however, and Jurgen Klopp's men put the game to bed with two goals in two minutes early in the second half. Naby Keita followed up his man-of-the-match display against Bournemouth with a clever header at the end of an excellent team move, with Mo Salah – who had missed a couple of excellent first-half chances – doubling the lead from a seemingly impossible angle a minute later. The Reds had few moments of concern after that, securing their eighth win in their last nine games in all competitions. 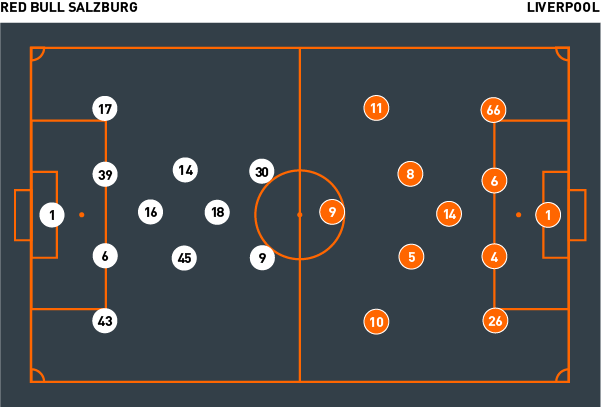 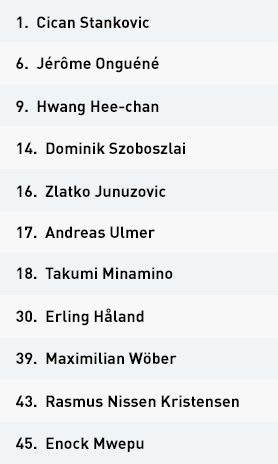 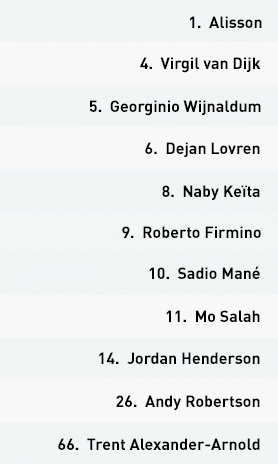 Head coach Jesse Marsch set his Red Bull Salzburg team up in a 4-4-2 diamond formation with Zlatko Junuzovic at the base, Dominik Szoboszlai and Enock Mwepu either side, and Takumi Minamino at the top. Erling Braut Haaland and Hwang Hee-chan started as a front two.

The hosts looked to try and build from the back where possible, but found limited movement ahead of the ball in midfield in the early stages made it difficult to penetrate. They instead looked to release Haaland and Hwang into the channels with passes in behind, but Liverpool centre-backs Dejan Lovren and Virgil van Dijk moved across to cover these spaces and ensured that the Salzburg attackers couldn’t receive and run towards goal.

Because the forwards’ starting positions were mostly central, these runs into the channels meant that they were making movements away from goal with their chests directed towards the corner flag, making it easier for the Liverpool defenders to protect the more dangerous areas, get tight to the run and shepherd the ball towards the touchline.


As the game progressed, Salzburg began looking to use Minamino and the ball-side forward to drop. This created overloads in the second phase of the build-up and provided the hosts with forward passes that would break the midfield line and allow them to continue the attack. Liverpool’s press wasn’t consistently high and aggressive, most likely due to the number of games they have to play over the festive period. Instead, they operated in a mid-high block while maintaining a reasonably high defensive line. This encouraged Salzburg to play in behind – which, as already mentioned, Liverpool were happy to deal with.

Salzburg had a ‘forward first’ mentality about their in-possession approach, and looked to play early passes that would break lines and support them with runs from deep that would go beyond the defensive line. Haaland had a number of opportunities, peeling away from Lovren to receive a pass outside the Croatian defender; however, he was still too close and the passing line wasn’t wide enough to provide a successful outcome.

In the second half, Liverpool’s move to a 4-2-3-1 formation from their initial 4-3-3 allowed Mo Salah to press the two Salzburg centre-backs while keeping sufficient numbers behind the ball to be able to affect the full-backs and all four points of the diamond without disrupting the positioning of the defensive line.

The visitors found their build-up difficult initially, against a well-organised defensive structure. Salzburg used their front two to press the two centre-backs, while Takumi Minamino positioned himself on Henderson; the players on the outside of the diamond would press the Liverpool full-backs whenever the ball travelled out to them. Zlatko Junuzovic’s role at the base of the diamond was to maintain balance and screen passes into Firmino, as well as picking the Brazilian up whenever he dropped in.

Liverpool adapted to these initial struggles by using Henderson as both a false centre-back and false full-back. This often pulled Salzburg into a flatter line as they tried to maintain their responsibilities, opening up spaces between the attacking and midfield lines where Wijnaldum and Keita could receive.

The Reds also looked to utilise switches of play, preying on a potential weakness of the diamond. When the ball was with Virgil van Dijk or Dejan Lovren, the outside points of the diamond had not yet moved out to their respective full-backs because doing so would have opened up spaces inside; this meant that a diagonal, driven switch from centre-back to far-side full-back had the potential to bypass the Salzburg midfield and either allow the Liverpool full-back to receive freely or draw out the Salzburg full-back and create space for the Liverpool wide attacker ahead of him. It was yet another switch from one full-back to another, in this instance Trent Alexander-Arnold to Andy Robertson, that started the move that led to Keita’s opening goal early in the second half.

Ahead of the ball, Liverpool looked to use vertical rotations to try and bypass the Salzburg defence. This usually involved Firmino or Mané dropping and one of Wijnaldum or Keita running beyond; the ball was then played to the dropping player, who was able to advance possession and then make the next penetrative run.

In the second half, Klopp switched to a 4-2-3-1 shape, with Keita moving out to the right, Firmino playing as an attacking central midfielder and Salah now operating as the lone striker. The switch was designed to stretch Salzburg, whose full-backs now had further to travel to pick up the deeper wide attackers – Mané and Keita – while Liverpool maintained the threat of Salah in behind. This opened up bigger spaces in the channels for the Egyptian to run into, as seen for the second goal just a minute after Keita’s first.

The change in formation also allowed Liverpool to continue using runners from deep. With Salah as the highest point and the other three attackers operating deeper, Liverpool were able to play forward to Salah and have their other players making runs in behind him from these positions. It gave the Salzburg defensive structure more to do on all counts, as the visitors ran out comfortable winners after an occasionally tricky first half.