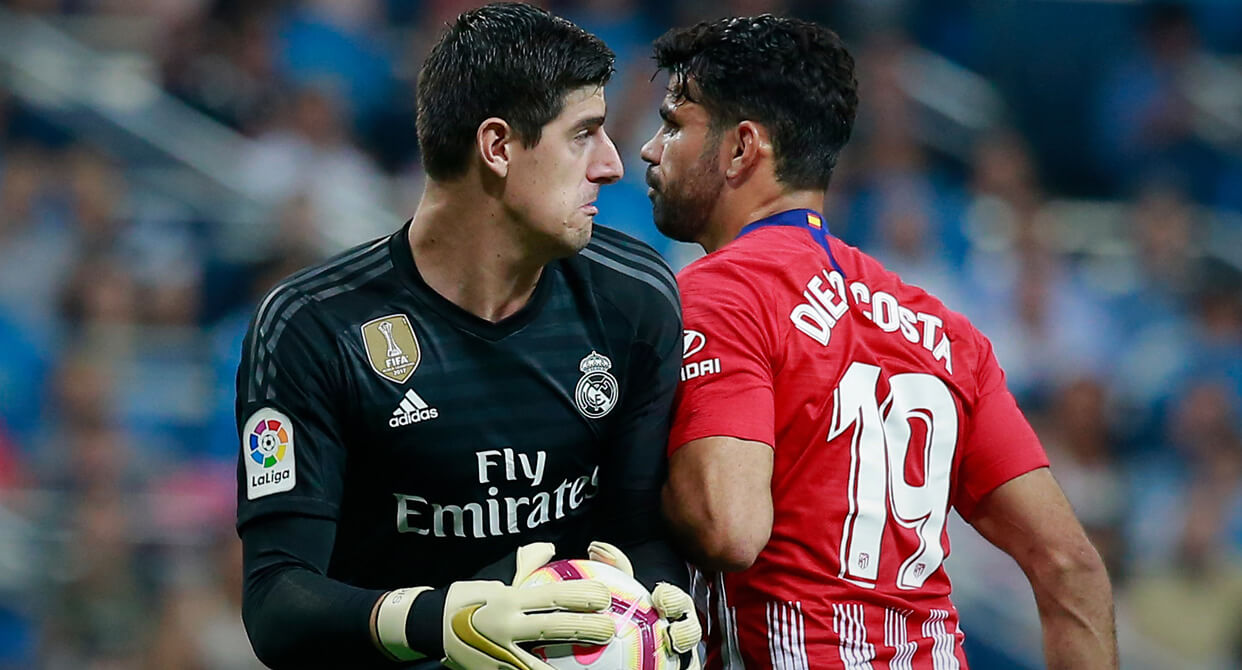 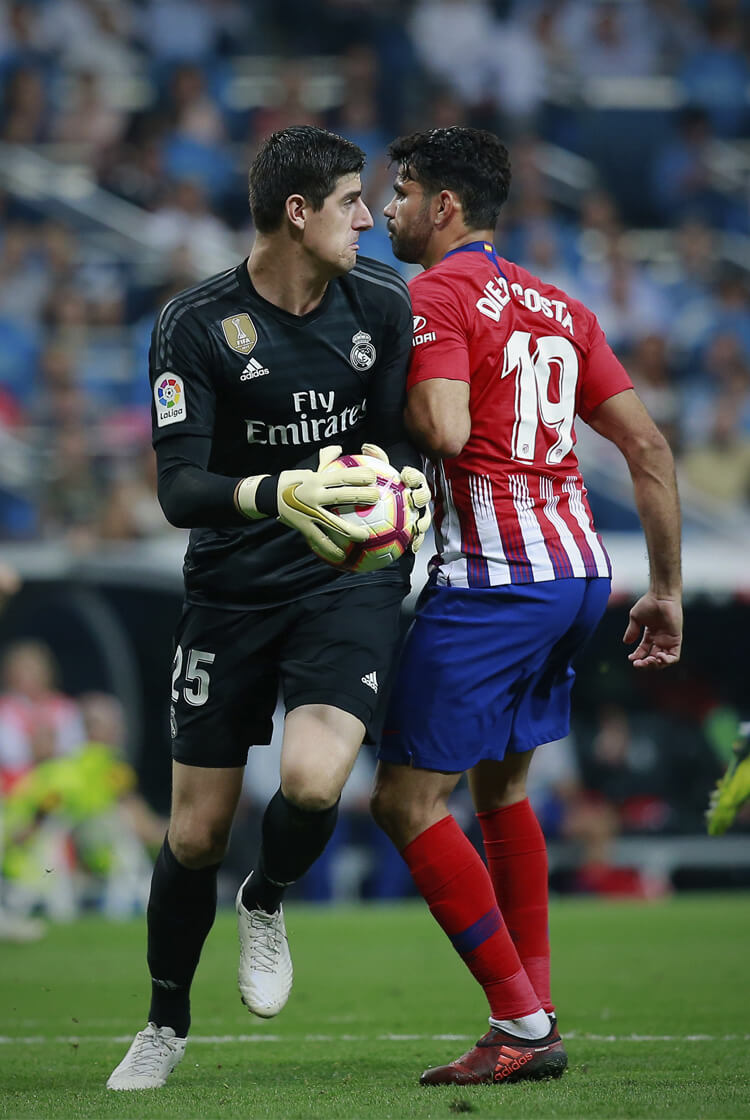 Real Madrid failed to hit the back of the net for a second successive La Liga fixture, with their 3-0 defeat to Sevilla leading into this goalless draw with city rivals Atletico Madrid at the Santiago Bernabeu. Both sides had opportunities to score, with Gareth Bale, who was withdrawn at half-time through injury, and Antoine Griezmann coming close – but goalkeepers Thibaut Courtois and Jan Oblak were rarely called into action in a predictably tight affair. Fortunately for Real, title rivals Barcelona have also hit their own difficult patch of form, also taking just the solitary point from their last two league games. Barca and Real remain first and second in the La Liga table after seven games, but Sevilla and Atletico are now breathing down their necks. 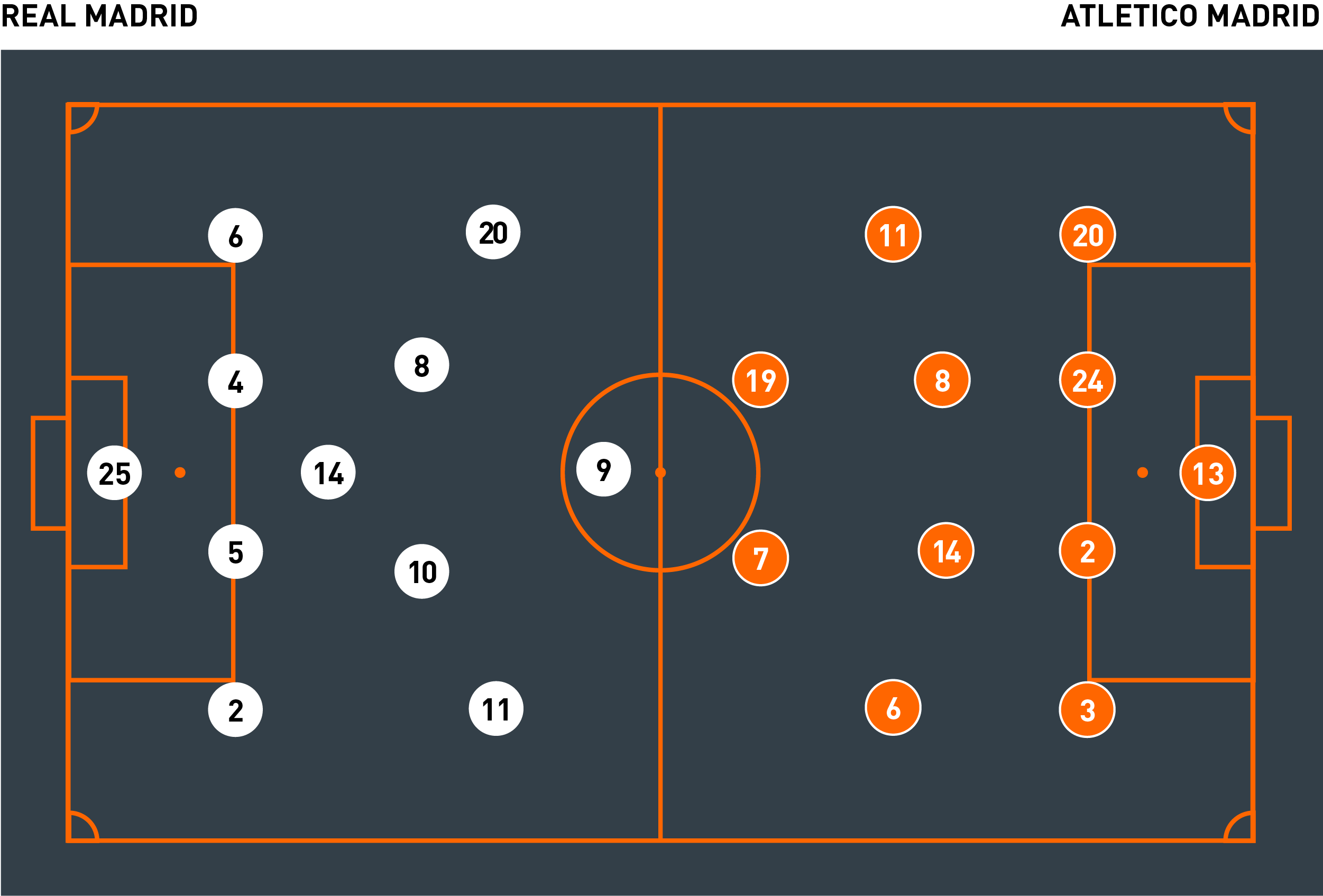 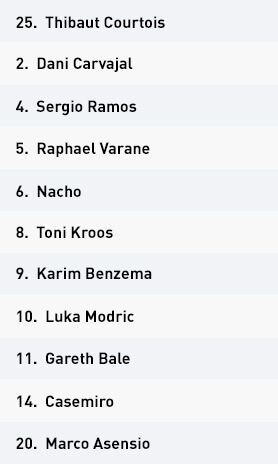 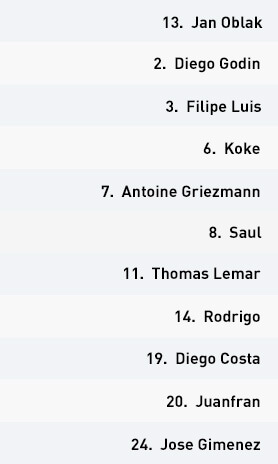 Real Madrid set up in a 4-3-3 formation, with Casemiro just behind Luka Modric and Toni Kroos at the base of midfield. Marco Asensio, Gareth Bale and Karim Benzema formed the attacking trio.

As is often the case, Los Blancos had to display patience with the ball – across the 90 minutes, they recorded 62 per cent possession and racked up 738 passes. Despite their dominance in possession, though, they had major difficulties in breaking down a typically well-organised Atletico block. They played plenty of horizontal passes across their back line and midfield, rarely finding a way through.

Most problematic with their circulation was the ball speed, pass detail and movement ahead of play. The ball tended to move slowly between individuals, increasing the ease with which their opponents could adjust to the new position. On far too many occasions, the ball was played behind the intended target, further slowing down the attack, while they often had too many players in front of and around the Atleti block, thereby reducing their opportunities to penetrate. They were limited to shots from distance, as a result, appearing to lack invention in how to unlock the visitors’ defence.

They set up in a 4-1-4-1 formation out of possession, generally operating in a mid-block. Casemiro was positioned between the lines but would remain close to the defensive line – this meant that the Brazilian could provide central cover for centre-backs Sergio Ramos and Raphael Varane, if the pair were pulled out of the central area to track a penetrative run in behind the defence. Bale and Asensio would tuck in alongside Kroos and Modric to form a midfield four, while Benzema remained up top.

Real spent little time out of possession, however, with their main issues in transition. As they committed so many players forward, leaving only Ramos and Varane back, they were vulnerable to counter-attacks – and this could have led to goals for Atleti on two occasions. They did sometimes press their opponents higher up the pitch, typically in transitional moments and from goal-kicks.

A lack of imagination in breaking down Diego Simeone’s side and a failure to really test goalkeeper Jan Oblak contributed to Real not finding the back of the net for a second successive. Unlike in their 3-0 defeat to Sevilla, however, they at least left this game with a point.

Atletico Madrid set up in a 4-4-2 formation, with Diego Costa and Antoine Griezmann leading the line ahead of Koke, Rodrigo, Saul and Thomas Lemar in midfield. Their key strategy was to wait for Real Madrid to make a mistake and then launch a rapid counter-attack. They managed to do exactly that on a few occasions – but Griezmann and Costa saw their efforts saved by Thibaut Courtois.

Initially, they tended to go long from goalkeeper Jan Oblak and tried to pick up second balls in the Real half – but there were also occasions when they would play out from the back. Rodrigo would often drop deep and play in front of the centre-backs during the build-up, allowing full-backs Filipe Luis and Juanfran to push up and play as wide midfielders, while Lemar and Koke were pushed inside. This resulted in two inside central midfielders and two outside central midfielders who more or less played on the same line. The result was that they could overload the central area, maintain width through their full-backs and have the midfield four already in a compact shape, well-positioned to transition to their out-of-possession structure.

Atletico remained in their 4-4-2 shape out of possession, setting up in an exceptionally well-organised mid to low block. Their individuals and units maintained compactness horizontally and vertically, ensuring that Real couldn’t penetrate them centrally – which worked to keep the hosts away from the penalty box at all times. They would show their opponents out wide, making sure that passing lines inside were shut off and anything that did find its way inside was swarmed upon immediately. When the ball was transferred out wide, the full-back and wide midfielder on that side would press together, intending to trap the opponent against the touchline and force a turnover or a throw-in. The striker on that side would occasionally assist this, trapping the ball carrier so he couldn’t even look to play a pass backwards.

Only from goal-kicks would Atletico look to press Real, where they would initiate a man-oriented press – so that when the ball moved, the pressing player would shut off the angle of a return pass and show the player outside. This culminated in a pass that could be intercepted, a pass to the feet of a teammate with his back to goal, who could then be pressed aggressively, or a direct pass that the centre-backs could deal with. Diego Simeone’s men refused to allow Real any opportunities to penetrate, and might feel they should have taken the three points, had they capitalised on a particularly threatening first-half performance.