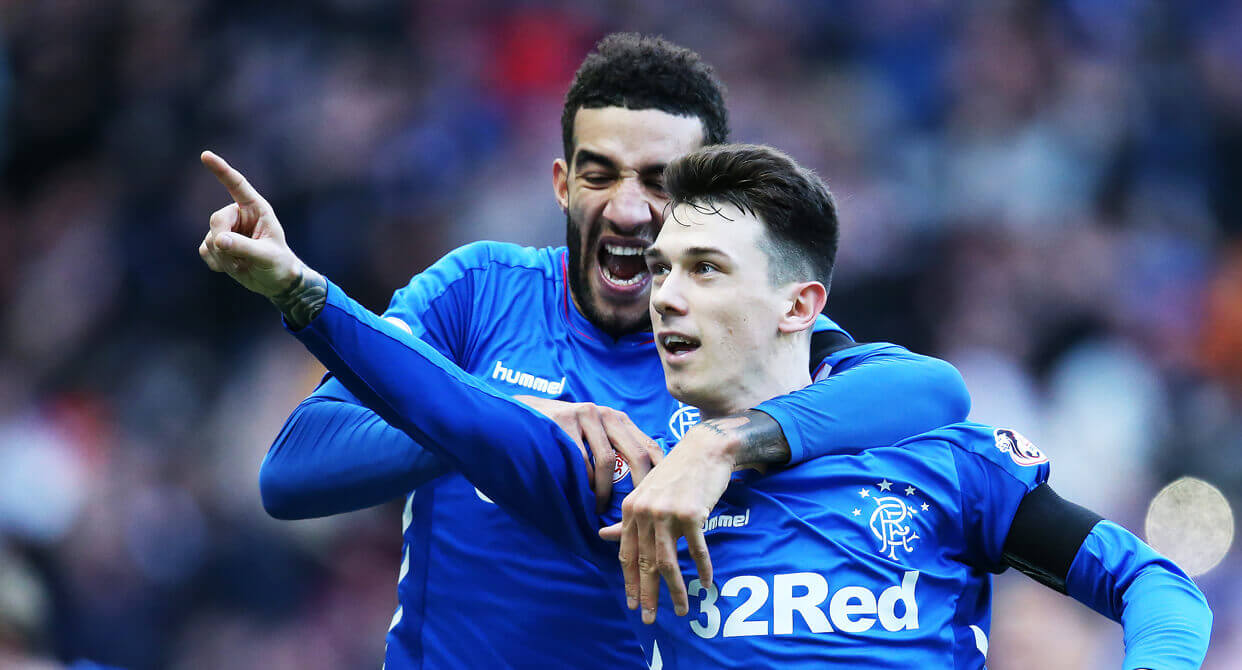 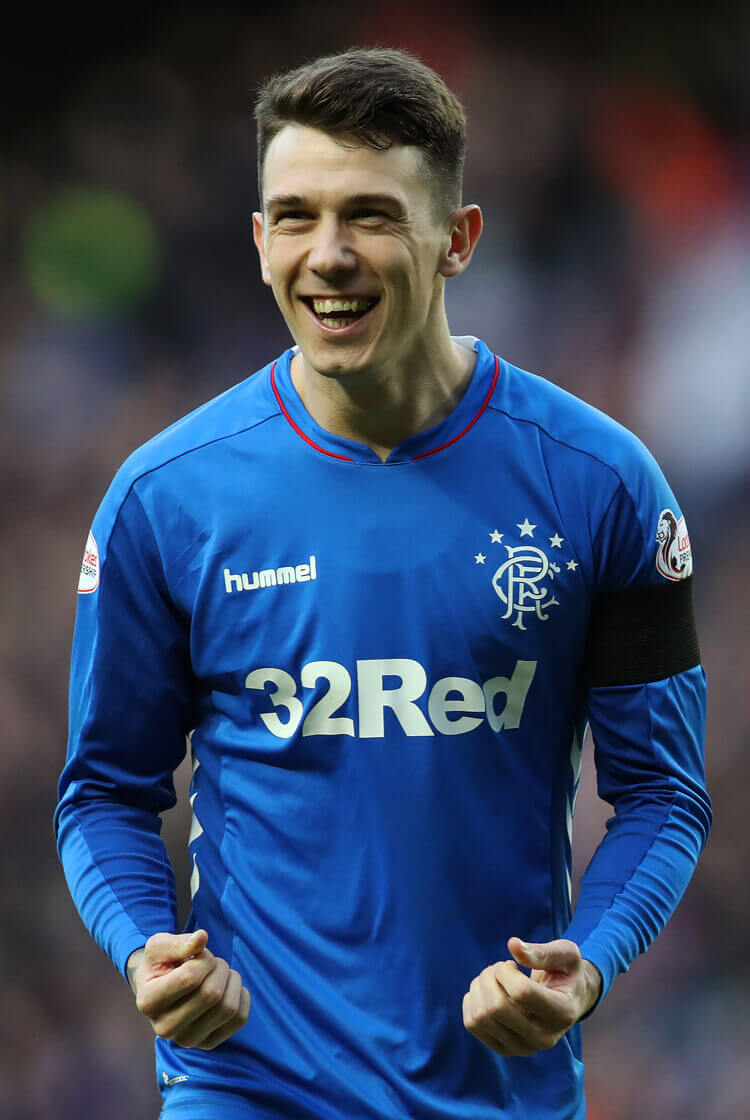 Steven Gerrard inflicted a first Glasgow derby defeat on his old boss Brendan Rodgers, with the former Liverpool captain’s Rangers side edging a typically competitive clash at Ibrox. The hosts more than deserved their 1-0 victory, however, and arguably should have been ahead long before Ryan Kent cut back for Ryan Jack to slot home through the legs of Scott Brown after half an hour. The Celtic captain was one of only four players to receive a card in a game very well handled by referee John Beaton, but in truth the champions created little against an obdurate and well-organised home defence. Callum McGregor’s second-half strike was correctly ruled out for offside as the hosts held on for a victory that took them level on points with leaders Celtic as the teams head into the winter break. 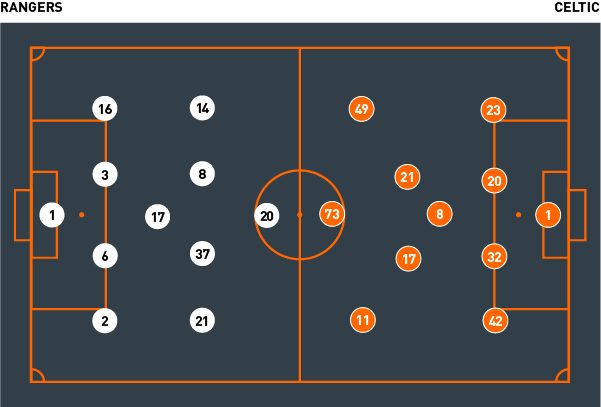 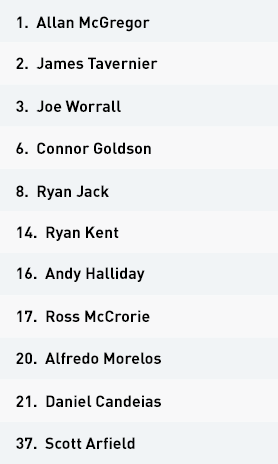 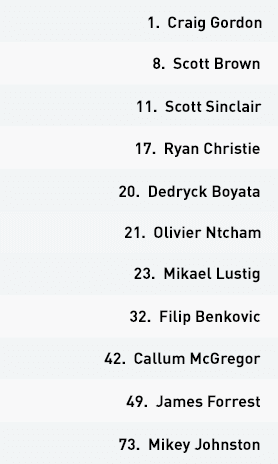 Steven Gerrard set his Rangers team up in a 4-1-4-1 formation, with Ross McCrorie operating between the defensive and midfield lines. Daniel Candeias, Scott Arfield, Ryan Jack and Ryan Kent operated as a midfield four behind lone forward Alfredo Morelos.

Rangers had two main sources of attack. The first was to play direct passes to Morelos – either into his feet for him to hold the play up and bring others into the attack, or into the channels between centre-back and full-back for him to chase. These runs into the channels would trigger the attacking runs of central midfielders Arfield and Jack towards the Celtic box.

The other source of Rangers attacks was in the wide areas. The relationship between full-back, wide midfielder and central midfielder was important in creating these opportunities. Full-backs Andy Halliday and particularly James Tavernier played in advanced positions to assist with the combinations and effectively eliminate the Celtic full-backs. It was from wide play on the left that Rangers scored the only goal of the game, with Kent eventually setting back for namesake Jack to finish through the legs of Celtic captain Scott Brown.

Out of possession, Rangers remained in their 4-1-4-1 structure and initiated an aggressive high press against Celtic whenever they tried to play out from the back. If Morelos stepped up to press goalkeeper Craig Gordon, Kent would move in from the left to cover Dedryck Boyata while Arfield would lock on to Scott Brown. At other times, Morelos pressed the centre-backs; this allowed Kent and Candeias to press the full-backs on their side, while Arfield stayed on Brown. Jack and McCrorie would then deal with Olivier Ntcham and Ryan Christie.

In the second half, the hosts were happier to operate in a deeper structure, and let Boyata and substitute Kristoffer Ajer have the ball. With Morelos staying high, Rangers always had an out ball once they regained possession, which in turn meant they weren’t just gifting the ball back to Celtic. Further back, the defensive line of four were on the front foot throughout the game; they were always happy to step out with Celtic players dropping and prevent them from turning. This worked to negate much of the visitors’ threat, helping Rangers secure a clean sheet – and a first league win over their great rivals since March 2012.

Celtic manager Brendan Rodgers set his team up in a 4-3-3 formation, with Scott Brown, Ryan Christie and Olivier Ntcham operating as a midfield three behind James Forrest, Scott Sinclair and Mikey Johnston in attack. The Scottish champions tried to keep possession and build from the back and through the thirds, but they had significant difficulty in breaking Rangers’ aggressive high press. They regularly gave the ball away in the first half, to the point where goalkeeper Craig Gordon started to send the ball long from his goal-kicks.

In the second half, with Rangers dropping off to protect their lead, Celtic were able to bring the ball out more. The visitors regularly dropped players towards the ball and played into their feet, looking to then set the ball back to a forward-facing player who could play a penetrating pass through. However, the ball was often lost when it went into the attackers’ feet, with the receiver swarmed by Rangers players both from the front and behind.

To get around this, Celtic tried to use the relationship between their wide attackers and central midfielders to initiate opposite movements in an attempt to create space. For example, Sinclair would occasionally drop deeper on the left, with Christie pushing forward into that space from a central area. On the right, Forrest would drift into the half-space, allowing Mikael Lustig to push up and support the attack from right-back. In truth, however, the Bhoys struggled to gain any attacking foothold in the game – a fact borne out by them having only one shot on target in the whole game.


Out of possession, Celtic operated in a 4-1-4-1 formation. Brown dropped between the defensive and midfield lines, while Forrest and Sinclair recovered alongside Christie and Ntcham in a flat midfield four that proved a natural transition from their 4-3-3 in possession. The visitors looked to press Rangers particularly high, with Johnston tending to follow the ball between Connor Goldson and Joe Worrall, but only within the width of the centre circle and always looking to screen the ball into Ross McCrorie’s feet.

The trigger for Celtic to initiate an even more intense press was when the ball was played into the Rangers full-backs. Sinclair or Forrest would engage and be supported by the nearest central midfielder, while Brown would also come across to support and the full-back on that side would squeeze up too. Despite this, Celtic struggled to cope with Rangers’ wide play and subsequent balls into the box – it was only thanks to a number of excellent saves from Gordon that they managed to stay in the game. In the end, they were unable to rescue anything and went into the winter break ahead of their bitter rivals only on goal difference.