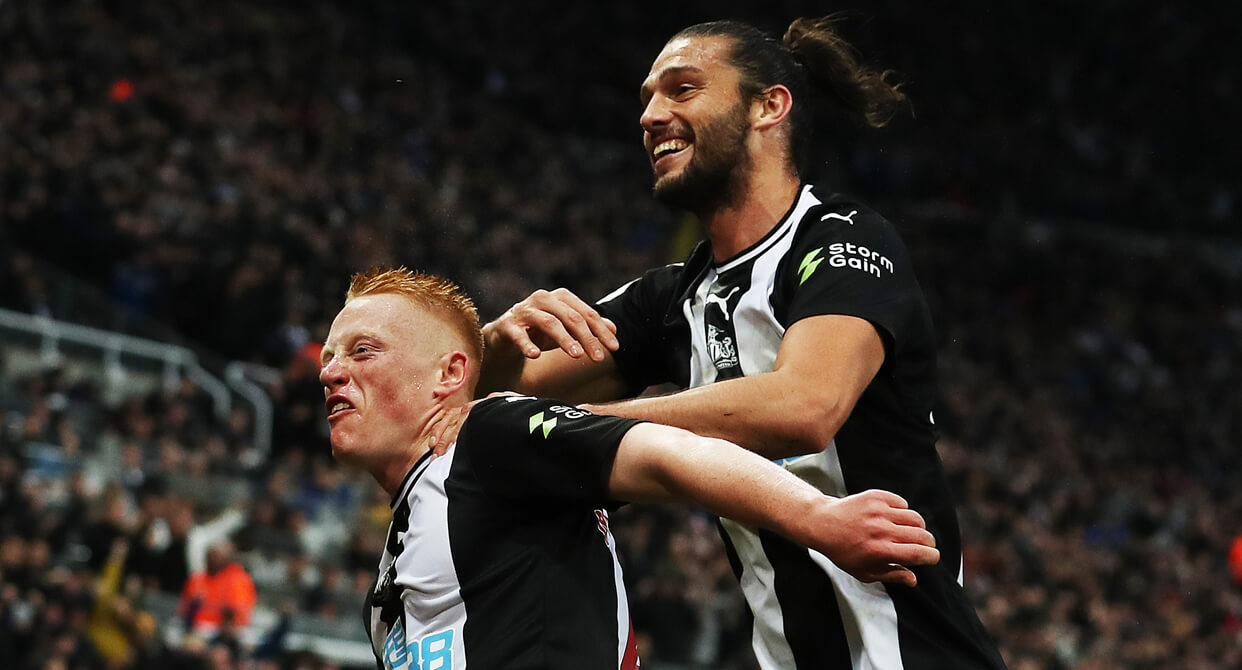 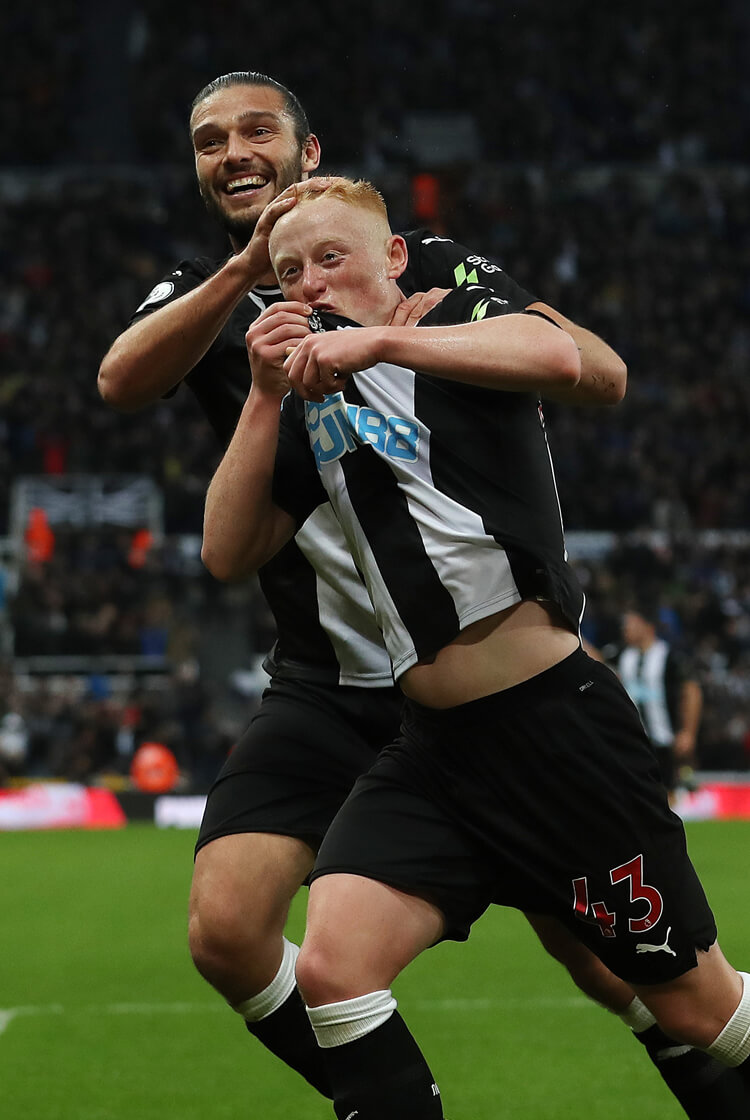 Manchester United remain without an away win of any kind since last season’s Champions League victory in Paris following another anaemic display in defeat at St James’ Park. Steve Bruce’s Newcastle started the game in the Premier League’s bottom three and without a home win this season, but a United team missing the likes of Luke Shaw, Aaron Wan-Bissaka, Paul Pogba and Anthony Martial struggled to find any rhythm and instead fell victim to a debut goal from Magpies midfielder Matty Longstaff midway through the second half. Victory – Bruce’s first as a manager over his old club – took Newcastle out of the bottom three, while defeat left United languishing in the bottom half of a table dominated by rivals Liverpool and Manchester City. 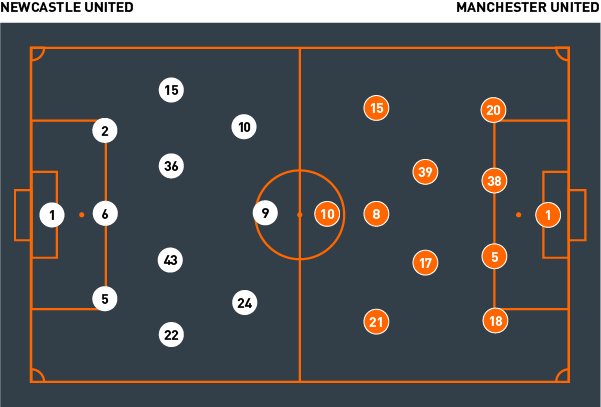 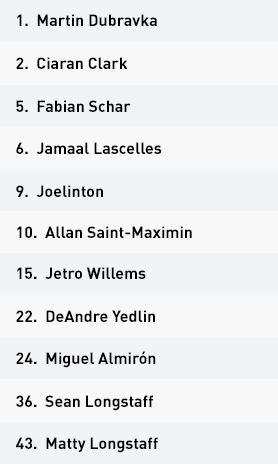 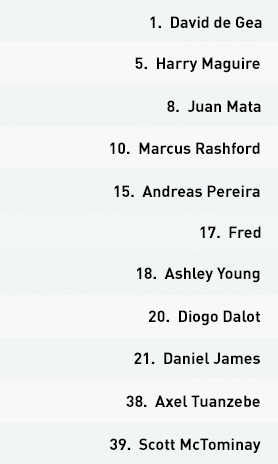 Steve Bruce set Newcastle up in a 3-4-3 formation in possession, with wing-backs DeAndre Yedlin and Jetro Willems joining Matty Longstaff and Sean Longstaff in midfield; Miguel Almiron and Allan Saint-Maximin pushed up to form the attacking line of three with Joelinton.

The hosts made their intentions very clear in the early stages of the game, demonstrating their transitional threat as early as the first minute, with five or six forward runners on the counter-attack. They had very few examples of established possession and tended to send direct passes to Joelinton and, later, Andy Carroll. The Longstaff brothers in midfield tended to operate deeper than Joelinton when he was receiving a direct pass; they would thus be forward-facing so that they could receive the set from the striker and play forward to one of the advancing runners – typically, Willems, Saint-Maximin, Almiron and Yedlin.

After the imposing figure of Carroll was introduced, Newcastle were more confident in delivering crosses into the box. The Magpies also looked to find the feet of Saint-Maximin where possible, and encouraged him to drive at and take on the Manchester United defenders. This caused consistent problems for the visitors, although the final action was often lacking.


Manchester United utilised a man-oriented high press out of possession, as they looked to rush Newcastle into passing forward early and making mistakes. With the ball central, United tended to use Marcus Rashford, Juan Mata and one of Andreas Pereira or Daniel James to match up against the three Newcastle centre-backs, while Fred and Scott McTominay picked up the hosts’ central midfielders. The most important aspect of this structure was that, when the ball was with the outside centre-backs, the man pressing had to ensure he screened the pass into the Newcastle wing-back on that side; otherwise, Newcastle would evade the press and be able to advance.

On the rare occasion that United took up an established defensive shape, they would use a 4-4-2 structure in which Mata joined Rashford on the top line. Daniel James and Andreas Pereira then tucked in with McTominay and Fred to make a midfield line of four.

Ole Gunnar Solskjaer set Manchester United set up in a 4-2-3-1 formation, with Scott McTominay and Fred as the two deep central midfielders behind an attacking midfield trio of Andreas Pereira, Juan Mata and Daniel James. The visitors dominated possession and had to try to break down a compact Newcastle block that had no interest in engaging defensively before the halfway line.

United tried to find their attacking midfielders between the lines as frequently as possible, but the passing lines were often blocked off by an organised Newcastle midfield. Instead, they frequently sent long passes in behind for lone striker Marcus Rashford, but with space tight the pass needed to be exceptionally precise and the run very well timed – and the Newcastle centre-backs dealt well with his runs.

In the second half, Rashford dropped slightly deeper, towards the ball; this brought one Newcastle centre-back with him and created space in behind that he could then look to run into. United also looked to try and exploit the wide areas through the relationship between their full-backs and wide attackers. The full-back would look to advance where possible, but would always try to be on a different line to the winger; this was designed to provoke uncertainty within the Newcastle block regarding who went out to engage, who covered and when to pass players on. The hosts answered these questions well, however, and as the game progressed United resorted to sending crosses into the box that the three Newcastle centre-backs dealt with easily.

Steve Bruce’s men utilised a 5-4-1 formation out of possession, with Allan Saint-Maximin and Miguel Almiron tucking in alongside Matty and Sean Longstaff in a midfield line of four. DeAndre Yedlin and Jetro Willems joined Fabian Schar, Jamaal Lascelles and Ciaran Clark in a back five, as Newcastle made it clear they were not looking to press United high. They instead looked to remain compact and allow them to come forward while waiting for the opportunity to hit the visitors on the counter-attack.

Newcastle knew their responsibilities well, defensively. The key aspect of their defensive structure was the relationship between the wing-back and the wide midfielder, in terms of who would go and press in wide areas. If the United wide attacker moved inside, then Yedlin or Willems would move out to press the full-back while Almiron or Saint-Maximin tucked inside to maintain the midfield compactness. However, if the United wide attacker was high and wide, then the Newcastle wide midfielder would go out to engage the full-back, with the wing-back remaining in his line of five. By defending in this way, Newcastle ensured that they always protected the most dangerous space.

The centre-backs, meanwhile, had to be cautious with picking up United’s attacking midfielders between the lines. They would allow the attackers to position themselves there, and would only move out to affect them if the ball was on its way into their feet. Otherwise they would remain in their shape and ensure that they stayed compact and could see both man and ball – an approach that worked to great effect as they registered their first home league win of the season.