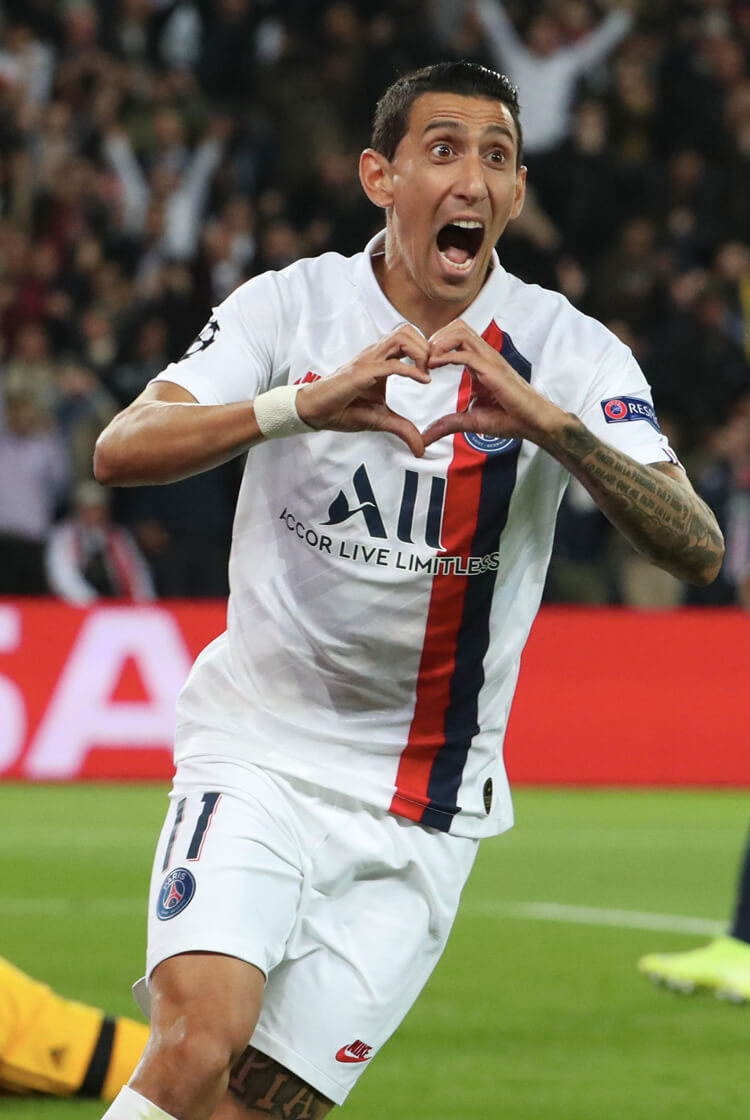 Thirteen-time European champions Real Madrid got off to the worst possible start in their latest Champions League campaign, as Zinedine Zidane’s men were soundly beaten by Paris Saint-Germain in the French capital. Head coach Thomas Tuchel was without his feted front three of Neymar, Kylian Mbappé and Edinson Cavani, but two first-half goals from former Madrid player Angel di Maria helped the hosts into a commanding lead they never looked likely to relinquish. Gareth Bale and Karim Benzema had strikes disallowed either side of half-time, but Real struggled to find any consistent rhythm and the game was lost by the time PSG full-backs Juan Bernat and Thomas Meunier combined for the hosts’ third in added time. 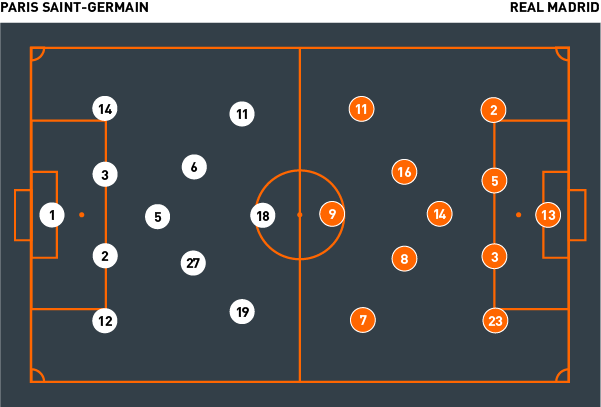 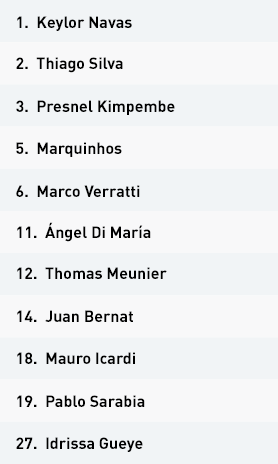 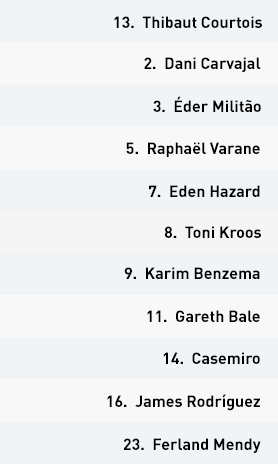 Thomas Tuchel set his Paris-Saint Germain team up in a 4-3-3 formation, with Marquinhos, Idrissa Gueye and Marco Verratti as the three central midfielders behind an attacking trio of Angel di Maria, Mauro Icardi and Pablo Sarabia.

The hosts looked to build from the back and would create diamond structures in order to try and overload any Madrid players trying to closing them down. These structures would typically comprise the centre-back on the ball, single pivot Marquinhos, and the full-back and central midfielder on that side; on the right, for example, that would mean Thiago Silva, Thomas Meunier, Marquinhos and Idrissa Gueye.

Real Madrid had particular issues with releasing players to press the PSG full-backs, so this was a constant outlet for the home side. As the ball travelled wide, PSG would look to play forward down the line, behind the Madrid full-back. This pass would be met by an underlapping run from either the central midfielder or wide attacker on that flank. As the underlapping player moved towards the ball and Madrid moved across to adjust, another player in the same rotation – usually featuring full-back, central midfielder and wide attacker – would make a further inside run on the blindside of the Madrid block to receive the next pass. The hosts constantly looked to their attacking players to drift horizontally across the pitch, to make life difficult for their opposite numbers and create gaps through which they could penetrate.


Real Madrid set up in a 4-5-1 shape out of possession, with Gareth Bale and Eden Hazard joining James Rodriguez, Casemiro and Toni Kroos to form a midfield line of five behind Karim Benzema. Benzema tried to screen passes into Marquinhos while applying mild pressure on Thiago Silva; Bale pressed PSG left-back Juan Bernat but also tried to screen passes inside to Verratti, while on the other flank Hazard looked to affect Thomas Meunier while screening balls into Gueye. Casemiro sat behind his central-midfield teammates and would cover any time James or Kroos pushed forward to support Benzema.

Whenever the PSG midfielders looked to penetrate behind Real full-backs Ferland Mendy and Dani Carvajal, the centre-backs had to move across to cover these runs, leaving more vulnerability in the middle. Madrid were organised in their attempts to form the block, but once PSG started to rotate and their players roam, the visitors looked more a collection of individuals than a team. Inconsistent pressure led to several gaps appearing and gave the hosts simple opportunities to play through, in what was ultimately a comfortable home victory.

Zinedine Zidane set Real Madrid up in a 4-3-3 formation in possession, with Gareth Bale, Karim Benzema and Eden Hazard as the front three ahead of Casemiro, James Rodriguez and Toni Kroos. The visitors tended to try and build with Casemiro and Kroos deeper, while James pushed up into more advanced positions.

On the ball, Real attempted to move individuals from the PSG units in different directions and create space to play. Benzema would often look to make threatening runs in behind, which would cause centre-backs Thiago Silva and Presnel Kimpembe to drop and protect the space in behind. Hazard could then drop towards the ball and receive between the lines, with space to turn. On the right, Bale would drop deep and wide to allow James to push up in the half-space – but the quality of PSG’s work out of possession limited the impact of Real’s movement, and the visitors struggled to move the ball well or quickly enough to offer any sustained threat. Their total of zero shots on target gives ample evidence of that.

The hosts adopted a 4-1-4-1 formation out of possession, with Di Maria and Sarabia playing alongside Verratti and Gueye in a midfield line of four ahead of Marquinhos and behind Icardi. They looked to press aggressively when Madrid were playing out from the back, and had some success when doing so. Icardi mostly pressed Eder Militao, with Verratti ready to jump to Varane if the ball came his way, and Marquinhos available to cover Casemiro or Toni Kroos if he did so. The co-ordination between the PSG midfielders out of possession, and their desire to cover each other, impressed throughout. The mentality was to ensure that any Madrid player receiving a forward pass had no time to turn and would be pressed from numerous angles; this level of intensity was integral to Madrid’s consistent failure to penetrate in any meaningful way.

When not pressing high, PSG tried to restrict space by maintaining a compact distance between their defensive and midfield lines. Again, the central midfielders were key in denying Madrid opportunities to penetrate by screening passes into the forwards but also being in a position to move out and press should Kroos, James or Casemiro receive possession. If Madrid did manage to move the ball between the lines, then the PSG midfielders would turn to press from behind – thus supporting their defensive line and ensuring the visiting attack had minimal space in which to work.