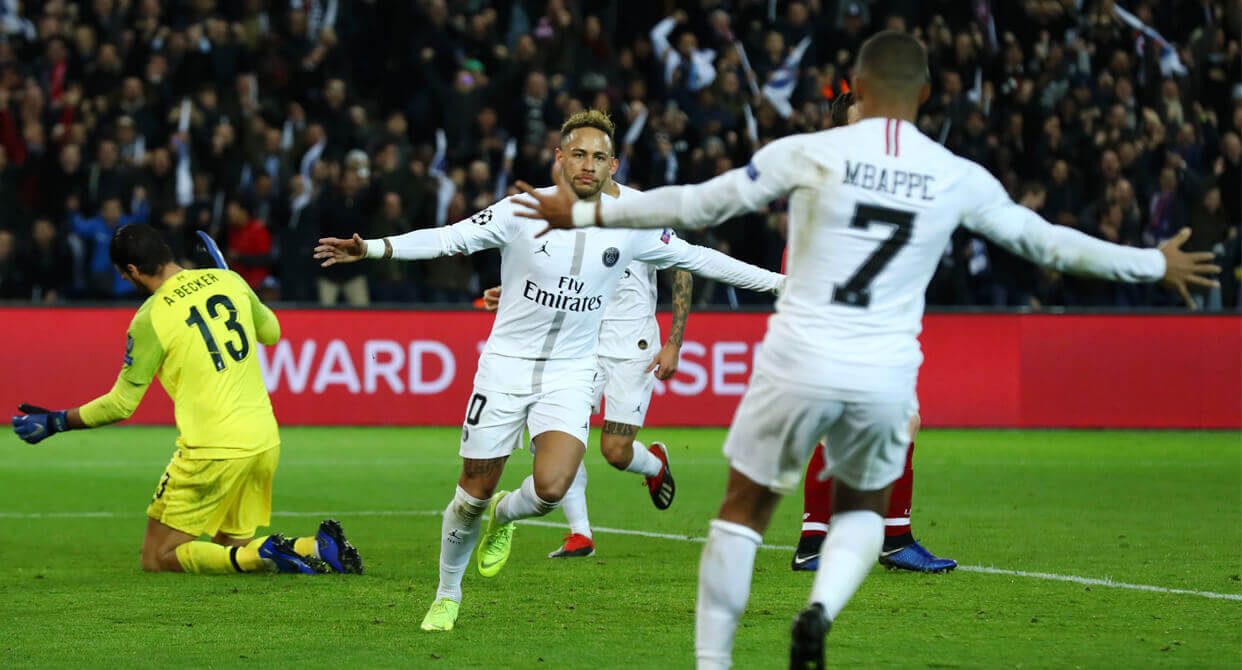 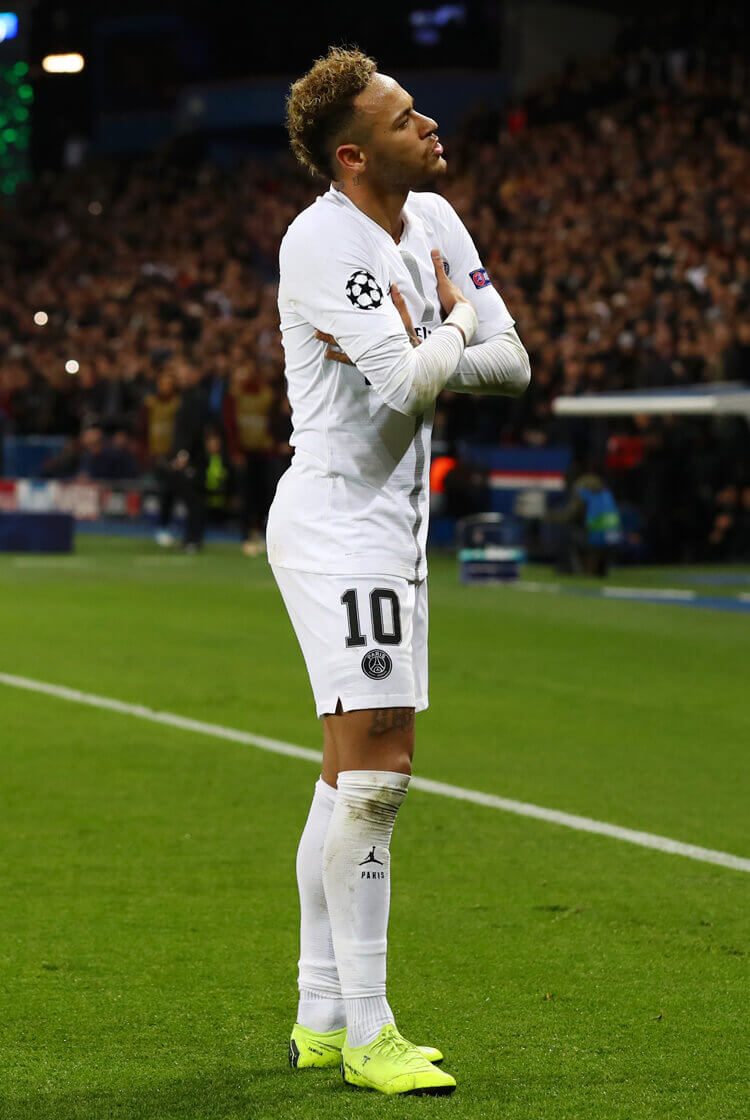 Liverpool’s Champions League hopes were left in the balance with this 2-1 defeat against the irresistible attacking force of PSG in Paris. Jurgen Klopp’s side struggled to cope with the combined threat of Neymar, Kylian Mbappe and Edinson Cavani in a first half the hosts dominated, and it was no surprise when Juan Bernat drove them in front in the first 15 minutes. Neymar eventually doubled the PSG lead, but while James Milner nervelessly pulled one back for the Reds from the penalty spot on the stroke of half-time, Liverpool never created enough to seriously threaten an equaliser. They must now defeat Napoli 1-0 or by two clear goals to qualify for the last 16. 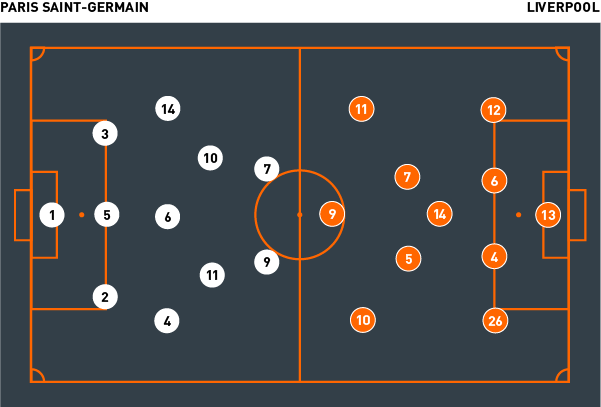 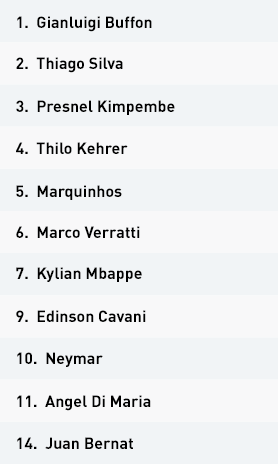 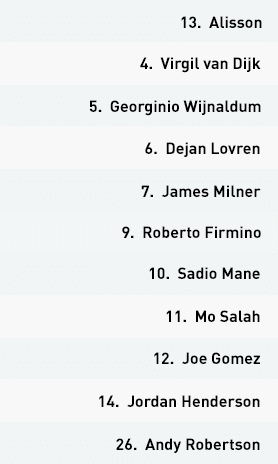 Thomas Tuchel set his Paris Saint-Germain team up in a 3-3-2-2 formation, with Neymar and Angel Di Maria playing off a front two of Kylian Mbappe and Edinson Cavani. The in-possession structure came about through Marquinhos dropping from his central-midfield role to a position in between centre-backs Presnel Kimpembe and Thiago Silva, forming a central back three that covered the middle of the pitch and two half-spaces.

The next line was provided by Thilo Kehrer and Juan Bernat in the wide areas, and Marco Verratti, who patrolled the middle in a position between the first and second lines of the Liverpool press. Neymar and Di Maria would then play on the next line, in the two half-spaces, with Cavani and Mbappe on the highest line.

Due to the spacing of the PSG back three, it was difficult for Liverpool to press and close down the passing lanes at the same time. The wing-backs would also provide an angle of support for the centre-back in possession, while Verratti operated in a role of positional superiority that would eliminate the Liverpool front three if he was found – which he often was. In essence, the hosts operated with a midfield of Verratti, Di Maria, Neymar, Bernat and Kehrer against Liverpool’s trio of Jordan Henderson, James Milner and Georginio Wijnaldum – the five against three meant PSG were able to progress without too much difficulty.

Another method the hosts found was to drop Neymar and Di Maria towards the ball and play into their feet. This would attract a Liverpool player to the ball, from where they could set the ball to Verratti, who could then play the next pass through to the two forwards or out wide to their wing-backs – a tactic that could be seen for PSG’s opening goal on the night, eventually scored by Bernat.

As PSG looked to close the game out in the second half, they saw less of the ball. By having Mbappe and Neymar in their front line, however, they still carried a threat on the counter-attack – this became their main source of offence in the latter stages.

Out of possession, PSG operated in a 4-4-2 mid-block. Kehrer and Bernat joined Kimpembe and Silva in the back four, while Neymar and Di Maria tucked in to form the midfield block alongside Marquinhos and Verratti in the centre. They allowed Virgil van Dijk and Dejan Lovren to have possession, with Mbappe and Cavani staying central and discouraging passes into Henderson. As the ball moved out to Joe Gomez or Andy Robertson at full-back, they would be closed down by the wide midfielder on that side, who would try to screen the pass into Liverpool’s wide forward at the same time. He would be supported by the nearest central midfielder, who would screen the pass inside, while the nearest centre forward would also come across in a bid to force the ball back where it came from.

If Liverpool positioned a central midfielder in a false full-back position, in order to move their full-backs higher, Neymar and Di Maria would hold their position and screen the pass to the full-back rather than go and press. Here, the roles of Verratti and Marquinhos were crucial; as Liverpool tried to build in wide areas, PSG’s two central midfielders would have to screen the passes inside but also cover any diagonal runs in behind the wide midfielder as Liverpool tried to progress. This helped keep the back four connected and reduce the space for Mo Salah and Sadio Mane.

When Liverpool did manage to bypass the PSG midfield out wide, the awareness and intensity of the midfielders to track and tackle back meant the visitors often struggled to maintain control of the ball in the next phase of their attack.

Jurgen Klopp set Liverpool up in a 4-3-3 formation in possession, with James Milner, Georginio Wijnaldum and Jordan Henderson in a midfield three operating behind Sadio Mane, Mo Salah and Roberto Firmino. Liverpool tried to build out from the back but came up against an organised 4-4-2 block. As PSG operated with two in their first line, Henderson would often drop between Dejan Lovren and Virgil van Dijk in order to push them wider and have a central build of three against two – this also allowed full-backs Joe Gomez and Andy Robertson to push higher up the pitch.

Liverpool looked to build their attacks in wide areas, which was largely where they found success in the game between the sides at Anfield earlier in the group stage. They used a variation of different methods to try to progress in these areas. One was to push one of the three central midfielders wide and have the full-back travel with the ball and look for him with a pass that eliminated the midfield line. Another was to drop a central midfielder into a false full-back role and push Robertson or Gomez higher to draw PSG out and create space in behind. Alternatively, they would drop Mane into a wide midfielder role and have the central midfielder on his side make a run in behind the space he had just vacated.

All of these methods were reasonably well dealt with by the hosts, however. The common theme throughout was that Liverpool were able to bypass the first line of PSG’s block fairly consistently, but very rarely managed to successfully move the ball into advanced areas that eliminated the second line. A single shot on target over 90 minutes – the penalty from which Milner pulled a goal back – was the result.


Out of possession, Liverpool pressed with the same 4-3-3 but struggled to deal with PSG’s movement and passes between the lines, not to mention their width. The Reds found more success when positioning their front line closer to the PSG defensive line as the hosts played out from the back. This high-intensity press would be backed up by the midfielders but, importantly, one of them – usually Henderson – would remain ball-side and deeper so he could intercept should PSG look to clip it forwards.

Where possible, Liverpool would try to trap PSG in wide areas with the near-side midfielder, forward and full-back. Due to PSG’s positioning of players across the pitch, however, this left large spaces for the hosts to progress their attack should the press be beaten. Liverpool never really came to terms with this in the first half, conceding the two goals that contributed to their defeat and leave them needing to beat Napoli at Anfield in their final group fixture.