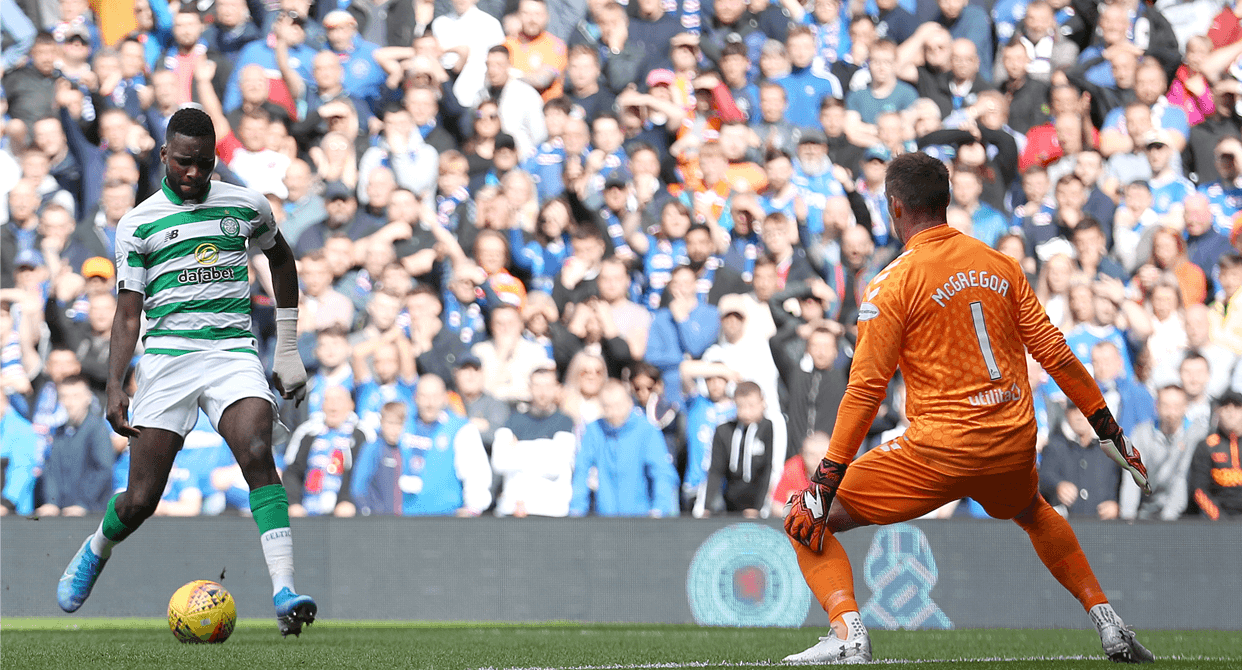 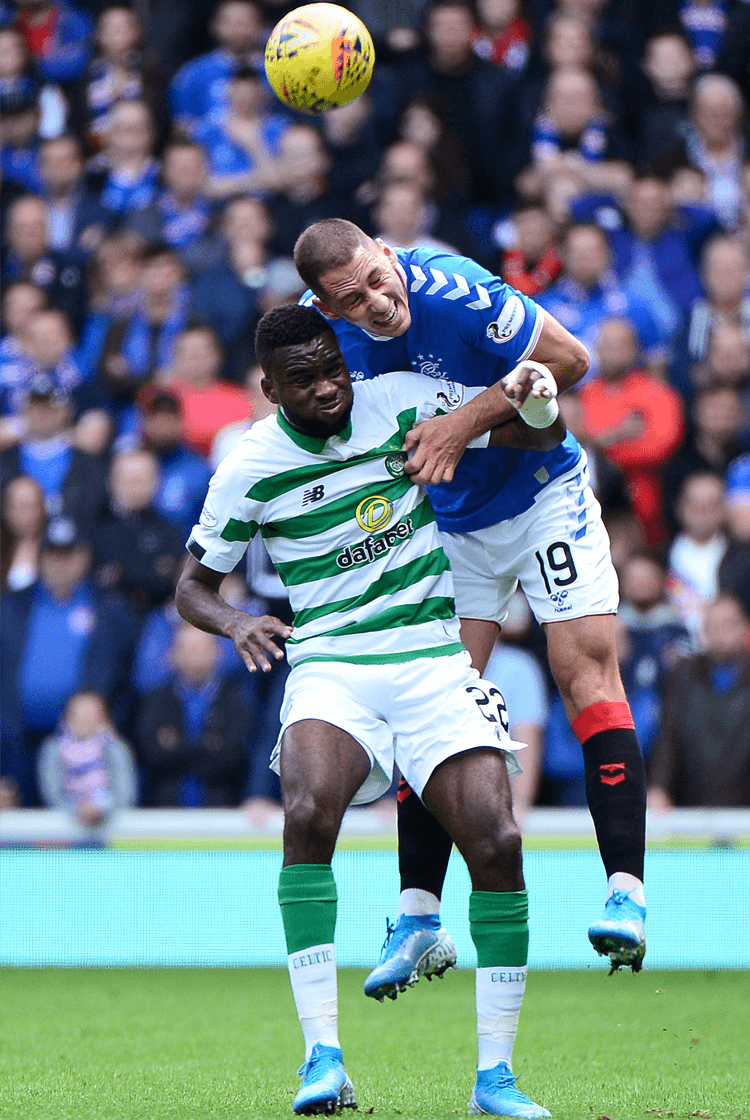 The first Old Firm derby of 2019/20, which is expected to provide the Scottish Premiership’s most competitive title race since Rangers’ relegation to the third tier in 2012, concluded in what could prove a significant victory for visitors Celtic. The Bhoys had lost on their past two visits to Ibrox, but they successfully ended Rangers’ 12-match unbeaten start to the campaign to move three points clear in first place at the top of the table. Odsonne Édouard scored his fifth goal in seven against Rangers when capitalising on Connor Goldson’s careless loss of possession in the first half. Having resisted pressure throughout the second, Celtic struck again in stoppage time, through substitute Jonny Hayes, to secure all three points. The hosts’ substitute Jordan Jones was sent off for a desperate challenge on Celtic replacement Moritz Bauer even later. 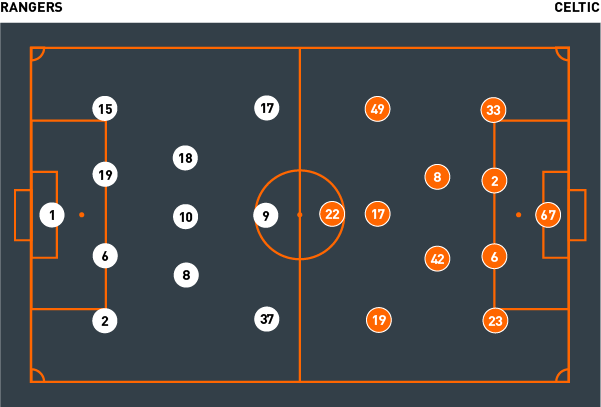 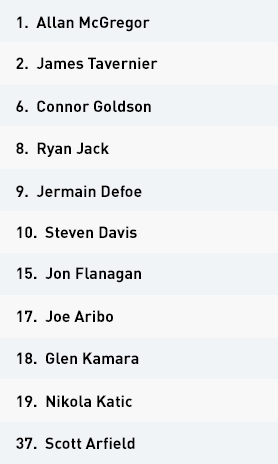 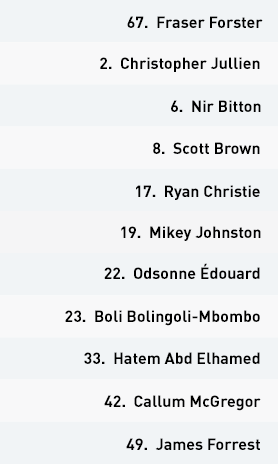 Steven Gerrard set his Rangers team up in a 4-3-3 formation led by lone striker Jermain Defoe. Their midfield three of Steven Davis, Ryan Jack and Glen Kamara initially operated in front of the Celtic midfield, offering shorter passing options during deeper build-up play – but they lacked the ability to penetrate in this way, so adopted a different approach in possession.

Scott Arfield had started on the right side of the front three, but he moved inside to exploit the increased spaces behind Celtic’s midfield, which had advanced towards the Rangers trio. Joe Aribo also started making penetrative runs from wide on the left to draw one central defender, leaving Defoe one-on-one against the other. On the occasions Arfield was found in an inside-right position, he connected well with his front runners, but this didn’t happen enough for him to pose a consistent threat. The former Burnley man’s presence between the lines offered the greatest attacking threat for the hosts, particularly as Aribo ultimately made fewer runs – which in turn left Defoe isolated against two central defenders.

After the visitors took the lead – from their first shot on target, after an individual error – Gerrard looked to advance full-backs James Tavernier and Jon Flanagan, while Arfield and Aribo switched sides. Rangers still lacked the final ball into their narrow forwards, however, and struggled to make enough penetrative movements away from possession after a regain.


Sheyi Ojo’s second-half introduction for Kamara led to Rangers dominating in another new structure. Davis and Jack moved into a double pivot during patient build-ups from the back, with Jack moving wider to encourage Tavernier further forward. Arfield remained in a more central role as a number 10, with Ojo providing width from the left. Left-back Flanagan was also eventually pushed forward.

Rangers maintained a high level of pressure as the second half progressed, limiting Celtic’s threat to isolated breakaways and set-pieces, but their recoveries quickly nullified those transitional attacks. When Alfredo Morelos replaced Defoe, he offered an immediate penetrative threat in behind; his direct runs drew the visitors’ defenders towards their own goal and contributed to an increase in Arfield’s creativity.

Using the width provided by their full-backs, Rangers were able to push multiple bodies into central lanes, but they struggled to combine with so many numbers in limited spaces. Ultimately they didn’t do enough to create an equaliser, with the defeat soured still further when Celtic scored again deep into stoppage time.

Neil Lennon set Celtic up in a 4-2-3-1 structure, built on the double pivot provided by Scott Brown and Callum McGregor. Their wingers James Forrest and Mikey Johnston started by advancing too high, so their defenders struggled to directly find them. As a result, with the Rangers front three blocking access into central midfield, number 10 Ryan Christie became a key outlet.

Rangers cut out the passing lane between Celtic’s wingers and full-backs, forcing them to be direct, but as their two advanced central midfielders pressured Brown and McGregor, Christie moved into the spaces around Rangers’ single pivot Steven Davis. The number 10 consequently received between the lines, and became the link between defence and attack. Johnston looked to make inside movements from the left, to attack the spaces to Davis’ right; with Christie drifting to that side too, Celtic were able to penetrate into the final third with two 10s and overlapping left-back Boli Bolingoli.

When Rangers pushed Scott Arfield inside from the right wing, Bolingoli’s freedom was restricted by Celtic’s desire to avoid risking a three-on-three in defence – so, while the spaces between their defence and midfield increased, their back four remained compact. As Christie became their focal point in attack, Brown behind him defended against transitions from midfield.

It was Celtic’s mid-block recovering possession after a poor pass that led to their opening goal – and the intensity of their press from what became a five-strong midfield negated Rangers’ first attempts to draw level. Steven Gerrard’s team struggled to play between the lines, and their crosses into the penalty area offered little when their presence inside it was often minimal.

Celtic were forced into a much lower block for the second half, as the visitors advanced both full-backs. Their double pivot withdrew further to block central spaces between the lines, contributing to Rangers’ attempts to build play out wide. Both Forrest and Johnston worked back into deeper territory to combat this, although that undermined Celtic’s transitional threat in wide areas. Lone striker Odsonne Édouard’s inconsistent hold-up play also ensured that the visitors lacked a more advanced outlet, even if he attempted to reduce pressure by winning corners, drawing fouls and pursuing ineffective clearances.

As a result, Celtic’s second-half approach was built on a compact defensive block and brief breaks forward. If they lost possession, their recoveries back were outstanding, and their wingers’ workrate prevented Rangers from committing numbers forward and creating two-on-ones in the final third. For all of the hosts’ pressure, it was a break deep into stoppage time that led to a second goal for Celtic, putting victory beyond doubt and securing a crucial advantage in their early pursuit of the title.