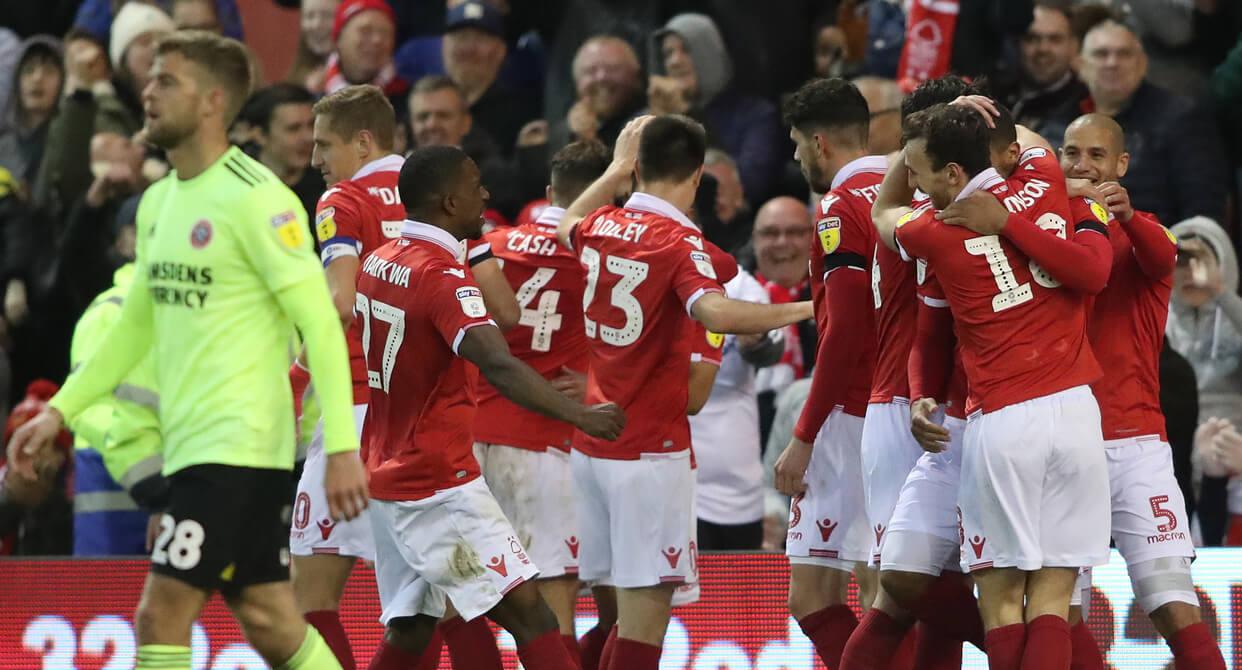 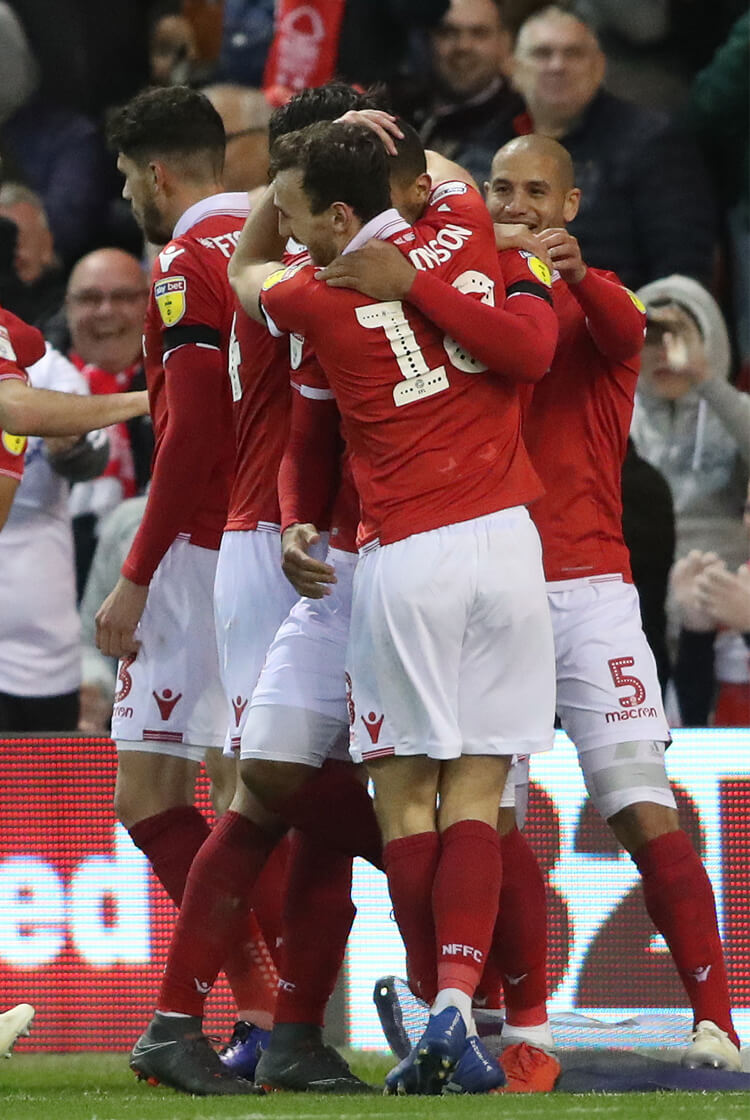 Sheffield United surrendered their position at the top of the EFL Championship with defeat to Nottingham Forest at the City Ground. Lewis Grabban was the match-winner, meeting the cross of Joao Carvalho in the 69th minute to net his ninth league goal of the campaign and seal the three points for the hosts. The Blades have dropped eight points from their last four domestic fixtures, with this defeat dropping them to third in the table. Leeds United and Norwich City now sit first and second, while Forest move menacingly into the top six. 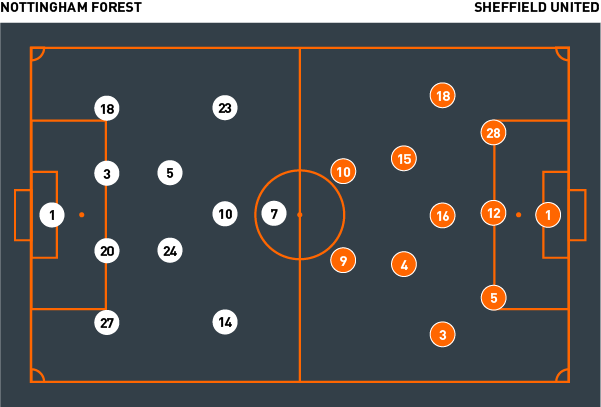 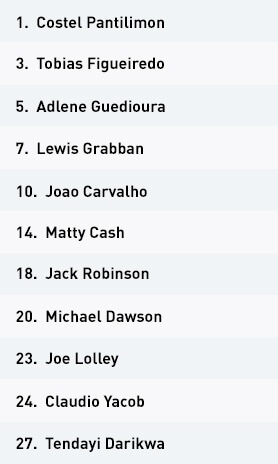 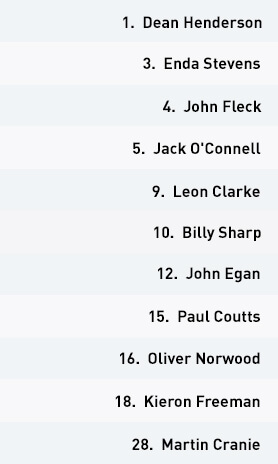 Forest looked to play through midfield and predominantly through Yacob, who would regularly position himself between the Sheffield United attack and midfield. There, he could receive the ball from Michael Dawson or Tobias Figueiredo before turning to play forwards.

From this area, Yacob would typically look to play direct to Grabban, who would often receive to feet before setting to one of his attacking midfielders if they were in front of him, or play it around the corner if they had run beyond him. The ball would then often find its way out to Lolley in a position to provide an early, low cross into the box.

In the second half, Carvalho could frequently be seen dropping between the lines, either side of United’s central midfield three – this created a problem for the nearest man in whether to move towards him, leaving potential space behind, or to protect the potentially dangerous pass but allow Carvalho to get on the ball.

Out of possession, Forest switched between a high press and a mid-block. When Forest opted for the high press, Carvalho would usually move to the top line with Grabban, where they would press the centre-backs and the goalkeeper. When utilising a mid-block, they would set up in a 4-2-3-1 or a 4-5-1 shape, depending on how deep the attacking midfielders moved.

Most concerning to the hosts was the width United had with their wing-backs, and the potential to switch play. They attempted to combat this by committing three players to the wide areas to press from the front, behind and the side. These players would be the attacking midfielder on that side, the full-back and the nearest central midfielder (either Guedioura or Yacob). With this, if United wanted to play a big switch from the wide area, they would have to play back inside first – at which point Forest could adjust and move across to cover more of the pitch.

Sheffield United set up in a 3-5-2 in possession, with Kieron Freeman, Paul Coutts, Oliver Norwood, John Fleck and Enda Stevens across the midfield. Leon Clarke partnered Billy Sharp in attack.

United looked to play a possession-based game and would try to bring the ball out with their centre-backs and into midfield. The primary strategy was to exploit the wide areas, where wing-backs Freeman and Stevens would theoretically pose a problem if their opponents’ attacking midfielders had difficulty in recovering with them.

They were content in playing a few passes on one side of the pitch to entice the Nottingham Forest players over, before looking to switch to the other side of the pitch and attack the numerically weaker flank. These switches would either take the form of a big diagonal from a deep central position or the wide area, or United would look to move the ball across the pitch between their individuals with shorter passes. The latter was carried out with the aim of pulling individuals towards the ball in central areas and opening up the potential for penetration.

Despite this strategy and the movement of the ball, United only registered two shots on target throughout the match. They struggled to play through Forest, only really succeeding in playing around them – even then, Forest were still in a good position to defend.

Out of possession, United began by pressing the hosts high up the pitch using Clarke and Sharp. Generally, the two forwards would press the Forest centre-backs, while the wing-backs would press the full-backs. This would leave the three centre-backs and three central midfielders to deal with Lewis Grabban and the three attacking midfielders. They also had to remain aware of Claudio Yacob and Adlene Guedioura operating from deeper positions.

The positioning of Yacob was initially problematic to their press. With Yacob playing in a deep position and the United midfielders reluctant to travel so far up the pitch and risk leaving more space behind, the visitors struggled to affect the Forest playmaker.

They adapted to this further on in the game, with one centre forward pressing the ball-carrier and the other screening the ball into Yacob, aiming to be in a position to press the other centre-back if he received the ball. When Forest played out wide, it would be the wing-back who would go to close the ball-carrier down – in these cases, the nearest central midfielder would move diagonally backwards to cover, preventing his teammate from being taken out of the game and guarding against the wide area being exploited.