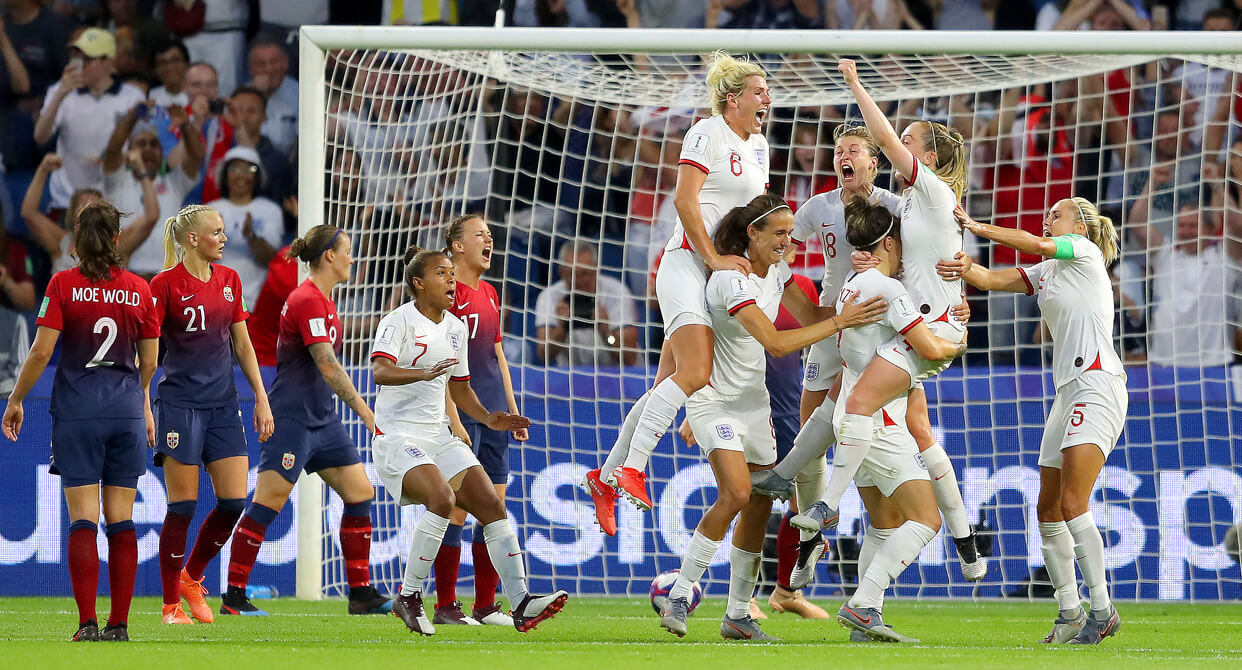 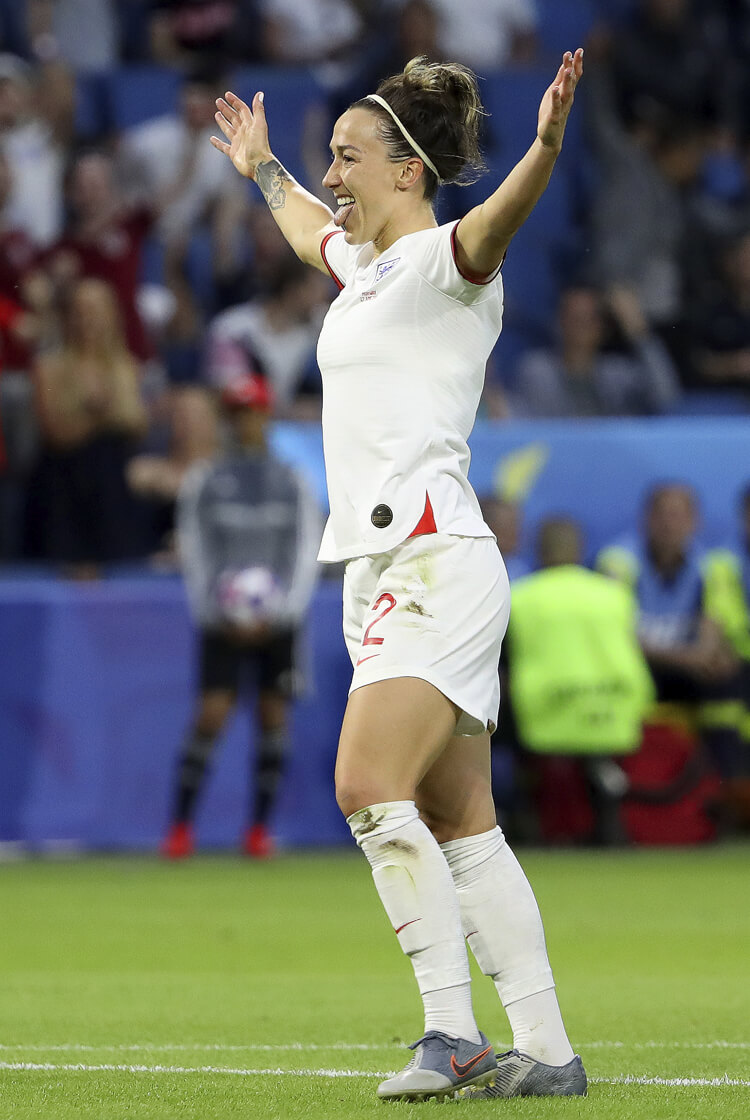 England reached their second straight FIFA Women's World Cup semi final with a resounding 3-0 victory over a supposedly dangerous Norway team in Le Havre. After coming through something of a war against Cameroon in the last 16, Phil Neville's side started on the front foot and were ahead within three minutes; in-form forward Ellen White failed to make any connection with a Lucy Bronze cross from the right, but Jill Scott behind her made no mistake, placing her finish wide of veteran Norway stopper Ingrid Hjelmseth. The Lionesses were the better team and doubled their lead just before half-time, when Nikita Parris squared for White – who had earlier hit the post with a rasping shot – to finish for her fifth of the tournament. The superb Bronze grabbed one for herself when taking advantage of some terrible Norway marking to hammer home from the edge of the area before the hour, after which the game was over as a contest. Not even a late penalty miss from Parris – her second from three at this World Cup – could take the edge off England's serene progress into a semi final against either France or the United States. 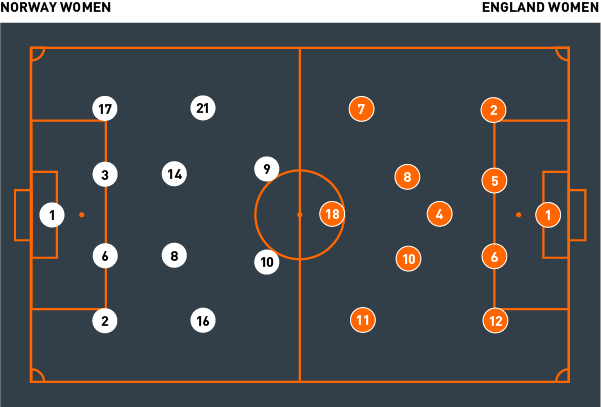 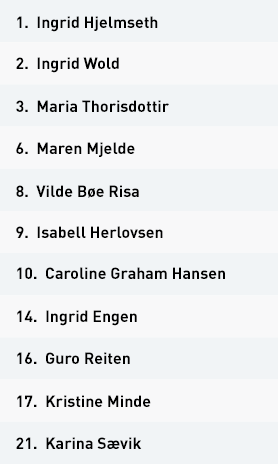 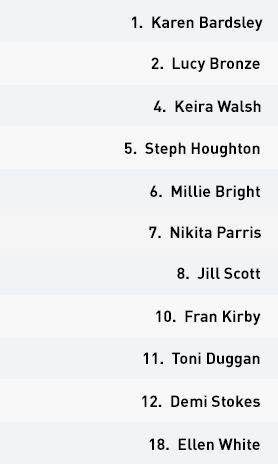 Norway initially set up in a 4-4-2 formation, with a front two of Isabell Herlovsen and Caroline Graham Hansen. The latter mostly looked for spaces between the lines, often utilising the right-sided half-space to find pockets between England’s midfield and back line.

In attack, their shape became more of a 2-4-2-2, with full-backs Ingrid Wold and Kristine Minde pushing high, and wingers Guro Reiten and Karina Saevik moving into the half-spaces. They looked to play out from under England’s high press and through the thirds, asking central midfielders Vilde Boe Risa and Ingrid Engen to drop deep and split the centre-backs – which served to nullify the press of Fran Kirby in the number 10 position. Risa in particular also dropped into a false full-back position on the right, allowing Wold to get higher earlier in the build-up and offer width outside the narrowing wide player.

In the middle, the dropping movements of Hansen enabled Norway to at times create a five-on-three overload against England’s midfield three. Main striker Herlovsen was then used to receive and drag centre-backs out of position, from where the Norwegians could look to use third-man runs from midfield to exploit any resulting space in behind.

Defensively, they set up with two compact lines of four behind a front two that animated into a 1-1 once the nearest forward had engaged a centre-back; the second forward then dropped in to deal with England’s deepest-lying midfielder, usually Keira Walsh. At times, however, England found it too easy to play through this defensive set-up; if Walsh utilised ball-side space rather than central areas, it reduced the far-side forward’s ability to drop in and mark.

Norway frequently had all 10 players back in their defensive third, but they were reguarly exposed in the half-spaces due to non-existent cover for their full-backs. The centre-backs prioritised dealing with crosses, while the midfield were not compact enough around the ball or quick enough to cover distances across the pitch. This space was frequently exploited by England, not least in the two first-half goals that took the game away from Norway.

England took to the field in their now familiar 4-3-3 shape, with Demi Stokes selected ahead of Alex Greenwood at left-back but both Steph Houghton and Millie Bright fit to start in the centre of defence. Phil Neville’s team looked to place an emphasis on use of the wide areas and half-spaces in possession, to try to break down Norway’s disciplined two banks of four.

The wide combination play of Nikita Parris and Lucy Bronze down England’s right proved particularly effective, with the pair working to vary who occupied the wide area and who took up residence in the half-space. This proved fruitful as early as the third minute, when goalkeeper Karen Bardsley played over the Norway press for central forward Ellen White; from there, White found Parris wide, who in turn played to Bronze in the half-space. The Lyon right-back drove infield, and her pull-back was swept home by an unmarked Jill Scott.

The Lionesses were repeatedly able to take advantage of the front-foot defensive approach adopted by the Norway full-backs, either utilising their wide players or by asking White to exploit the space in behind them. In the end, it was from such a move that England scored their second – Parris was played in behind left-back Kristine Minde in the half-space, and was able to square for White to score her fifth goal of an excellent tournament.

As the game developed, England’s use of the half-space actually increased; they looked to get more numbers into these areas, to take advantage of Norway’s lack of cover for their full-backs. Despite creating a number of further chances as their opponents chased the game, it was actually through a simple set-piece that they grabbed their contest-ending third. The Lionesses had already looked to play to Bronze to shoot from distance a couple of times to little effect, but Norway failed to heed the warning and Bronze duly hammered Beth Mead’s square ball past a helpess Ingrid Hjelmseth.

Out of possession, England had to subdue a central overload for Norway, so chose to adopt a high-pressing 4-2-3-1 shape in the opposition half, with Jill Scott dropping alongside Keira Walsh at the base of the midfield. This then filtered into a 4-4-1-1 in their defensive third, with Parris and Duggan dropping into a flat midfield four and Kirby assisting White on the top line.

The midfield four remained compact in this situation, specifically to deal with the fact Norway’s wingers were operating so narrow. This also meant that England’s back four stayed very compact, to provide immediate cover and deal with any midfield third-man runs of Norway once a centre-back had committed to pressing Herlovsen. In the end, though, a fourth consecutive clean sheet contributed to a comfortable victory that saw the Lionesses into a World Cup semi final to match the men’s team of 12 months ago. They may yet go one step further.