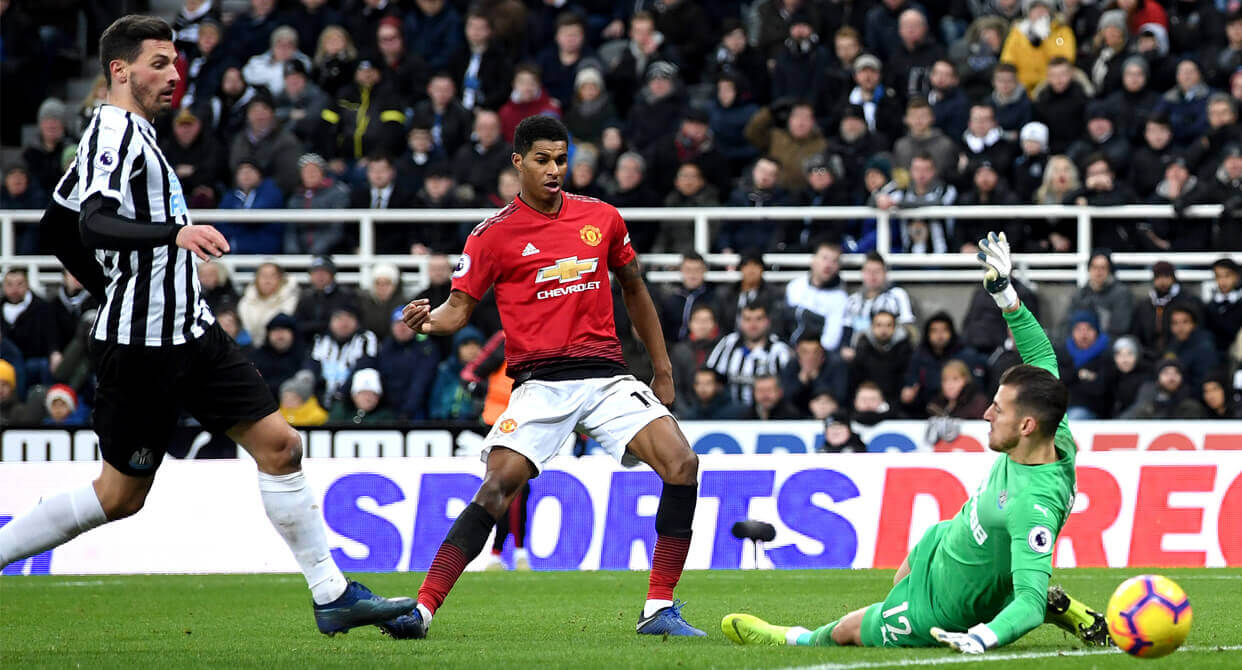 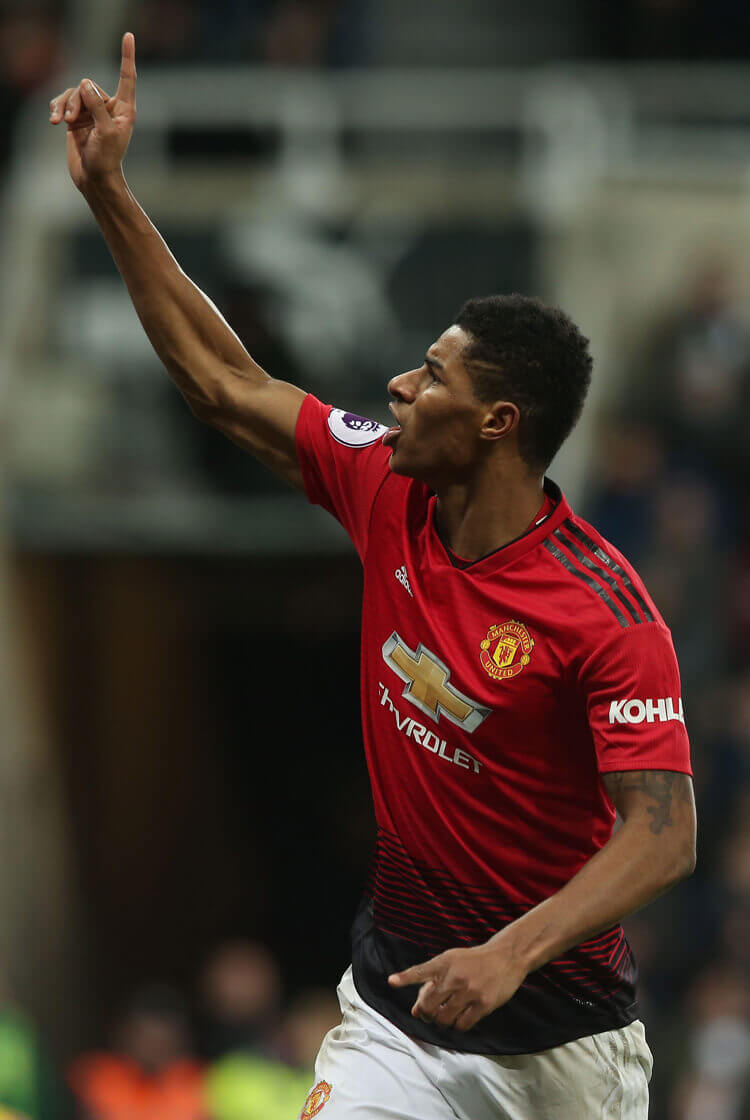 Ole Gunnar Solskjaer became only the second manager in Manchester United history to win his first four league games, emulating Sir Matt Busby with an ultimately comfortable 2-0 win at St James’ Park. After a goalless first hour in which both sides created chances without looking overly dangerous, Solskjaer turned to his bench – and the golden touch he has so far exhibited in his short reign was in evidence once more. First, Romelu Lukaku pounced to score with his first touch after Martin Dubravka had spilled a Marcus Rashford free-kick from distance; then, 15 minutes later, Alexis Sanchez was the provider for Rashford to score his third goal in four games since Solskjaer arrived at the club, and secure the points that take Manchester United within six points of fourth-placed Chelsea. Newcastle lacked the quality to get back into the game, and were lucky to keep 11 men on the pitch when substitute Jonjo Shelvey raked his studs down the back of Paul Pogba’s calf soon after his introduction. 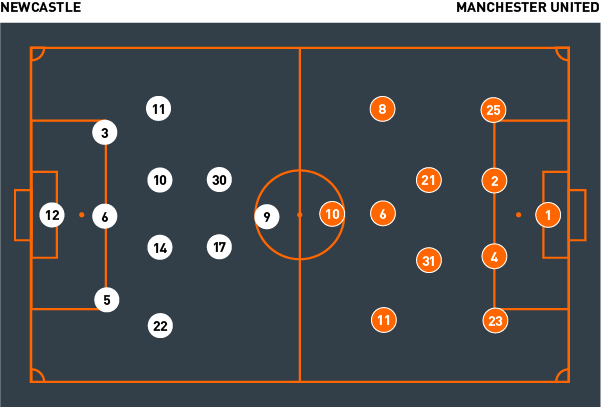 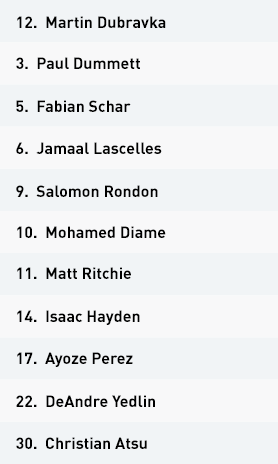 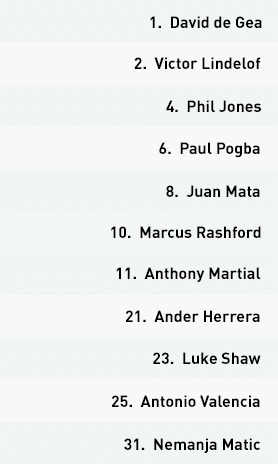 Rafa Benitez set his Newcastle team up with a back three in possession, with a box midfield in front of them and wing-backs DeAndre Yedlin and Matt Ritchie pushing up to provide attacking width. The box was formed of Mo Diame and Isaac Hayden in the deeper positions, with Christian Atsu and Ayoze Perez in the more advanced roles, while Salomon Rondon led the line.

The hosts conceded possession for the majority of the game, and would try to play to Rondon’s strengths upon regaining the ball. Initially, they looked to send it forward early and in behind the Man Utd defence for the powerful forward to chase down – but playing passes early meant he had limited support if he did manage to latch on to them. Alternatively, Newcastle played direct to Rondon for him to hold the ball up and bring others into play; typically, Atsu and Perez would look to run beyond him to receive flick-ons, while Yedlin and Ritchie would push up wide and be available to cross into the box. A third strategy was to look to wide combinations of Ritchie and Atsu on the left, or Yedlin and Perez on the right, to work crosses for Rondon and any late runners in the box.

The introduction of Jonjo Shelvey in the second half gave Newcastle greater accuracy with their long, forward passes, and indeed more complex passes through the opposition units. These became more necessary as Newcastle chased the game, although they ultimately fell short in the final third and gave Ole Gunnar Solskjaer his first clean sheet as Man Utd manager.

Out of possession, Newcastle used a 5-4-1 structure, with Ritchie and Yedlin tucking in alongside Fabian Schar, captain Jamaal Lascelles and Paul Dummett to form the back five. Atsu and Perez joined Diame and Hayden in the second line.

The hosts utilised a mid-block strategy and would look to force Manchester United out wide. Rondon rarely pressed the visiting centre-backs; there would only be an increase in the level of pressure, usually triggered by the movements of Atsu and Perez, when the ball went into full-backs Luke Shaw or Antonio Valencia.

Newcastle altered their positional strategy slightly in response to their opponents’, with Juan Mata playing inside from the right and Valencia reluctant to push high behind him. Atsu was thus able to move up and inside to play closer to Rondon out of possession, while Ritchie pushed up into more of a left-midfield role in an attempt to affect Valencia should he receive the ball.

In the latter stages, Newcastle pressed higher as they chased the game. Substitute Kenedy, Shelvey and Atsu would support Rondon in trying to win the ball as near to the Man Utd goal as possible, or at least trying to force the visiting defenders into mistakes in possession. For all their hard work, though, they never really looked like getting the better of their opponents.

Ole Gunnar Solskjaer set his Manchester United team up in a 4-2-3-1 structure, with Ander Herrera and Nemanja Matic as the two deeper-lying midfielders behind Anthony Martial, Paul Pogba and Juan Mata, and Marcus Rashford as the lone central striker.

The visitors tried to get Rashford in a race with left-sided centre-back Paul Dummett on a regular basis in the first half. The forward tended to start his run from a central position and curve it between Dummett and wing-back Matt Ritchie, which would then trigger the forward runs of Mata, Pogba and Martial. Mata played on the right of the attacking three behind Rashford, but he regularly came deep to receive the ball and moved inside to a more central attacking position.

This provided United with more presence centrally but a lack of width on one side, as Antonio Valencia was inconsistent in his forward movements from right-back. With both Matic and Herrera providing cover in midfield, and centre-backs Phil Jones and Victor Lindelof behind them, Valencia could have been much more adventurous and stretched Newcastle in defence, while also providing an option for the switch.

While Mata moved inside from the right, Martial would often stay wide on the left, and look to receive to feet or through making an out-in movement to receive behind Yedlin. There were also several combinations between Mata, Pogba, Martial and Rashford due to them playing on different horizontal lines and pulling Newcastle defenders out of their structure.

Due to the lack of numbers on the right, Man Utd based most of their attacks down the left, with the quartet of Luke Shaw, Matic, Pogba and Martial trying to combine to break Newcastle down. The hosts responded by packing the area, however, so the visitors had limited success. Their width improved when Rashford moved out to the right, with substitutes Alexis Sanchez introduced on the left and Romelu Lukaku up front, with Pogba just behind. This stretched Newcastle out more and created more spaces through which Solskjaer’s men could attack in the latter stages.

Out of possession, the visitors used a 4-2-3-1 structure and would try to press Newcastle high up the pitch. This was a man-oriented press, with Mata closing down Dummett and Valencia pushing up to press Matt Ritchie on the Newcastle left, while Rashford marked Jamaal Lascelles and Pogba locked on to Mo Diame in the centre. On the Newcastle right, Martial took care of Fabian Schar and Shaw likewise on DeAndre Yedlin, while Pogba would then look to Isaac Hayden in central areas. Matic and Herrera looked to affect Newcastle’s higher midfielders, leaving the centre-backs to deal with the not insubstantial presence of Salomon Rondon.

The hosts did manage to break this structure at times during the contest, but this was a much better defensive display than we have seen from Man Utd on many occasions this season – a first clean sheet will have delighted Solskjaer as he looks to put more pressure on the teams above them in the table.