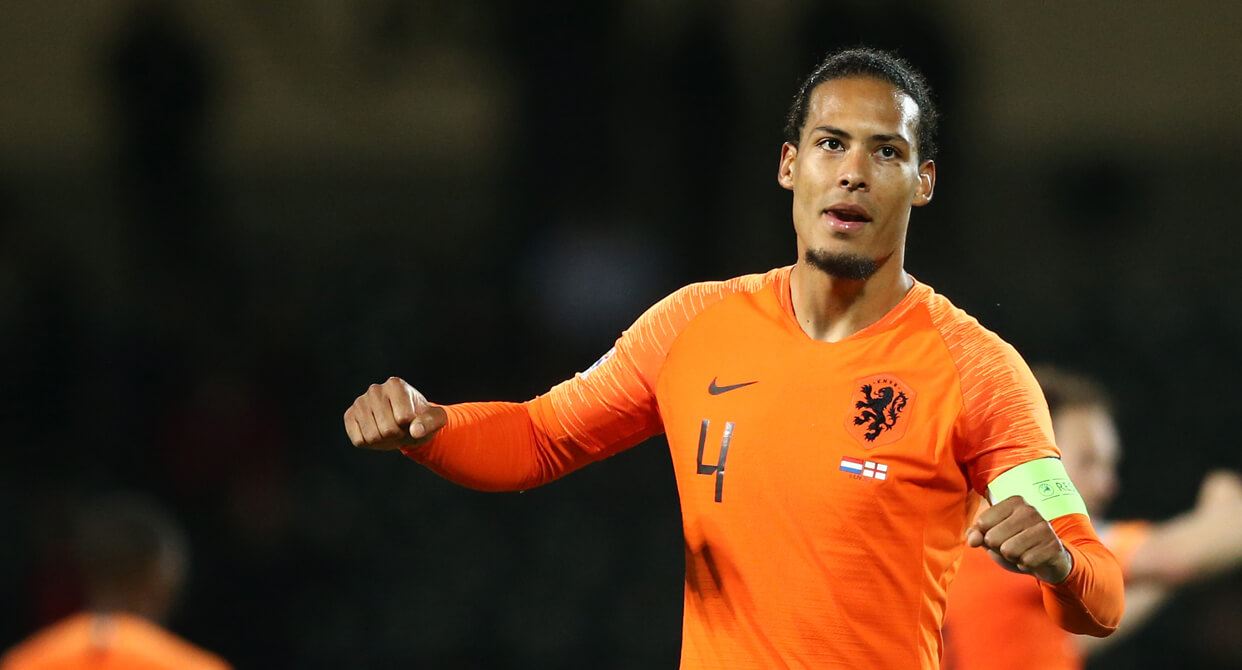 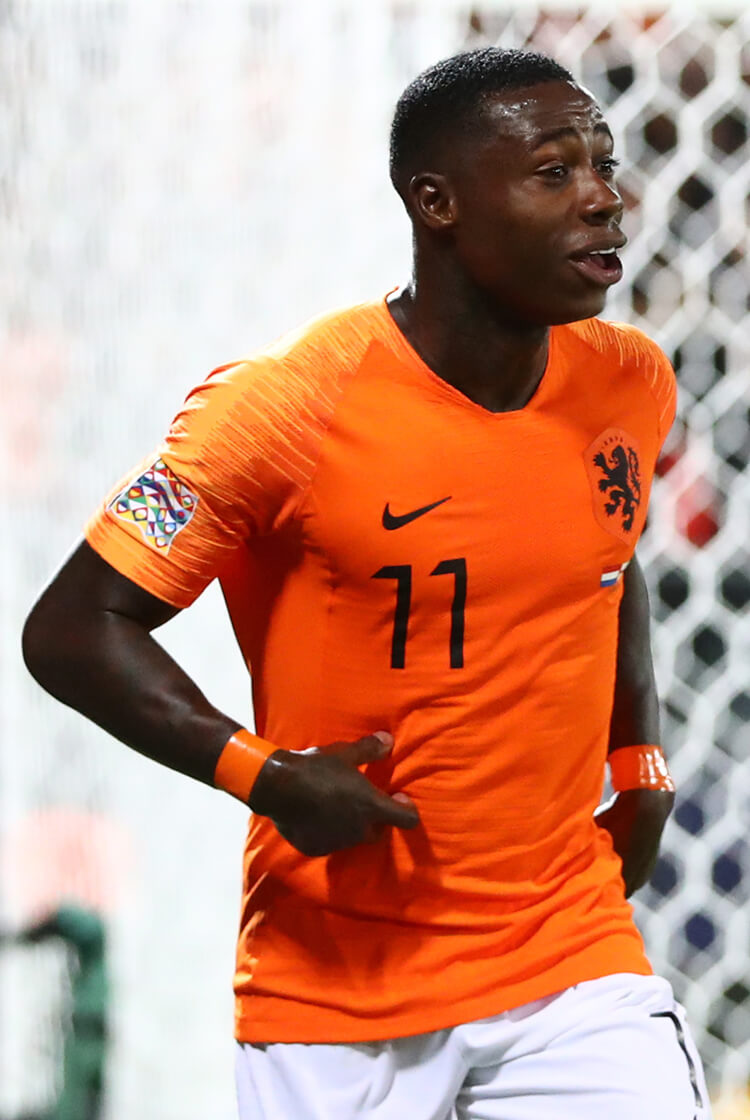 The England men’s team suffered their second semi-final defeat in a year, as their first Nations League campaign ended in extra-time disappointment against an impressive Netherlands side in Guimaraes. Gareth Southgate’s men struggled to impose themselves from the start, but took a surprise lead just past the half-hour when Marcus Rashford capitalised on a Matthijs de Ligt error to win a penalty he himself converted. The Manchester United forward was replaced by Harry Kane at half-time, but the Dutch continued to dominate and eventually had their reward when de Ligt escaped the attentions of John Stones to power home a header with less than 20 minutes remaining. Stones then endured a torrid extra-time, being caught in possession in the move that led to a Kyle Walker own goal, before playing Ross Barkley into trouble as Quincy Promes eventually stroked home into an empty net for the Dutch’s contest-ending third. 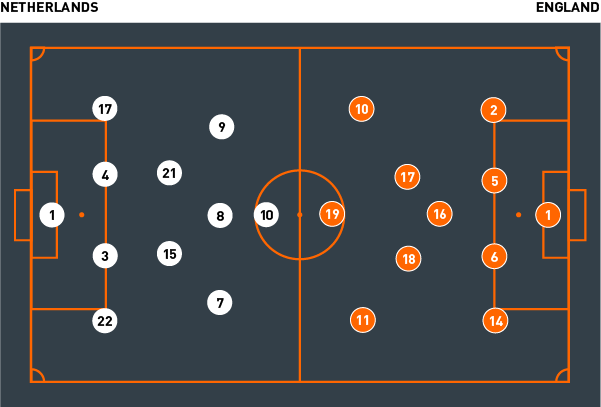 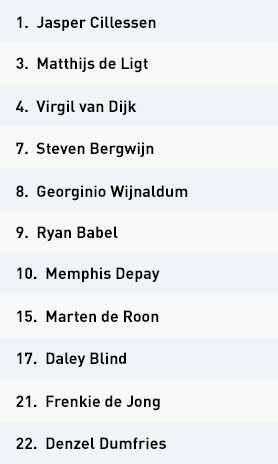 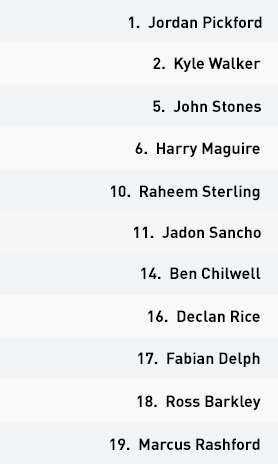 The Dutch concentrated their build through de Jong and de Roon, and would often look to find them beyond the first line of England’s press. They positioned the two deep midfielders here so that they could entice the England midfielders – Ross Barkley, Declan Rice or Fabian Delph – towards them and create space between the lines for the next pass. The two midfielders also dropped into false full-back roles, which would allow Denzel Dumfries or Daley Blind – or both – to push up into advanced areas on the flanks, creating opportunities for Babel and Bergwijn to move inside and play alongside Depay in a narrower front three. This caused problems for England’s defensive line – did they move with the attackers or hold their shape?

By moving the wide attackers inside and pushing the full-backs high, the Netherlands looked to try and create two-on-one situations against England’s full-backs, from where they could create crossing opportunities. Depay also looked to threaten in behind, making several runs beyond the England defence to stretch them vertically and create more space in between the lines for the attacking midfielders. The Netherlands also looked threatening on the counter-attack, particularly in the space left behind the advancing England full-backs.


Out of possession, the Netherlands initially set up in a 4-2-3-1, with Depay looking to lead the press against England’s centre-backs. Bergwijn pressed Ben Chilwell and Babel shut down Kyle Walker, while Wijnaldum, de Jong and de Roon took responsibility for England’s midfield three. This made it extremely difficult for England to play through the central areas, and often forced them to play backwards. This in turn acted as a trigger for the Dutch to continue their press higher up the pitch in an attempt to force mistakes – which they managed to devastating effect in the build-up to their second and third goals.

The man-oriented press of the Dutch midfield might have created space in the middle for England to play through, but the England midfielders’ lack of movement throughout made the Netherlands’ job much easier. Further back, Van Dijk was happy to drop as far as Marcus Rashford – and later Harry Kane – chose to go, while Dumfries and Blind were comfortable tracking Jadon Sancho and Raheem Sterling inside and dealing with them one on one. Towards the end of the game, the Netherlands retreated into a 4-4-2 or 4-5-1 structure and looked to frustrate an England side that found it very difficult to break them down.

Gareth Southgate set England up in a 4-3-3 shape in possession; Declan Rice, Fabian Delph and Ross Barkley operated as the midfield three behind central striker Marcus Rashford and wide attackers Raheem Sterling and Jadon Sancho. England tried to play their possession-oriented game, but had significant difficulty in playing through the Dutch midfield’s man-oriented defensive approach. A lack of movement and rotation in midfield meant that the most viable outlet to progress the build was through the full-backs, with Ben Chilwell on the left advancing more than the more reserved Kyle Walker, with the result that it often looked like England were building with a back three. Chilwell combined well with Sancho down the England left, where Dutch right-back Denzel Dumfries endured a difficult evening.

A goal ahead at the break through a Rashford penalty, England eventually switched to a 4-4-2 in the second half. Sterling joined Harry Kane – on for Rashford – as a second striker, although he had freedom to roam and drop into pockets to try and receive the ball unmarked. Jesse Lingard replaced Sancho and took up a position on the right side of midfield, but he would often make diagonal runs inside and beyond the Dutch defensive line – as seen for his disallowed goal late in the game.

The 4-4-2 was not entirely conventional, however, with Barkley often moving inside from the left and playing like an attacking midfielder in the half-space, and Chilwell offering the threat out wide. Overall, though, England had difficulty breaking down an organised Dutch structure and were forced into poor individual errors by an aggressive Netherlands press.

Out of possession, England mostly operated in a 4-1-4-1 mid-block, with Sancho and Sterling tucking in alongside Barkley and Delph to form a midfield line of four ahead of Rice and behind Rashford. Their press was hesitant, however, and lacked co-ordination. When Rashford went to press Virgil van Dijk and Matthijs de Ligt, he was easily bypassed. Barkley seemed hesitant to join Rashford in the press, and with de Jong and de Roon dropping in to receive it was easy for the Netherlands to play out and through England.

Problems also arose if Sancho or Sterling went to join the striker in the press, as this would open up passing lines to the full-backs, who could then advance freely as Chilwell and Walker were occupied by the Dutch attacking players. The switch to a 4-4-2 shape made it somewhat more manageable to control de Jong and de Roon, although the flat lines of the units did allow the Netherlands to play between the lines more. England had difficulty dealing with these movements, as they ended this Nations League semi final well beaten.