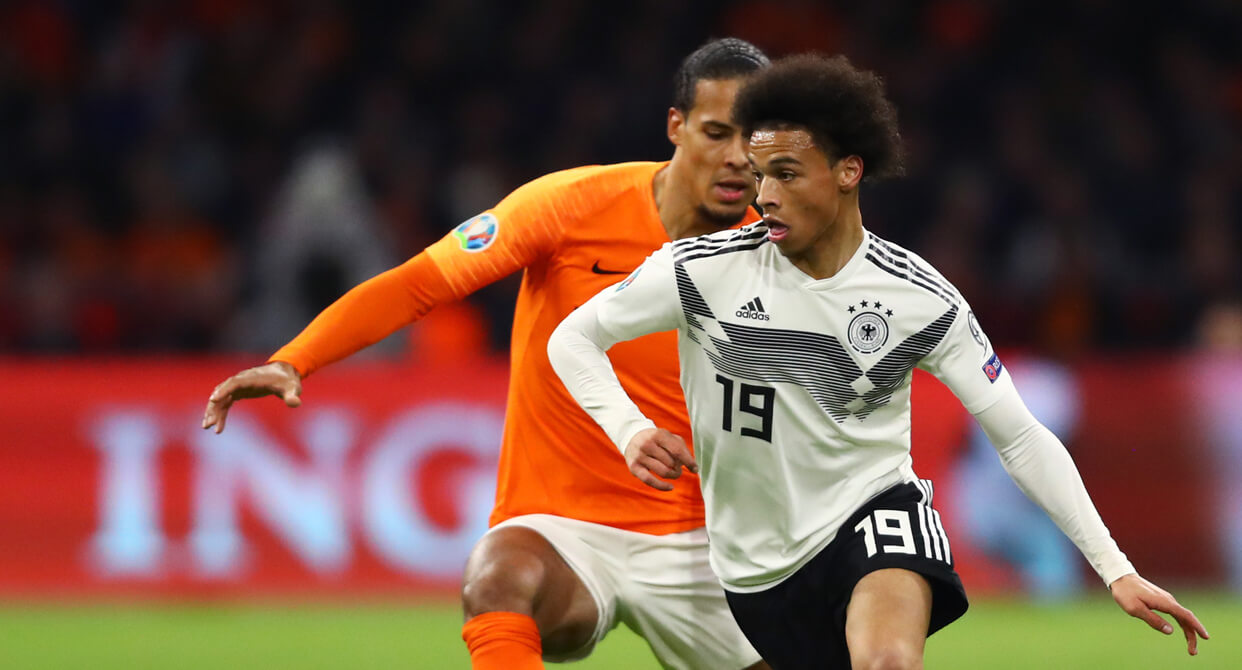 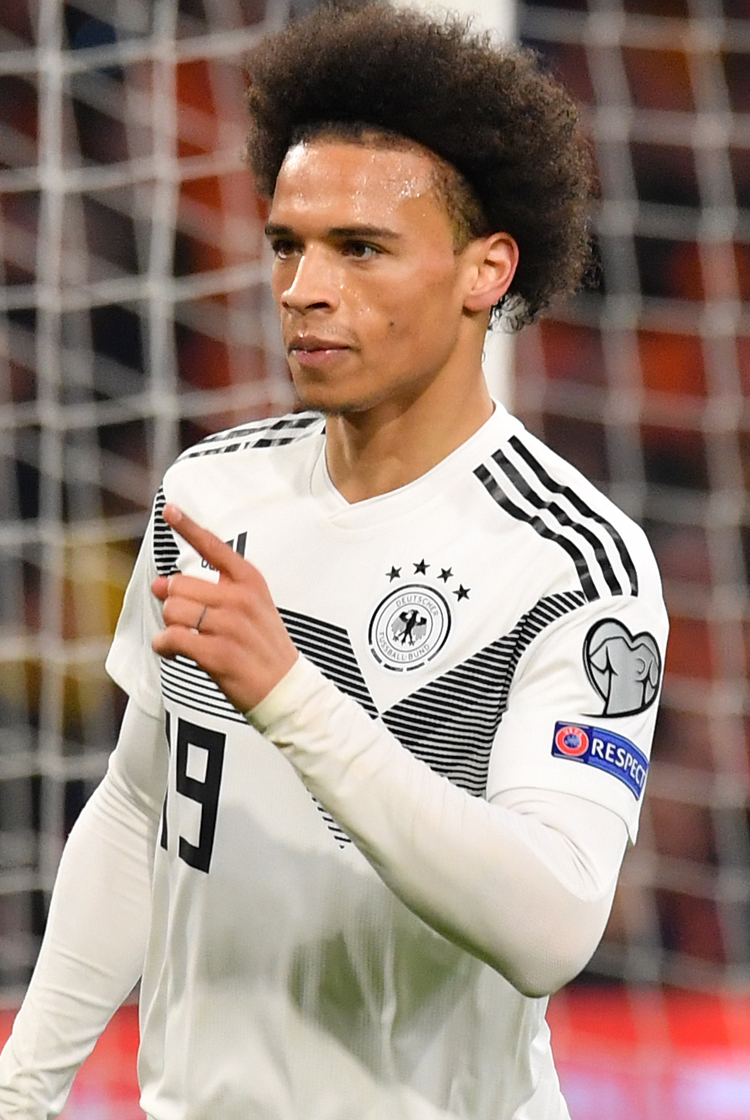 Germany got their Euro 2020 qualifying campaign off to a winning start away in the Netherlands, although they needed a last-minute Nico Schulz strike to secure the three points after throwing away a two-goal lead at half-time. Joachim Low’s team were among the Dutch’s Nations League group victims in the back end of 2018, but they looked well on the way to a form of revenge when goals from Leroy Sane and Serge Gnabry saw them in control at the break. Ronald Koeman shifted formation for the second half, and when Memphis Depay followed up Matthijs de Ligt’s header to draw the Netherlands level with half an hour to go, momentum looked to be with the hosts. They couldn’t find a winner, however, and succumbed to Schulz’s late effort. Germany now sit second in the group, three points behind Northern Ireland but with a game in hand. 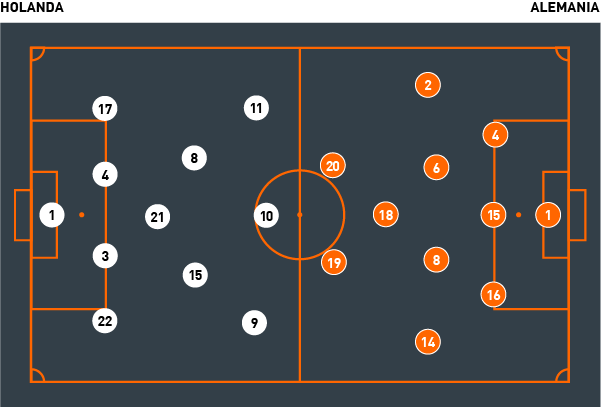 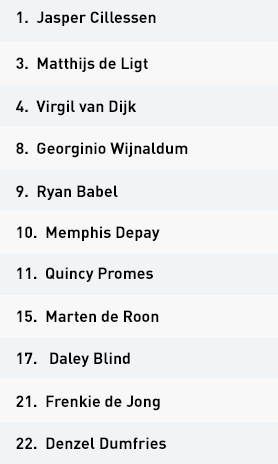 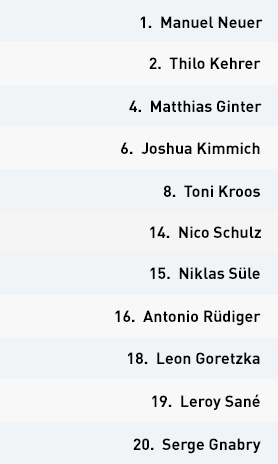 Ronald Koeman set his Netherlands team up in a 4-3-3 formation that swiftly converted into a 4-2-3-1 shape in possession. Marten de Roon dropped back to join Frenkie de Jong in a double pivot, inviting right-back Denzel Dumfries higher in attack – perhaps to force Germany left wing-back Nico Schulz, a key threat for the visitors, deeper in defence. Memphis Depay operated as the central striker, with Ryan Babel and Quincy Promes supporting from wide.

Whenever the double pivot of de Roon and de Jong drew the German front line higher, the hosts took advantage of increased spaces between the lines. Their first major chance was created as a direct pass into the front line exploited the lack of compactness between Germany’s units. Thilo Kehrer then failed to cover in behind right centre-back Matthias Ginter, with Manuel Neuer forced into a smart low save from Babel.

The Netherlands soon reverted to their starting 4-3-3 shape, with de Jong as a single pivot. Diagonal runs from de Roon and Georginio Wijnaldum served to pull Toni Kroos and Joshua Kimmich from the central lane. From here, the hosts could link with Depay, while runs from Babel and Promes stretched the wider German centre-backs. The deeper positioning of full-backs Dumfries and Daley Blind tempted Germany’s wing-backs higher, which created a disconnect in Germany’s back five and enabled the hosts – by now 2-0 down – to end the first half strongly.

Koeman shifted to a back three for the second half and immediately struck back when one of those, Matthijs de Ligt, rose to head home a Depay cross. The back three were expansive in possession, with Daley Blind in particular providing width on the left. This allowed for quick switches across the back line, targeting the spaces around Germany’s narrow first and second lines of pressure – and it was from one such switch to Promes on the left that the Netherlands eventually grabbed an equaliser through Depay. They failed to capitalise on the shift in momentum, however, and struggled to create any further clear-cut chances in the remaining half-hour.

Out of possession, the Netherlands’ front three actively looked to put pressure on Germany’s short build-up play, man-marking the visitors’ back three. Wijnaldum and de Roon also pushed high on to Germany’s double pivot of Kroos and Kimmich, while de Jong took care of Leon Goretzka.

Despite matching the visitors man for man, the hosts struggled with Germany’s rotations. The visitors alternated which member of the front line would drop into central midfield and thus link play around de Jong. Passing combinations after linking with the dropping forward allowed the visitors to drag their opponents out of shape and build through the Netherlands lines, as seen in the space created for Leroy Sane to score the opener.

As the hosts pushed higher in search of a swift response, they only succeeded in leaving more space in behind their back line. Runs from both Sane and Serge Gnabry were able to penetrate the Dutch back line, with the latter getting in to smash a superb second past Jasper Cillessen.

In the second half, Germany looked to exploit the Netherlands right during moments of transition, with Sane a key target in behind de Ligt. Deliveries into him were largely inaccurate, however, which only led to further Dutch possession. They will have been hugely disappointed to fall to such a late German winner, then, with Schulz striking low with time running out.

Joachim Low set his Germany up in a 3-4-1-2 formation, with Leroy Sane, Serge Gnabry and Leon Goretzka rotating fluidly within their front line. As the Netherlands adopted a man-marking strategy, any time Sane or Gnabry dropped into the number 10 position, they would drag a central defender with them and thus create a gap to exploit.

Additional supporting runs forward from players such as Toni Kroos, Thilo Kehrer and Nico Schulz would later exploit these gaps, including in the move that led to the visitors’ opening goal. Gnabry dropped, pulling Virgil van Dijk away from the back line; by the time the ball found its way to left wing-back Schulz, Sane took advantage of van Dijk’s absence and a slip from Matthijs de Ligt to blast home past Jasper Cillessen.

Kehrer and Schulz dropped deeper as the Netherlands pressed for a quick equaliser, leaving the diminutive front trio of Sane, Gnabry and Goretzka isolated against the Dutch defence. Germany responded by looking for direct balls into the increased spaces behind the hosts’ back line for the speedy Sane and Gnabry to chase. It was the latter who made the most of this, collecting a long ball from Antonio Rudiger and cutting inside van Dijk before unleashing an unstoppable shot into the far corner to double his side’s lead.

With the hosts changing their shape for the second period, Sane took up a more permanent role on the left of the front line. From here, the Manchester City attacker was a threat in behind de Ligt, both during open play and during moments of transition. However, most of the balls into both him and the still-dangerous Gnabry lacked accuracy – and in the end it was a late strike from Schulz that won the game for the visitors, who had regained an element of control once Ilkay Gundogan was introduced in a slightly revised 3-5-2 formation.

When the Netherlands did manage to play through Germany’s mid-block, the distances between the Kroos-Kimmich pivot and their forward trio proved too great. This increased space provided Georginio Wijnaldum, and occasionally the dropping central forward Memphis Depay, more space to receive and turn.

When the Netherlands converted into a 4-3-3 with deeper full-backs, both Schulz and Kehrer pushed higher and became detached from their back line. Diagonal movements from Wijnaldum and Marten de Roon also dragged Kroos and Kimmich away from the central defence, further enhancing the gaps between Germany’s units. This coincided with the hosts’ best spell of attacking football, although Manuel Neuer was equal to anything coming his way in the first half.

The Netherlands halved the deficit minutes into the second period, as Germany failed to deal with the second phase after a routine corner. The hosts’ change to match Germany’s set-up proved problematic for the 2014 world champions, with their attacking penetrations limited – and they looked to have lost further momentum when Depay struck an equaliser with just under half an hour to go. Schulz’s late winner came to the rescue, however, as Germany started their Euro 2020 qualifying campaign with victory away at their biggest rivals.