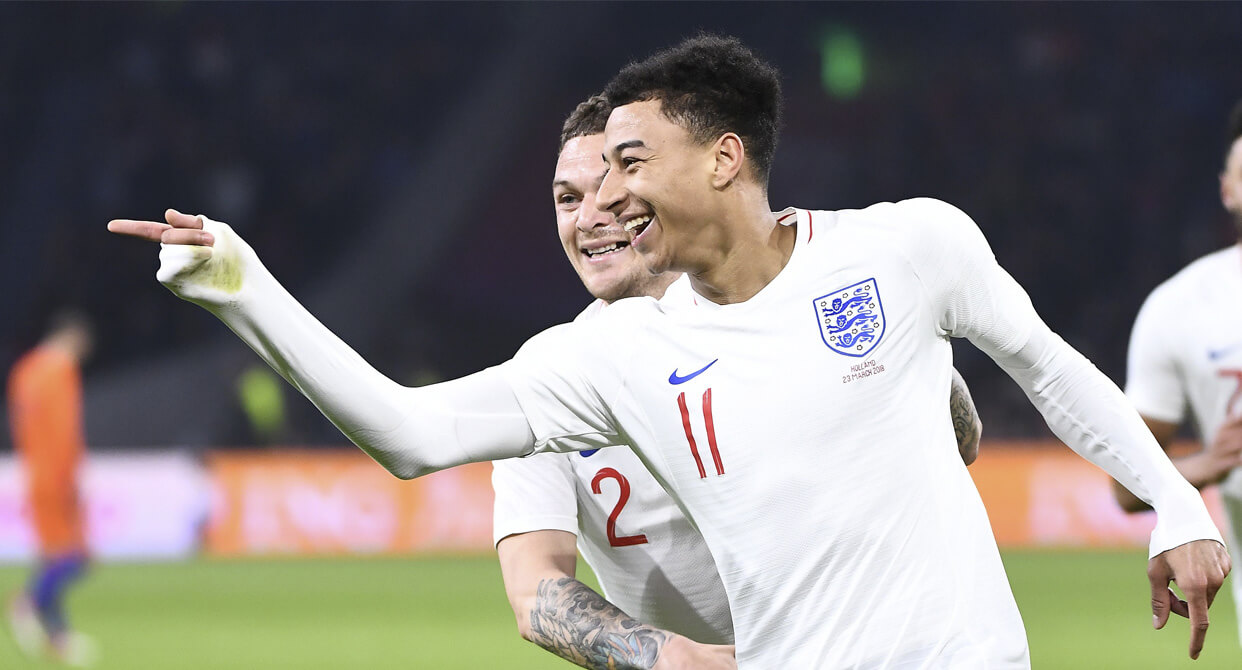 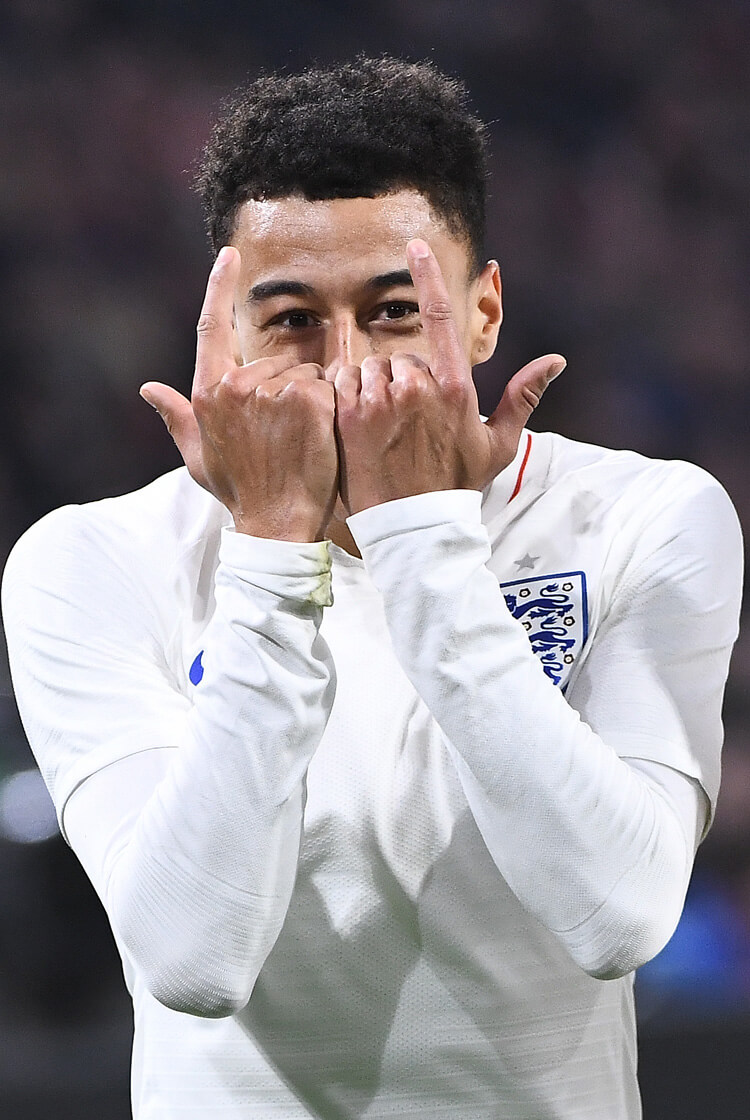 Manchester United midfielder Jesse Lingard was the matchwinner for England in this international friendly in Amsterdam, as Gareth Southgate's side extended their unbeaten run to seven in the build-up to this summer's World Cup in Russia. The visitors were the better team, with Liverpool captain Jordan Henderson an influential figure in front of a back three featuring Manchester City's Kyle Walker on the right. Raheem Sterling impressed in an advanced role up alongside Marcus Rashford, with Harry Maguire also looking comfortable after his introduction as an early replacement for the injured Joe Gomez. Everton goalkeeper Jordan Pickford, easy in possession throughout, looks in pole position to be Southgate's first choice in Russia. 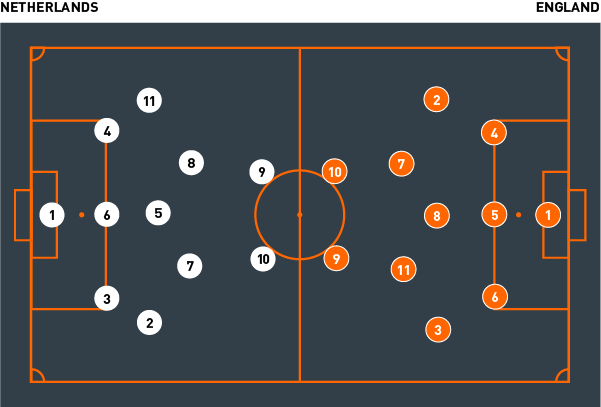 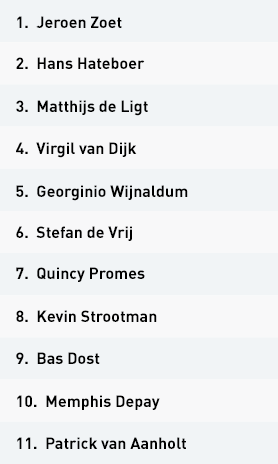 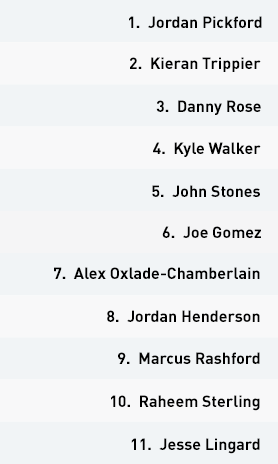 The starting formation of Ronald Koeman’s side was 5-3-2, occasionally shifting to a 5-2-1-2 in which Quincy Promes operated as a lone attacking midfielder. The front pairing of Bas Dost and Memphis Depay tried to force England goalkeeper Jordan Pickford, who constantly looked to play short to his defenders, into mistakes – but they never got close enough to seriously trouble the visiting back line.

Out of possession, their midfield attempted to push up and pressurise their England counterparts, with wing-backs Hans Hateboer and Patrick van Aanholt doing likewise to Danny Rose and Kieran Trippier respectively.

In the defensive third, their last line of defence outnumbered the attackers in central areas, but the desire of the Dutch wing-backs to get forward left gaps in behind, which either Virgil van Dijk or Matthijs de Ligt were obliged to fill – and these imbalances were exploited by the speedy England front line of Marcus Rashford and Raheem Sterling in particular.

Further up the pitch, their midfield line had a tendency to lose its structure and concede space in and around Jeroen Zoet’s 18-yard box. It was poor defending in these areas that allowed Danny Rose and Jesse Lingard the space and time from which the latter scored the decisive goal.

In possession, Zoet alternated between direct play into Dost and short passes with his three centre-backs, of whom Stefan de Vrij was often the one to drive into midfield areas. The discipline of England’s front lines of defence meant there was minimal room in midfield, however – and the Netherlands’ attackers failed to make good use of any space conceded by an extremely compact England defence. The Oranje focused too much on trying to break through the central channel, where Gareth Southgate’s men always had plenty of numbers, while declining to exploit any gaps in wide areas. Having failed to break through England’s defensive line with combination play, the home side instead looked direct to Dost up against the back three and tried to get midfield runners playing off him.

On the counter-attack, the Netherlands tried to play through Depay as much as possible – but his failure to find space in the final third limited his impact. The hosts too often lost possession in this phase, too, denying their most dangerous attackers the chance to have a genuine influence on the game.

Gareth Southgate’s side started in a 3-5-2 formation, wing-backs Kieran Trippier and Danny Rose dropping back to form a compact 5-3-2 in defence. The front lines of defence marked zonally out of possession, with the midfield trio stationed around the halfway line, and Marcus Rashford and Raheem Sterling pushing up to pressurise the man on the ball. The front two often made life difficult for the Netherlands as they tried to play out from the back, forcing Zoet to play direct on several occasions – although they were also happy to stand off Stefan de Vrij on occasions, encouraging him to advance forward and vacate space that could be exploited on the counter.

The visitors were not afraid of dropping deeper into their own half in certain parts of the game, however, with the aim of preventing gaps in behind their defensive unit. They defended solidly and collectively, particularly through the central channel – where Jordan Henderson, Alex Oxlade-Chamberlain and the two strikers protected the defensive lines while also posing a threat on the break.

In the final third, England’s last line of defence dominated individually and collectively. Kyle Walker, John Stones and early replacement Harry Maguire offered constant defensive support to the wing-backs to ensure that they were not overwhelmed out wide. Their defensive structure didn’t concede any space in behind, even after a raft of second-half changes.

Their defensive transition was fast and organised, allowing them to shift into an intense pressing game that repeatedly enabled them to win possession back quickly.

In possession, England employed a surprisingly bold combination-based approach, successfully beating the first line of pressure by giving themselves a numerical advantage. With Henderson always an option in front of him, goalkeeper Jordan Pickford was confident playing the ball out to defenders despite the proximity of the Dutch front line. Henderson was particularly influential throughout, his dynamism and intelligent use of possession in the centre of the pitch – combined with the movement of Lingard, Sterling and Oxlade-Chamberlain in between the lines – responsible for England’s impressive management of the game.

The visitors successfully accelerated their attacks in the final third, with Rashford and Sterling impressing with their runs through the last line of defence, while the wing-backs were able to take advantage of their opposite numbers’ desire to get forward. It was from Rose doing just this down the England left – and running into space not effectively covered by the Dutch back three – that the cross came for Lingard’s winner.

England displayed an impressive defensive organisation and rigour throughout. Gareth Southgate’s players were not afraid to drop deep into their own half in certain parts of the game, preventing gaps in behind. They defended particularly deep down the central channel.

Southgate surprised with his team selection both up front and at the back. He encouraged goalkeeper Jordan Pickford and his defenders to build from the back, ensuring gradual progression towards the halfway line through a possession-based approach.

The visitors dominated in the attacking phase and in midfield. Jordan Henderson was central to this as the pivot in the England midfield, making use of the intelligent and speedy movement of teammates such as Jesse Lingard and Raheem Sterling in between the lines.

The Netherlands did not have the attacking leverage to genuinely trouble the England defence. Their combination play failed to penetrate the compact defensive shape in front of them, while they rarely looked to exploit the spaces England seemed happy to leave in wide areas. They never managed to find a free man in behind the visitors’ defence.

The Dutch suffered from imbalances in their midfield while defending inside their own half. They didn’t react quickly enough to losing possession in these areas, leaving considerable space around the central midfielders for England to exploit.