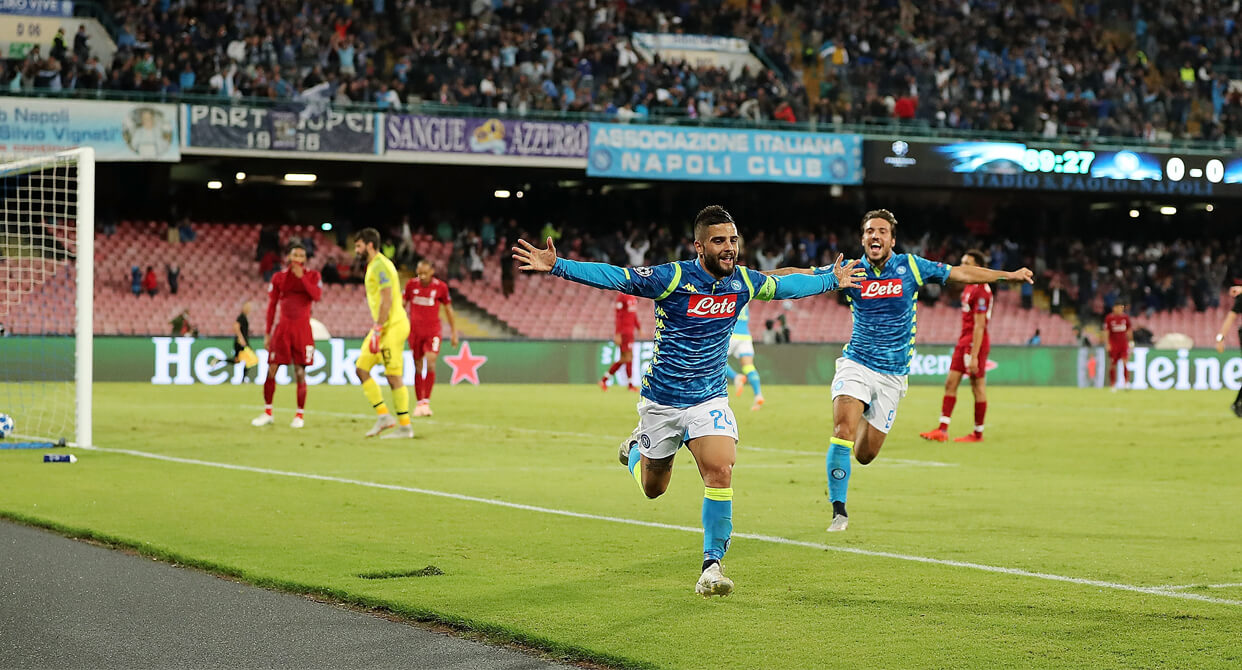 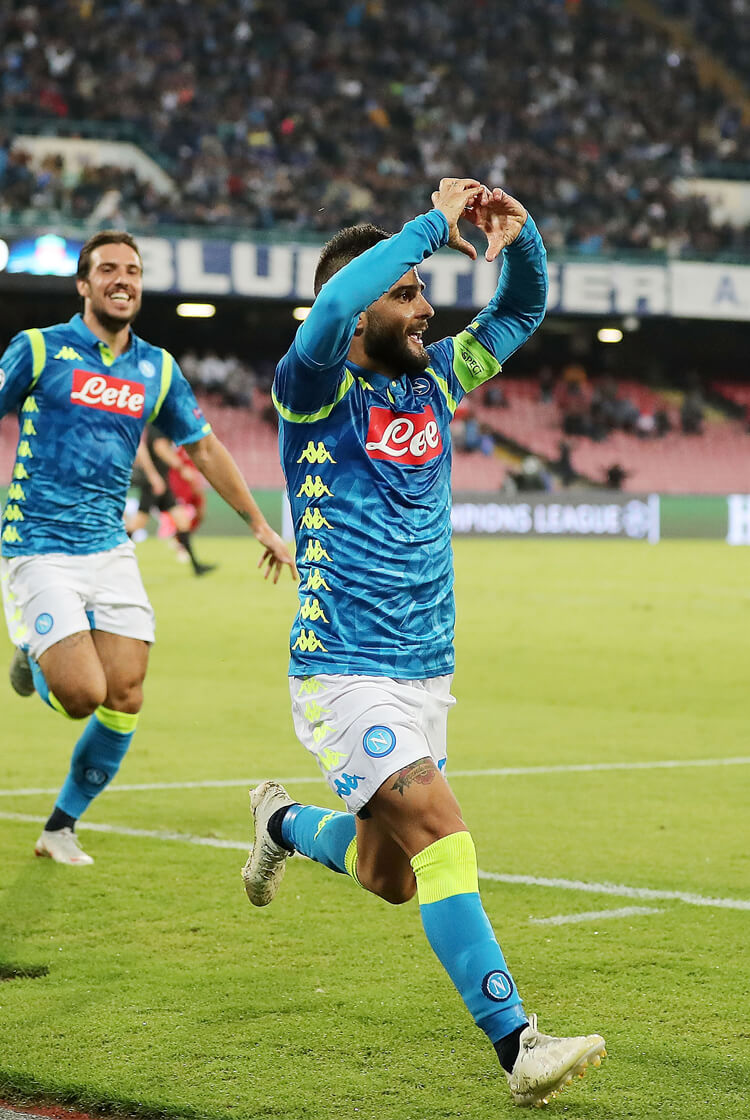 Napoli punished Liverpool in the final minute at the Stadio Sao Paolo, with a late goal from Lorenzo Insigne condemning the Reds to defeat in their Champions League clash. Jurgen Klopp’s players stunned Paris Saint-Germain in their opening game of the group at Anfield – but they were almost unrecognisable in Italy, failing to record a single shot on target to trouble David Ospina in the Napoli goal. The hosts were the more dangerous side, and Insigne’s finish as full-time approached secured three deserved points for Carlo Ancelotti’s Serie A team. A challenging couple of weeks of fixtures – including back-to-back meetings with title rivals Chelsea – might have taken their toll on Liverpool, but Klopp will be looking for an immediate reaction at home to defending Premier League champions Manchester City on Sunday. 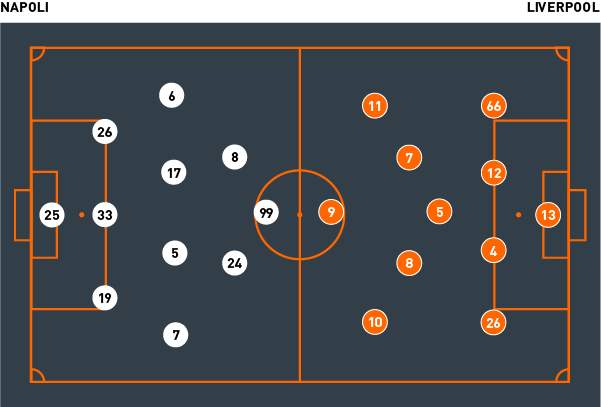 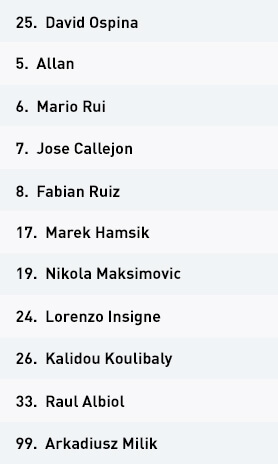 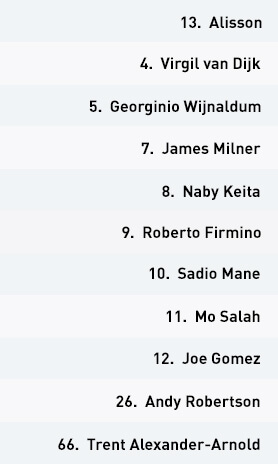 Napoli set up in a variation of a 3-4-3 that fleeted between this and a 3-4-2-1 system. The front three consisted of Lorenzo Insigne, Fabian Ruiz and Arkadiusz Milik, with the first two named occasionally dropping inside to create the 3-4-2-1. Marek Hamsik and Allan were deployed as the two deep central midfielders, with Jose Callejon and Mario Rui providing the width.

Carlo Ancelotti’s team looked to build from the back, switching between the two aforementioned structures when doing so. Typically, the centre-backs would be on a flat line, covering the two half-spaces and the central area, while Hamsik and Allan would sit in between the outside centre-backs, approximately 10 yards ahead. Callejon and Rui would provide support slightly ahead of the two central midfielders, but in wide areas.

Napoli were intelligent when playing out this way. They would drop Fabian Ruiz deeper to encourage Trent Alexander-Arnold to follow – this would then free up more space for Rui to receive out wide, forcing the Liverpool right-back to move from Fabian to Rui, at which point the former would run into the vacated space and be free to receive in the final third. Similarly, they would position Raul Albiol with Hamsik on the second line, and bring the ball out with the two remaining central defenders: Kalidou Koulibaly and Nikola Maksimovic. With Albiol on the second line, Allan could push higher and offer a penetrative option beyond Liverpool’s midfield.

The hosts’ main threat was always likely to come from the free man they had in the wide areas, particularly when Dries Mertens and Simone Verdi were introduced to form a new front three. The pair played much closer together and with greater fluidity, forcing their opponents’ back four to remain compact. Napoli could then move the ball inside before switching to Callejon or Rui, who could either attack themselves or deliver a cross – this was evident in their three best of chances of the game, including the winning goal. They also looked to create through simple balls in behind the defence for the penetrative runs of Mertens late on, although the Liverpool defence read these situations well.

Napoli operated in an organised and aggressive press out of possession. The press carried an element of risk, but with Mo Salah, Roberto Firmino and Sadio Mane not at their best, they managed to get away with it. Milik was tasked with taking care of Jordan Henderson; Fabian and Insigne with the two-centre-backs; Rui with Alexander-Arnold; and Hamsik and Allan with James Milner and Georginio Wijnaldum. On the right, Callejon was on a similar line to Hamsik and Allan when Liverpool built down that side using Andy Robertson. The area for concern with this was that Koulibaly, Albiol and Maksimovic were left to deal with Salah, Mane and Firmino on the halfway line – a high, three-on-three strategy that could have been disastrous had Liverpool been at their destructive best.

The home side were unwilling to play with this risk for the whole of the game, however. When they did choose to drop into more of a mid-block in a 4-4-2 structure, Rui would drop in to make a back four alongside Albiol, Koulibaly and Maksimovic.

Liverpool set up in a familiar 4-3-3 system, with James Milner, Georginio Wijnaldum and Naby Keita (who was replaced by Jordan Henderson after 20 minutes) sitting as the midfield three. Sadio Mane, Roberto Firmino and Mo Salah led the attack.

Jurgen Klopp’s players struggled to create anything of note throughout the game, failing to muster a single shot on target. They tried to bypass Napoli’s press by dropping Milner into a false full-back position, which allowed left-back Andy Robertson to push higher up the pitch and in turn enabled Mane to drop deeper in the half-space. Mane and Salah also attempted to pin the hosts’ back four by playing between them, so that Firmino could drop and create an extra man in midfield – a strategy they have regularly adopted this season. While this allowed Firmino to receive in between the lines, a lack of support around the ball meant the Brazilian often had to take a touch first before releasing, thereby slowing down the speed of the attack and affording Napoli the time to readjust. The intention would have been to drag a centre-back into the deeper space, creating space between the defence, before the ball was set to a deeper teammate to play through the newly created gap – this never really materialised, though.

Out of possession, Liverpool began by pressing high in their 4-3-3 structure – but Napoli were adept at breaking the press and playing through. They reverted to a mid-block for the remainder of the game, with Salah and Mane playing just ahead of the midfield three in the half-space, forming a curved shape, while Firmino placed the ball-carrier under mild pressure. Mane operated slightly deeper than Salah out of possession and was better positioned to discourage the diagonal pass from Napoli’s centre-backs into Jose Callejon. With Salah sitting slightly higher, the hosts were able to play a similar pass more successfully into Mario Rui on their left side.

The Liverpool back four had dealt well with the threat of centre forward Arkadiusz Milik, but they faced difficulties against the agile and technical play of Dries Mertens when he and Simone Verdi were introduced midway through the second half. In bringing on Fabinho to improve their defensive stability, the Liverpool players moved closer together – but this only increased the threat of the ball out wide, and it was from one of these late on that Callejon crossed for Insigne to inflict a defeat the visitors will have found decidedly painful.