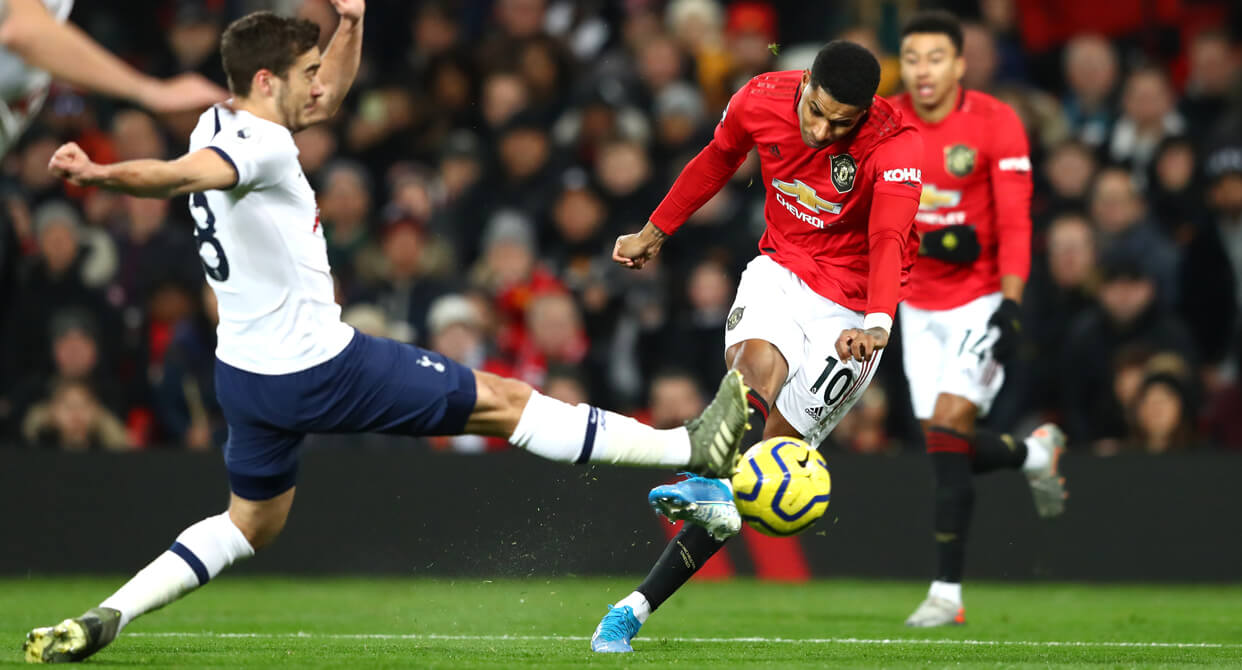 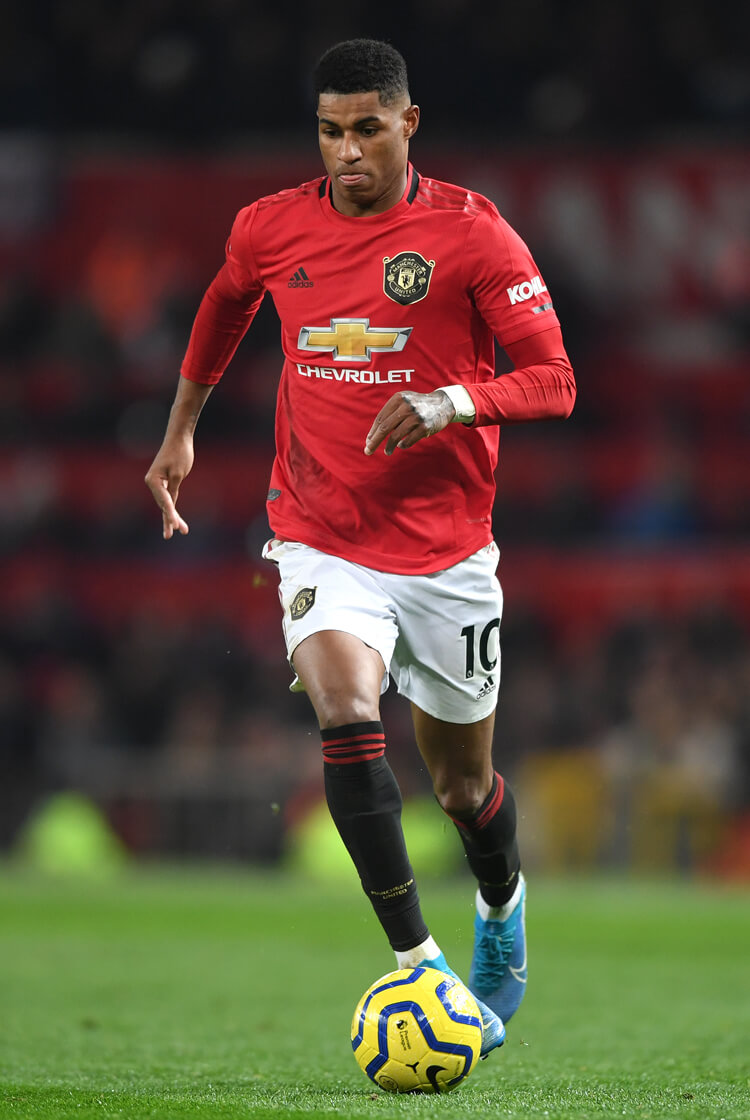 José Mourinho suffered his first defeat as Tottenham manager at the home of his most recent employers in Manchester United. The night started disastrously for the visitors, when Paulo Gazzaniga failed to stop a rasping Marcus Rashford shot at his near post only six minutes in. United had chances to extend their lead in a first half they dominated – Gazzaniga tipped another stinging Rashford effort on to the crossbar – but went in level after a superb Dele Alli strike shortly before half-time. The hosts were again the better team in the second half, with Rashford coaxing a foul out of Moussa Sissoko in the Tottenham box only three minutes after the interval. The England forward dispatched the spot-kick with confidence, his finish ultimately securing a valuable three points that took Ole Gunnar Solskjaer's men above Spurs in the table. 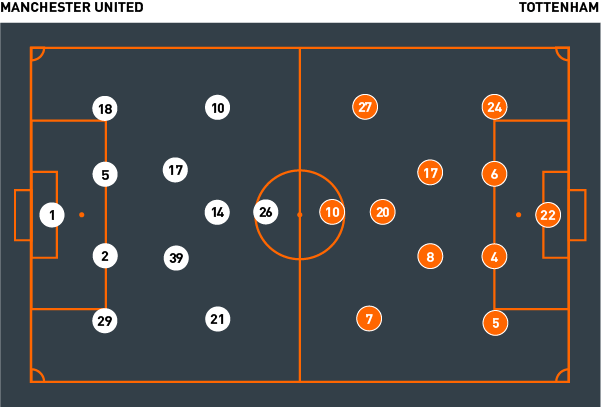 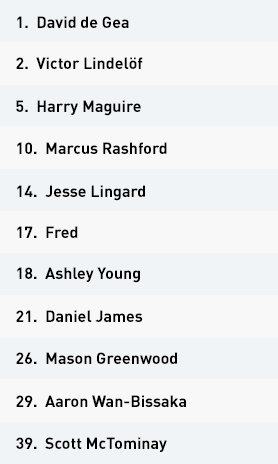 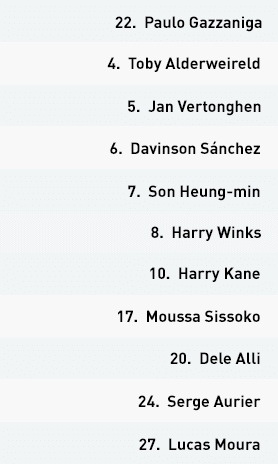 Ole Gunnar Solskjaer set Manchester United up in a 4-2-3-1 formation in possession, with Daniel James, Jesse Lingard and Marcus Rashford supporting Mason Greenwood in attack. The hosts had the majority of the possession in the first half, with Tottenham dropping off into a passive mid-block.

Spurs defensive 4-4-2 structure encouraged United to play into their full-backs, and with space inside limited the home side looked to clip passes in behind for the runs of James, Greenwood, Rashford and Lingard. Tottenham tried to close the spaces inside as the ball moved out to the full-backs, which forced United into these longer passes, but the defensive line struggled to deal with the runners in behind. United’s attacking quartet were fluid in their movement, looking to rotate and ask questions of Tottenham’s defensive organisation.

With space condensed, United looked to use runners to stretch the play while dropping other players towards the ball between the lines to create an overload against Moussa Sissoko and Harry Winks in the middle. The hosts nevertheless showed a bias towards their left-hand side during the first half, regularly playing into the feet of Rashford. The England international would then set the ball back to Fred or Scott McTominay, for one of the midfielders to play in behind for the runs of the other forwards, or take on right-back Serge Aurier one against one.


When Tottenham managed to force United to play backwards, the Spurs units would push further up the pitch. But this only served to increase the spaces between the lines, and United were able to bypass Harry Kane and Dele Alli with ease. Fred and McTominay kept things simple in possession, providing short options and guarding against counter-attacks.

Tottenham continued to be passive out of possession and fell into a low block as United advanced further up the pitch. The restricted space made it difficult for the hosts to find a way through, but it also allowed them to have lots of the ball, which in turn made it difficult for Spurs to find a way back into the game. With United’s front four regularly playing on different lines, there were several opportunities for combinations to try and unlock the Spurs defence. The hosts were able to work the ball into good areas in this way, but the decisive pass was often lacking and good-quality chances were difficult to come by. Ultimately, thanks to Rashford’s two strikes, this didn’t matter.

José Mourinho set his Tottenham team up in a 4-2-3-1 shape in possession, with Harry Winks and Moussa Sissoko operating as the two deep central midfielders behind Lucas Moura, Dele Alli and Son Heung-min, who supported Harry Kane in attack.

The visitors tried to build out from the back, but they found the spaces inside restricted and were forced into the same longer passes that United used into the channels – but with less success. United looked to use Mason Greenwood and Jesse Lingard to press the outside shoulder of the Spurs centre-backs and force them inside to trap Sissoko and Winks, but Spurs often found the initial pass to either full-back easy to come by when the press wasn’t quick enough.

Balls in behind from Tottenham were ineffective, however, due to a lack of runs from their attacking players or simply because they were overhit. Harry Maguire and Victor Lindelöf were adept at defending the channels and shepherding the ball outside, while United also positioned Fred and Scott McTominay close to the defensive line to pick up any second balls from Spurs’ direct play.

The visitors tried to rotate Alli and Kane where possible. Kane would often drop towards the ball and look to link play, while Alli made runs in behind to stretch the United defence. On occasions, Moura and Son would also look to make these runs in behind, but Spurs mostly struggled to find a way through.

United’s mid-block became more passive at 1-0 and at 2-1 up, with smaller spaces between the lines that Spurs had difficulty breaking into. In the second half, however, the visitors found themselves in better attacking positions, with more threats to the spaces in behind – but the execution of their passing in the final third was not good enough and attacks too often broke down, even when they committed greater numbers forward.

Towards the end of the game, United adopted a 5-2-3 formation, with Brandon Williams coming on to play at left wing-back while Ashley Young moved inside to operate as a left-sided centre-back. Spurs still had opportunities to hit them on the break, but they either moved the ball too slow initially or took too many touches individually. Ultimately, they didn't create enough quality chances to seriously challenge for the victory.