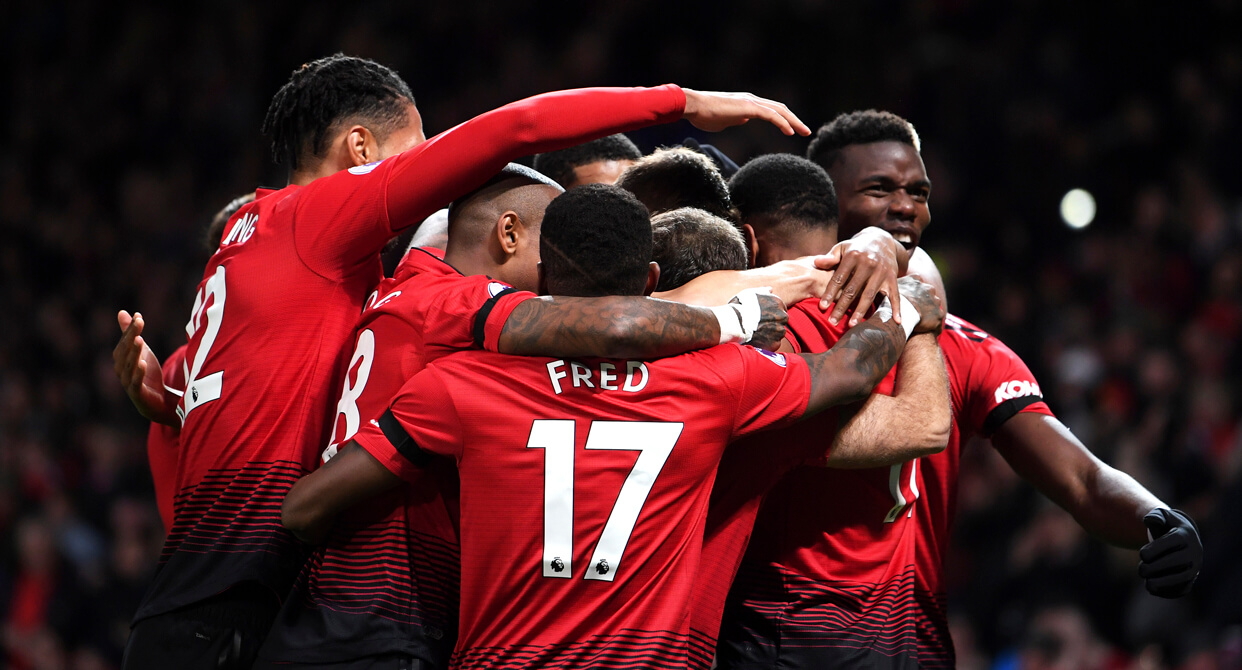 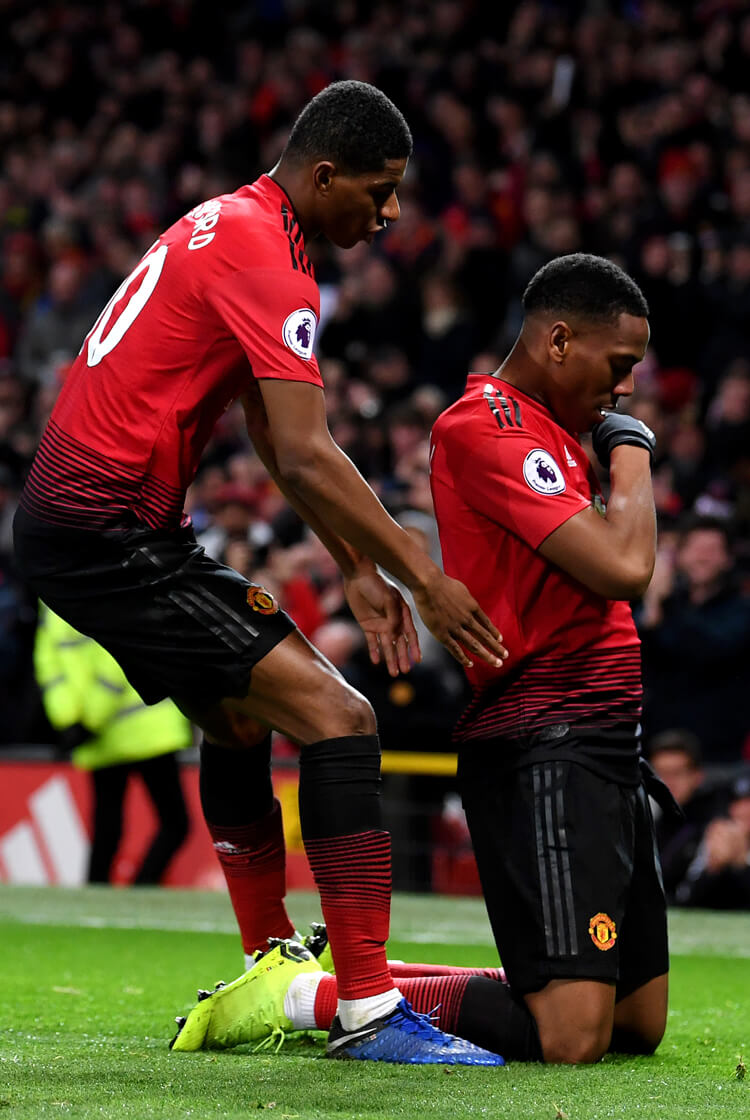 Anthony Martial scored for the third consecutive Premier League game, while Paul Pogba also got on the scoresheet (eventually) in a Manchester United victory over Everton that reduces the gap to fourth-placed Arsenal to five points. Pogba got the ball rolling in the first half, scoring from the rebound after goalkeeper Jordan Pickford had initially saved a penalty that featured a 26-step run-up. Martial then continued his fine run of form by curling in a sublime first-time finish at the start of the second half. Gylfi Sigurdsson grabbed one back for the Toffees in the 77th minute, scoring from the spot after Chris Smalling had brought down Richarlison, but United held on to claim three welcome points. 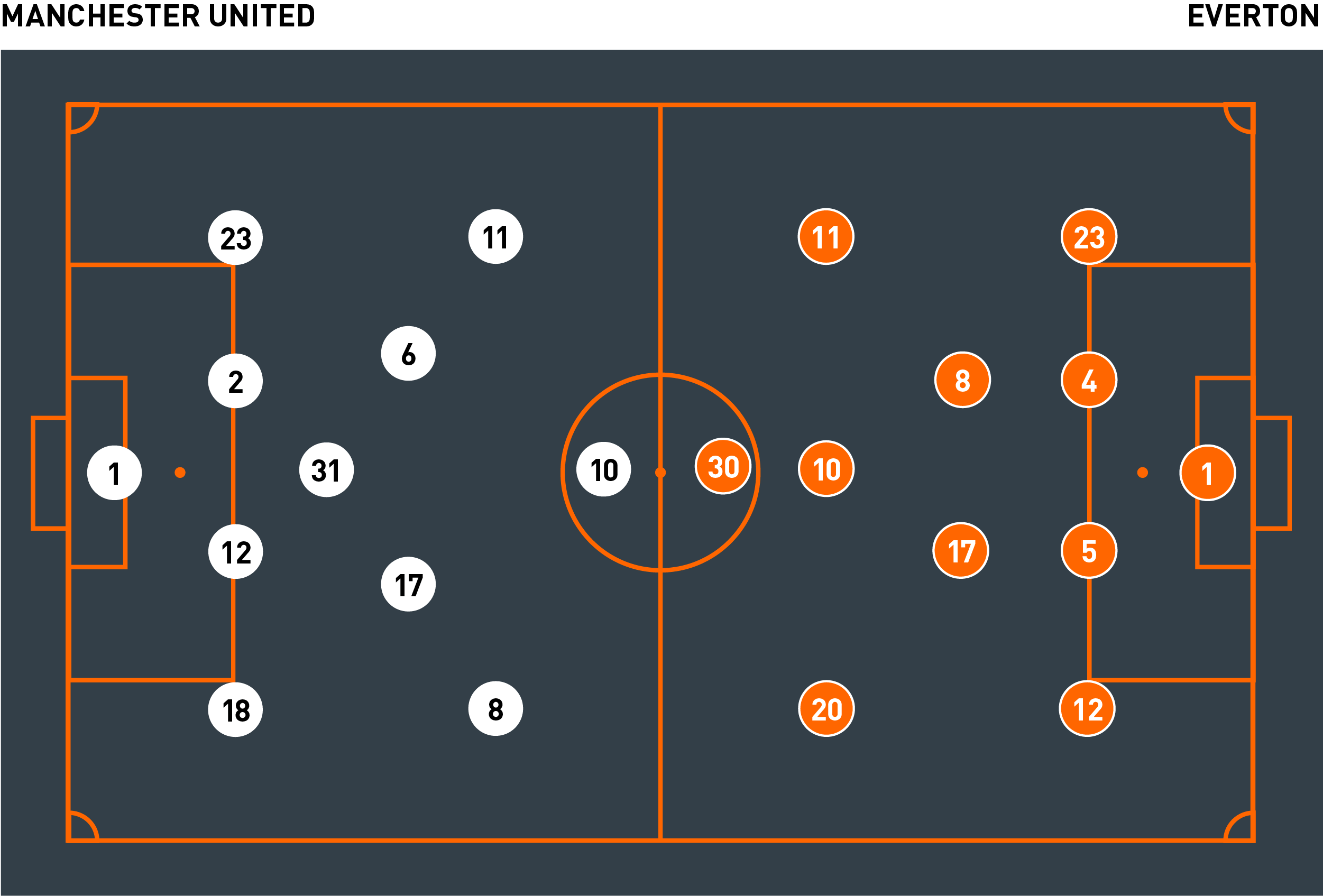 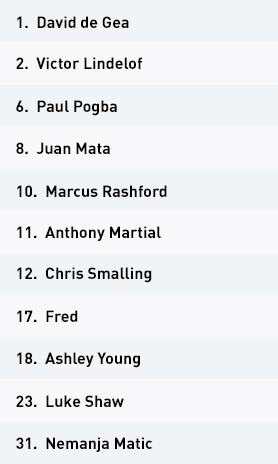 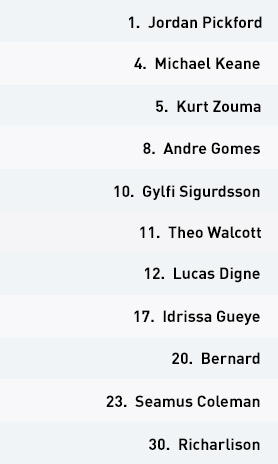 After a valuable draw away at Chelsea, Jose Mourinho made only one change to his Manchester United side. Former Everton striker Romelu Lukaku dropped to the bench, with Fred coming into central midfield – a change that saw the hosts convert from a 4-2-3-1 to a 4-3-3 formation.

It took a while for United to settle in possession, as they often looked to attack with every ball. Starting in the number 9 role, Marcus Rashford’s first movements were generally away from the ball, and this added to his team’s directness – linking the play with short passes might have been a more effective option.

As Everton converted into a 4-4-2 defensive structure, United’s overload was in their back line – so their central midfield trio of Paul Pogba, Nemanja Matic and Fred became overloaded against the visitors’ central units. Recognising this, full-backs Luke Shaw and Ashley Young started to provide maximum width to horizontally stretch their opponents’ midfield unit of four.

With Shaw and Young remaining outside their wide midfielders, gaps were created between Everton’s wide and central midfielders. The back line could then fire vertical passes through these spaces towards Juan Mata or Anthony Martial, as both stepped inside at the last second. Despite creating this method of penetration, these vertical passes were difficult to progress even further, with Mata and Martial lacking movement from a third man to create a combination.

United did rotate the central midfielder who dropped deepest, as they consistently created a 1-2 structure. Pogba, Fred and Matic occupied the single pivot role at various occasions during the first half, hoping to pull a central midfielder out of position. To their credit, Everton remained solid in their defensive structure.

The hosts’ struggles to progress into the final third were evident, but they still managed to take the lead. With Seamus Coleman moving forward from right-back, Martial exploited the space in behind before being brought down by the recovering Idrissa Gueye. Pogba stepped up and eventually slotted home the rebound after his initial effort was parried by Jordan Pickford after a seemingly endless 26-step run-up.

United created little after scoring, yet managed to double their advantage soon after the restart. Everton only partially cleared a cross from Young, and Pogba found Martial, who curled a sublime first-time effort into the far corner. This time they maintained the pressure on their opponents, as Rashford’s dropping movements offered a central overload that was missing from their first-half performance. As Rashford dropped away from the visitors’ back line, Martial and Mata also narrowed, tightening Everton’s defensive structure – this created the opportunity for Shaw and Young to overload around the defence and make good use of switches of play.

Lukaku replaced Rashford in the 65th minute, and this resulted in the temporary loss of their central overload. The centre forward remained the highest player, rarely dropping towards the ball in the central lane. To re-establish control against a team beginning to dominate possession, Mata moved inside from the right – his one and two-touch passing in midfield not only created longer spells with the ball, but also enabled for more consistent switches of play.

Out of possession, the hosts utilised a 4-1-4-1 structure, with Matic tasked with blocking access into Gylfi Sigurdsson between the lines. Their central compactness allowed Everton to target the wide areas both when in possession and during moments of transition – despite this, crosses into the penalty area were comfortably dealt with by the back line.

As the first half progressed, United’s central rotations improved their play with the ball but hampered their defensive structure without it. As Matic stepped higher and rotated with Pogba or Fred, central stability was lost – especially during moments of transition. This was magnified as Everton started to push Coleman forward from right-back, with Martial only partly tracking his progress – this then forced one of the central midfielders to step across, creating an avoidably large central space.

In throwing more players forward in the second half, United became more vulnerable to the counter-attack. Everton’s direct play with through balls in behind frequently split the central defence and higher line. It was the creation of a central overload that eased this pressure and enabled United to dominate the ball, thereby reducing the Everton threat in transition.

Sloppy play in possession from Pogba, coupled with a poor defensive tackle from Smalling, allowed Everton back into the game. Sensing the danger, Mourinho introduced Ander Herrera late on to help his side see out an important victory.

Head coach Marco Silva selected the same starting line-up that beat Crystal Palace at home in their previous Premier League fixture. The Portuguese coach maintained a 4-2-3-1 structure, as Everton looked to make it four league wins in a row.

The Toffees started brightly, looking to penetrate in behind on the left side in particular. Lucas Digne was an early threat, as he made progress along the touchline from left-back, stepping inside to receive passes in behind. Aerial passes over Ashley Young from Bernard, who had rotated inside, or left centre-back Kurt Zouma enabled penetration but made it difficult for Digne to cross first time. This afforded the Manchester United defence time to drop back into the penalty area and overload striker Richarlison.

In continuing to target the wide areas, the visitors’ play soon became predictable. Combinations between Digne, Bernard and Richarlison became telegraphed, and United were able to regain possession in wide areas. A lack of movement from Gylfi Sigurdsson away from the central lane added to this predictability, as United’s defensive midfielder (usually Nemanja Matic) simply man-marked the Icelandic playmaker. Only when Richarlison dropped short and briefly occupied Matic did Sigurdsson find spaces within the final third – but with Richarlison now out of the penalty area, there was no central target at which to aim crosses from the wide areas.

Seamus Coleman briefly supported forward from right-back, allowing Theo Walcott to step inside – either as a tool to combine, or to add a crucial second presence inside the penalty area. This again afforded Sigurdsson more central space, and increased numbers in attacking areas.

Everton focused on transitional moments in the second half, as their opponents threw more players into attack. Coupled with a much higher defensive line, they looked for through balls for Walcott, Bernard and Richarlison to run on to. Sigurdsson’s movements towards the ball enabled a quicker forward pass into midfield, as they set out to penetrate forward as quickly as possible. Bernard should have grabbed one back, moving on to Sigurdsson’s well-timed through ball and rounding goalkeeper David de Gea, but his effort hit the side netting.

The visitors created a spell late on where they dominated the ball, with Andre Gomes becoming instrumental in linking defence to attack, as United dropped back into a compact defensive structure. Despite an increase in possession, they still relied on the full-backs to deliver attacking crosses and their play in the final third otherwise lacked invention. Predictable crosses into Richarlison were easy to clear, particularly with United defending in large numbers. They eventually pulled one back from the penalty spot; while their confidence did grow after this, they failed to create any further serious chances.

Out of possession, the Toffees’ defensive structure resembled a 4-4-2. In order to maintain a central overload, they dropped into a mid-block – this meant their central block could position itself in front and behind United’s central midfielders. Sigurdsson stepped higher, forming a front two with Richarlison, while Gomes and Idrissa Gueye remained in central midfield. United’s midfielders hoped to pull Gomes or Gueye out of this defensive shape and create a larger central gap to penetrate by constantly rotating their role – but neither midfielder took the bait.

Matic’s lack of quality as an advanced midfielder gave Everton the chance to regain possession in the middle of the pitch, and break forward. Rarely were chances created from these regains, but they did stop the hosts from attacking further. Their high pressing broke down when Matic was the deeper pivot, and Fred and Pogba were the advanced midfielders. During these occasions, United’s central midfield was at its strongest, and their quality on the ball overcame the visitors’ aggressive press. This resulted in the Toffees dropping back into a mid-block, as they started to see less of the ball.

They struggled in the second half when Rashford moved away from the back line, creating a central midfield overload for United. The central defenders couldn’t follow the England international, as that would have left an enormous gap in the defence that could be penetrated. As a result, they were forced to allow the central overload and relinquish control of the ball. In then pushing their full-backs on, United could have been hurt on the counter, but Everton failed to muster spells of possession long enough to break away from their own half.