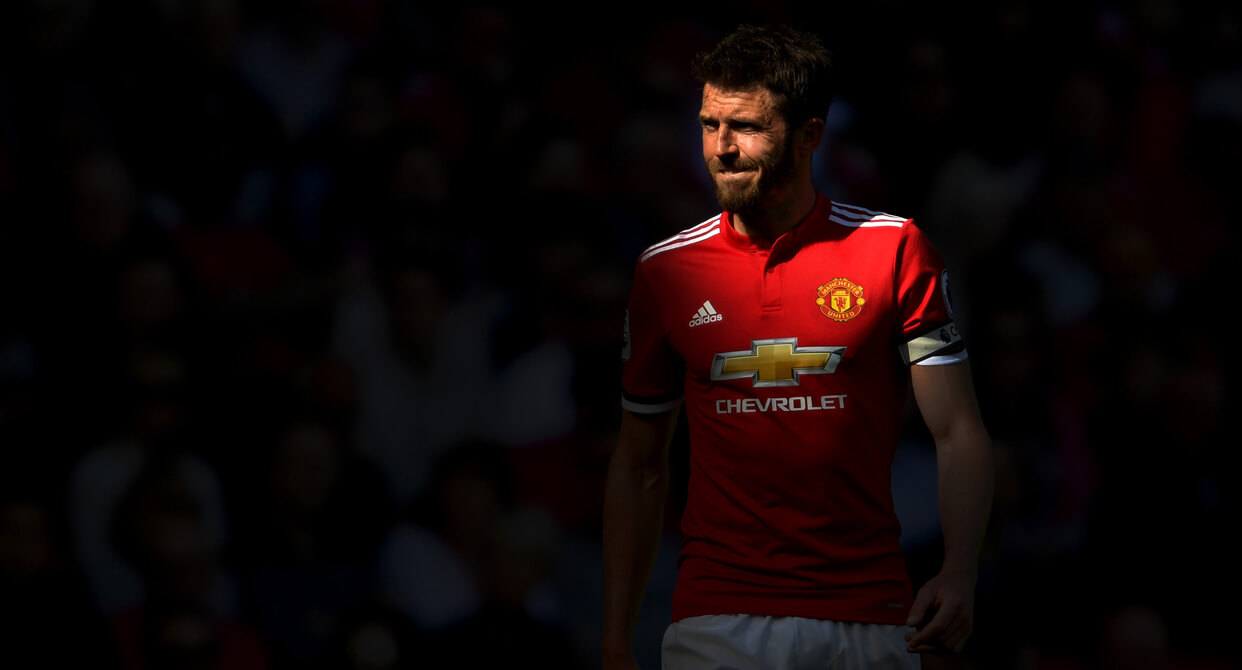 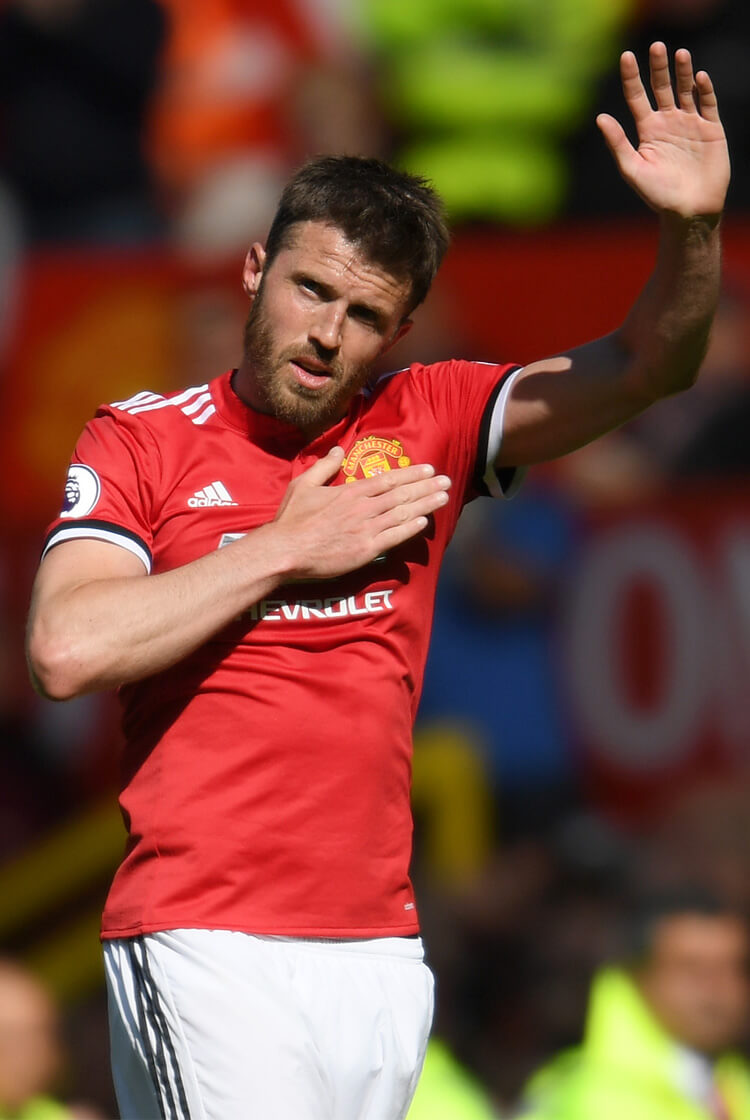 Manchester United's narrow 1-0 victory over Watford on the final day of the season, courtesy of a 34th-minute goal from Marcus Rashford, was far from the most memorable of Premier League contests, but Jose Mourinho won't be concerned by the performance. With second place – the club's highest finish since Sir Alex Ferguson retired in 2013 – confirmed before kick-off, his attention is understandably fixed on the FA Cup final on Saturday. The Red Devils made nine changes from the midweek game against West Ham, with Michael Carrick, ending his playing career, one of those coming in. Here, our professional coaches analyse the tactics and key moments from the action at Old Trafford. 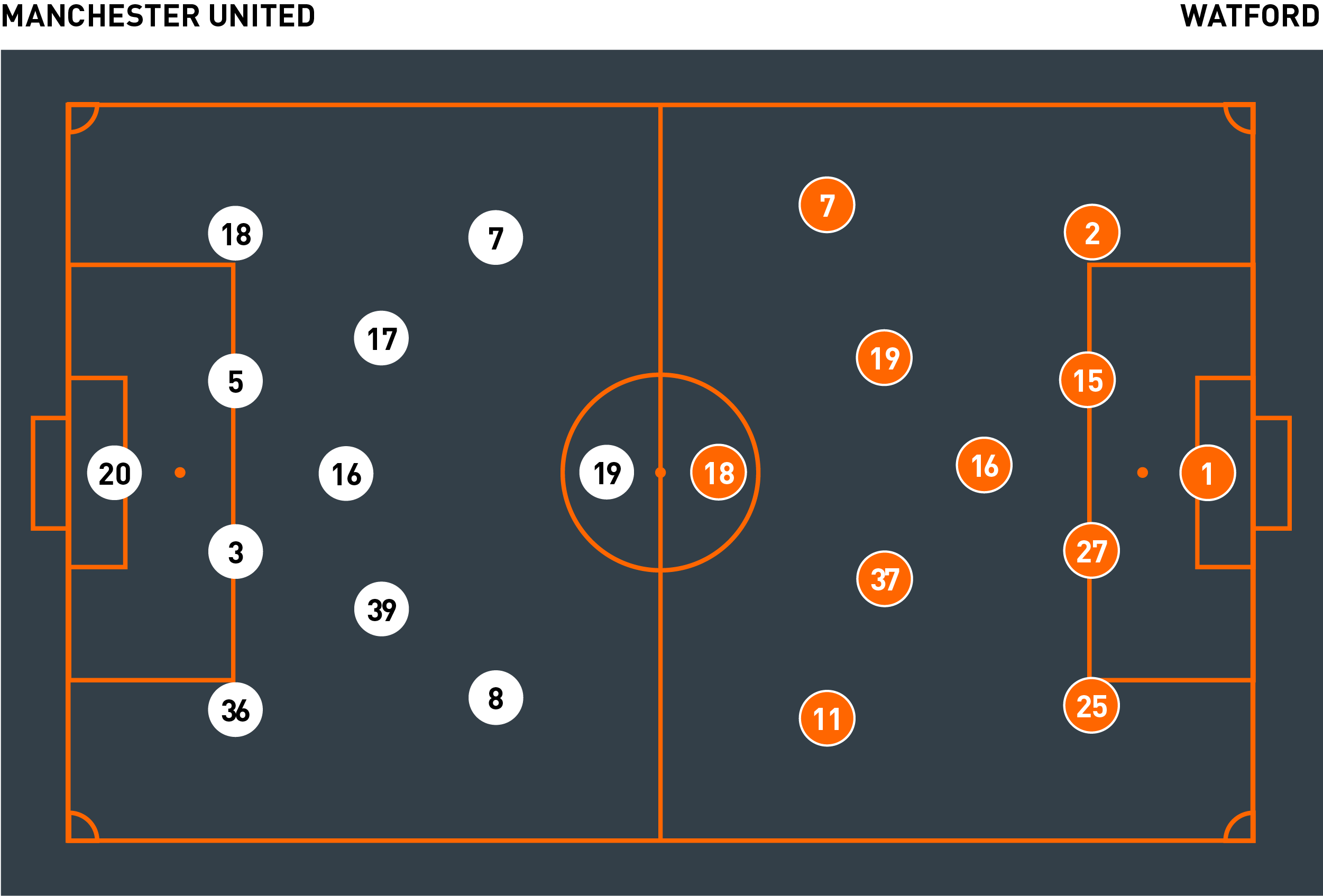 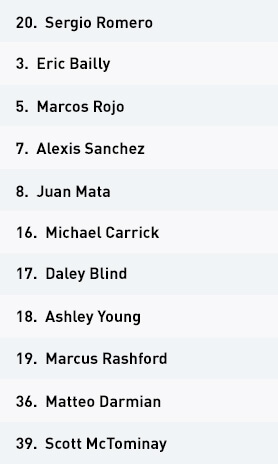 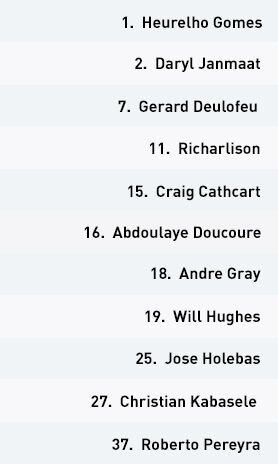 Manchester United set up in a 4-3-3 structure, switching to a 4-5-1 defensively. The opening exchanges of the game produced few real chances. Neither team appeared willing to take the initiative.

Michael Carrick, ending his playing career, had a key role by dropping and building the attacks for United from midfield, with Juan Mata coming in from the right and making runs in behind to complement Marcus Rashford. Scott McTominay had some problems early on, losing the ball several times and allowing Watford the opportunity to counter.

The freedom of Alexis Sanchez and Mata stood out in United’s build-up play during the first half. When Daley Blind, as one example from midfield, dropped to create a double pivot with Carrick and drag out a Watford midfielder, Sanchez would come inside, while full-back Ashley Young would go high and offer width.

This rotation allowed United to find gaps to exploit in Watford’s midfield, but McTominay had an important role. The 21-year-old needed to drift higher and occupy Abdoulaye Doucoure, to allow the wingers to receive in greater space. This wasn’t without its weakness, as United were left vulnerable to the counter in the wide areas when their full-backs were positioned higher.

It was clear from the opening stages that getting Carrick on the ball deep was crucial to unlocking Watford’s defensive structure – and his positioning was key in the goal. Carrick dropped to receive without pressure before playing a pass into Mata, who had run centrally in behind the Hornets’ defence. Rashford was in support of the Spaniard to score in the 34th minute.

The freedom of Mata and Sanchez to drift and make runs from deep, or to drop and receive, made the pair difficult to pick up. They caused a number of problems for Watford in the first half.

The Hornets took more control of the game in the second half. Jose Mourinho’s team, typically, were unconcerned by having less possession and dropping lower. Sanchez and Rashford were the main outlets in sparking any counter.

The hosts did, however, have issues in the wide areas. As Sanchez didn’t help to track the offensive runs of Daryl Janmaat, Young was vulnerable on the left side. After the latter picked up an early yellow card, Mourinho opted to replace him with Luke Shaw in a bid to gain defensive stability on that flank.

United created an intelligence between counter-attacks and discipline to prevent Watford from gaining any momentum back in to the game. They managed the contest well to see out the win.

Watford set up in a 4-1-4-1 system, and defensively this structure remained intact throughout. Abdoulaye Doucoure played an important role in screening behind his teammates as the holding midfielder.

Doucoure was often significant in breaking up United’s attacks and setting up the counter. Watford’s best opportunities in the first half came in transitions after winning the ball back centrally. Gerard Deulofeu and Richarlison would break quickly, with Andre Gray, Roberto Pereyra and Will Hughes in support.

Their biggest issues came when they dropped into their defensive 4-1-4-1 structure. Michael Carrick and Daley Blind were able to drop and pick up the ball without pressure, as the frequent central positioning of Mata and Sanchez meant the Watford midfield would step up and create space.

When United dropped into their lower defensive block, Watford looked to maintain width with Deulofeu and Richarlison in the hope that they would create chances from one-versus-one situations. Ashley Young was particularly adept at dealing with this threat, with Deulofeu’s success limited in the wide areas.

Watford’s most promising opportunity did come from a cross from their right side, however, as Richarlison peeled off the shoulder of Eric Bailly, who was caught square and unaware of the run in behind him. The young Brazilian should have scored with a free header.

The half-time break lifted the Hornets, and they took control of the game in the second half. They enjoyed more possession and pushed United back into a lower block. Their full-backs, Jose Holebas and Daryl Janmaat, moved higher, while their wingers moved inside more to occupy United’s full-backs. With Sanchez less inclined to track deeper and follow his full-back, this created an overload in the wide areas.

Javi Gracia made a change, with Troy Deeney coming on shortly after the hour mark to offer more presence in attack, particularly in the penalty area. But with Gray moving wide, they were left vulnerable on the left, as Gray was less effective defensively than Deulofeu.

United took few risks, though, and refused to allow the game to open up. Watford, as a result, found it difficult to unlock their opponents’ defence and create the openings needed to bring the game level.

United had the majority of the ball in the first half, with Michael Carrick and Daley Blind dropping to secure possession and dictate the play. The freedom of Alexis Sanchez and Juan Mata, meanwhile, was key in creating attacks, and their movement placed notable emphasis on Ashley Young and Matteo Darmian pushing on and providing width.

When attacking, United were vulnerable in transition. With Young and Darmian positioned high, Watford exposed the wide areas on the counter, particularly on the the hosts’ left side. Sanchez had little interest in tracking back and supporting Young.

United took fewer risks in the second half, remaining in a lower block and relinquishing more possession to Watford. The Hornets pushed higher through their full-backs and more dynamic midfield positions; United, however, absorbed the pressure and defended well to close the game off.