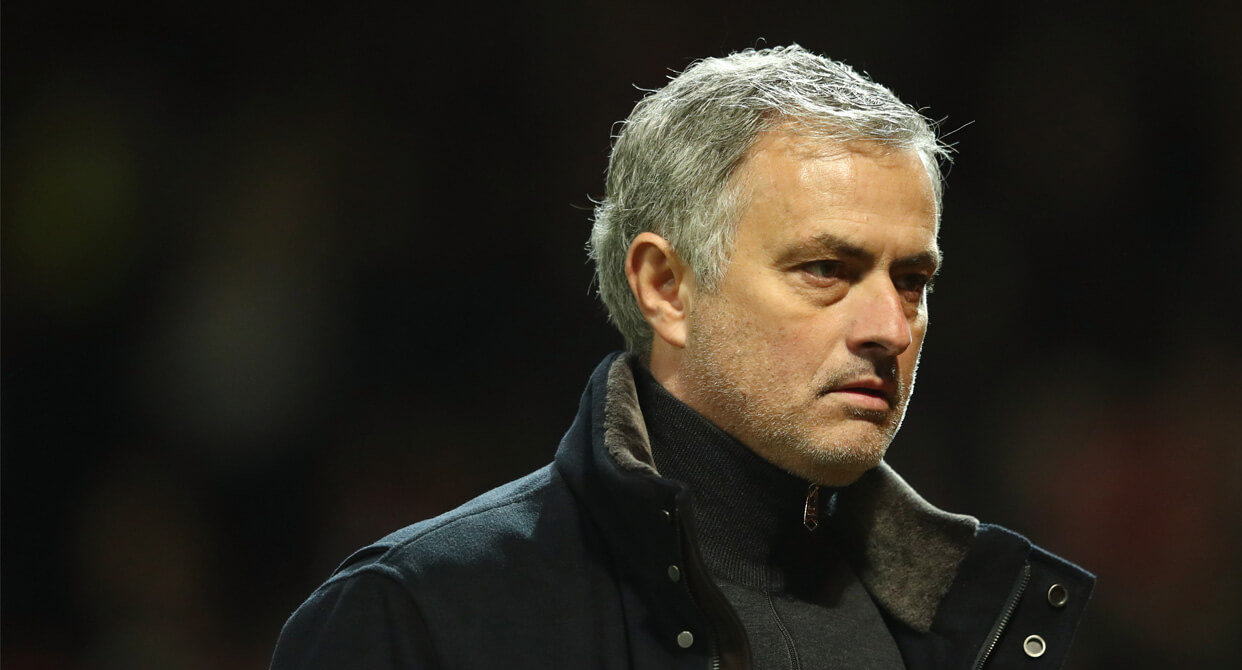 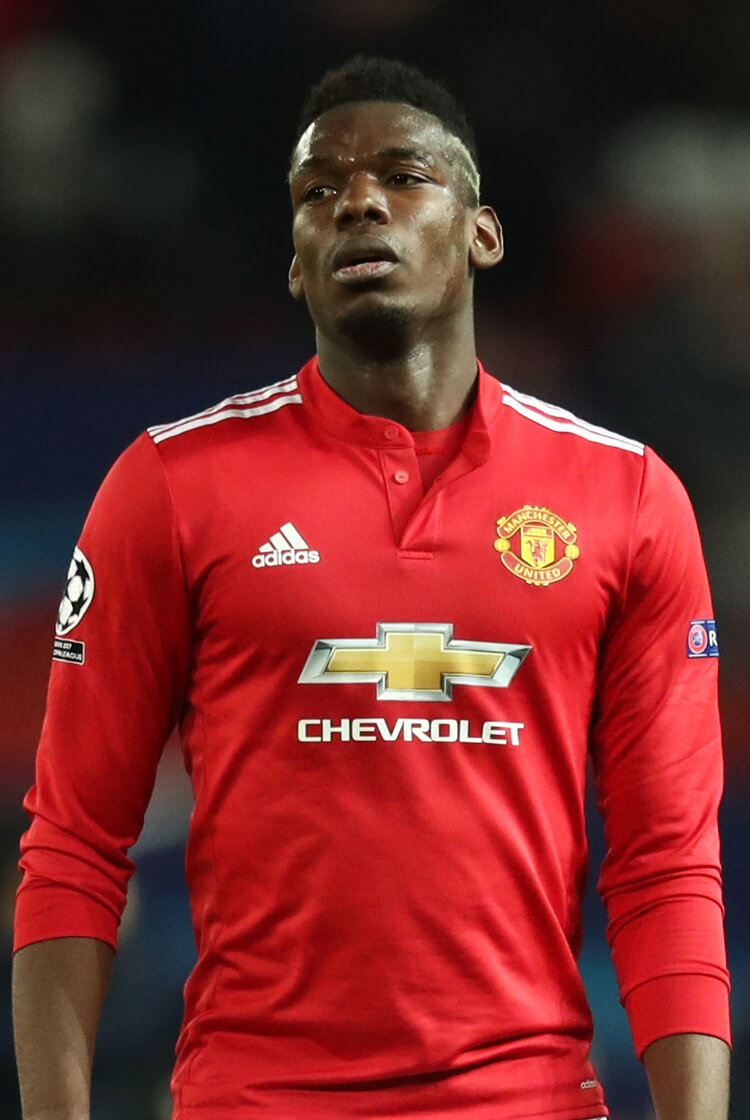 The game that launched possibly the most entertaining press conference of the season so far wouldn't have felt so great for Manchester United fans on the night, as unfancied Sevilla came to Old Trafford and swept into the Champions League quarter finals at the expense of Jose Mourinho's desperately disappointing side. United rarely looked like getting the better of their Spanish opponents on a strange night, to the point that it was no surprise when substitute Wissam Ben Yedder placed the opening goal beyond David de Gea on 74 minutes. The same pair were involved in Sevilla's second only four minutes later, when de Gea really should have stopped Ben Yedder's soft header. Romelu Lukaku's unequivocal strike from a corner six minutes from time gave the hosts some hope of a magical fightback, but it never looked like being one of those nights... and it wasn't. 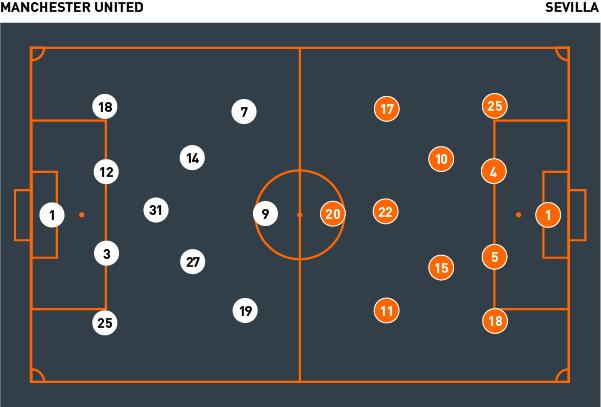 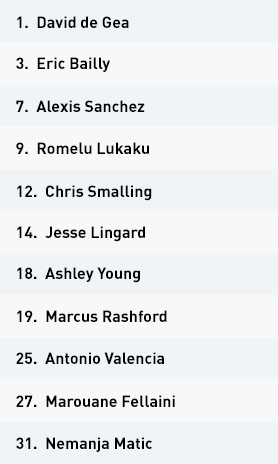 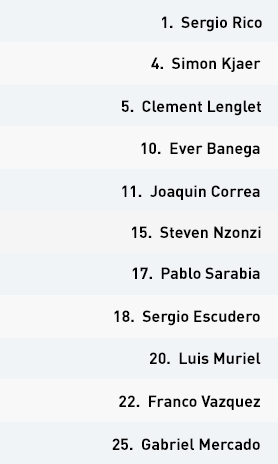 Jose Mourinho’s side started in a 4-3-3 formation but most often lined up in their 4-1-4-1 defensive variant, with Nemanja Matic stationed behind a flat midfield four and Romelu Lukaku left alone up front. After Paul Pogba came on in the second half, they switched to 4-2-3-1 in attack, with Pogba joining Matic in central midfield and Jesse Lingard pushed forward to join Alexis Sanchez and Marcus Rashford in supporting Lukaku.

In the first half, Mourinho looked to his three central midfielders to man-mark Sevilla’s most dangerous men in possession and prevent them from playing through his side’s defensive shape. Matic tracked Franco Vazquez, Marouane Fellaini marked Steven N’Zonzi and Lingard looked after Ever Banega, who drifted into wide positions as a means of finding space.

United defended very deep in this period and were able to keep control of the space, but after the introduction of Pogba in the second half Banega found more space in the central channel and was able to make intelligent runs and find both Vazquez and the dangerous Pablo Sarabia. Matic, not for the first time this season, found himself outnumbered in defensive areas, while Chris Smalling and Eric Bailly behind him left too much space between them and struggled to deal with the movement of substitute Wissam Ben Yedder. For long periods in the second half, the United defence were overrun.

In the defensive transition, United dropped back into their half in a bid to keep space between their midfield and defensive lines at a minimum. This was particularly evident when losing possession in the Sevilla half; in their own half, they increased the pace of their reorganisation and pressing game.

In attack, United showed a remarkable lack of attacking intent for a team playing at home in the Champions League knockout stage – and as a result rarely threatened the Sevilla penalty area. David de Gea and his defenders mostly looked direct to Lukaku or Fellaini, even when faced with a minimal press, in a bid to get the ball forward and target supporting runs.

In midfield, their main objective was to move the ball wide as quickly as possible and get balls into the box. Lingard was more effective than his teammates in this part of the game, both in picking up possession from his defenders and then supporting his wide men, notably Rashford, down the flanks. In the final third, Lukaku and Fellaini tried to free themselves from the Sevilla centre-backs and isolate the shorter, more vulnerable full-backs – but in truth this approach had little impact against a well-organised Sevilla defence that always had numbers back.

Vincenzo Montella’s side started in a 4-2-3-1 formation in possession but dropped back into a flat 4-4-2 in defence, with Joaquin Correa and Pablo Sarabia stationed wide and Franco Vazquez joining Luis Muriel in the first press.

Sevilla defended solidly all over the pitch to prevent the hosts from building attacks. Both individually and collectively, centre-backs Clement Lenglet and Simon Kjaer were towering presences, working to nullifying the hosts throughout. In midfield, Steven N’Zonzi and Ever Banega worked to shield the defence, while Correa and Sarabia got back to help their full-backs and prevent them being outnumbered in wide positions.

In so doing, Montella set his team up to limit the number of crosses United could aim into their penalty area for Romelu Lukaku and Marouane Fellaini. When the home side’s wide players were able to get into crossing positions, Sevilla marked the two main target men tightly but also had plenty of numbers back and reliniquished little space in behind. On the few occasions United did get shots away, goalkeeper Sergio Rico produced some important saves.

In the defensive transition, Sevilla looked to press the player in possession while the back four dropped back to protect against the long ball for Lukaku. Banega and N’Zonzi were responsible for balancing out the space in intermediate positions, stopping United from playing through them.

In possession, the visitors always had the option to send the ball long and look for the hardworking Luis Muriel in behind the last line of defence. If they played through midfield, Banega and N’Zonzi would first look to keep possession away from United’s dangerous counter-attacking talent, but then look for their own attacking threats – Sarabia, Correa, Vazquez – in behind Matic. This was difficult in the first half, when the home side played a more compact midfield three, but became easier once Paul Pogba was introduced for Fellaini in the second half and they switched to a two-man central midfield. The relatively defensive mindset of the Sevilla full-backs meant almost all of their threat came from central areas.

After the introduction of Wissam Ben Yedder on 72 minutes, Sevilla fully exploited the gaps around the United penalty area. This became clear in the opening goal, when Sarabia escaped the attention of Ashley Young and drifted in behind Pogba before playing a precise ball into a free Ben Yedder.

Manchester United showed a remarkable lack of attacking intent for a team playing at home in the Champions League knockout stage. As a result, they rarely threatened the Sevilla penalty area.

Sevilla defended solidly all over the pitch to prevent United from building attacks. Both individually and collectively, Clement Lenglet and Simon Kjaer were towering figures at the heart of the defence, nullifying the hosts entirely.

In the first half, the home side dropped deep behind the halfway line whenever they lost the ball, in a bid to prevent Sevilla’s chief threats from finding space to play through their defensive unit.

As the game wore on and after the introduction of Paul Pogba, Sevilla created dangerous situations in behind the isolated Nemanja Matic. Franco Vazquez, Ever Banega and Pablo Sarabia worked cleverly to outnumber the Serb and get the ball forward into threatening areas.

Substitute Wissam Ben Yedder was a determining factor in the match. After his introduction, Sevilla were better able to exploit the gaps in between the United defenders, which led directly to the opening goal.