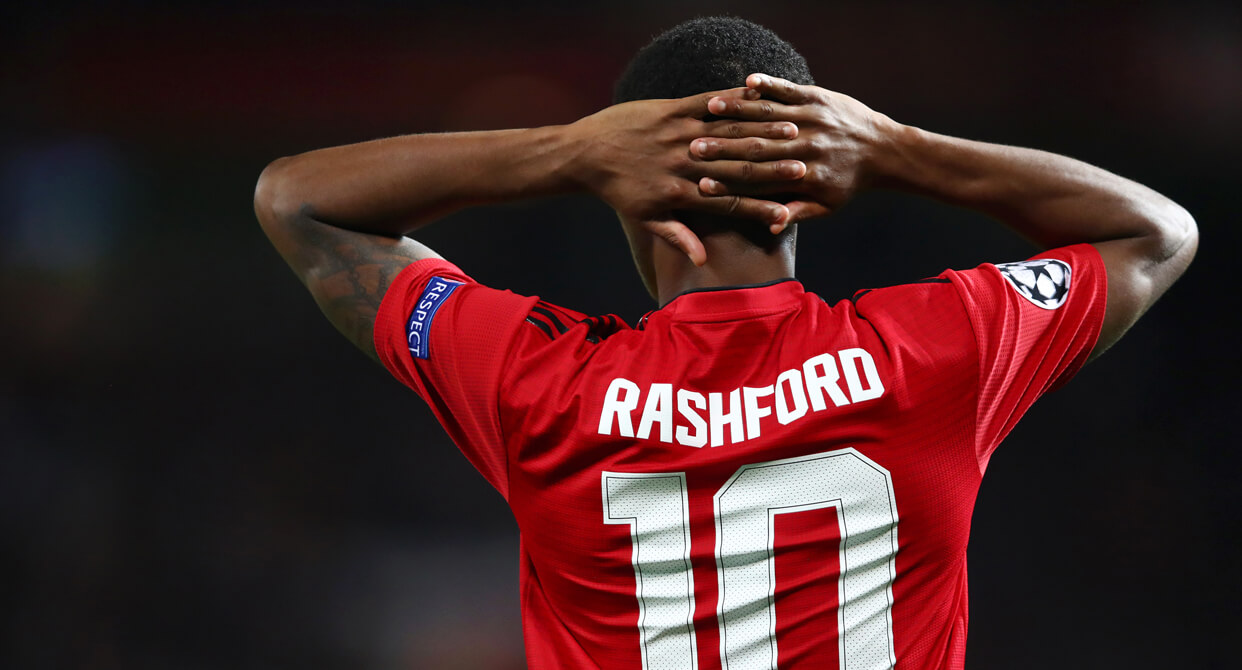 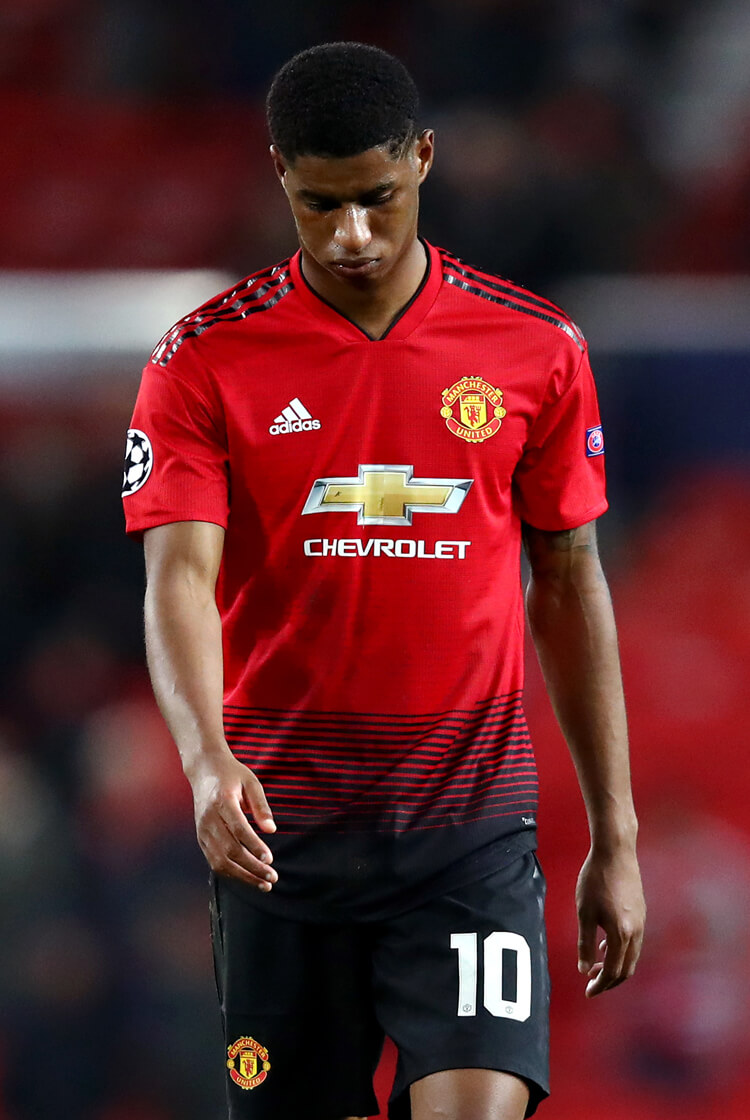 Jose Mourinho is still feeling the pressure as Manchester United manager, with his players again failing to inspire in a goalless draw at home to Valencia in the Champions League. Without a win in three games in all competitions, United were roared on by an Old Trafford crowd desperate for victory – but they couldn’t find an opening in a game of few chances. Marcus Rashford came closest in the final minutes of the contest, hitting the top of the bar with a free-kick, but United will need to up their performance when they next host Juventus in Group H. 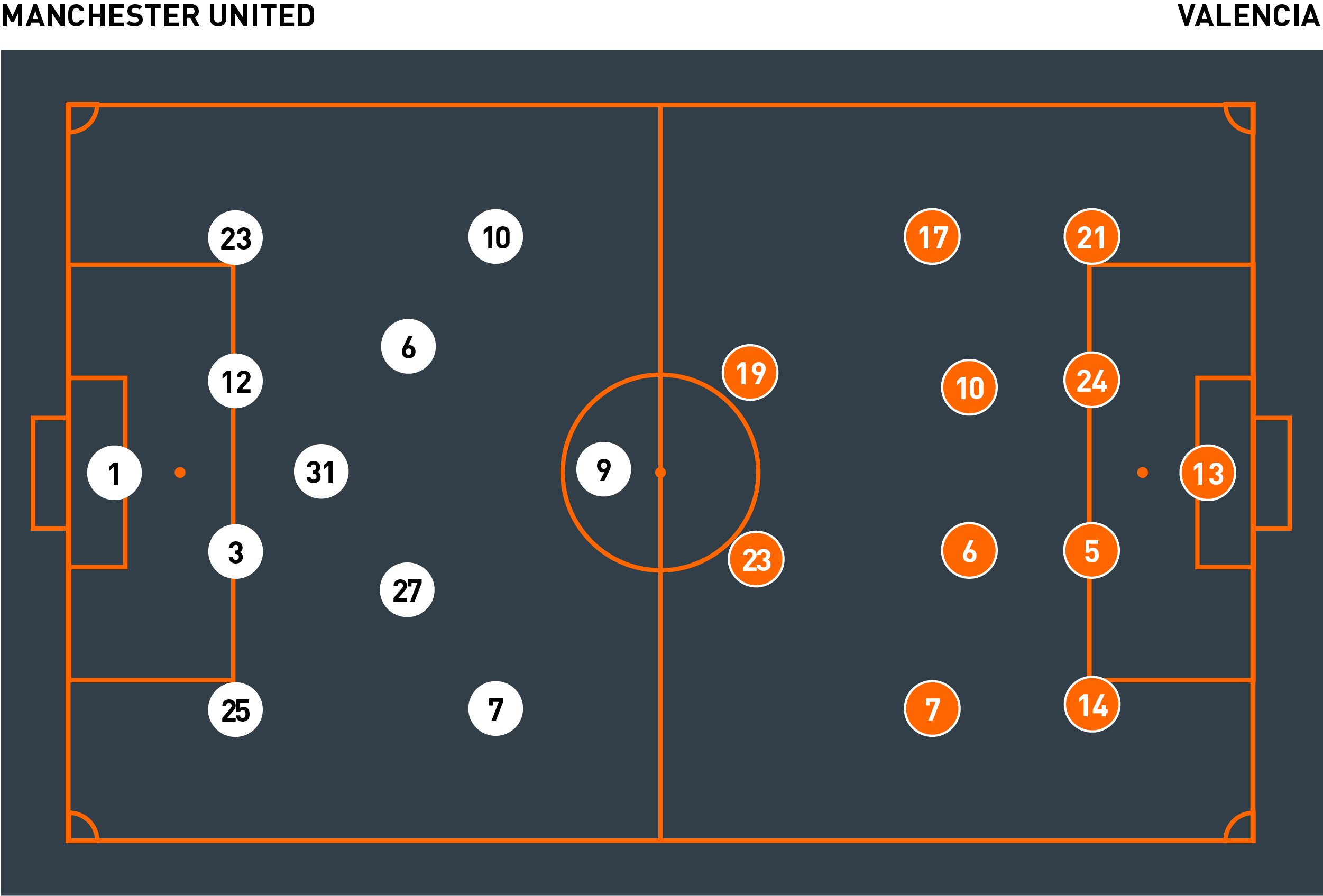 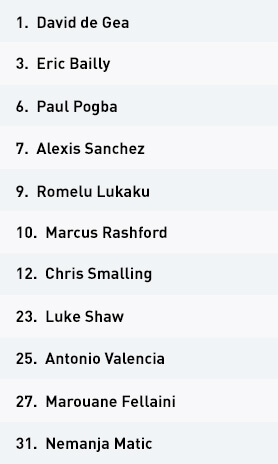 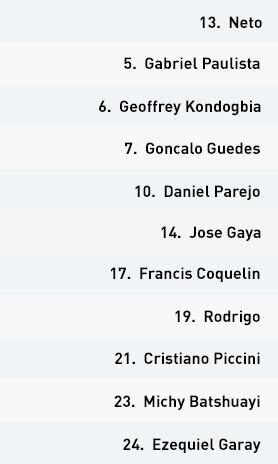 Jose Mourinho continued with the 4-3-3 structure which proved successful in Manchester United’s opening Group H victory against Young Boys, but made four changes to the line-up. Antonio Valencia and Eric Bailly replaced Diogo Dalot and Victor Lindelof in defence, while Marouane Fellaini and Marcus Rashford took the respective places of Fred and Anthony Martial in midfield and attack.

With no shortage of possession in the opening stages, full-backs Valencia and Luke Shaw stepped higher against the visitors’ early mid-block. Nemanja Matic was the single pivot, as his central midfield partners, Fellaini and Paul Pogba, moved into the next line, occupying the spaces between Valencia’s central and wide midfielders. Rather than making use of their three-on-two central midfield overload, they built in the wide areas, with Alexis Sanchez and Marcus Rashford created full attacking width. They initially looked for balls in behind their opponents’ high back line, where Rashford, Sanchez and Lukaku were all worthy runners, easing past slow-turning defenders.

As the first half progressed, Valencia’s two strikers dropped very deep, helping to form a compact low block within their defensive half. This nullified the opportunity for United to make use of the central overload, as Michy Batshuayi and Rodrigo blocked the space and access between Matic and his two midfield teammates. United then stopped playing aerial passes in behind the defence, as space between the back line and goal had become much more limited.

Matic eventually progressed his own individual movements towards the left side, rather than remaining as a central pivot. His new positioning – almost as a false full-back – allowed Shaw to move higher along the left and occupy right midfielder Francis Coquelin. Rashford could then move inside and attack the space between the right-back and centre-back, troubling two defenders simultaneously. With this structure now in place, Valencia’s right-sided forward Rodrigo was drawn to Matic – this created more central space for Pogba and Fellaini to receive and link with Rashford in the inside channel.

While this rotation helped create more central space, Pogba and Fellaini still lacked the overload needed to take complete control of the midfield. Sanchez started to help with this, as his inside movements from right to centre allowed Antonio Valencia to push higher and provide the attacking width, in turn re-establishing a three-against-two overload.

This pattern of rotation, though, eventually opened up space for the visitors to counter on their left side. Their higher positioning created a starting point from which they could drive forward after a midfield regain, and United had to contain an immediate spell of pressure in the opening period of the second half. With both central defenders pinned back by much higher-positioned strikers, space was created for Goncalo Guedes to cut inside from the left on to his favoured right foot and shoot. Few efforts troubled David de Gea, but United’s lack of control and inaccuracy in possession created needless turnovers and losses of possession in midfield.

United naturally remained in defensive mode and struggled to create any chances. With the exception of a flurry of attacking corners, they looked devoid of quality and invention, reverting to long balls forward into Lukaku and Fellaini. Aiming to win the first contact, they would work the ball into Sanchez on the right side, who looked to cross the ball into the penalty area for Lukaku, Fellaini and the late-arriving Pogba to attack. Valencia reacted to this approach by dropping their midfield deeper to nullify the threat of any long balls forward, and United duly found it harder to regain the ball after winning the initial header. Jose Mourinho’s men continued to favour this approach, however. The high positioning of their opponents’ full-backs meant they could continue to send the ball long, as they now had space for runners in the wide areas to link with the isolated Lukaku.

Pogba’s forward passing was inaccurate and poorly timed. His relationship with Lukaku rarely had an impact, with the France international seldom connecting with his striker during moments of transition. Sanchez, who was also poor on the night, was eventually replaced by Anthony Martial, with Rashford moving to the right, but this change added only a hint of directness and had little effect on the quality of United’s attacking play. Rashford’s curling free-kick from the tightest of angles grazed the crossbar in the closing stages, but this was the closest United came to grabbing a winning goal.

Valencia made four changes from their Group H defeat at home to Juventus. In defence, Cristiano Piccini and Ezequiel Garay returned, replacing Ruben Vezo and Jeison Murillo. They continued with their 4-4-2 formation, however, with Francis Coquelin and Geoffrey Kondogbia selected ahead of Daniel Wass and Carlos Soler in midfield.

In setting up with two central midfielders against their opponents’ three, Valencia tried to even up the central numbers when in possession. One of Michy Batshuayi or Rodrigo would drop short from the top line to add an extra body, creating a central three-on-three – but this resulted in the remaining striker being outnumbered two-on-one against the hosts’ central defenders. This resulted in a struggle to break the line into the higher striker’s feet and build off the subsequent pass.

They eventually adapted by leaving both strikers high to occupy the central defenders, which in turn left Marouane Fellaini free to press higher up the pitch from his right central positioning. Left-side centre-back Gabriel Paulista stepped out of his back line ever so slightly, encouraging Fellaini to continue his press still further away from the central spaces. Quick incisive passing moved the ball away from the midfielder and back into the central lane where, without his presence, Valencia again had equal numbers.

Despite this progress, inside movements from wide midfielders Coquelin and Guedes recongested the central spaces. United’s full-backs then tucked inside to form a very compact back line – from here, the visitors struggled to penetrate, with too many bodies from both sides blocking access to the goal. Rotations in their midfield did create the opportunity for counter-attacks from deep, however. With United right-back Antonio Valencia’s higher positioning, space was now available for the pacy Guedes to exploit – although United were intelligent in their recovery runs and in recognising Guedes’ desire to cut back inside on to his stronger right foot.

Central striker Rodrigo started the second half much higher than in the first, pinning back the central defence – this created more space in front of the hosts’ back line, which enabled Guedes to drive inside from the left wide area and into less traffic. Batshuayi continued his role of occupying the remaining central defender (usually Eric Bailly) to allow Guedes to shoot on goal without the central defence closing him down. The visitors were far more direct in possession throughout the second half, but their play still remained on the floor, as they progressed the ball from back to front with impressive efficiency.

As United pumped more aerial balls forward, Valencia’s midfield was forced to drop deeper when out of possession. By providing extra numbers around the area of the first and second balls, they could deal with this directness far easier. This did reduce the quantity of forward runners and passing options available, however, disturbing their vertical passing strategy. Recognising this, full-backs Jose Gaya and Piccini moved higher to compensate for a lack of forward passing options – this then allowed Guedes and Coquelin to roll inside, creating a more consistent overload within central midfield. This left space for the hosts’ to hit on the transition, with Valencia now the team vulnerable to the counter-attack – as United had been earlier in the game. Neither side possessed the quality to take advantage on the night, however.

United poured numbers forward in the closing moments, which left spaces for Valencia to attack after a regain deep in their half. The runners in behind often received passes facing the corner flag rather than heading through on goal, however. This lack of direction and disguise on the final ball ensured the game finished goalless.