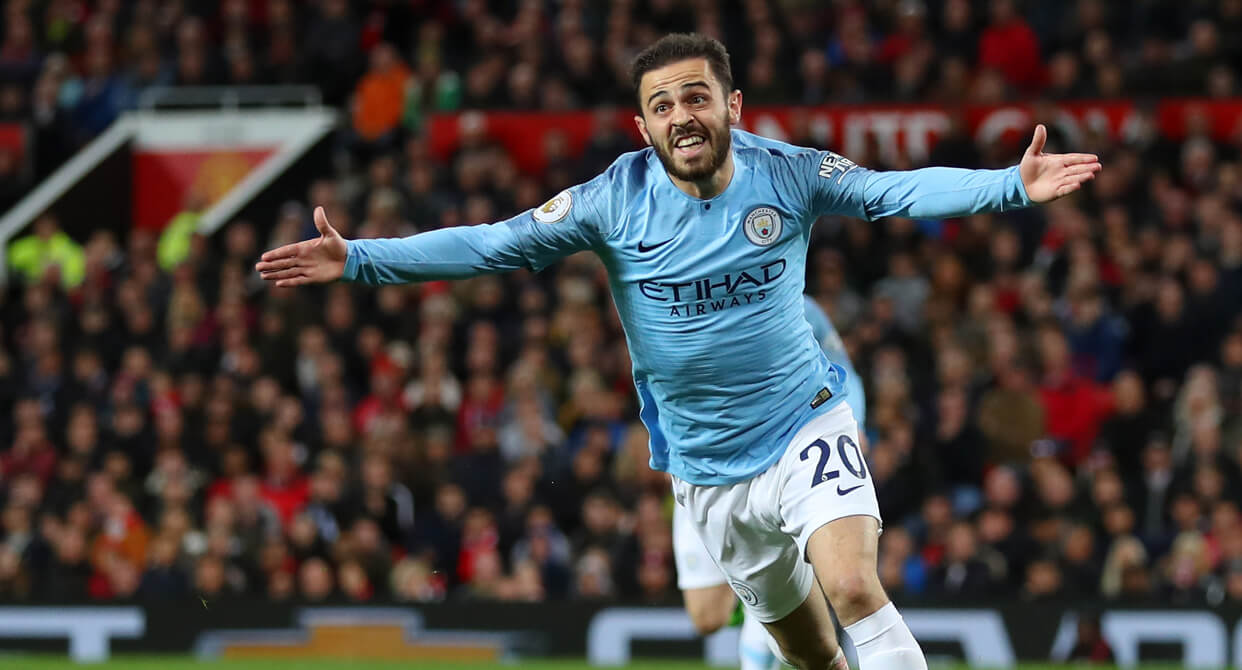 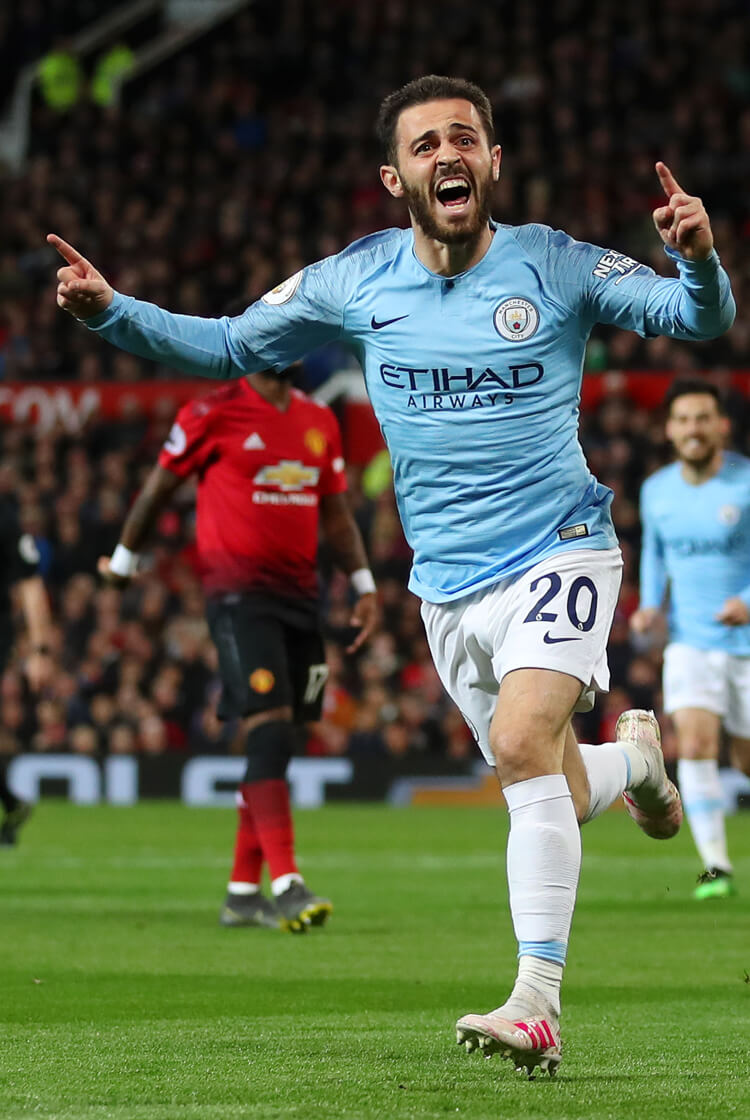 Manchester City strengthened their grip on the Premier League title race with an ultimately comfortable victory over neighbours and rivals Manchester United at Old Trafford. Pep Guardiola’s side started the match knowing that only a win would take them back above Liverpool with three games to go, but in the early stages Ole Gunnar Solskjaer’s hosts looked determined to banish the memories of the weekend’s horror display at Everton. City grew into the game, however, and early in the second half they took the lead when Bernardo Silva – who had moved into a more central role after the withdrawal of the injured Fernandinho – cut inside from the right and drilled an early shot past David de Gea. The United goalkeeper was perhaps at fault for City’s first, but definitely so for the visitors’ second just over 10 minutes later when failing to stop a Leroy Sane effort after good work from Raheem Sterling. The City machine rolls on, while United are left to fight for a top-four spot that is currently out of their hands. 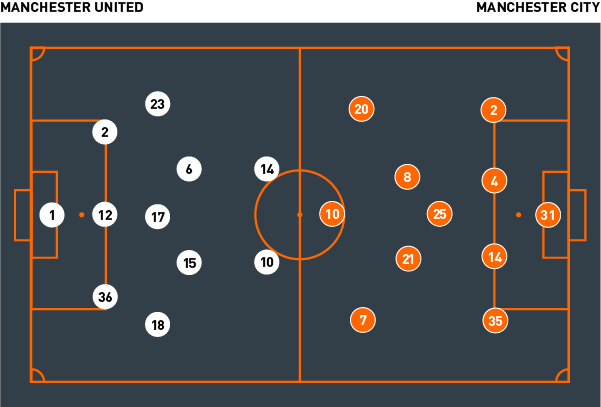 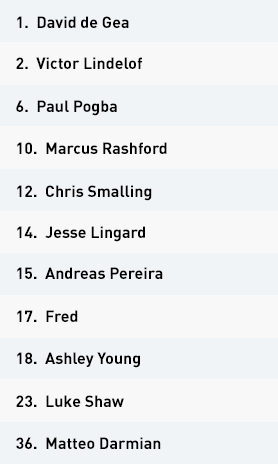 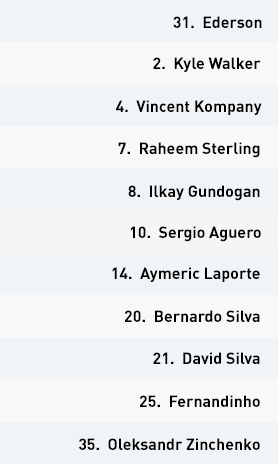 Manchester United set up in a 3-5-2 attacking structure, with Jesse Lingard and Marcus Rashford as the two highest forwards. The hosts were initially more threatening during movements of transition, with their local rivals dominating possession as usual. Rashford’s higher positioning proved a useful outlet, as his runs in between Vincent Kompany and Kyle Walker gave United an opportunity to exploit Manchester City’s higher defensive line. Rashford’s superior pace meant he could beat both Aymeric Laporte and Kompany in a footrace to passes in behind.

The wider positioning of advanced central midfielders Paul Pogba and Andreas Pereira during longer spells with the ball allowed for diagonal forward passes to match these runs from Rashford, and later Lingard. City goalkeeper Ederson’s usual high starting position reduced the angle of any subsequent shots or through balls, however, and as the game progressed United were hindered by Fred’s inability to receive and bounce under pressure from his position as the single pivot. Pogba’s higher positioning in the second half helped create more effective penetrations for the hosts, and his link-ups with the dropping Lingard gave City brief issues with the central lane – especially after they lost the defensive nous of Fernandinho to injury.

Lingard had a great chance to level the game after Bernardo Silva’s opener, but he was put off by Kompany’s attempted acrobatic clearance. City’s lower block subsequently helped contain United’s best spell of pressure, as they lacked quality combinations to play through the central congestion. The home side also lacked enough height in the wider areas, with Luke Shaw and Ashley Young rarely pushing ahead of the ball and into advanced crossing positions.

Out of possession, United pulled wing-backs Young and Shaw into a back line of five, with Pogba and Pereira assisting Fred in central midfield. This 5-3-2 made it difficult for City to create chances in the first half, especially as the visitors looked to attack with maximum width provided by Raheem Sterling and Bernardo Silva. Should either beat their opposing wing-back, United could push a central defender across while still having plenty of cover in the central lane.

The reserved positioning of Shaw and Young in possession ensured that Guardiola’s men were somewhat restricted on the counter-attack and instead had to build with patience. As City pushed their units higher to build with shorter passes, United’s ability to themselves counter-attack in behind from a compact deep block grew – although they lacked the quality and numbers to ever cause the visitors any consistent issues.

City’s movements and rotations caused the hosts major problems in the second period, as Bernardo Silva’s central fluidity off the ball gave them options to build in front of United’s midfield three. From here, Sterling and substitute Leroy Sane’s wider dribbles pulled the wing-backs further away from the back line, with both Bernardo and David Silva then freer to attack the subsequent spaces around United’s central defence. It was a low drive from the former after cutting inside from the right that saw United fall behind, with Sané’s crucial second soon after a final nail in the coffin of the hosts’ hopes.

Pep Guardiola set Manchester City up in a 4-3-3 structure in attack, with left-back Oleksandr Zinchenko moving inside during their deeper build. He joined Fernandinho behind the hosts’ first line of pressure – Marcus Rashford and Jesse Lingard – as City’s now back three spread to play around if the hosts forwards blocked off central access. Whenever the pair split, Man City found the Zinchenko-Fernandinho double pivot to progress the ball centrally. David Silva would then move to the left side, dragging a central midfielder with him.

Zinchenko’s positioning worked to create a four-against-three overload in midfield, but the visitors lacked any real threat on goal as United’s back line of five remained compact around the penalty area. There was little or no space for Sergio Aguero to combine with Raheem Sterling and Bernardo Silva, and when either winger drove inside they just found more traffic. Zinchenko eventually shifted back into his more traditional left-back position and offered an overlap around Sterling, with Kyle Walker doing the same on the right. This opened up more central space for David Silva and Ilkay Gundogan in midfield, but also left City more exposed to counter-attacks and runs in behind from Rashford in particular. The visitors did create one major chance in the first half, with David Silva’s use of the increased space and slick combinations freeing up Sterling in the box – but his shot was held by David de Gea.

Injury to Fernandinho forced Guardiola to introduce Leroy Sane on the left wing early in the second half, with Sterling switching to the right and Bernardo Silva to a central midfield role. The visitors immediately looked more dangerous, with their wide attackers now pulling the United wing-backs away from their previously compact back line. This led to more space in the inside channels, and it was from here that Bernardo Silva finished for City’s opener only moments after the change. The visitors’ fluid movement and rotations started to drag the United defence apart; Aguero’s shot hit the post moments later, before Sterling played in Sane to thrash a second past De Gea’s admittedly poor attempt at saving with his feet. With that, the three points were secured.

Off the ball, City dropped into a 4-1-4-1 structure, but their dominance of possession ensured most of their defensive work occurred during moments of transition. The initial double pivot of Zinchenko and Fernandinho blocked off any central passes after they lost possession, which forced United to play over and beyond for Rashford or Lingard to chase. With the pacy Kyle Walker eventually moving into a narrower defensive position to cover any transitions featuring Rashford down the City right, United looked to the opposite flank to attack – but Aymeric Laporte was generally adept at dealing with early balls, leaving Ederson relatively untested in the City goal.

The visitors eventually pushed into a higher press and shifted to a 4-4-2 defensive shape – David Silva joined Aguero on the top line as Fernandinho moved higher to increase the pressure on the United midfield, and Fred in particular. With the reliable Brazilian withdrawn injured in the second half, and Paul Pogba pushing further forward, United improved their movement of the ball into their forwards’ feet. Jesse Lingard’s great chance to equalise at the far post served notice of this extra threat, but the visitors soon scored their second and dropped into a lower block to see the game out.