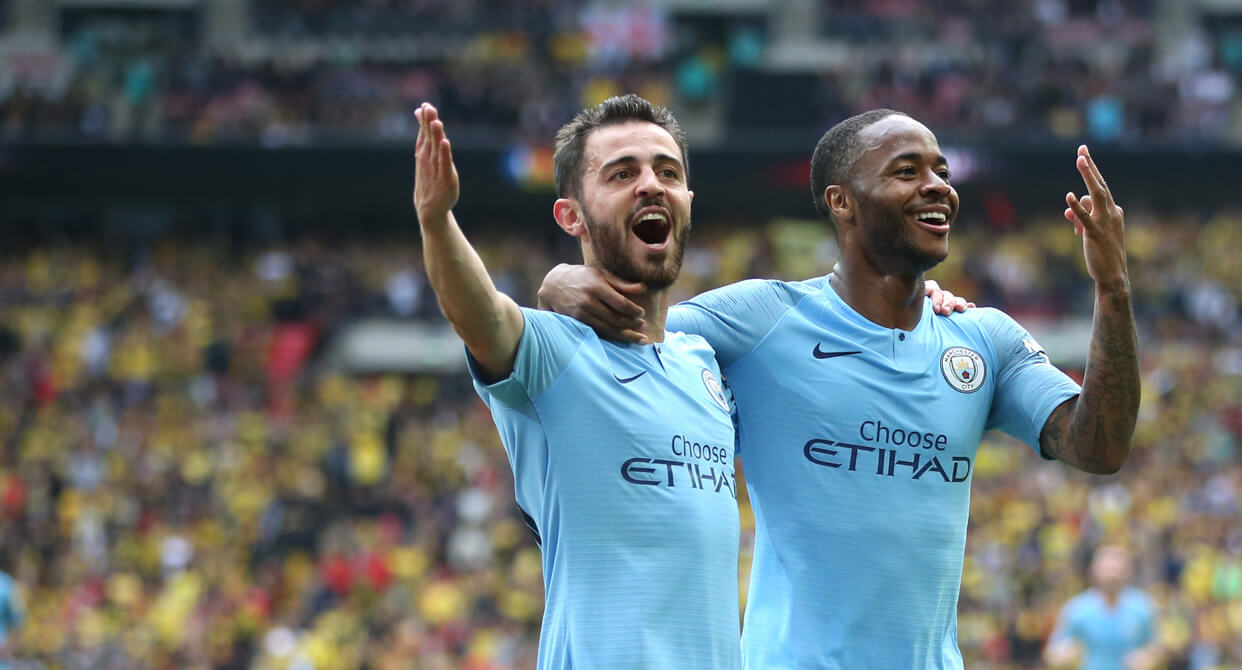 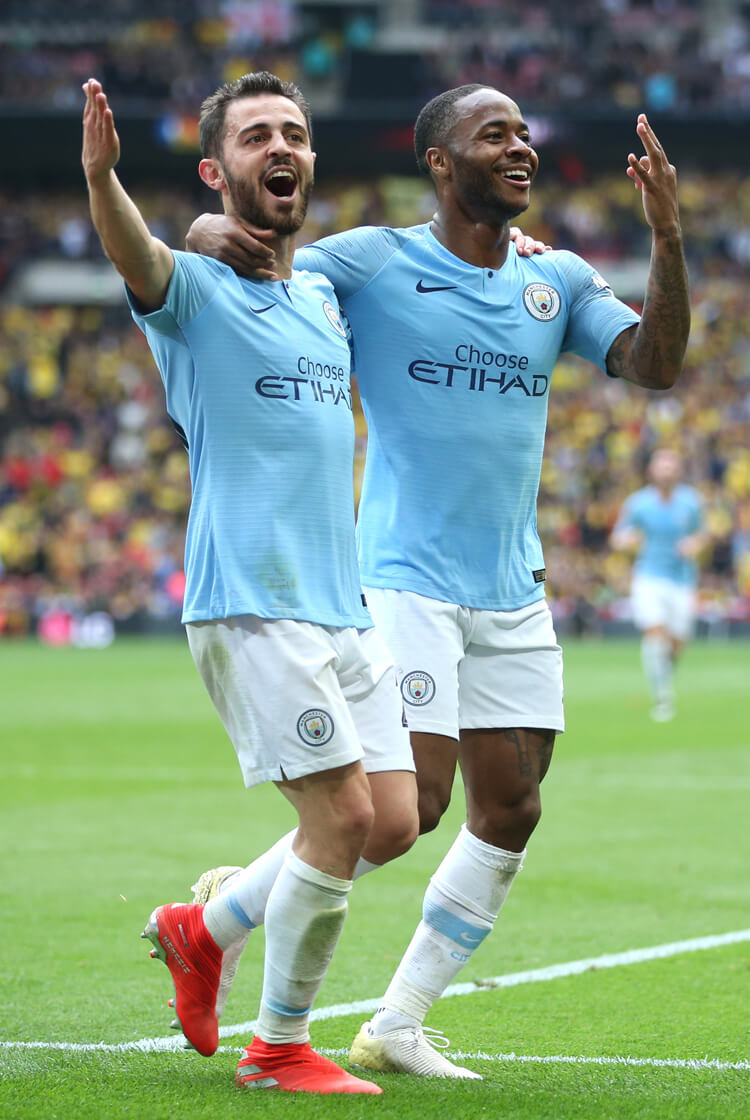 Pep Guardiola’s impressive Manchester City secured an unprecedented domestic treble in English men’s football with a convincing 6-0 FA Cup final victory over Watford at Wembley Stadium. City had already racked up the League Cup and Premier League double, and their third major trophy of the season was never in doubt once David Silva had opened the scoring on 26 minutes. The Hornets had their chances – Roberto Pereyra was denied superbly by Ederson when the score was still 0-0 – but Gabriel Jesus doubled the lead late in the first half and City ran riot after the break. Substitute Kevin De Bruyne struck their third just past the hour, with Jesus netting a second and Raheem Sterling hitting a late double to complete the rout. 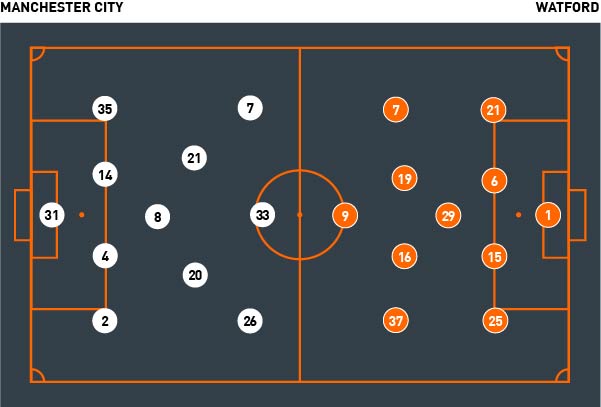 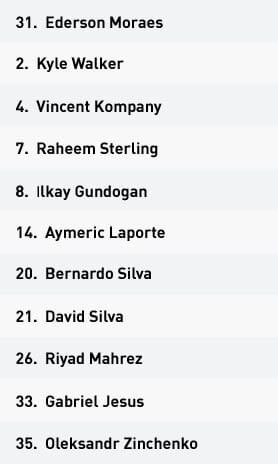 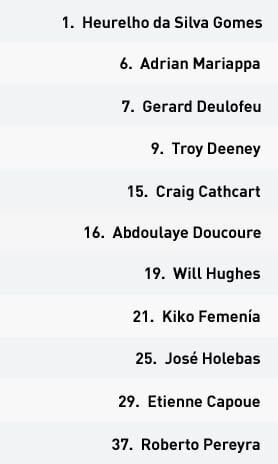 Pep Guardiola lined his Manchester City team up in a 4-3-3 formation in possession, with Ilkay Gundogan at the base of the midfield. Full-backs Oleksandr Zinchenko and Kyle Walker pushed forward to support Gundogan, allowing both Bernardo and David Silva to push high in what almost looked like a front five at times. Riyad Mahrez and Raheem Sterling then provided width in very advanced positions on the wings, either side of central striker Gabriel Jesus.

Out of possession, City defended in a similar shape, pressing high and looking to force mistakes immediately after a turnover. A high percentage of their defending therefore took place in the attacking third. Bernardo Silva targeted Watford centre-back Craig Cathcart when he received the ball, often closing him down even before he received it; this ensured both Watford’s and Cathcart's passing accuracy was poor.

Gracia’s team defended very narrowly, sacrificing space on both flanks and allowing Zinchenko and Walker to adopt wider-than-normal positions. This isolated the Watford full-backs against City’s dangerous wingers – most notably Jose Holebas against Mahrez, whose unpredictability on the ball meant he had success both out wide and by drifting in on his favoured left foot.


For all of City’s technical superiority, it was the determination and desire of Sterling and David Silva around Watford’s penalty area that led to them taking the lead in the 26th minute. A second followed little more than 10 minutes later, when a superb ball from Bernardo Silva on the right found Jesus outmanoeuvring Kiko Femenia to finish beyond a struggling Heurelho Gomes.

Kevin De Bruyne’s forward running, composure and precise passing sharpened City’s cutting edge still further as soon as he arrived as a 55th-minute substitute for Mahrez – and, with spaces appearing as Watford took risks and played more expansively, City capitalised. The Belgian caused no end of trouble when rotating with Bernardo Silva on the right of the City attack, with Sterling now drifting inside from the left to add even more threat in central areas. A second for Jesus and then two finishes from Sterling meant that City became the first team since 1903 to score six goals in an FA Cup final. Rarely has the English game experienced such dominance.

Javi Gracis set his Watford team very deep in a 4-5-1 formation out of possession, which is how they spent the majority of their second FA Cup final. Gerard Deulofeu and Roberto Pereyra dropped back into the wide slots in the midfield five, while Etienne Capoue was tasked with anchoring in front of the defence. Lone striker Troy Deeney looked to press City’s pivot Ilkay Gundogan, leaving Will Hughes and Abdoulaye Doucoure with the unenviable job of tracking David and Bernardo Silva respectively.

The Hornets evolved into a 4-3-3 while in possession – although this was ultimately little more than 30 per cent across the 90 minutes – and looked to maximise their opportunities on the counter-attack. Pereyra and Deulofeu looked to break quickly, with the energetic Doucoure often carrying the ball into City’s half from midfield.

They also looked to exploit the space either side of City’s centre-backs on the counter, missing a fine chance to take the lead when Doucoure found Deulofeu in space outside Aymeric Laporte after a misplaced pass higher up the pitch from Oleksandr Zinchenko. Pereyra had only Ederson to beat from Deulofeu’s clever ball across, but City’s goalkeeper reacted swiftly to deflect his shot. In truth, Watford thereafter struggled to convince.

Two goals down at the break, Gracia pushed his side further forward at the start of the second half. Watford now looked direct to Deeney, who targeted Gundogan in the air, with Doucoure and Hughes joining attacks to offer more of a Watford threat in the final third. This gave them some momentum, but also left them more vulnerable to swift counter-attacks – and the introduction of Kevin De Bruyne for Riyad Mahrez 10 minutes after half-time changed the flow of the game entirely.

The Belgian finished calmly to put the game to bed within six minutes of arriving, and with Watford continuing to push forward – Andre Gray, Isaac Success and Tom Cleverley were all introduced in attacking areas – in search of a cup final goal, City were able to pick them off at will.