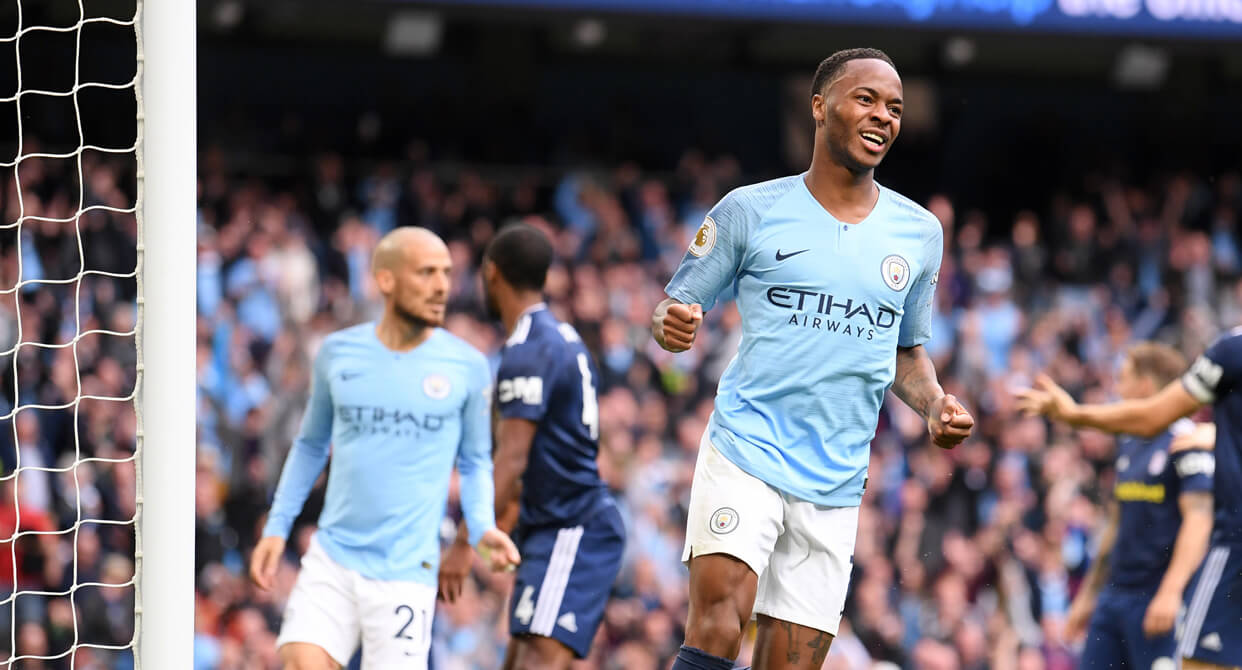 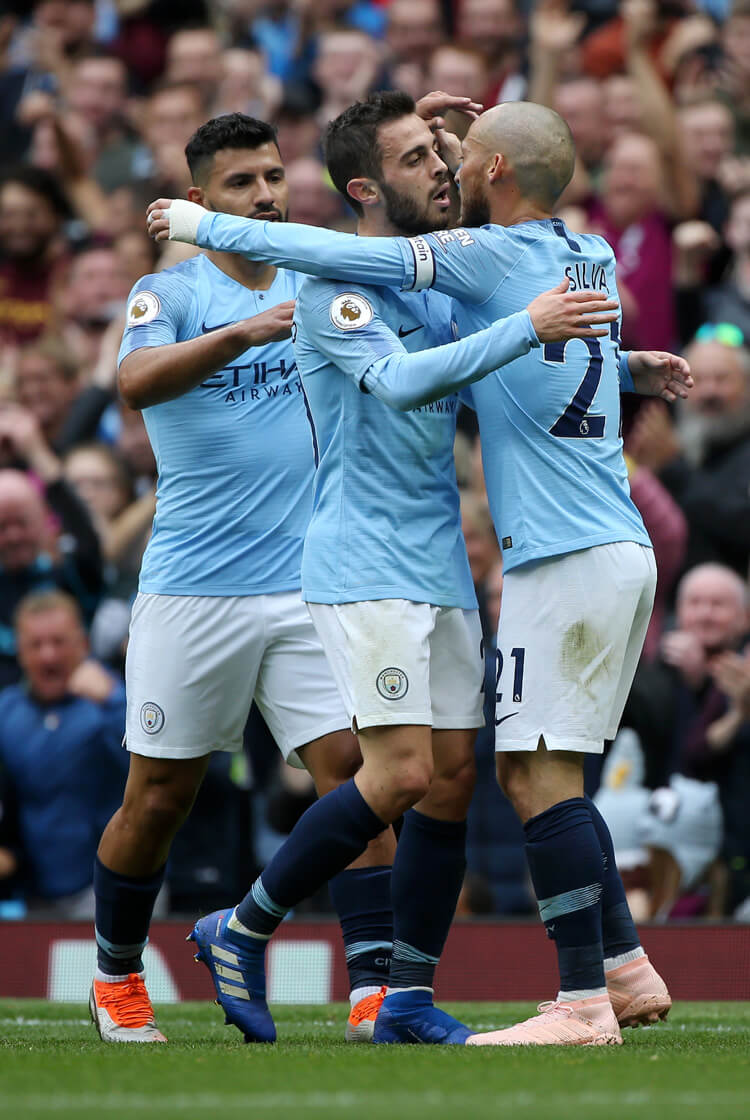 Manchester City maintained their unbeaten start to the campaign with a comfortable victory over Fulham at the Etihad. Leroy Sane was handed his first start of the Premier League season by Pep Guardiola, and repaid his manager’s faith with the opening goal of the encounter in only the second minute. David Silva doubled City’s lead midway through the second half, with Raheem Sterling securing the three points moments after the break. The defending champions trail Chelsea and Liverpool, who have taken maximum points from their opening five games, in the table and next face Lyon in the Champions League before returning to domestic action with a trip to Cardiff. Fulham are still adapting to the top flight, but showed plenty of promise against one of Europe’s elite teams. 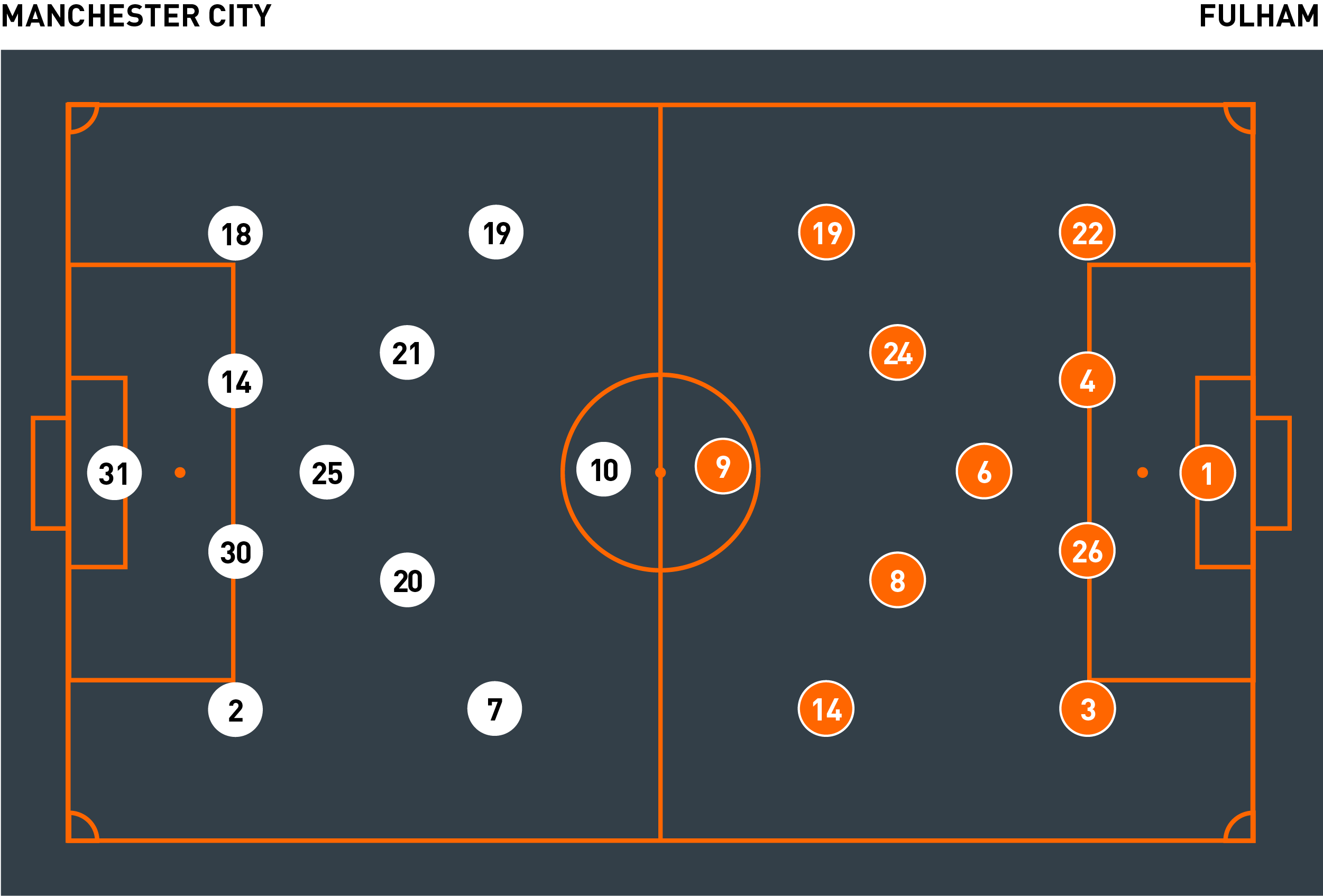 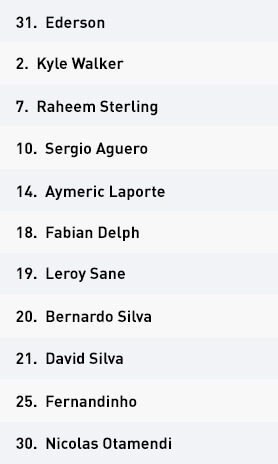 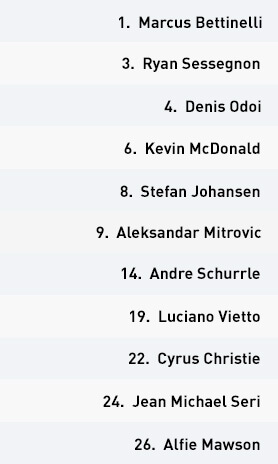 Pep Guardiola made four changes in personnel from the home victory over Newcastle. Nicolas Otamendi and Fabian Delph came into the back line, as John Stones took a seat on the bench and full-back Benjamin Mendy missed out through injury. In attack, Riyad Mahrez and Gabriel Jesus were named as substitutes, with Bernardo Silva and Leroy Sane taking up their usual roles in a 4-3-3 formation.

City got off to a blistering start, scoring from their opening attack of the game. They piled early pressure on to Fulham’s first attempt to build short from the goalkeeper, with Fernandinho surging on to a loose pass from Jean Michael Seri before crossing for Leroy Sane to tap home at the far post. With their opponents looking expansive in possession, City continued to threaten on the break. Raheem Sterling and Sane – who switched sides throughout the first half – were afforded huge spaces in wide areas.

In contrast to the system played against Newcastle, Kyle Walker and Fabian Delph rarely moved inside with the ball to play as inverted full-backs. This was largely a result of the visitors’ defensive set-up, which contained a very narrow central midfield trio and front line. By providing width in their own back line, City could build around the congested central lane and progress the ball using combinations in the wide areas and inside channel, rather than through the middle.

When in possession, Walker and Delph were aggressively pressed by forwards Andre Schurrle and Luciano Vietto – and the cover shadow of the Fulham forwards subsequently blocked off access into David Silva and Bernardo Siva. City’s central midfielders then alternatively started to drop in front of the away side’s midfield unit, rather than remaining behind it. With Fulham so occupied in blocking off the central lane, City focused on the wide areas, where Sane and Sterling were providing maximum width from touchline to touchline.

The relationship between David Silva and Sane proved particularly fruitful. Late runs forward along the inside channels from the former provided additional space for the latter to either cut inside and use the space created by the Spaniard’s movement, or play his teammate in behind. They combined well along the left, from where they created a host of chances.

Fulham briefly managed to create sustained spells of possession, as they tried to force the ball forward to their progressive full-backs. But with their back line converting from a four to a three, they struggled to cover the width of the pitch. Sane and Sterling frequently displayed their devastating speed on the break, and the latter almost grabbed his team’s second goal, only to see his effort crash back off the crossbar.

Sterling and Sane regularly swapped sides, but they looked more effective in their regular positions, with Sane continuing to combine well with David Silva on the left. They eventually grabbed a second goal, which originated from a Fulham throw-in deep in City’s half. After a quick regain and smooth build against intense pressure, their excellent short passing soon had them over halfway. The front trio occupied the entire Fulham back four, creating additional room for the likes of Otamendi to step into midfield and lure attackers away from the wide areas. Having worked their way into the penalty area, David Silva eventually smashed home from close range after some excellent work from Bernardo Silva.

Fulham’s wingers dropped deeper from their high-pressing structure into a mid-block that allowed City’s full-backs to advance higher. Sane and Sterling started to move back inside, overloading their opponents’ tight central midfield trio. The ballside winger would step infield, providing the central passing option that Laporte and Otamendi had been searching for. However, this meant they now had a far less stable structure to block counter-attacks. With Walker and Delph ahead of the ball, and Otamendi or Laporte stepping into midfield, they lacked the numbers to hamper early forward passing from their opponents.

Fulham couldn’t match the quality of the hosts in their attacking transitions, however, and City had the game wrapped up in the opening moments of the second half. Ryan Sessegnon’s cross deep inside the City half was blocked, allowing the home side to counter-attack through the now vacant left-back position. David Silva set Aguero away along City’s right, from where the striker crossed for Sterling to net the game-killing third.

The hosts made wonderful use of the third man to dominate the ball for the remainder of the encounter. As Walker received in the wide area from the back line, Sterling would step inside, allowing his teammate to travel with the ball. The ball-side central midfielder – usually Bernardo Silva in the second half – would then come tight to the ball, drawing additional defenders to both the ball and themselves. This created just enough space for Sterling to make a blindside run into the final third. Quick first-time passes between Walker and Bernardo Silva ensured regular progression into the final third.

City’s play on the left side was similarly problematic for Fulham. Delph’s inside positioning narrowed the visitors’ central structure even further, which created additional space for Sane to attack Cyrus Christie one against one. David Silva would then perform moves forward to match those of Bernardo Silva on City’s right. Combinations within the inside channel allowed for two-against-one opportunities against tiring full-backs, creating cutback crossing options as they searched for the fourth goal that perhaps surprisingly never came.

Fulham made three changes from their 2-2 draw against Brighton before the international break: they maintained their 4-3-3 structure, but Timothy Fosu-Mensah and Maxime Le Marchand were replaced by Cyrus Christie and Ryan Sessegnon in the back four, while Stefan Johansen came in for Andre-Frank Zambo Anguissa in midfield.

The away side’s intentions were clear from their first passage of play, as right-back Christie surged forward against a high-pressing midfield unit desperately trying to regain possession quickly from kick-off. With most visiting teams creating a compact low block at the Etihad, Fulham’s initial approach was admirable but damaging. Their good early progress came undone within the opening two minutes, as they were caught out trying to build short from goalkeeper Marcus Bettinelli, and Leroy Sane struck a cruel early blow from close range.

Fulham’s high back line did congest the central areas of the pitch, with the distance between their defence and central midfield drastically reduced. This high line also encouraged balls in behind for Manchester City’s speedy wide men to run on to, however, especially during moments of transition.

The visitors looked to create a central three-against-three in attack, as Luciano Vietto, Andre Schurrle and Aleksandar Mitrovic formed a very narrow front line. This naturally created space for the full-backs to surge forward, both with and without the ball. Their aggressive positioning, however, nearly gifted City a second after they lost possession inside the City half and were forced to sprint back to defend their goal. Raheem Sterling should have doubled City’s lead, with Fulham fortunate not to concede.

Mitrovic was an effective aerial target for longer balls forward from goalkeeper Bettinelli, as the visitors were forced to refrain from playing short from goal-kicks against a high, aggressive press from City’s front line. The Fulham striker won the majority of his duels with centre-backs Aymeric Laporte and Nicolas Otamendi, but lacked support from Vietto and Schurrle when it came to latching on to the second ball.

The visitors continued to limit City’s central progress, as their high line, coupled with an incredibly tight midfield trio, created minimal space between the lines. Tight spatial compactness between defence and midfield in central areas congested the likes of Sergio Aguero and Bernardo Silva, who found it difficult to combine within the right inside channel. This equated to additional turnovers of possession for Fulham, who tried to launch rapid counter-attacks of their own. But the speed of right-back Kyle Walker, combined with committed sliding tackles from Otamendi, soon curtailed any left-sided breakaway.

When Fulham did manage to create spells of possession, they looked an effective team with the ball. Utilising regular switches of play helped them avoid the aggressive counter-pressing of the City midfield unit, but a lack of patience resulted in unnecessary losses of possession. Kevin McDonald in particular forced too many central balls in behind, looking for the front three to attack the space beyond their opponents’ defence. City had little trouble in sweeping up the danger before exploiting the positioning of Fulham’s full-backs on the break.

The visitors struggled for possession after conceding a second, seemingly lacking confidence on the ball and relying too heavily on the direct ball into Mitrovic. They did have small moments of success, particularly as the back line switched the ball quickly. By luring Aguero to one side, the switch allowed the furthest centre-back to step into midfield, drawing Bernardo Silva temporarily out of shape. With Vietto and Schurrle continuing to move inside, their disguised runs infield let the ball progress through and out to the overlapping Sessegnon at left-back. City eventually won the duels deep within their defensive third, but signs of progress will have given the travelling fans plenty of encouragement for when Fulham are facing less daunting opponents.

The game ended as a contest when Sterling grabbed City’s third early in the second half. Fulham struggled to see any of the ball for large periods of the second half, as they were content to block City’s central access by forming a compact position-oriented 4-3-3 block. They eventually surrendered control of the wide areas and inside channels, as exhausted full-backs lacked the energy to defend and provide the bursting forward runs that had been their main form of attack in the opening period.