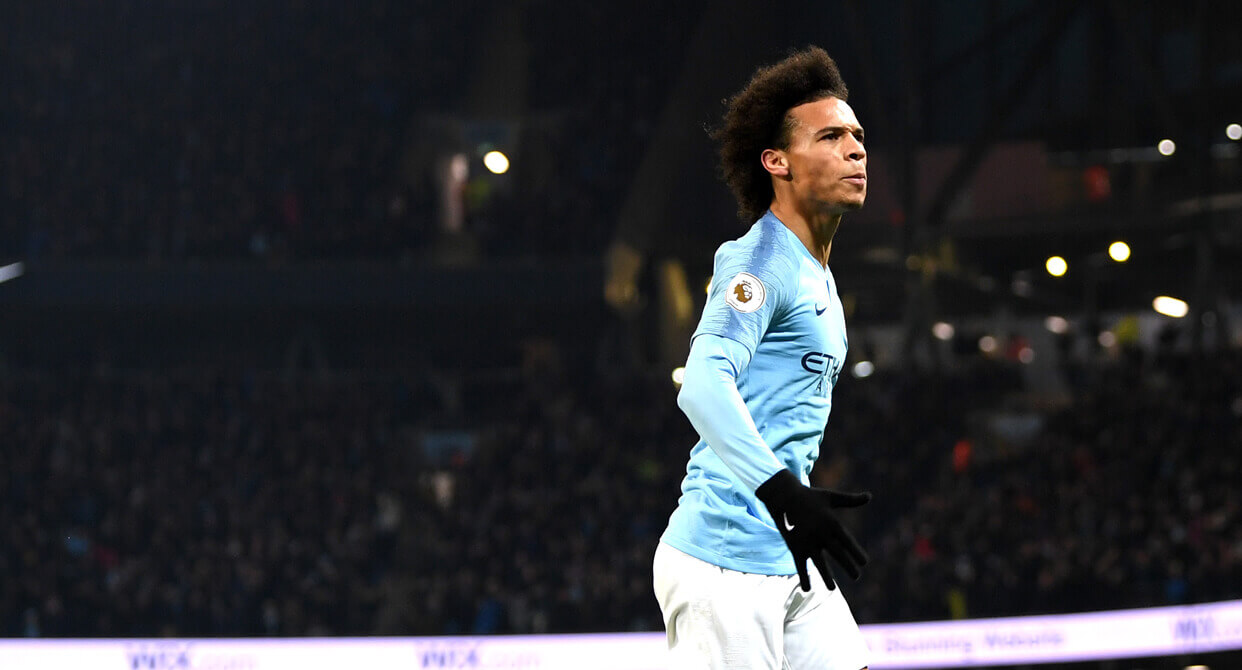 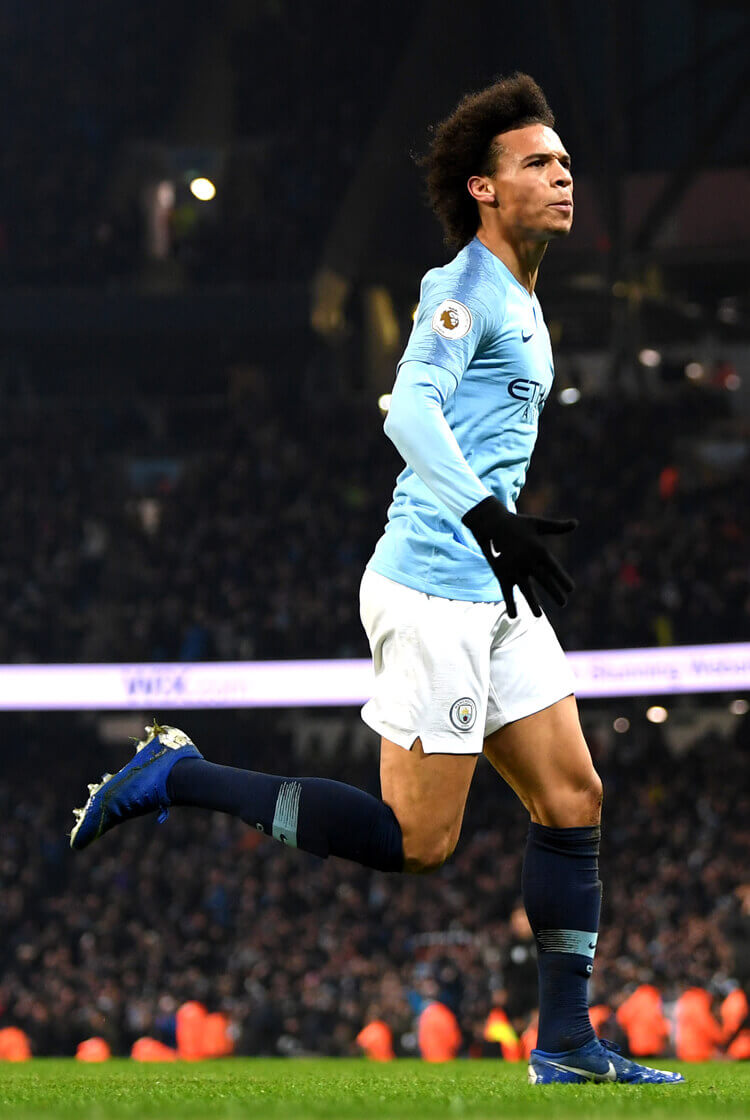 The Premier League title race is well and truly back on after an enthralling Thursday evening clash at the Etihad, where Pep Guardiola improved his coaching record against Jurgen Klopp. The Liverpool manager had warned that Manchester City are still the best club team in the world in the build-up to the match, and the hosts did their best to live up to such a reputation in a breathless encounter. The Reds should have taken the lead, however, when Mo Salah played Sadio Mane through on goal – but the latter’s shot came back off the post and, after a chaotic few seconds, John Stones cleared from the line after his first effort hit Ederson and ricocheted back towards goal. Vincent Kompany was lucky not to see red for a wild challenge on Salah soon after, and City were quick to take advantage when Sergio Aguero turned away from Dejan Lovren and thrashed his shot past Alisson. Klopp changed his approach in the second half, and it looked to be working when his full-backs combined to assist Roberto Firmino’s equaliser. But, as the Reds continued to push, City had greater space on the counter-attack – and Raheem Sterling was thus able to play Leroy Sane in for a winner that went in off the far post. Liverpool now lead the Premier League by only four points, with City themselves only two points clear of Tottenham in third. Game on. 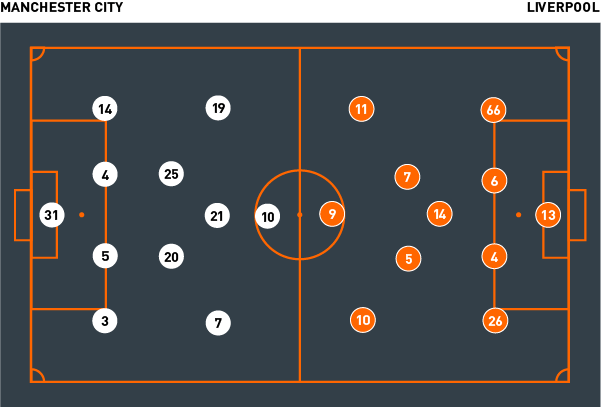 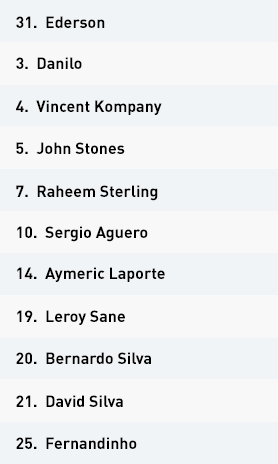 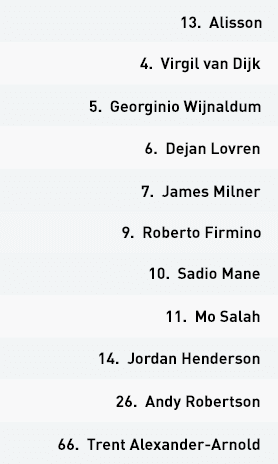 Pep Guardiola set his Manchester City team up in their usual 4-3-3 formation, with Fernandinho sitting as the deepest of three central midfielders and Leroy Sane and Raheem Sterling providing attacking width. With Roberto Firmino permanently blocking access into his Brazilian teammate, however, Bernardo Silva dropped back to support Fernandinho in what was now more of a 4-2-3-1. With full-backs Aymeric Laporte and Danilo both staying deep, the hosts had fewer players ahead of the ball than is usual for them – much of their early possession was on the wrong side of the halfway line.

City could have exploited their right flank more in the opening 30 minutes, with Raheem Sterling enjoying more space than the heavily marked Leroy Sane on the left. Fernandinho’s switches in behind twice showcased this, with David Silva unable to turn Sterling’s cross home on the second occasion.

The hosts’ patient build-up play led to most success when it drew one of Liverpool’s wide attackers, Sadio Mane or Mo Salah, inside towards the centre-backs. From here, they used chipped passes over to their full-backs, which forced Liverpool to move one of their midfielders towards the ball. This became an effective pattern of play; with Liverpool now only having two midfielders in the central lane, Sergio Aguero could drop and become more involved in his team’s penetration into the final third. The Argentine’s securing of the ball and overall play was superb in the first half; he linked brilliantly with both wingers and eventually scored the opener with a wonderful bit of movement and thunderous finish after yet more excellent work from the tireless Bernardo Silva.

Bernardo’s higher movements early in the second half helped Sterling drop shorter for the ball, which dragged Andy Robertson out of shape for the first time and gave Danilo space to overlap – but the hosts remained wary of Liverpool’s threat on the break and were happy to dominate possession until Jurgen Klopp shifted the visitors from their initial 4-3-3 to a more attacking 4-2-3-1 formation. This led to Liverpool’s equaliser, but as they continued to push their strategy played into City’s hands. With the Reds now more vertically stretched, Danilo was able to find Sterling in a much higher position – another superb run from Aguero took Trent Alexander-Arnold with him, with Sane free to receive Sterling’s pass and strike home off the far post. In a game of acutely fine margins, the German’s shot bounced the right side of the line, just as Mane’s first-half effort had not.

Out of possession, City utilised a 4-2-3-1 structure and aggressively pressed Liverpool’s back line. Both Sterling and Sane locked on to their respective full-backs, with Aguero often isolating Virgil van Dijk. This left Dejan Lovren, whose distribution was inconsistent throughout, as Liverpool’s free man in the back line.

Bernardo Silva’s aggression and ability to effectively regain possession for the hosts was impressive; The Portuguese international would aggressively step on to Jordan Henderson, who was frequently Liverpool’s deepest central midfield pivot, in what mostly resembled a 4-1-4-1. With the superb Fernandinho sweeping up behind, Liverpool struggled to create anything during moments of transition despite Salah and Mane taking up intelligent counter-attacking positions in the inside channels.

With David Silva eventually applying more pressure on to Lovren, Georginio Wijnaldum became Liverpool’s free player – but the visitors rarely established enough control in possession to utilise the Dutchman in an advanced position. The one real moment they did so, his combination with the dropping Salah penetrated City’s mid-block and led to both Mane and the unfortunate Ederson millimetres short of seeing Liverpool into the lead.

The hosts were much more defensive in the second half, and worked tirelessly during moments of transition to stop Liverpool counter-attacking. Unselfish and consistent running from Aguero, Bernardo Silva, Fernandinho and Sterling ensured that their mid-block formed immediately if they were unable to counter-press. This was perhaps the decisive factor in City conceding only once – an unusual foundation for a Pep Guardia victory.

Jurgen Klopp set Liverpool up in a 4-3-3 formation, and chose an industrious central midfield trio of Jordan Henderson, Georginio Wijnaldum and James Milner. This meant tireless pressing, but offered few attacking combinations or penetrations in a first half played at a ferocious tempo.

From their first real spell of controlled possession, however, Liverpool showed why they have been so successful this season. Wijnaldum moved into a false full-back position, and his touches under extreme pressure helped Liverpool progress out of the City press. Mo Salah dropped deep centrally, with Roberto Firmino moving out right to occupy Aymeric Laporte. A brilliant one-two between Salah and Firmino penetrated City’s central unit, with Sadio Mane unfortunate to see his low effort bounce back off the post before John Stones and Ederson almost combined to put the ball in their own net.

Diagonal runs inside from Mane proved a useful outlet for the visitors, with Stones tracking his movements in behind. From here, Liverpool had the option of penetrating with direct through balls, if their central midfield could work the ball into their rotating front line more often. Vincent Kompany was either static to these passes, or stepped up to press the ball as Firmino or Salah dropped. This created a central gap for Liverpool to target, but their deeper midfielders failed to work the ball into their front line enough – largely due to relentless counter-pressing from their direct opponents.

A large part of Liverpool’s attacking strategy in the first half was to remain patient in defence and explode away from any mistake in the City build. However, this only works if the team in possession makes those errors; only once did the hosts look uncomfortable in their own half in the opening period, with Kompany’s controversial sliding tackle on Salah killing off any potential break.

Klopp’s team needed to become more proactive in the second period, and they did. The manager’s early change to an attacking 4-2-3-1, with Fabinho replacing Milner and joining Henderson in a double pivot, changed momentum. Mane moved across to the right, with Salah as the central forward running in behind and Firmino now a permanent fixture in the number 10 role. Wijnaldum now moved inside from the left side of the attacking midfield three, as Liverpool created longer spells of attacking possession with more men ahead of the ball. The change also ensured that the second half was played at an equally electric pace to the first.

With two midfielders now protecting the centre-backs, and both Mane and Wijnaldum making runs inside, the Liverpool full-backs had much more licence to push high and attack in wide areas – which also increased the possibility of switches. This was all in evidence as the visitors equalised – Trent Alexander-Arnold’s perfect diagonal ball got Andy Robertson in behind the City back line, and the Scot’s first-time cushioned ball found Firmino free to head home from close range. This was as good as it got for the Reds, however, as despite their late dominance of the ball – and sending Virgil van Dijk forward – they were unable to break City’s low block and fell to a first league defeat of the season.

Without the ball, Liverpool utilised a 4-3-3 mid-block, with Salah blocking off access into Laporte. Firmino pressed Stones much more than Kompany, as Liverpool clearly wanted the Belgian centre-back to distribute the ball into midfield. Leroy Sane was too tightly marked to make the most of any aerial pass forward, while the tireless work of Liverpool’s central midfielders ensured progress was limited if Laporte or even David Silva received the ball.

Alexander-Arnold’s increasingly tight marking of Sane meant Liverpool’s defensive unit shifted slightly to their right to support him. This naturally increased the space on Liverpool’s left, where former Red Raheem Sterling maintained full width for the hosts. But City rarely took advantage of the switch, where Andy Robertson would have had to deal with defending an enlarged space.

With City dropping Bernardo Silva deeper to maintain an overload in the first stage of their build, and fixing their full-backs in the defensive line, the majority of Liverpool’s defensive work was simply to press and screen. They did this magnificently well for long periods – in the end, it was Bernardo’s awareness and desire to pounce on to the loose ball ahead of Liverpool’s midfield that led to Sergio Aguero hammering the hosts ahead in the first half.

Liverpool’s mid-block continued well into the second half, but once Klopp had adjusted his attacking approach Manchester City started to look effective on the break. Naturally, the hosts looked to the spaces left by Liverpool’s advancing full-backs, with Robertson’s high positioning on the left an obvious target. In the end, Liverpool couldn’t break down the home side’s defensive block, and fell to an accurate low strike from Sane after excellent work from Sterling on the right and a superb decoy run from Aguero in the middle. Liverpool may have lost the game and their unbeaten record, but they played their part in a sensational encounter and remain top going into an FA Cup weekend.