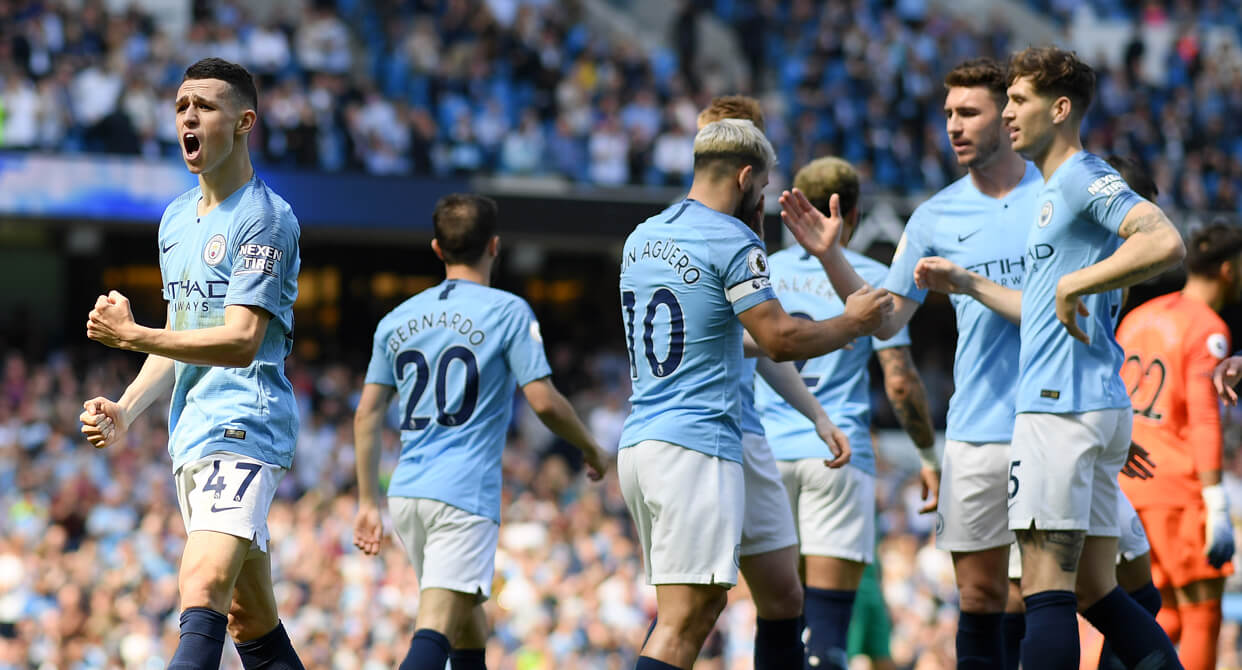 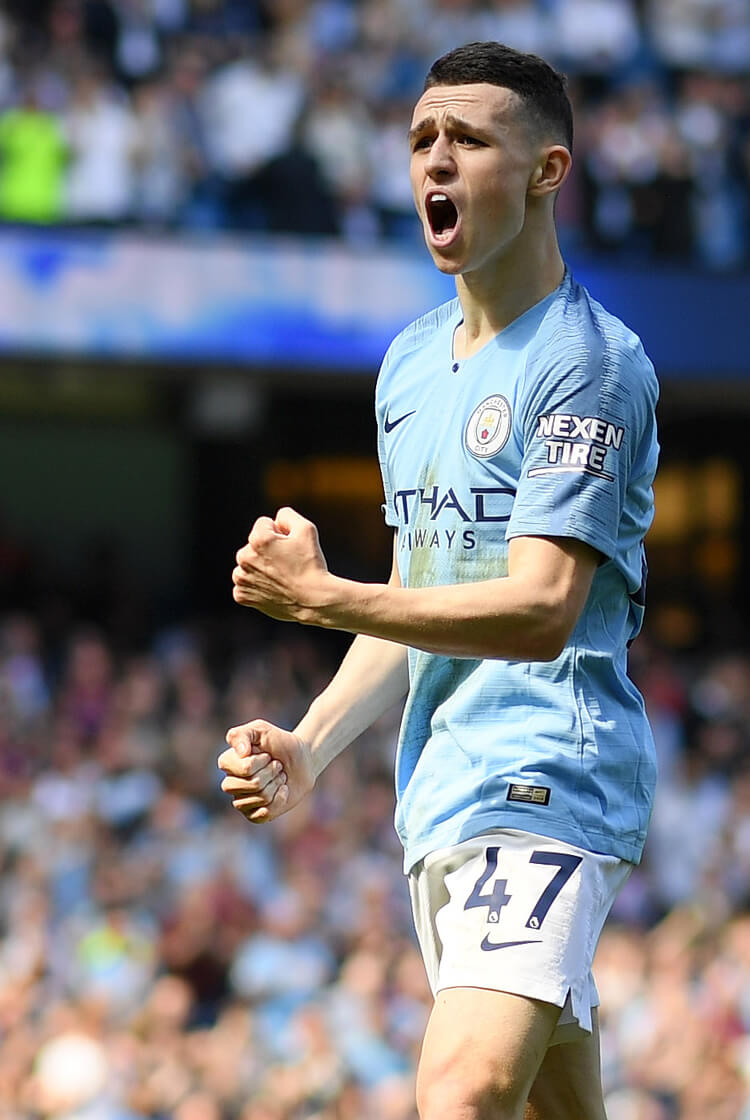 Manchester City kept the destiny of the Premier League title in their own hands with this narrow, tense victory over Tottenham at the Etihad. Three days after the two teams had met at the same venue on what turned into a dramatic Champions League night, they reconvened for an equally important Premier League clash. Both Pep Guardiola and Mauricio Pochettino made changes to their teams for the Saturday lunchtime kick-off – and it was one of the new boys, Phil Foden, who stole in at the back post to nod in his first Premier League goal after superb work from Bernardo Silva and Sergio Aguero. Spurs had their chances to equalise, with both Lucas Moura and Son Heung-min drawing superb saves from Ederson, while both teams had legitimate penalty claims turned down by referee Michael Oliver. Neither side could quite recreate the form of Wednesday evening, but City did enough to hold on for a huge three points and inch one step closer to retaining their title. 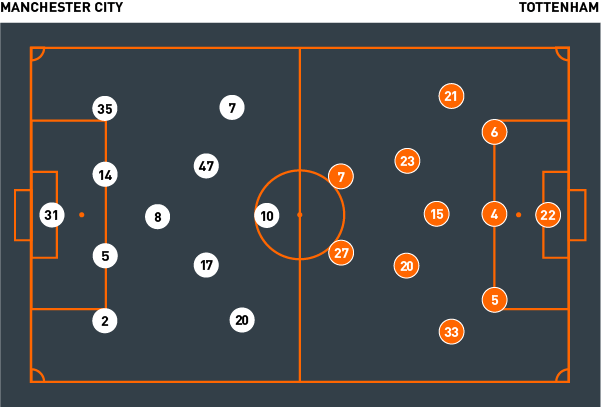 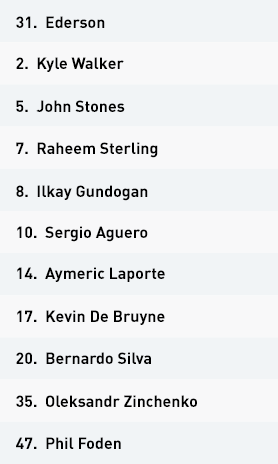 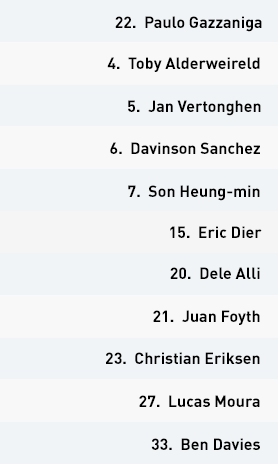 Pep Guardiola set Manchester City up in a 4-1-4-1 formation, with Ilkay Gundogan operating between the defensive and midfield lines. Kevin De Bruyne and Phil Foden were the inside attacking midfielders, while Raheem Sterling and Bernardo Silva stretched the pitch horizontally behind lead striker Sergio Aguero.

The hosts found the midfield extremely congested, with Tottenham operating with a narrow central three and three central defenders behind that. City thus looked to the half-spaces and wide areas to create opportunities. With Christian Eriksen and Dele Alli looking to affect full-backs Oleksandr Zinchenko and Kyle Walker, and Juan Foyth and Ben Davies tracking Bernardo Silva and Sterling, City utilised rotation between their full-backs and centre-backs to get the latter on the ball with space to drive forwards. They achieved this by pushing Zinchenko or Walker inside to compact the Spurs midfield further, opening up space outside – which City could exploit simply by a switch of play. This rotation could also extend to the inside attacking midfielder dropping into the wide area, effectively creating a two-on-one: De Bruyne and Walker against Alli on the City right, Foden and Zinchenko against Eriksen on the left.

The rotation would also work to get the full-backs on the ball outside the Spurs midfield. This was done by dropping the attacking midfielders deeper to occupy Eriksen or Alli. The opening of these spaces could also lead to one of City’s other areas of focus, which was to isolate Bernardo Silva and Sterling against Davies and Foyth, looking to beat them and either cross or cut back. Beyond City’s early goal, when Bernardo cut inside to cross for Aguero to set up Foden, the Tottenham full-backs and centre-backs dealt well with this approach. Overall, City struggled to break down an organised and compact Spurs defence; they found space severely restricted and failed to create many chances of great significance.

Out of possession, the hosts looked to set up in more of a 4-3-3 shape, and would operate in a high press, looking to regain the ball as close to the Tottenham goal as possible. The front three of Sterling, Aguero and Bernardo Silva would be matched up against the Spurs back three. Depending on which side the ball went, the far inside attacking midfielder would lock on to Eric Dier at the base of the Tottenham midfield, while the nearside attacking midfielder would look to affect his opposite number – Alli or Eriksen. The City full-backs would press the Spurs wing-backs as the ball travelled towards them, while centre-backs John Stones and Aymeric Laporte would remain deep with Son Heung-min and Lucas Moura – going two against two at the back was potentially risky, but it allowed City to utilise such an aggressive press.

The press was regularly successful, often operating in turnovers high up the pitch or mistakes from the Spurs players in possession. When the visitors did manage to play out, it tended to be when Alli or Eriksen dropped towards the ball and were not tracked by Foden or De Bruyne. The deepest of the midfield three – Gundogan and later Fernandinho – was responsible for tracking any dropping movements from Son or Moura, and ensuring they couldn’t receive the ball to feet.

Mauricio Pochettino set Tottenham up in a 3-1-4-2 structure in possession, with Eric Dier positioned between the defensive and midfield lines. Wing-backs Juan Foyth and Ben Davies pushed up in possession to provide width in attack, while Christian Eriksen and Dele Alli operated inside, just behind the attacking partnership of Son Heung-min and Lucas Moura.

The visitors conceded possession for the majority of the game. As a result, they looked to play mostly on the counter-attack, with their defenders and midfielders looking to play early passes in behind for Son and Moura – a strategy that had proven effective in their midweek Champions League clash and would again lead to several opportunities in this game.

When Spurs had good possession, one of Son or Moura would drop towards the ball, looking to drag opponents with them and open up space in behind for the penetrative runs of Eriksen and in particular Alli. Stones was caught out on a couple of occasions, tracking Son deep and leaving the space behind. When building from the back, Tottenham would try to drop Alli and Eriksen towards the ball to see if Foden or De Bruyne would follow. The City midfielders were inconsistent in following in the early stages, but became more disciplined as the game progressed – from which point Spurs struggled to build in this way.

Out of possession, Spurs set up in a 5-3-2 and operated in a mid-low block. Foyth and Davies joined centre-backs Davinson Sanchez, Toby Alderweireld and Jan Vertonghen in the back five, while the midfield trio of Eriksen, Dier and Alli tried to protect central areas behind the front two. Son and Moura would apply very mild pressure on Stones and Laporte while trying to prevent Gundogan from getting on the ball through screening.

As the ball travelled wide to Walker or Zinchenko, the outside central midfielder (Eriksen or Alli) would go and press, but try to screen the pass back inside to De Bruyne or Foden. De Bruyne adapted by moving out to a wider area as Alli moved out to press, thus opening up a passing line while Alli became visibly frustrated at the lack of cover behind him to deal with this. If De Bruyne and Foden remained inside as the ball travelled wide, then Vertonghen or Sanchez would step up to press and prevent them from turning; this didn’t extend to when De Bruyne moved wide, however. One solution might have been to push Davies up to De Bruyne and shuffle Vertonghen across to deal with Bernardo Silva, with the rest of the Spurs back line moving across one position and into a back four.

As City progressed up the pitch, the Spurs defensive line positioned themselves on the edge of the penalty area, severely restricting the space in behind for City’s preferred method of attack. The outside centre-backs would keep themselves on the channel side of City’s penetrative runners, making sure they stayed between man and goal as the ball was played in behind. The defensive line also remained compact as the ball went in behind out wide, restricting the space for City to utilise their usual low crosses and cut-backs. Unfortunately, they were unable to find a way through at the opposite end, meaning their strong defensive display counted for nothing on a frustrating afternoon.