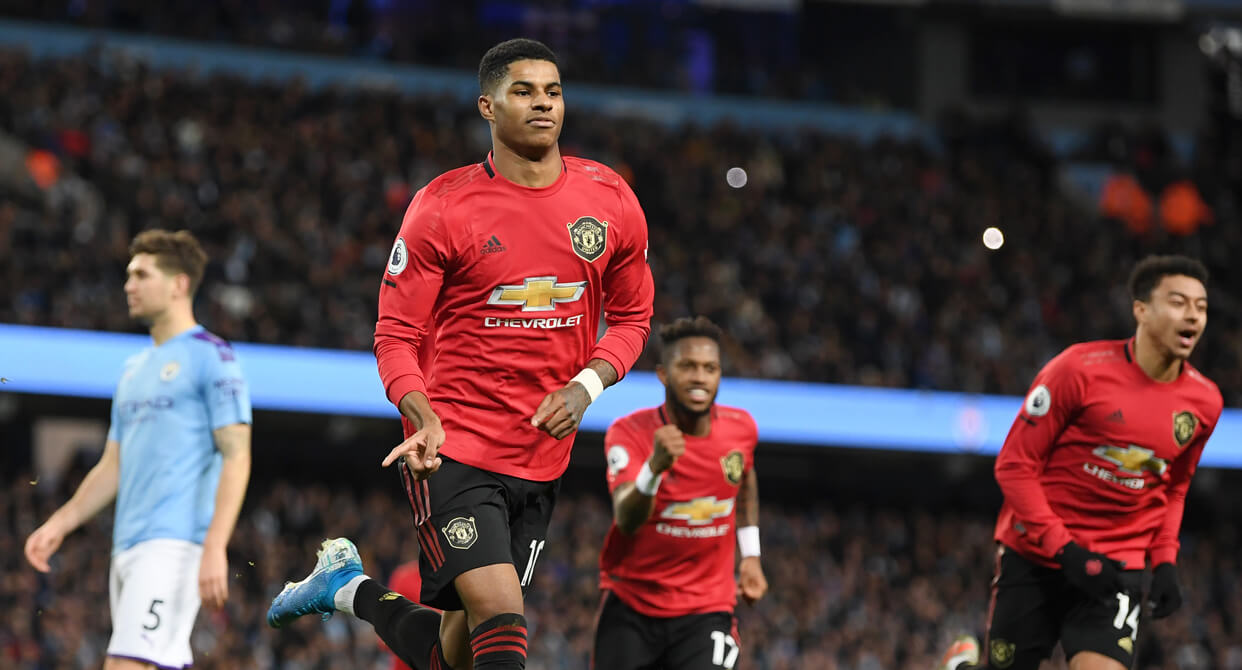 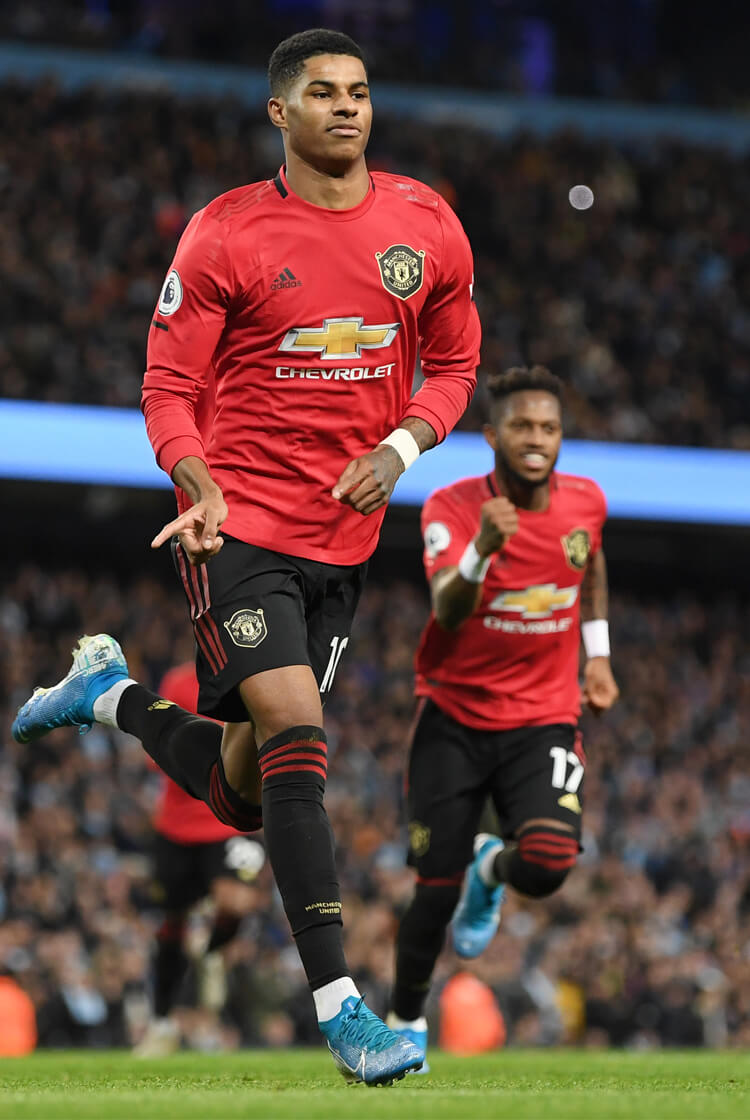 Champions Manchester City fell a full 14 points behind leaders Liverpool as they fell to a hugely damaging home defeat by city rivals Manchester United in the late Saturday kick-off. Pep Guardiola's team dominated possession throughout, but they were consistently susceptible to the pace of United's young attackers on the counter-attack and could have been two down by the time Bernardo Silva brought Marcus Rashford down in the home penalty area halfway through the first half. The England forward got up to calmly stroke home past Ederson, who only six minutes later was beaten at his near post by a shot from Anthony Martial. City improved after the break, but failed to create chances with their usual regularity and had to rely on the unlikely figure of Nicolás Otamendi – a substitute for the injured John Stones – to give them hope with a late header. Ole Gunnar Solskjaer's men held on, however, and are now only five points adrift of fourth-placed Chelsea heading into the busy festive period. 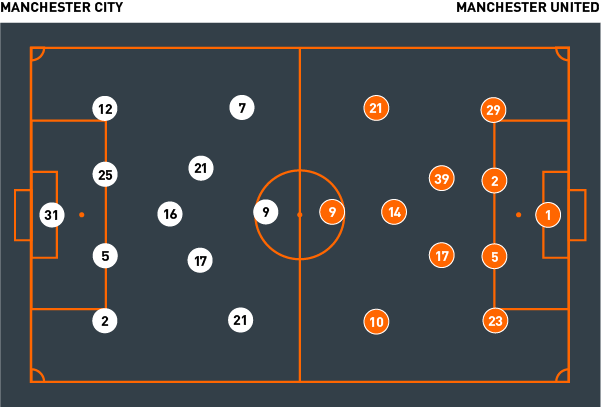 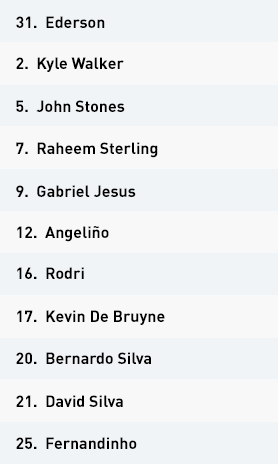 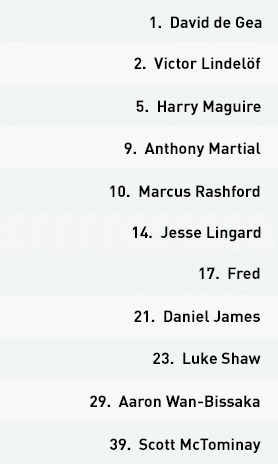 Pep Guardiola set Manchester City up in a 4-1-4-1 attacking formation in possession, with Rodri between the defensive and midfield lines. Bernardo Silva, Kevin De Bruyne, David Silva and Raheem Sterling operated as the attacking midfielders behind central striker Gabriel Jesus.

The hosts had the majority of the possession and were tasked with trying to break down Manchester United’s organised and compact defensive mid-block. The visitors were not interested in pressing City high up the pitch, instead encouraging them to commit players forward and increase the space in behind to exploit in transition. United identified that the attacking central midfielders, De Bruyne and David Silva, were likely to be City’s biggest threats in creating chances; they therefore used their two holding midfielders to mark them as City tried to build, and tried to use Marcus Rashford and Daniel James to screen passes into them.

City’s positional structure as they built was reminiscent of that utilised recently by José Mourinho at Tottenham, whereby one full-back – in this case Angeliño on the left – pushed up to play as a winger while the other, Kyle Walker, remained deep. City used a diamond of security behind the ball as they built, while looking to attack with six players – but they had difficulty in breaking United down and there was an element of predictability about their attacks. They found very little space inside, so they instead circulated possession and tried to unlock the wide areas.


As the ball travelled out to Sterling or Bernardo Silva, they would either look to cut inside or play a diagonal pass behind the United full-back into the half-space for a runner from deep – usually De Bruyne or David Silva – to receive and then cross. United dealt with these situations well, however; and the speed at which they got out to the receiving player meant they managed to block most of these attempted passes and ensured that the City players always received the ball under pressure.

This extended to when City looked to use their wide players to move inside. United would use their full-back and the ball-side central midfielder to block off any spaces that might appear for reverse passes; this forced City to continue moving horizontally with the ball rather than achieving any penetration.

The role of the wide attackers for United out of possession was crucial in allowing the defensive line of four to maintain their compactness and restrict access to the most dangerous areas. This pulled United’s structure into more of a 4-5-1, with close distances between the units to prevent City from playing between the lines.

City tried to combine inside to open up opportunities to penetrate and looked to use the United centre-backs’ willingness to get out to the ball as an area to exploit. They would play inside to an attacker around the edge of the box, enticing Harry Maguire or Victor Lindelöf out before either resetting the pass for a subsequent ball in behind or trying to play it around the corner themselves. The mentality of the United defensive line around the penalty area was that of one determined not to concede, however. Both full-backs and the centre-backs completed a significant number of blocks to deny City from shooting, crossing or playing inside, which led to further frustrations and shots from distance for a home team that simply failed to get the better of United’s defensive organisation and mentality.

Ole Gunnar Solskjaer set his Manchester United team up in a 4-2-3-1 formation in possession, with Daniel James, Jesse Lingard and Marcus Rashford as an attacking trio behind lone striker Anthony Martial and in front of the double pivot of Scott McTominay and Fred. United were happy to concede possession, allowing City to have the ball and mostly looking to play on the counter-attack.

They generally looked to play out to the left side and into the feet of Marcus Rashford, who would frequently look to move inside on to his right foot. The combination of Luke Shaw behind him and Lingard’s runs from the number 10 position created the space for Rashford to attack inside.

The home defenders were much less organised than United’s in terms of dealing with movement and protecting the most important spaces out of possession, and this led to a flurry of United chances in the opening exchanges.

It was clear that United’s threat was in transition; they had several first-half opportunities to take advantage of these situations, but the decision of which direction to play in and the movement ahead of the ball were often lacking. The visitors often played out to their left side, which is where Walker would be defending against the counter-attack – a strange choice, bearing in mind the full-back’s pace. City’s defending around their box was poor, however; the back line was slow to get out to the ball and close United’s players down – as seen for United’s second goal from Martial just before the half-hour mark.

The hosts’ counter-press improved as the game progressed, and it was actually in these situations that they looked as though they may be able to find space to exploit – particularly as United were actively looking to exploit counter-attacking opportunities. This meant that for the initial two or three seconds after City had lost possession, United had started committing players forwards – this opened up gaps, generally behind the full-backs, where City could penetrate if the counter-press was successful. The quality of the visitors’ defence was such that they yielded few chances of genuine quality, however, and held on for a huge win just days after beating Tottenham.