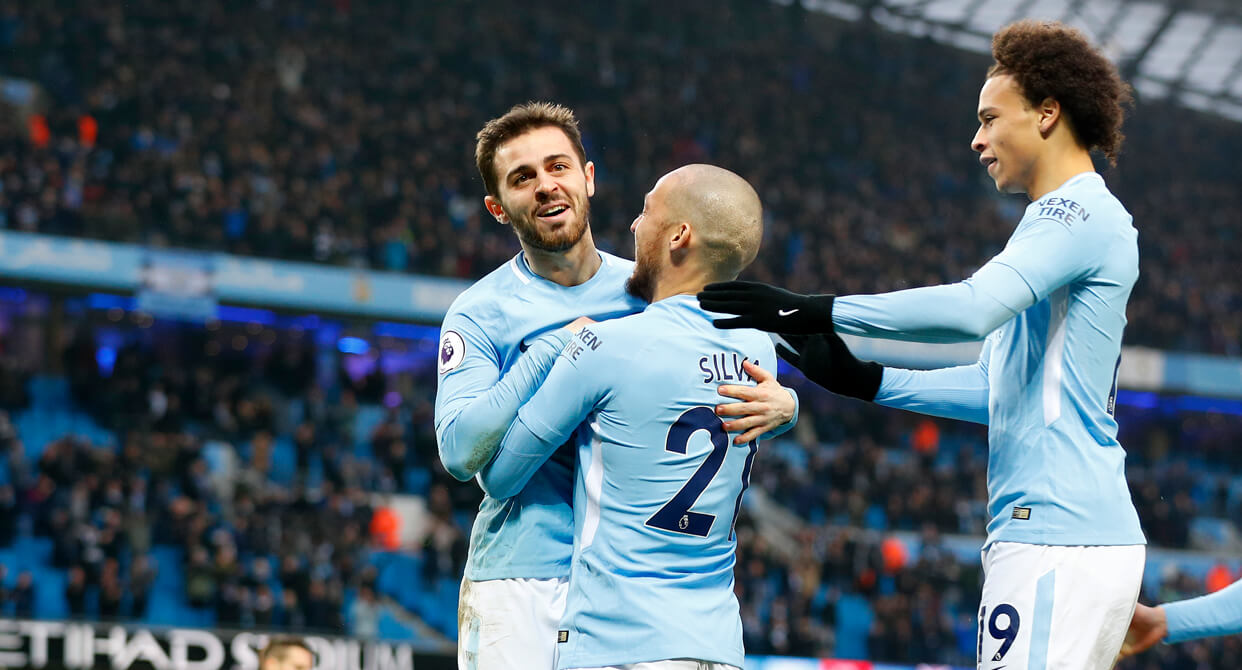 Manchester City strolled one step closer to the Premier League title with this facile 1-0 victory at home to champions Chelsea. Antonio Conte set the visitors up to defend deep and frustrate the hosts, playing Eden Hazard as a lone – and lonely – striker against a City defence that rarely stepped out of first gear. Pep Guardiola's men had to wait until the second half before making the breakthrough that earned all three points, but it came quickly – man of the match David Silva was the architect, crossing for Bernardo Silva to slot home less than a minute after the break. 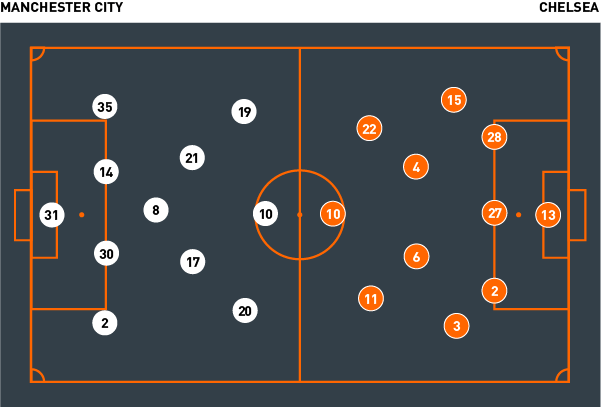 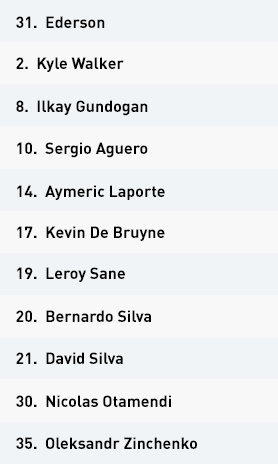 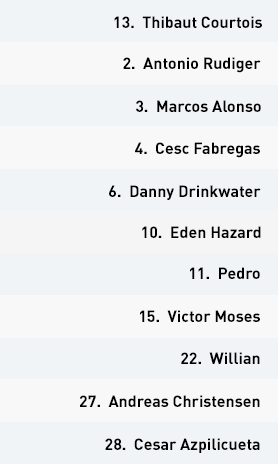 Pep Guardiola’s side adopted a 4-3-3 formation both in attack and in defence. The wingers and the full-backs varied their movements, with the objective of disturbing their opponents and keeping possession. The defenders made it difficult for Chelsea to develop their attacks using their high press, closing down the player who received the ball and marking other potential recipients nearby. Their main objective was to force Antonio Rudiger and Cesar Azpilicueta to play direct into their only outlet, Eden Hazard, knowing that Nicolas Otamendi and Aymeric Laporte would prevail easily in the air, with the defensive midfielder Ilkay Gundogan always ready to pick up the second ball.

The hosts’ defence were never really put under any serious pressure as a result, and with Chelsea defending so deep at the other end the counter-attack never really played any part in the game.

In attack, City had absolute control of the match. They played with great patience, always confident that, through positional play and by dominating the ball in the opposition half, they would eventually find the gaps to exploit in their opponents’ defence. Ederson in goal had no problem playing out from the back, and his defenders reached the halfway line without challenge.

Beyond that, they tried to find Gundogan as the deepest-lying playmaker to filter passes through their defensive unit. This did prove a challenge, with neither Kevin De Bruyne nor David Silva able to regularly find space in central areas behind the line of pressure. In the final third, however, City were able to break in behind Victor Moses and Marcos Alonso out wide, with Chelsea concentrating numbers in the centre. This led to the winning goal, as Gundogan and Sergio Aguero combined to find David Silva in behind Moses; the Spaniard crossed for Bernardo Silva to finally open the scoring.

Antonio Conte’s side started in a 5-4-1 formation, switching to 5-3-2 in the second half after the late introduction of Olivier Giroud. They defended deep inside their own half to try and prevent any spaces from appearing behind their back line, with the aim that the dangerous Manchester City forwards would find it difficult to threaten Thibaut Courtois.

The Blues defended exceptionally deep to try and prevent any spaces from appearing behind their back line. Antonio Conte adopted a very conservative system, focusing on their defensive organisation so that they could stay in the game with the hope of stealing a goal on the break. They tried to make life difficult for City by closing down the central channel, reducing the space for Kevin De Bruyne, David Silva and in particular Sergio Aguero. Andreas Christensen, in the centre of the back three, provided defensive support for his two neighbouring centre-backs when they were busy marking possible receivers. Any gaps subsequently emerged in behind the wing-backs Victor Moses and Marcos Alonso, as shown by the home side’s winning goal.

In what little defensive transition there was, Chelsea dropped back quickly and effectively. They never wanted to concede space in their own half, that the dangerous Man City attackers could exploit on the counter-attack. They also tried to delay any opposition breakaway by amassing players behind the ball or resorting to tactical fouls.

The Blues employed a direct approach in attack, but this was hardly effective given the players they had out on the pitch. Man City closed off all passing options and marked the three centre-backs tightly, with the result that Courtois often launched the ball over the top with no great success. The midfield looked for direct passes into Hazard, but this didn’t work either. They rarely if ever managed to break through the Man City defensive line, with naturally offensive players such as Cesc Fabregas and Pedro mostly anonymous. With attacking options reduced, the visitors failed to generate any danger in the final third of the pitch apart from one occasion when Moses had a slim chance. His shot, like anything else Chelsea tried in the game, did not hit the target.

Manchester City had absolute control of the match in attack. They played with the necessary patience and looked confident that, through intelligent positional play and by dominating the ball in the opposition half, they would find the gaps required to fashion a winner.

Man City nullified Chelsea entirely in their attacking phase. Their effective high press forced the visitors to play direct or make mistakes in their attempts at shorter combination play. Either way, the visitors’ options going forward were consistently limited.

Chelsea defended exceptionally deep to try and prevent any spaces from appearing behind their back line. Antonio Conte adopted a very conservative system, focusing on defensive organisation so that they could stay in the game with the hope of stealing a goal on the break.

Conte opted to start without a recognised centre-forward, leaving both Alvaro Morata and Olivier Giroud on the bench. Eden Hazard, their most advanced player, was largely powerless given the direct approach of his teammates; he had little to do besides help in defence.